Home / Articles / The Thousand and One Connections of Medieval Africa

The Thousand and One Connections of Medieval Africa

Home / Articles / The Thousand and One Connections of Medieval Africa

The Thousand and One Connections of Medieval Africa

Enclosure in ruins in Great Zimbabwe, the former medieval city in Southern Africa dating back to the thirteenth century, which was the centre of the Kingdom of Zimbabwe until the fifteenth century. The kingdom included current-day Zimbabwe and Mozambique.
Omniphoto/UIG / Bridgeman Images
Share
Share
Long seen as being totally isolated, the medieval societies of Sub-Saharan Africa were on the contrary highly connected to one another as well as to other parts of the world, as recently demonstrated by the GlobAfrica research programme.

It is customary to say that history is written by the victors. In Sub-Saharan Africa, this saying could apply to the medieval period, which preceded European imperialism on the continent. The account of this period stretching from the eleventh to the seventeenth century is still largely based on fragmentary and often partisan observations by the first colonisers. Yet simply refuting the notion of an isolated continent through counter-examples is not enough, for historical research now possesses new tools that can document these connections.

While this vision of an “autarkic” medieval Africa is henceforth contradicted by various studies, little research has been conducted on the exact nature of these intercontinental connections. The GlobAfrica programme was launched in 2015 to elucidate the functioning and scope of these past exchanges. Over the course of four years, this interdisciplinary project financed by the French National Research Agency (ANR) brought together fifty researchers from highly different backgrounds including historians, archaeologists, paleobotanists, geneticists, linguists, art historians, geographers, specialists in molecular paleopathology, ethnobotanists, economists, etc.1 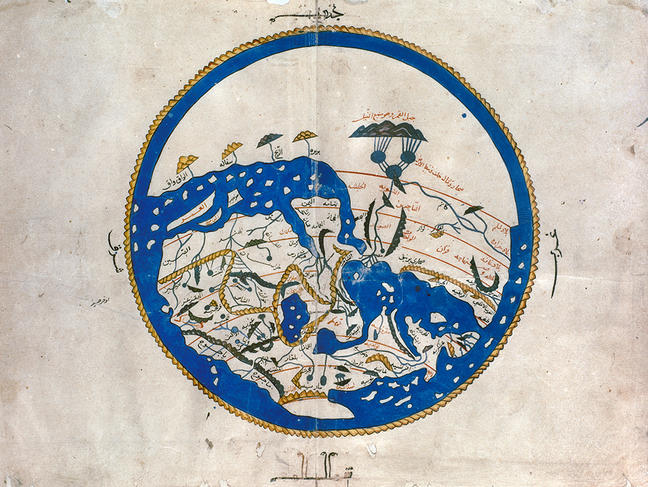 The Al-Idrisi planisphere, named after the Arab geographer Muhammad Al-Idrisi (ca. 1100¬–ca. 1165-1175), was created upon the request of King Roger II of Sicily (1095-1154). It represents the known world during the twelfth century, with the distinctive feature of being oriented South/North. 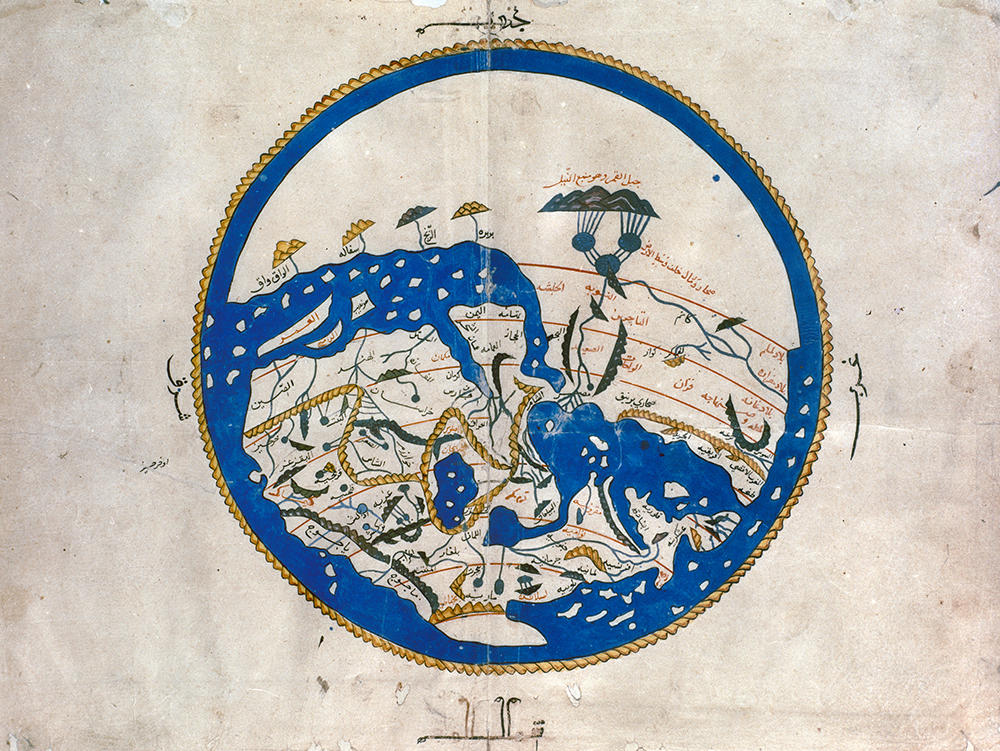 International trade as seen from Africa

“This large-scale project was built upon three case studies that focused on trade, major epidemics, and the appropriation of exogenous plants,” summarises Adrien Delmas, director of the Centre Jacques Berque2 in Rabat (Morocco) and principal coordinator of GlobAfrica. From the eleventh century to the establishment of Portuguese colonies along the coasts of the Indian Ocean in the early sixteenth century, this coastal strip was the theatre of intense trade between Arab, Indian, and Chinese networks and the kingdoms settled in the African highlands.

“While we know that this coastal region was behind the emergence and subsequent spread of Swahili culture, the nature of its relations with political and cultural groups as important as the monarchies of the Great Lakes in Central Africa or Great Zimbabwe in southern Africa still raises questions,” the scientist points out. “Our explorations therefore seek to change the analytical perspective by studying coastal societies from the point of view of the kingdoms in the interior.”

Researchers from the GlobAfrica programme conducted excavation campaigns at little-explored sites in Zimbabwe and Mozambique, such as those of the city of Sofala, which is believed to have been the primary maritime outlet of the Great Zimbabwe Empire.

The study of geological strata from the medieval period has revealed the presence of prestigious artefacts, such as glass beads produced in Southeast Asia and fragments of ceramics from China. These discoveries, which demonstrate the international dimension of the connections between the kingdoms of the continental plateau and the trading posts along the Swahili coast, are confirmed by analyses of accounts by Muslim geographers dating from the late medieval period. Such meticulous work helped to reconstruct a detailed outline of the trade routes that linked the whole of southern Africa with the economic systems of the Indian Ocean.3

The plague as a marker of connections

The second part of GlobAfrica took place 4,000 km to the west, in the region surrounding the Gulf of Guinea. Between 2015 and 2018, four excavation campaigns, conducted by an international team of researchers led by Gérard Chouin, professor of history at the College of William & Mary (US) were organised in the large and prestigious medieval urban complex of Ife, in Nigeria. During the course of this work, archaeologists unearthed a black layer that provided invaluable information on the first half of the fourteenth century. This layer bears witness to the site’s abandonment, which was so sudden that the inhabitants were forced to leave rare and precious objects behind, such as bronze heads whose refinement remains a source of amazement. 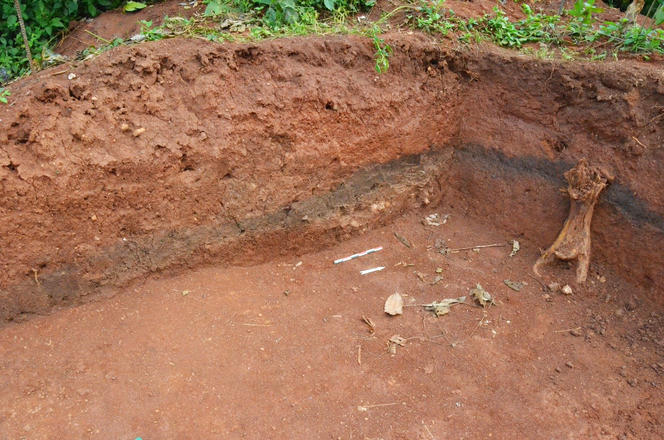 In Ife in 2018, archaeologists discovered a thick black layer that bears witness to the site’s sudden abandonment during the first half of the fourteenth century, perhaps due to an epidemic of the black plague (Mission Archéologique d’Ife-Sungbo). 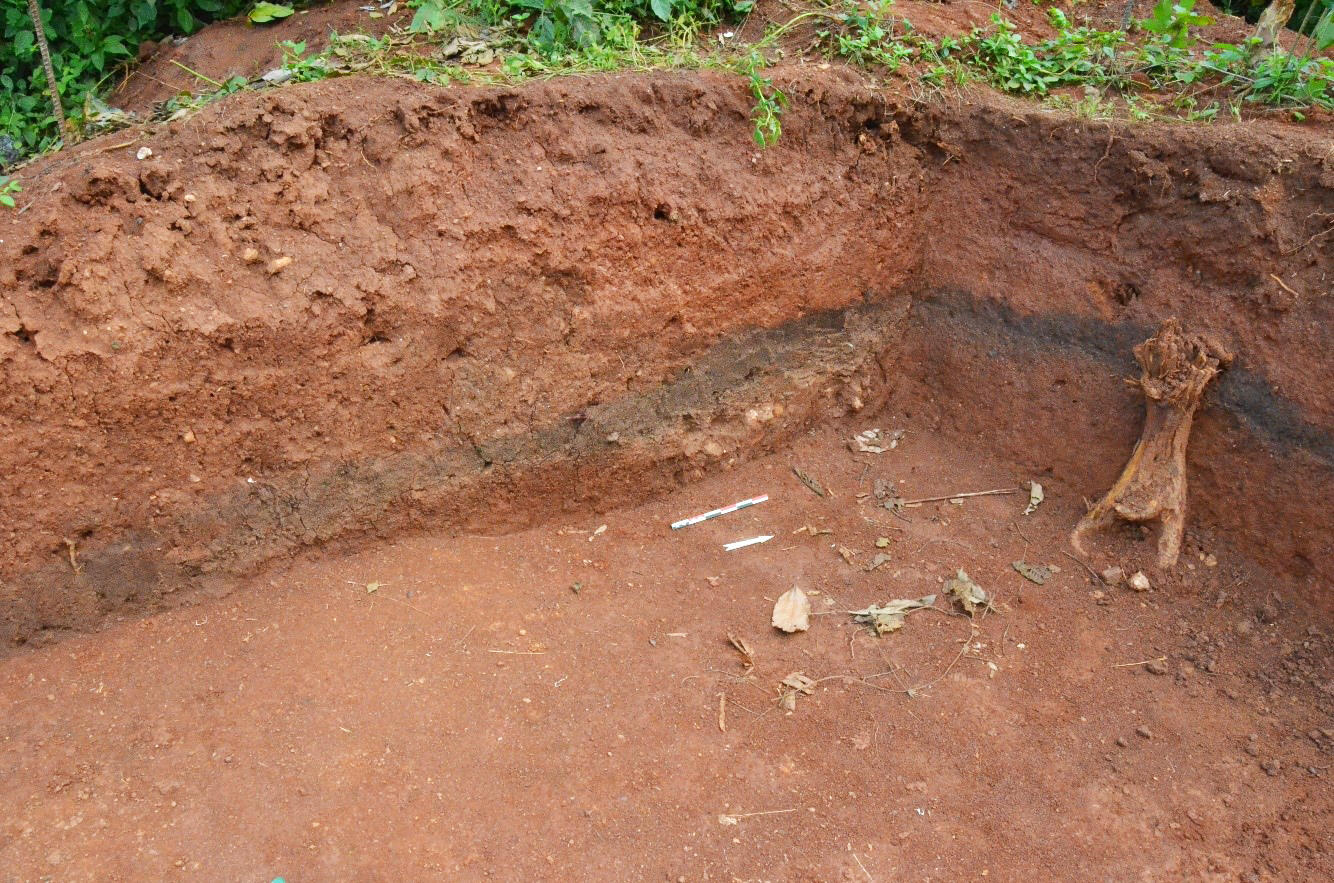 While the ongoing sedimentological study of this geological stratum will help shed light on the event that caused the fall of this important political centre in tropical humid Africa, archaeologists have envisaged a scenario that could explain such a desertion in the absence of traces of armed conflict—namely a major health crisis associated with the black plague. This formidable pandemic, which ravaged a large part of Asia before spreading to Europe in the 14th century, could have reached western Africa through trade.

Other results from the GlobAfrica project agree with this hypothesis. Rereading medieval historic sources has shown for example that during the fifteenth century, two European saints adopted by Ethiopian culture and iconography were already associated with the plague. Yet it was study of the genome of a modern strain of Yersinia pestis—which remained active in eastern Africa for a long time—that established that this strain descended from an older one linked to the plague epidemic that struck Europe as of the 1360s.4 By concentrating on the analysis of human remains from other medieval sites in western Africa, the consortium now hopes to isolate the ancient DNA of Y. pestis, and thereby confirm its bold theory. 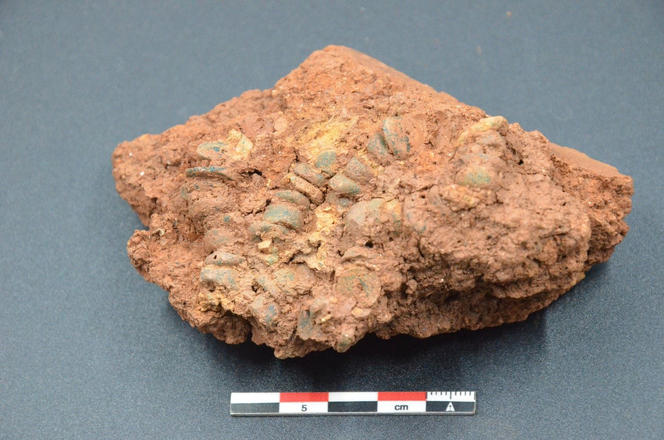 Numerous precious artefacts were suddenly abandoned by inhabitants, as demonstrated by the remains of this glass bead necklace dating from the fourteenth century, found in situ on the floor of a home in Ife. 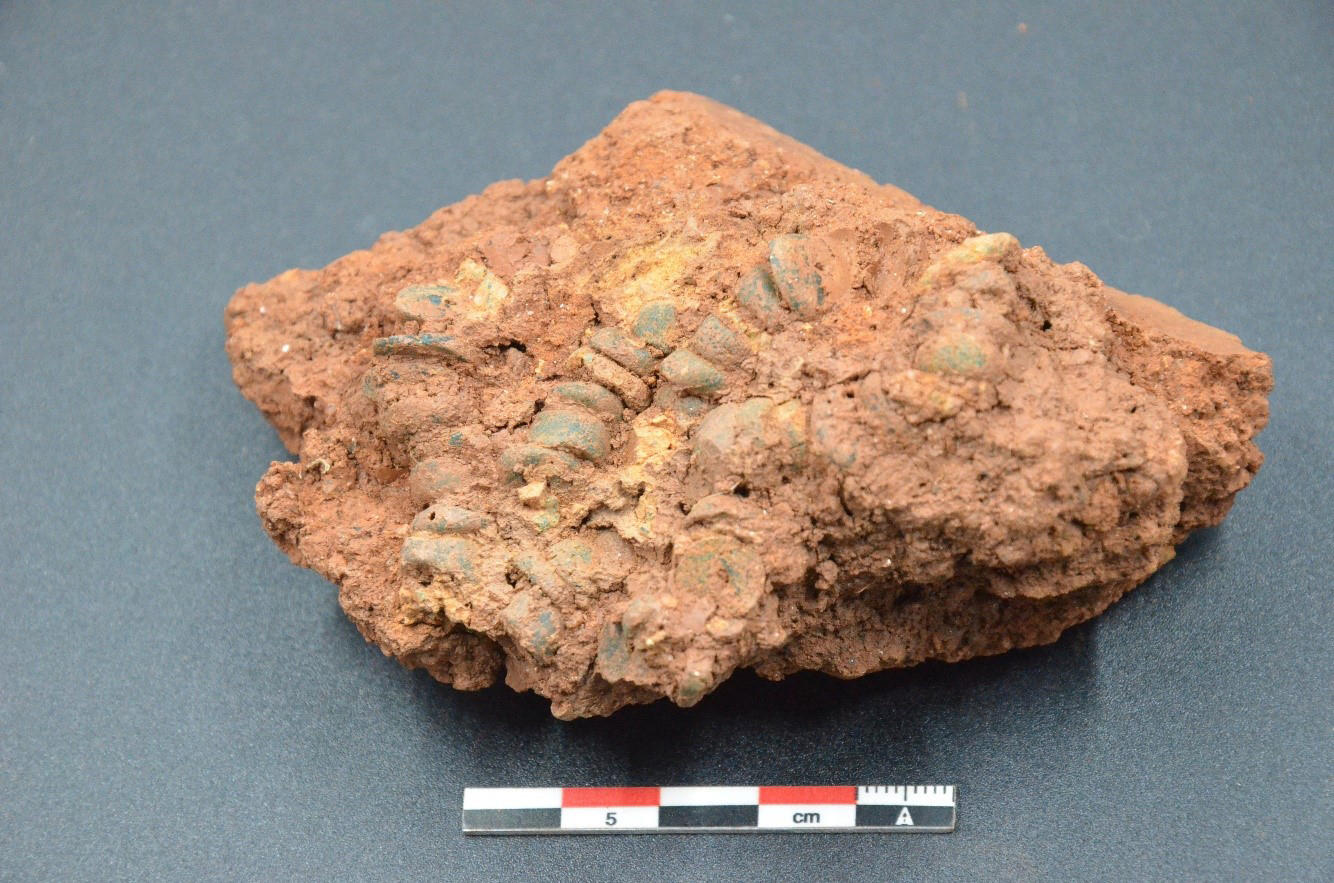 Plants in history: a A retrospective historical analysis

GlobAfrica’s final research focus was the Great Lakes region, in the southern part of the Rift Valley. Its objective was to clarify the role of plants imported from America beginning in the sixteenth century on the economic, social, and cultural organisation of the population centres of this large geographic area. “It is important to note that on the scale of the Great Lakes region, the vast majority of today’s food crops such as sweet potatoes, manioc, corn, beans, peanuts, and chilli peppers all came from the Americas,” points out Christian Thibon, Professor of History at the Université de Pau (southwestern France) and coordinator of this part of the programme.

The original approach adopted for this series of explorations was based on a retrospective form of historical analysis. Relying on the features of the agricultural landscapes of both today and the nineteenth century—in addition to the diversity and intensity of cultivation as well as the distribution of population density—the team endeavoured to reconstruct the evolution of cultivation systems and social structures over the course of the preceding centuries, going as far back as the medieval period.

By going off the beaten track, researchers were able to show that the great diversity of plant varieties grown north of Lake Victoria resulted in particular from intensive trade in seeds, knowledge, and experience between peasant communities, which was conducted at a distance from major communication routes, and outside of any type of political or commercial framework.

The work of the team’s ethnobotanists and linguists on the names of cultivated plants helped uncover two main routes of diffusion for American plant species: from the west following the Congo River Basin, and from the north travelling along the Nile Valley to Lake Victoria.5 These conclusions supplement the current consensus, according to which these plants originated from the eastern coast. “While our research somewhat shakes up the vision of a Great Lakes region led by powerful kingdoms—whose power it should be remembered was reinforced by the colonisers—it strives in particular to recount the history of the stateless societies and forgotten kingdoms that contributed to the rise of this part of Africa through the cultivation of a wide range of exogenous plants,” Christian Thibon sums up.

With GlobAfrica recently completed, there now arises the question of how to develop the body of knowledge that emerged from more than four years of research. This is all the more necessary that the idea of an African history built on national narratives remains firmly anchored. “Even though the need for precolonial history has been expressed across the continent, historical research continues to be sorely lacking in Africa,” Adrien Delmas reminds. The archives and historical, archaeological, and scientific evidence accumulated during the programme are destined to fuel alternative models that can sketch out a more empirical Pan-African history.”

See author's bio
CHEOPS, the Profiler of ExoplanetsPrevious
Innovation and Investment Are a Pressing Need to Fight MalariaNext

Article
Does the Enlightenment still shine in the 21st century?
Africa

Slideshow
A Glimpse of Ancient Africa