A. El Albani
Share
Share
The appearance of mobility in multicellular beings could be much older than we thought. This at least, is what the small fossilised tunnels found in 2.1 billion-year-old rocks in Gabon suggest.

"The galleries are spectacular, absolutely amazing!" enthuses Abderrazak El Albani, who coordinated this research. "But the credit should really go to quality of these rocks, which were able to exceptionally conserve the movement of primitive organisms, and especially to the work of the team," he adds. And there is definitely something to be excited about. This geologist from the IC2MP1 in Poitiers may have altered the timeline of evolution as we know it, pushing back the appearance of mobility among multicellular organisms by around  1.5 billion years. "It’s plausible that these organisms moved to find nutritive elements," he suggests.

And it is this search for nutrients that has been safeguarded in the form of 80 winding galleries—measuring up to 170 mm long and 6 mm wide—through the sedimentary rock of the Franceville fossil site (located in the Haut-Ogooué Province of Gabon, Africa). Through its strata of black shales deposited over 2 billion years ago, this former quarry opens an unprecedented chapter in the evolution of life on Earth. Since the site's discovery, in 2008, its layers of sediment have revealed surprising macroscopic organisms,2 bearing witness to an unexpected ancestral biodiversity: some shapes suggest lobed, elongated, or round bodies of varying size, with some measuring up to a 17 centimeters in size and surrounded by wrinkled sheets. 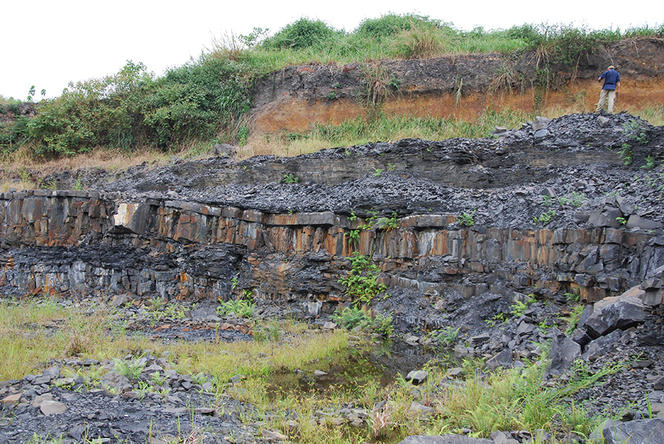 At this fossil site near Franceville, Gabon, fossil remains of an impressive variety of complex colonial organisms have been found in 2.1-billion-year-old sediments. 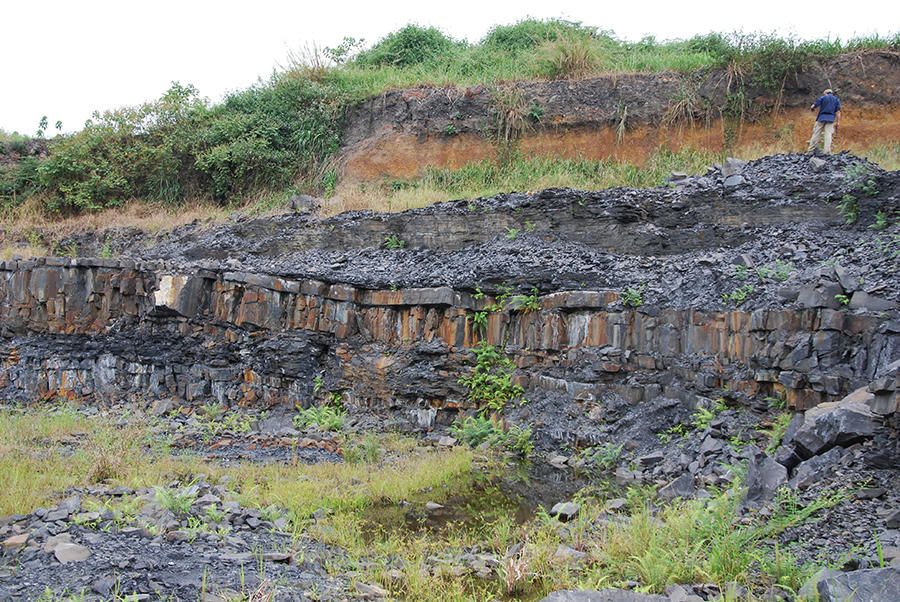 This  multicellular organism—scientists use the term biota—which is now called  "Gabonionta," has continued to puzzle specialists in evolution since its discovery. Until now, the oldest known fossils of multicellular life were 1.8 billion years old (fossilized seaweed discovered in 1992 at the mining site of Marquette, Michigan, US). Those that show the first movement of complex life dated back 580 million years. Yet Gabonionta lived between 2.1 and 2 billion years ago.

By revealing in PNAS3 that some of these organisms were already able to move, the researchers are firing up a second shockwave: "Being able to demonstrate that complex life developed 2.1 billion years ago was already a challenge, but providing evidence that a biological innovation as elaborate as mobility appeared at the same time will definitely trigger a lively debate.”

Yet according to the researchers, the evidence is there, in the form of winding traces and tunnels on and inside the rocks. They suspect that complex and organized multicellular organisms created them by moving through the mud toward their food—probably bacterial veils and areas rich in oxygen. This sea floor environment was calm and shallow at the time, and rich in oxygen following the first wave of the Great Oxygenation Event, which began approximately 300 million years earlier. "The rise in ocean oxygen levels at this time could have played an important role by providing the energy needed for both the metabolism and development of these multicellular organisms, as well as for their movement," El Albani points out. 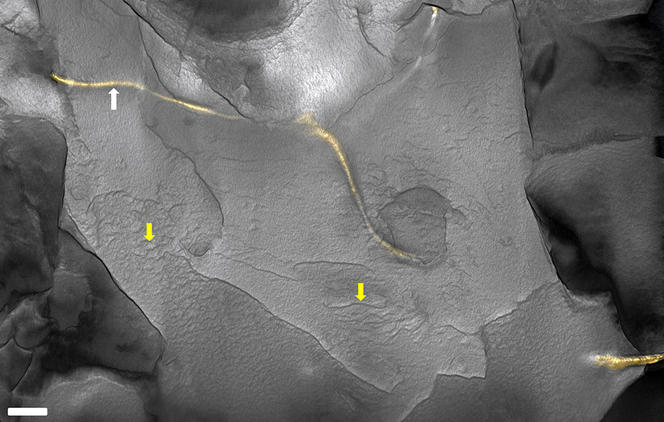 The white arrow indicates the subsinuous trajectory that macroscopic organisms could have followed, a sign of mobility. The yellow arrows indicate the presence of bacterial mats. (Scale bar = 1 cm). 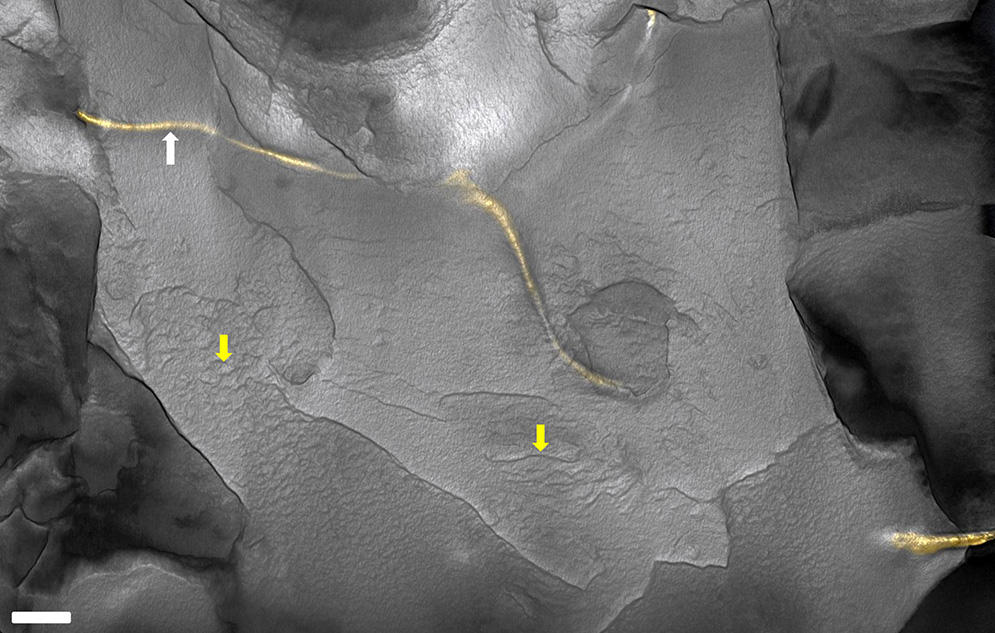 The white arrow indicates the subsinuous trajectory that macroscopic organisms could have followed, a sign of mobility. The yellow arrows indicate the presence of bacterial mats. (Scale bar = 1 cm).
A. El Albani
A. El Albani
Share
Share

It is difficult to determine what these living organisms looked like. "They were possibly similar to colonial amoeba, which when resources grew rare assembled into a kind of slug that could move as a single organism in search of a more favorable environment."

This hypothesis seems reasonable, but certain questions remain: how did these fossilized movements remain intact in the rock for this long?  "The first step was to analyze the biogenecity and syngenecity of these organisms to confirm that these small galleries were indeed hollowed out by living organisms," El Albani explains. A multidisciplinary approach was used to demonstrate that they were biological in nature. First, the researchers performed a chemical analysis of the contents of the fossilized tunnels using an ion probe (which determines the chemical composition of matter). It clearly revealed traces of "permineralization" of organisms.

In other words, organic matter was indeed fossilized in this network of galleries. "It could either be a body that decomposed there, or a mucus left by the organism, similar to a slug’s trail." The researchers also used non-invasive X-ray microtomography techniques to explore the interior and exterior of these galleries in 3D.  "The internal structures of these tunnels also show that they could have resulted only from a biological modification of the rock, and that it was indeed these multicellular organisms that cleared a path through it."

3D animation of traces of mobility of eukaryotic organisms dated 2.1 billion years ago in Gabon.

These organisms admittedly explored the mud, both vertically and horizontally, navigating between blankets of bacteria. Could these traces have been made by bacterial aggregates, which have been present on Earth for 3.5 billion years? "This hypothesis is ruled out by a number of factors, including their shape, 'horizontal and vertical' movements, along with the narrowing of sedimentary lamination and the size of the traces," adds El Albani. 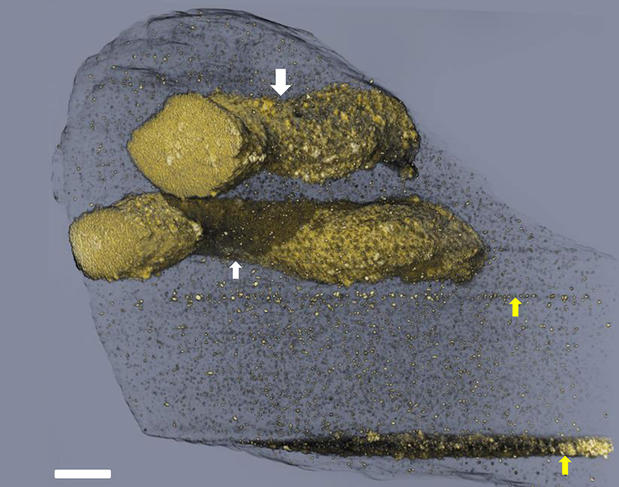 Another evidence of mobility of macroscopic organisms, according to the researchers: a trajectory braided through the rock (white arrow). The yellow arrows indicate the presence of bacterial mats. (Scale bar = 1cm). 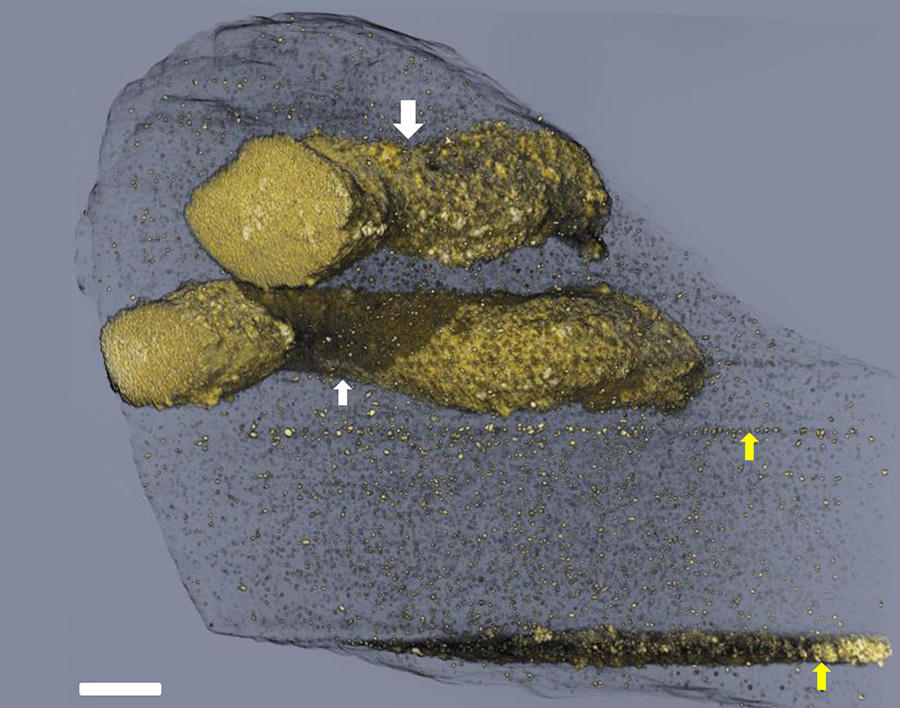 Another evidence of mobility of macroscopic organisms, according to the researchers: a trajectory braided through the rock (white arrow). The yellow arrows indicate the presence of bacterial mats. (Scale bar = 1cm).
A. El Albani
A. El Albani
Share
Share

As a result, these first "explorers" of the sea floor shake up the current storyline for the appearance of complex life on Earth. Until now, the oldest traces of mobility for multicellular organisms only preceded the great evolutionary boom of the Cambrian explosion (approximately 541 million years ago) by a few million years. And over 1.5 billion years separate the biota of Franceville from the Ediacaran biota (discovered in 1868 in the hills of Ediacara in Southern Australia), a harbinger of the massive arrival of animals during the Cambrian. Between the two is a genuine "evolutionary no man's land." It is a period paleontologists ironically call "the Boring Billion."

Could the organisms that were already moving 2.1 billion years ago in the mud of Franceville have spanned this "evolutionary tunnel," thereby serving as precursors for future animals? "It's likely," El Albani continues. "The gradual and overall decline of oxygen in oceans approximately 2 billion years ago, up through the second great glaciation that preceded the Ediacaran, would surely have been fatal for them but they open the way for the next step of emergence of organized and complex life."

Article
Pasteur beyond the legend
Palaeontology

Article
Investigating one of the cradles of humankind
Fossil

Opinion
Flowers Are not Window-Dressing

Article
A Bite into the Past of Extinct Marine Reptiles

Article
Hunting for the Origins of Humankind