Population evacuation model in Grenoble (France) after an earthquake.
Julius Bañgate/ MAGMA-LIG /PACTE/Projet MUDAMO
Share
Share
If disaster is unpredictable, so too is the way that people may react to it. The different psychological factors that make individuals tick has inspired computer scientists to model how people really behave in a crisis—in the hope of boosting our readiness for future calamities.

“Should I stay or should I go?” This is the question that people ask—or should ask—when they find themselves in striking distance of a disaster. Yet as buildings rocked by an earthquake collapse around them, bushfire flames approach, or floodwaters head their way, what a significant number of people will actually do is nothing—regardless of warnings and evacuation orders. “Human behavior in crisis situations is rarely purely rational,” explains computer scientist Carole Adam of the LIG.1 in Grenoble, France. “This means emergency services expecting their instructions to be respected are often in for a surprise.” Not only this, but authorities, suddenly “overloaded with information and compelled to make fast decisions with weighty consequences,” may not be optimally prepared for the crisis on their hands. Unfortunately, the passive response of individuals on the one hand, and the failings of decision-makers on the other, can cost precious lives.

With the aim of drawing lessons from past mistakes, Adam and her colleagues in the LIG’s MAGMA2 team, specialized in modeling complex social systems and group dynamics, study human responses to crises. The team combines psychology, sociology and computer-engineering research to build computer simulations that trace realistic human movements and flows during disasters. Scenarios covered by its current projects include an earthquake in Grenoble, a bushfire in Melbourne, Australia, and flooding on Oléron Island off mainland France.

For the simulations to imitate real-life responses, the team’s first step is to gather data from past events—not just statistics, for example on casualties and rescue services deployed, but also witness testimonies recounting crisis experiences. For as Adam points out, the MAGMA team seeks to make their models more lifelike by “taking into account emotions, cognitive biasesFermerErrors in thinking that have an impact on decision-making. , social attachment and other psychological factors.” Subjective qualitative factors, therefore, that make it difficult for the researchers to “collect enough data at the right level of abstraction to inform the model,” by conducting field questionnaires and surveys. Once the scientists have an adequate data pool, they can design a conceptual model that identifies the relationships between the different actors and elements in a crisis situation. Then, after the model is validated by experts, it is used to develop a simulation program.

Rather than relying on simpler models that homogenize human behavior and translate the movements of all persons by the same physical equation, MAGMA simulations represent humans as multiple autonomous entities. In this way, “models trace the individual behavior of every person (or ‘agent’), and flows emerge from the interactions between these agents,” explains Adam.

Underlying MAGMA’s “multi-agent system” approach is the observation that when disaster occurs, people are swayed by a range of mental states—panic, confusion, resignation, hope, to name just a few—and these myriad emotions in turn prompt diverse responses depending on the individual. Fear, for example, may paralyze one person while whipping another into action. The researcher also identifies the influence of “emotional factors like social attachment: people may prefer to expose themselves to physical danger rather than leave close ones or a familiar place behind.” In the same vein, LIG doctoral student Julius Bañgate is currently exploring the effect of altruism, giving rise to “situations where a person chooses to wait for and help someone slower, or where a parent moves against the general flow to look for a missing child,” illustrates Adam.

Just as there is no set individual response to a crisis, no single crisis model exists either. Instead, the models developed by MAGMA are “specific to each situation,” individualized by various factors. In particular, the type of crisis will prompt different strategies from those under threat. “An important difference between earthquakes and bushfires,” observes Adam by way of example, “lies in the fact that it’s possible to defend one’s house against a bushfire, but not an earthquake, where the aim will be to find out if one’s building risks collapse, and where to go to stay clear of falling debris.” 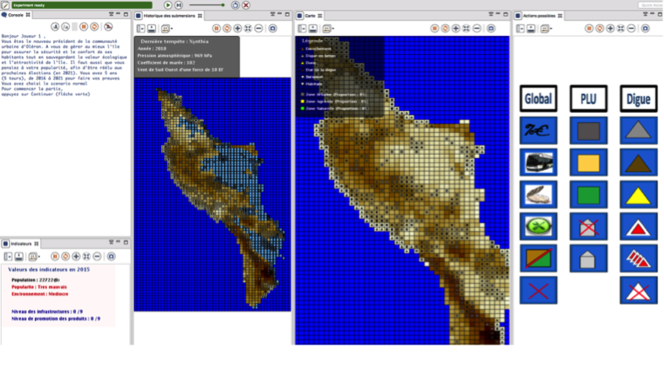 The SPRITE project focuses on modeling a crisis situation resulting from floods on the island of Oléron (France). It features maps of past floods and a current interactive one with possible actions displayed on the right. 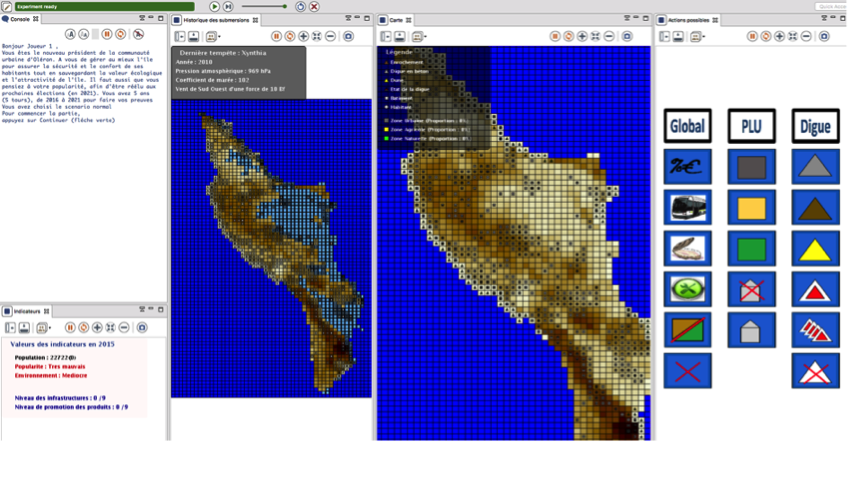 Culture will also mold diverging responses to the same type of threat, as revealed by MAGMA’s field surveys in two earthquake-prone areas: Beirut, Lebanon, and Mendoza, Argentina. “We noted discrepancies due to age, affecting a person’s experience with earthquakes, and also the influence of school preparation drills. Religion is another distinguishing factor: in Beirut, one reason for not evacuating was belief that it would be pointless to fight against an act of God. And social context also plays a role: in Mendoza, the population was more concerned about the level of street crime than physical danger from quakes.”

While MAGMA simulations are fed by data from past catastrophes, the team’s eyes are very much fixed on the future. Indeed, the simulators are developed as preventive tools to stave off avoidable fatalities if a similar situation should arise. The French scientist remarks that “individuals are far more vulnerable when they’re uninformed about risks and the right reflexes to adopt.” To fight this lack of knowledge, the team namely creates awareness-raising serious games3—games with a pedagogical element—in which players can “experiment with the consequences of different actions, and eventually play the different role of another crisis protagonist in order to understand other viewpoints.” But aside from individual awareness-raising, simulations also give communities the hope of more efficient emergency services as they are “a powerful—and economical—means for authorities to test emergency-response policies or communication strategies. With the help of such decision-making aids with adjustable parameters, users can gain simulated experience between the occurrences of real crises—without any danger to human lives,” concludes Adam.