Home / Articles / Modern-day slavery is the exploitation of vulnerability

Modern-day slavery is the exploitation of vulnerability

Home / Articles / Modern-day slavery is the exploitation of vulnerability

Modern-day slavery is the exploitation of vulnerability

A demonstration against modern slavery in London, UK, 14 October, 2017.
Mathew Chattle/ Barcroft Media/ Getty Images
Share
Share
While 10 May marks the commemoration of France’s abolition of slavery in 1848, more than 170 years on, this tragic phenomenon remains a reality. The number of victims worldwide, in the form of forced labour, forced criminality or sexual exploitation, is thought to exceed 40 million. In France, human trafficking is closely linked to the fates of illegal immigrants, who are especially vulnerable to abuse.

On 26 March, 2021, the court of appeal in Versailles (near Paris) sentenced the former Burundian Minister of Justice Gabriel Mpozagara and his wife to a two-year suspended sentence on multiple charges including human trafficking. The couple, while residing in the Paris region, had exploited a man for 15 years, paying him a total of just €5,000. Their conviction stands as a reminder that slavery still exists in France, even though forced labour, imposition of servitude and enslavement have been specified as crimes in the penal code since 2013. When this type of case arises in France, the national committee against modern slavery, the CCEM, acts as the plaintiff.

From the African slave trade to modern-day human trafficking

Thus, 173 years after it was abolished in France, slavery has not disappeared in our country. But what exactly is meant by this term, whose definition and manifestations vary depending on the place and time? “It can be described as forced labour subject to physical coercion,” says historian Myriam Cottias,1 director of the CNRS international research centre on slavery and post-slavery (CIRESC). “It can sometimes be preceded by trafficking, in other words the forced displacement of a population, as was the case with the transatlantic and Indian Ocean slave trades between the 17th and 19th centuries.”

The scientist emphasises in particular how commercial interests redefined the profile of slavery: “While the phenomenon previously existed, from the 15th century, a slave meant an African deported to the Americas to produce colonial commodities, and becoming the property of another person in the process, with no possibility of enfranchisement until the 19th century.” Another characteristic was the racialisation that distinguished whites from blacks based on their status. “This is not so much the case today,” the researcher notes. “There is now real diversity, with people from many different origins being enslaved.”

There are, however, similarities between the victims of the African slave trade and those of modern trafficking: “A slave is completely constrained, coerced in terms of work but also human relations, in particular with regard to the possibility of starting a family. It is someone who is subject to violence and denied an identity. This is still true of victims of trafficking, whose movements are controlled by confiscating their passports.”

Abolition, in principle and in practice

Slave-master relations can be so deeply entrenched in a society’s social and economic fabric that the legal termination of slavery does not necessarily put an end to it. “The practice was ended in France for the first time on 4 February, 1794, and then restored by Napoléon in 1802,” Cottias recounts. “The second abolition in 1848 was very important because it established the equality of all citizens. There were no more masters, no more slaves, and those freed were granted French citizenship. However, although it postulated quite a remarkable egalitarian utopia, it was more an abolition in principle than in practice. In fact, the old ways continued for several decades. The newly-emancipated slaves were compelled to stay and work on the plantations, whose owners refused to pay them wages. The entire system of discrimination also endured, depicting the former masters as civilised and the former slaves as unenlightened.” 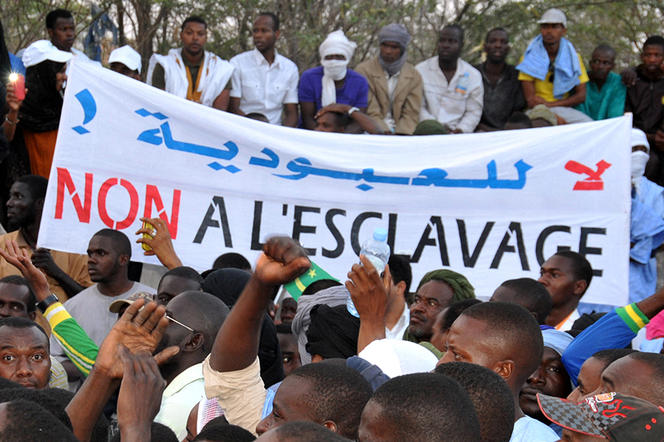 Demonstrators holding a banner proclaiming “No to slavery” at an anti-discrimination protest in Nouakchott, Mauritania, 29 April, 2015. 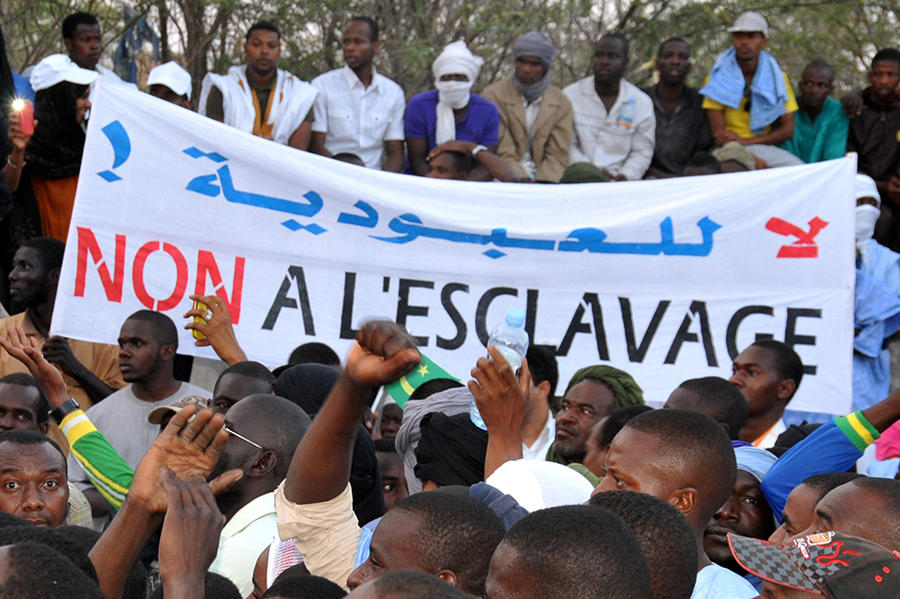 Closer to us, Mauritania provides an equally telling example. “The country has abolished slavery four times,” the historian says. “As long as the ex-slaves are not given the economic means to be emancipated, they remain trapped in a system rooted in enslavement.”

These various factors explain how the phenomenon has survived in the modern era, even though the 1949 Geneva Conventions consider it a crime against humanity. In 2016 the International Labour Organization (ILO) estimated the number of victims of modern slavery at 40.3 million, including 24.9 million victims of forced labour and 15.4 million of forced marriage. Of the 24.9 million people made to work against their will, 16 million were exploited in the private sector, primarily for housework, construction and agriculture, while 4.8 million were subject to sexual exploitation, and 4 million were coerced into labour imposed by public authorities.

Again according to the ILO, one in four victims is a child, and women represent 58 to 99% of the cases of sexual exploitation. Also in 2016, the Free Walk foundation, which posited the figure of 45 million victims of slavery worldwide, assessed their number at more than 18 million in India, the worst affected country, followed by China, Pakistan, Bangladesh, Uzbekistan, North Korea and Russia. 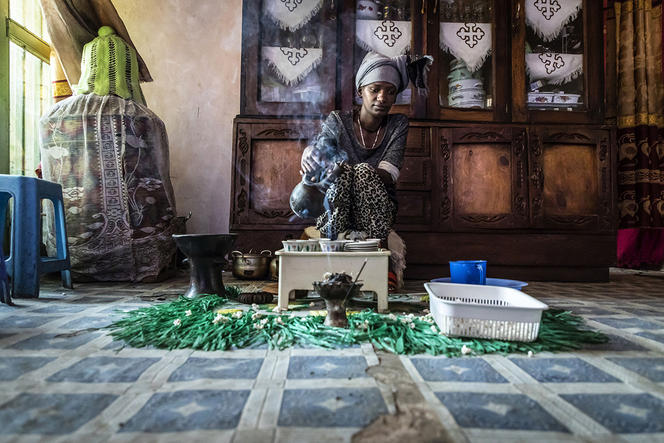 In Ethiopia there is no legal recognition of domestic labour and women working in that sector are rarely paid. 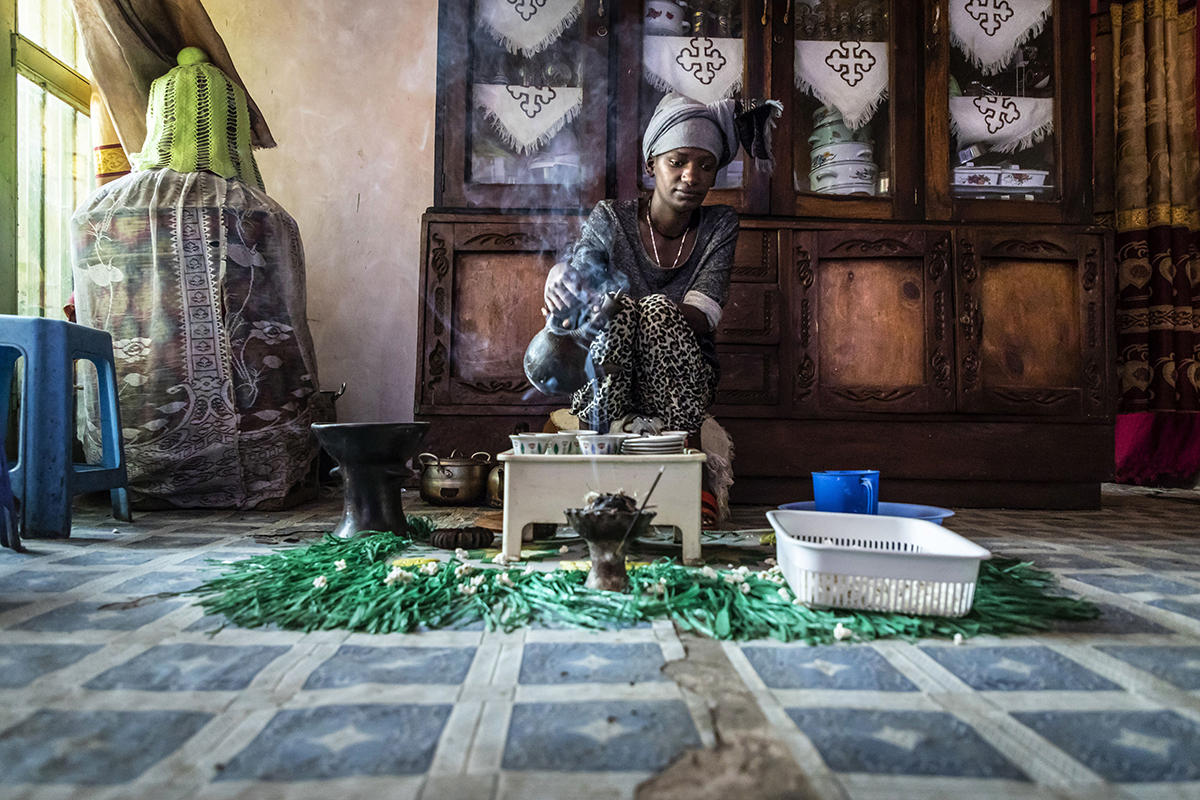 In France, the most recent report by the interministerial mission for protecting women against violence and combating human trafficking (MIPROF), dating from 2019, documented 2,573 victims of trafficking receiving support from non-governmental organisations (NGOs), of whom 75% had fallen prey to sexual exploitation, 19%, 4% and 1% to forced labour, criminality, and begging, respectively, and 1% to other forms of abuse.

Yet these statistics must be analysed with caution. “We know very little about how these figures are established. Do they reflect reality or the specific concerns of public authorities or NGOs?” asks the sociologist Milena Jakšić,2 a CNRS researcher at the ISP,3 who has investigated human trafficking in France, with a focus on sexual exploitation. “The term trafficking – I prefer it to ‘slavery’, which has a moral connotation and a powerful emotional charge – brings to mind sexual exploitation. Understandably so: the image of the vulnerable young woman readily spurs outrage and the desire to take action, whereas forced labour, which affects both men and women, is more closely associated with the idea of the young male migrant, which elicits less compassion.”

Reflecting this psychological conditioning, most of the French NGOs engaged in the fight against human trafficking concentrate on victims of sexual exploitation. “The number of these organisations has risen from 13 in 2017 to 37 in 2020,” Jakšić reports. “Their focus on this phenomenon is frustrating for the NGOs combating forced labour in general, as they find it harder to make themselves heard.”

The figures can also be used to justify governmental policies. “Human trafficking has become a very strong argument for taking action against illegal immigration. But its criminalisation often has negative effects on the individuals concerned,” the sociologist observes. “The control of migration flows places migrants in a situation of vulnerability. In fact, young women are coerced into prostitution because they are indebted to the smugglers.”

Being illegal puts migrants even more at risk. “In their case, it’s not easy to go to the police to report the situation,” Jakšić notes. “All the more so in France, where protection requires the filing of a complaint. The plaintiff must be able to provide proof, before testifying in court and applying for a residence permit, in the hopes of then being able to find, in the best-case scenario, a low-paying job.” 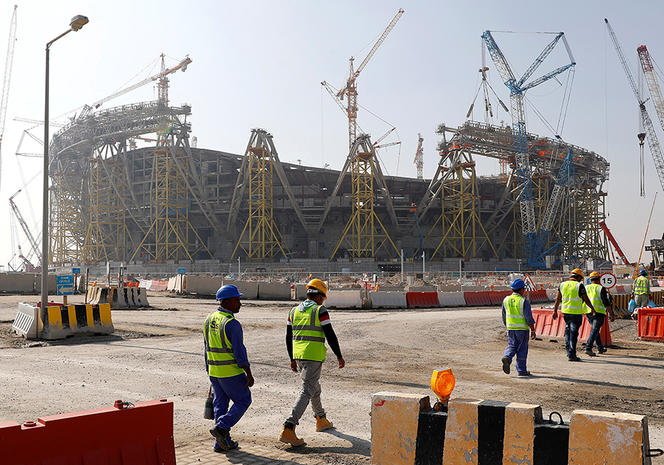 Workers heading to the construction site of Lusail Stadium, being built for the 2022 football World Cup in Doha, Qatar (photo from December 2019). Heavily dependent on foreign labour from India, Sri Lanka, Bangladesh, etc., the country is often criticised for its treatment of “guest workers”. 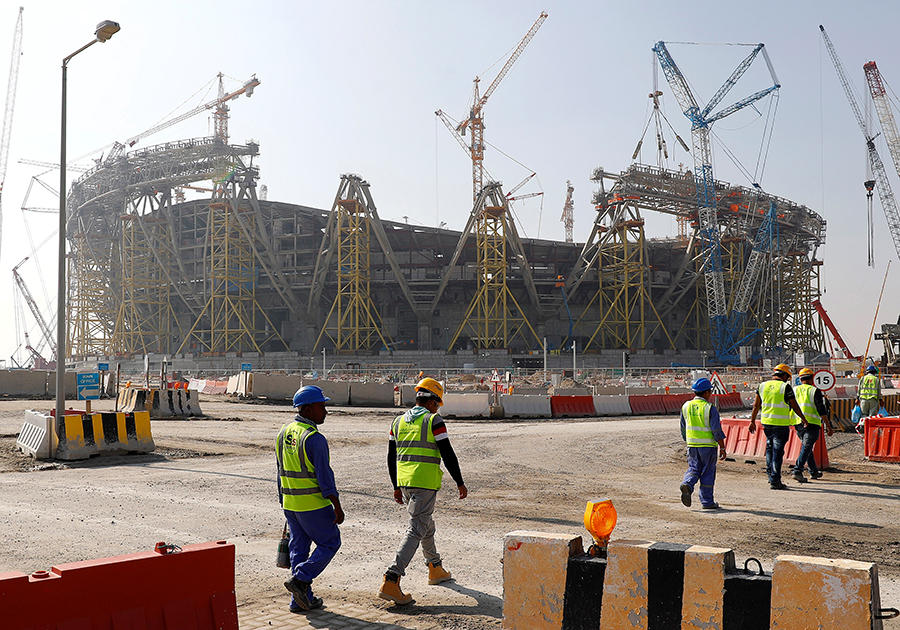 Workers heading to the construction site of Lusail Stadium, being built for the 2022 football World Cup in Doha, Qatar (photo from December 2019). Heavily dependent on foreign labour from India, Sri Lanka, Bangladesh, etc., the country is often criticised for its treatment of “guest workers”.
REUTERS/Kai Pfaffenbach
REUTERS/Kai Pfaffenbach
Share
Share

Many organisations are dedicated to fighting the trade of human beings. They include the International Organization for Migration (IOM), the Group of Experts on Action against Trafficking in Human Beings (GRETA) under the auspices of the European Council, Interpol, and the OCRTEH central office in France. “The problem is that their procedures usually result in the repatriation of the migrants concerned to their country of origin,” Jakšić laments. “The fight against human trafficking becomes a security issue.”

On the other hand, many NGOs, such as the Group providing Information and Support to Immigrants (GISTI) and MIGREUROP, emphasise the fact that human trafficking cannot be considered separately from migratory phenomena. “If we want to prevent illegal activity and put the smugglers out of business, we must allow the free circulation of people,” Jakšić insists. “Since 2014, 20,000 migrants have died crossing the Mediterranean. But instead of investing in the improvement of asylum policies, the European Union has budgeted €21 billion to secure its borders between now and 2027.”

Civic awareness and speaking out

In this security-oriented context, how can victims take control of their lives? In France, the Mission of Intervention and Sensitization against human Trafficking (MIST) is proposing a promising initiative. The organisation was founded in January 2020 to help migrant women who are victims of trafficking to become self-reliant. “They have formed a collective to express their own claims,” Jakšić reports. “They have a podcast in which they talk about their everyday lives as well as their family problems. They tell us that many of them are compelled to become migrants by their families back home, who continue to put pressure on them to send money. This type of initiative is beneficial because these women, by making their story something other than just a tale of victimisation, help us grasp the realities of human trafficking.”

Civic awareness and vigilance can also help combat modern slavery. “We must learn to identify people around us who seem to be under someone else’s control,” Myriam Cottias says. “And we need to remember that if we buy a T-shirt that only costs two euros, it must be a product of forced labour.”

The collapse of Rana Plaza in Bangladesh on 24 April, 2013 revealed to the world the dark side of low-cost manufacturing. On that day, 1,127 workers, toiling under inhuman conditions, died in a building that housed several clothing workshops for international labels, including Mango (Spain) and Primark (Ireland). “Large companies are increasingly encouraged to adopt ethics charters,” Cottias notes. “But even if a multinational like the Swedish giant H&M has indeed signed a charter ensuring fair wages for its workers around the world, it remains to be seen whether the principle is actually applied.”

Article
“Making Decisions is not a Scientist’s Job”
Slavery

Video
The Historians of Slavery

Article
A World within a World