Home / Articles / Why is Italy so Prone to Earthquakes?

Why is Italy so Prone to Earthquakes?

Home / Articles / Why is Italy so Prone to Earthquakes?

Why is Italy so Prone to Earthquakes?

A general view of the town of Amatrice on August 24, 2016 after a powerful earthquake rocked central Italy.
M.ROMANO/NURPHOTO/AFP
Share
Share
On August 24 at 03:36 local time, an earthquake of magnitude 6.2 struck in the central Apennine region of Italy, the scene of many previous earthquakes, particularly in 1997 and 2009. As the toll continues to rise, paleoseismologist Lucilla Benedetti, a specialist of the region, explains this event.

How would you describe the earthquake that has just struck in Italy?
Lucilla Benedetti:1 This is an earthquake that occurred along a ‘normal fault,’ in other words a fault generated by tectonic plates moving apart, in contrast with so-called reverse faults, which result when adjacent plates collide. The entire Apennine mountain range in which the earthquake took place is riddled with very many such normal faults that have been producing tremors for many years. The earthquakes in L’Aquila in 2009 and Assisi in 1997 resulted from normal faults, while that in Ferrara in 2012 was caused by a reverse fault. This section of the Apennine mountain range is currently moving away from the Tyrrhenian and Adriatic plates.

What types of plate dynamics cause this divergence?
L.B: To the south of Sicily, Africa is currently converging northwards at a rate of around 5 to 7 mm each year. Between Africa and the ‘stable’ part of Europe (i.e., continental Europe up to the Alps), all kinds of microplates exist—including the Adriatic microplate, which is rotating counter-clockwise to produce an opening up of the Apennine region. All of the geodesic stations, of which there are very many throughout the Apennines, provide evidence of divergence of about 3 mm per year with respect to the far more stable Tyrrhenian zone. It is in fact the rotation of this Adriatic microplate that is the source of all of these earthquakes—in particular that which occurred in 1980 in Irpinia in the Naples region, and which really alerted Italy to the extent of seismic risk. 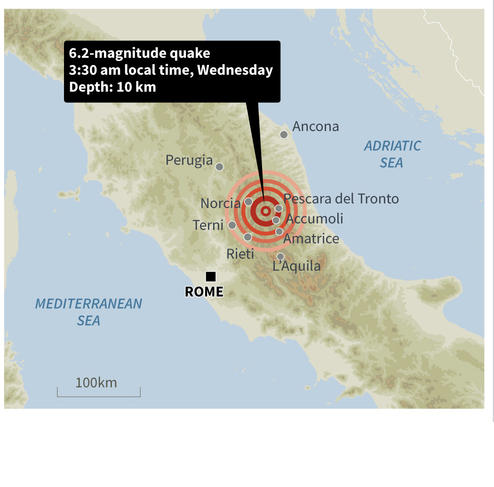 Relief map of Italy locating the epicentre of a 6.2-magnitude quake on Wednesday. 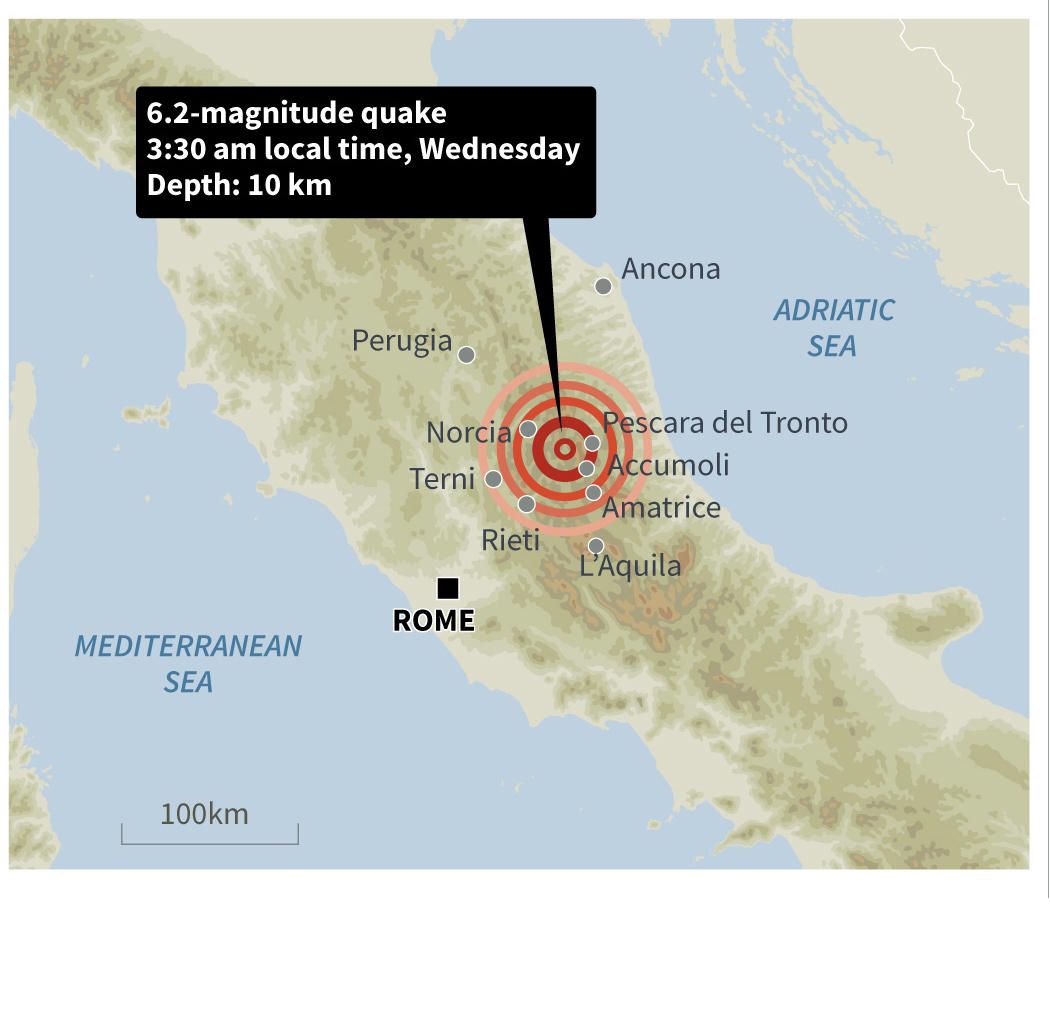 Relief map of Italy locating the epicentre of a 6.2-magnitude quake on Wednesday.
Source USGS/AFP
Source USGS/AFP
Share
Share
It is the 1980 earthquake in Irpinia that really alerted Italy to the extent of seismic risk.

What do we know about the depth and intensity this earthquake, and about aftershock?
L.B: It is an extremely shallow earthquake that occurred at a depth of between 5 and 10 km, which accounts for the extensive damage caused. The epicenter of the main quake was just north of the town of Amatrice, and aftershocks continued to propagate northwards, with many still being recorded, although it is impossible to say whether this pattern will accelerate and whether there will be any further earthquakes to the north. What is now very clear is that the fault along which the rupture occurred is around 20 km long, but it does not appear to extend northwards. However, it could yet spread to another fault further north or further south, although the southern end is fairly close to the rupture that occurred in L’Aquila in 2009. We will have to model the current data in order to determine whether what happened in L’Aquila generated surplus energy along the fault lines that ruptured today.

What is certain is that these faults have continued to rupture one after another along the entire length of the Apennines over the last 1000 years, as attested by the high volume of historical seismic activity on a time scale which, though long in terms of human chronology (every 10-15 years), signals practically instantaneous events on the seismic timescale.

What research has been carried out in the field to better understand these seismic movements?
L.B: Our team has been working for almost 15 years in the central Apennine region. Our objective is to identify past earthquakes that have occurred along all of the small fault lines. We are seeking to map them with extreme accuracy so as to be able to precisely characterize the faults found throughout the landscape before they are able to produce any quakes. In addition, we are taking samples in the field in order to date earthquakes occurring over the last 20,000 years. We have been able to show that in the region to the south of L’Aquila, such earthquakes do not occur regularly, as might have been supposed, but occur in clusters within certain periods: there may thus be activity for a few hundred years in a given zone, followed by nothing over the ensuing few thousand years. 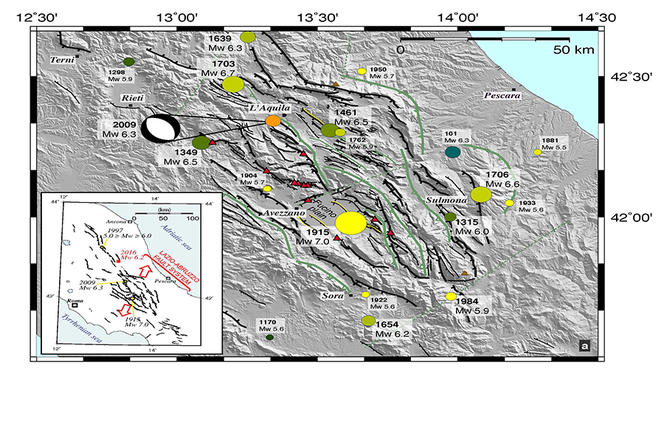 Seismotectonics map of the central Apennine region. Active (black) and ancient (green) fault lines can be seen as well as historial earthquakes of magnitude 5.5 and higher. The faults that ruptured in 1915 and 2009 are also visible (yellow). 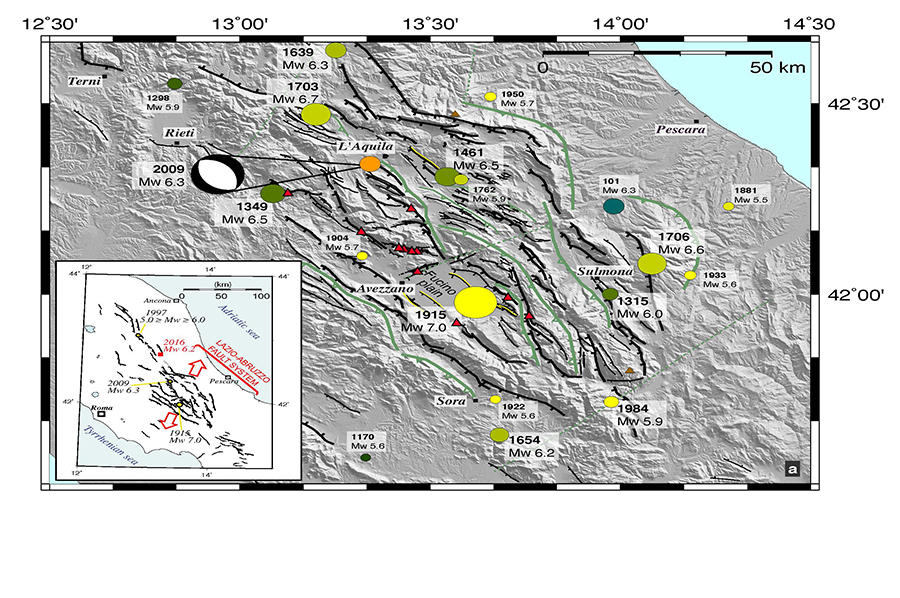 Is this what we are witnessing now?
L.B: Yes, the last 50 years has seen an enormous amount of earthquakes. So are we at the end of a sequence of intense seismic activity or are we in the middle? Is such activity restricted to this particular region or can it be expected to propagate to the north or south? These are the questions we are currently examining. We are working extensively with our Italian colleagues who model this type of seismic sequence over a much shorter time scale—looking 5 or 20 years back. They are attempting to determine whether the earthquake in L’Aquila may have had any bearing on the current zone of seismic activity. For this, they require data on the size of the fault, which are essential to model the potential magnitude of tremors. We are also working a great deal with researchers from the OGS2 in Trieste and the INGV3 in Rome, and from the University of Chieti-Pescara.

We can thus expect aftershocks here too, unless some other event occurs.

How long did the aftershocks last in L’Aquila in 2009?
We recorded strong aftershocks, some of magnitude 5, for around two months, with attenuation over six months. We can thus expect aftershocks here too, unless some other event occurs.

Is it still as difficult to predict earthquakes?
L.B: While we cannot predict quakes, we can certainly be better prepared. The question of predicting earthquakes is of course a central concern for our researchers, and it is what attracts many of us to this field, although I do not honestly believe that we will be able to predict earthquakes within my lifetime. However, all of the data I have mentioned to you are crucial in order to better prepare for such events. It is essential to determine whether the maximum length of fault lines is 20-30 km or 50 km since this tells us the maximum potential magnitude. Is it possible for two 15-km fault segments to rupture at the same time in a single earthquake? We need data about previous earthquakes to answer these questions. We can tell that the fault that has just ruptured is 20 km long, and if our maps are accurate, we can inform the population in this case that the magnitude will not exceed 6.5 or 7, which is an important factor in defining seismic design specifications required for construction.

Speaking of construction, you know the region well, and it is difficult to incorporate seismic engineering into historic towns and villages.
L.B: These towns and villages are 200 years old, and in some cases far older. We can’t tell people to knock down everything in order to construct buildings incorporating seismic design specifications. This issue is extremely complex, since in many cases we have rocky outcrops with magnificent villages leaning against rock faces and mountains. It is clearly impossible to adapt all of these edifices accordingly. However, a number of things can be done, and in fact have been done, since the newer buildings have evidently resisted the quake. And there is another extremely important thing to be done, which is to clearly explain to people that they are living in an area at risk of earthquake. We are currently focusing very intently on the connections between science and society in order to pass on what we know to the local populations, which is something we have not always done in the past. We also have plans for a project under the auspices of a Labex (OT-Med) in which we will be working with local populations to encourage people to tell us about their living conditions in this region, and to make any improvements we can regarding the entire question of land management and development.

Video
In Botswana, an amazing stream in the desert
seismology