Sebastien CALVET/REA
Share
Share
What is the impact of algorithmic recommendations on the diversity of the music being streamed? Using data made available by Deezer, the researchers of the Records project have formulated an initial detailed view of the question.

Music streaming sites offer their users access to libraries containing tens of millions of tracks. In order to navigate these inexhaustible catalogues, algorithms generate suggestions based on each user’s listening history. However, does this run the risk of isolating them in an overly familiar “bubble”, a sort of echo chamber in which they are exposed to the same tastes over and over again? The question has been extensively examined and discussed in the context of political content on the social networks, but little research has been done from the point of view of culture and music.

The Records1 project has set out to fill this gap, bringing together researchers in the social sciences as well as computer science to analyse massive amounts of data provided by streaming services. The Deezer website contributes to the undertaking by providing the team with anonymous listening histories of its users.

“Sociologists usually work with declarative surveys, which creates recurrent problems of reliability,” says Philippe Coulangeon, a sociologist specialising in cultural practices and tastes at the OSC.2 “Just as in politics, people alter their responses depending on what they think should be highlighted.” In contrast, the researchers of the Records project have the benefit of high-quality information, and are spared the tedious task of seeking out the indirect traces of Internet users’ activity. 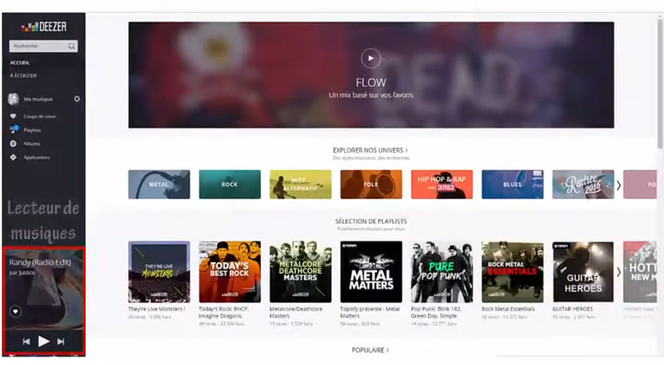 The researchers investigated the different options for streaming music on Deezer: in “flow” mode, depending on the tracks already played, or via playlists compiled by other users or the platform’s staff, in some cases assisted by algorithms. 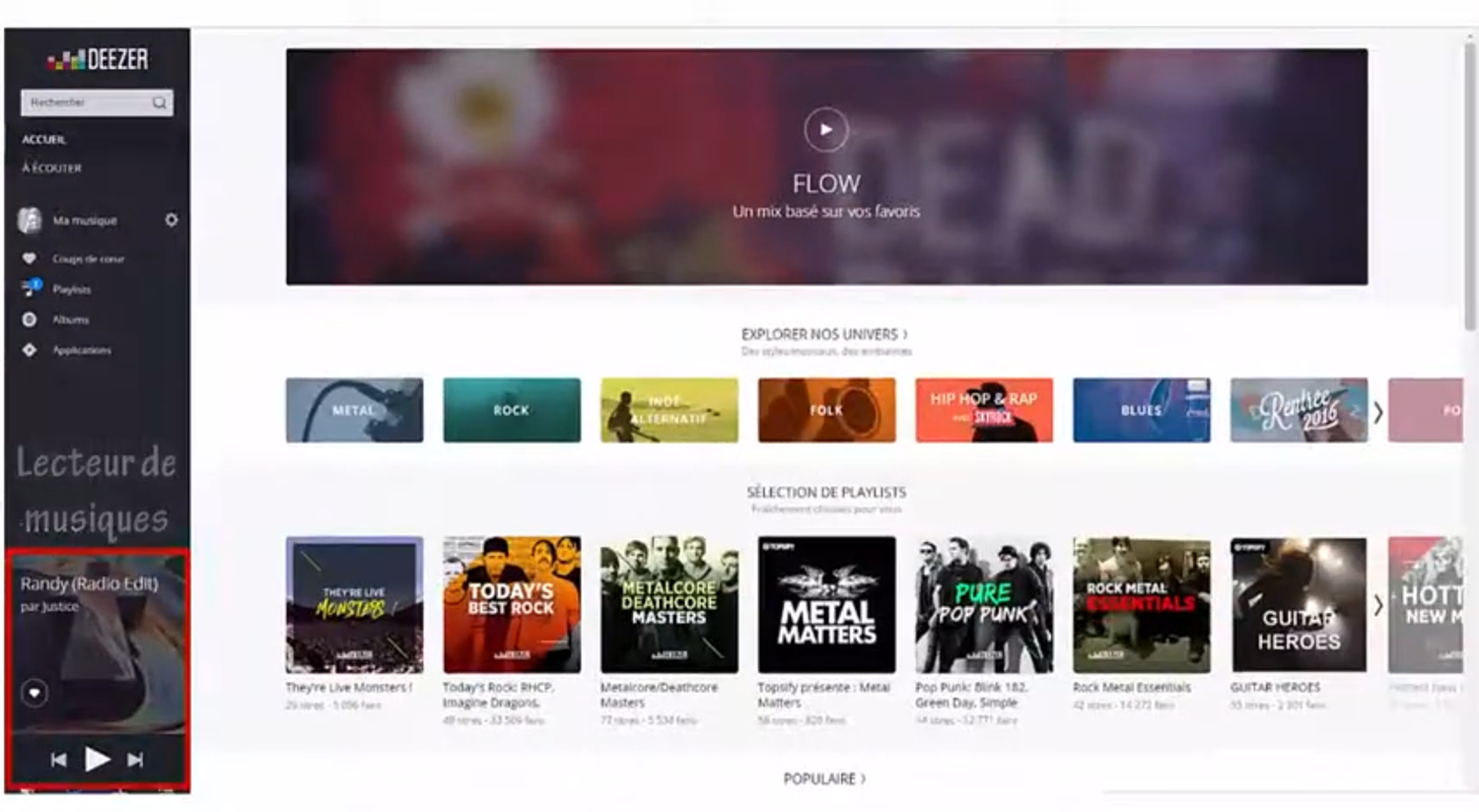 The researchers investigated the different options for streaming music on Deezer: in “flow” mode, depending on the tracks already played, or via playlists compiled by other users or the platform’s staff, in some cases assisted by algorithms.
Deezer
Deezer
Share
Share

“This data allows us to compare what happens depending on whether or not a user follows the algorithms’ recommendations,” explains Camille Roth, a CNRS researcher at the Centre Marc Bloch3 specialising in both the social sciences, mathematics and computer science. “I check whether ‘echo chambers’ are being created, how information is distributed depending on the form of the listener’s interactions with the algorithms, and whether any broad user categories can be identified.”

Stuck in a filter bubble?

Unlike the social networks, the use of streaming sites is more of a solitary activity, and users seem to be more involved in choosing the content to which they are exposed. Social interactions may exist, but they are much less developed. In this context, how prevalent are the famous “filter bubbles”, the mechanisms that supposedly isolate Internet users by proposing excessively similar recommendations?

“The Records group’s work reverses the usual point of view on the role of algorithms in the formation of filter bubbles,” Roth emphasises. “Instead of checking whether a recommendation affects a user’s behaviour, we study how the user deals with it. We have learned that there are different attitudes, and that the impact of the recommendation and its filtering effect varies accordingly. Regarding the question of filter bubbles on the Internet, it is essential to distinguish between various categories of users.” 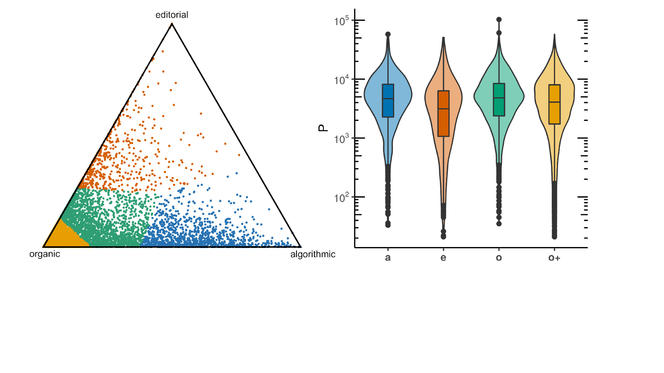 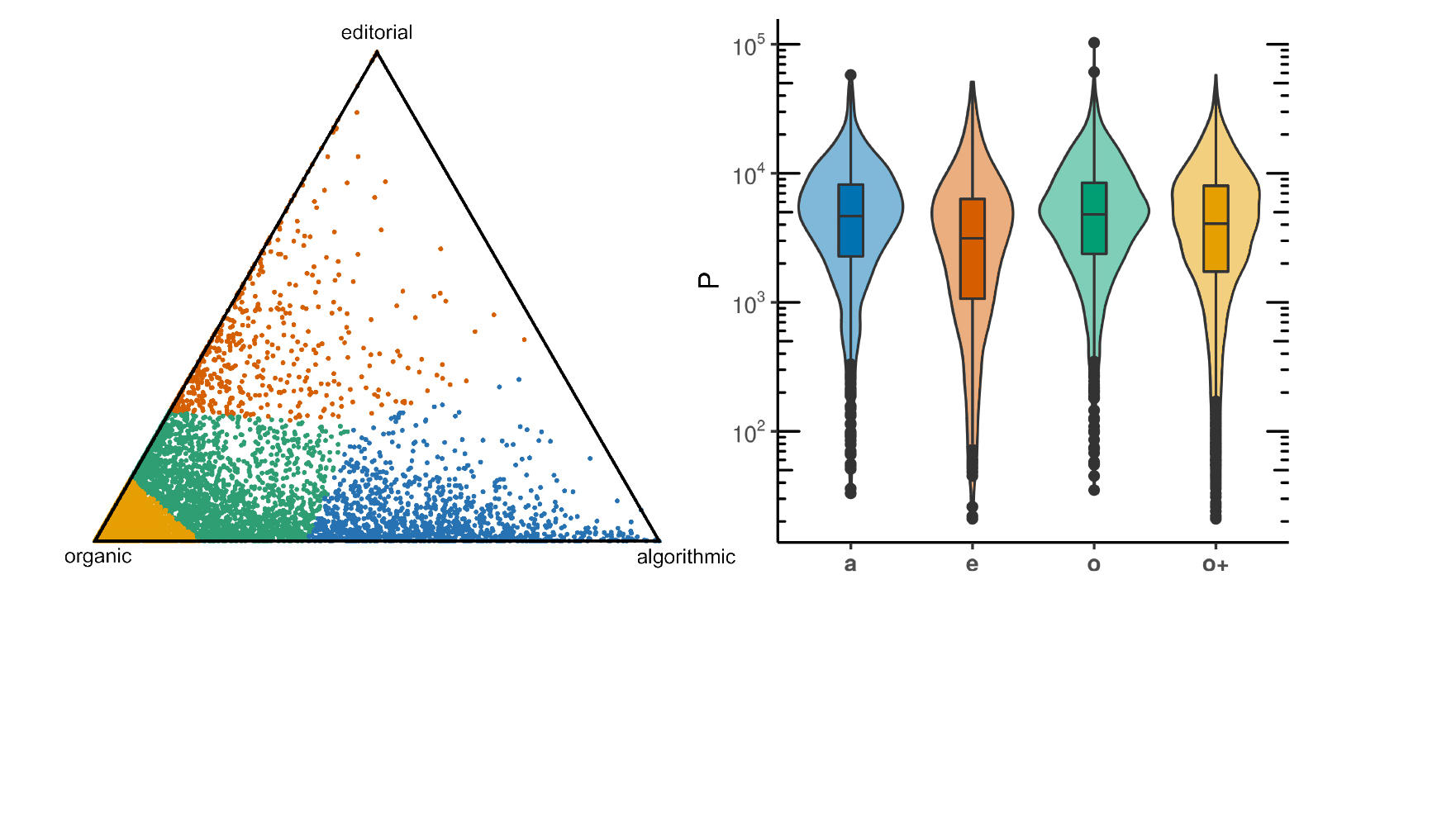 In fact, some listeners use streaming sites as a personal library that plays only music that they have personally chosen. Others use them more like a radio, leaving more or less room for randomness and discovery. Two basic scenarios emerge: listeners rely either on recommendations managed solely by artificial intelligence and based on their listening history, or on so-called “editorial” recommendations in the form of public playlists compiled by other users or by streaming platform staff, often with a specific theme and sometimes assisted by algorithms.

Streaming service users can thus be represented schematically in a triangle whose three corners are: “organic” listeners who follow no recommendations, listeners who rely mainly on algorithmic recommendations, and listeners who prefer editorial recommendations. The researchers have studied the diversity of listening within these user categories, in other words the quantity and repetition rates of the songs played, as well as their overall popularity. Musical genres, on the other hand, were not taken into account for this study.

Indeed, “We shouldn’t give too much credence to musical style labels – they’re based on arbitrary decisions, especially in the case of the most popular artists,” insists Manuel Moussallam, a senior researcher at Deezer, where he has worked for the past eight years after earning a PhD in musical signal processing. “In our work, classifying Maître Gims as pop or rap can have a huge impact on the results.”

Consequently, the Records project decided to assess diversity according to two criteria: first, the relation between the number of different tracks played and the total number of plays, and secondly the overall popularity of the songs in question. The behaviour of the three main user groups could then be compared to the playlists of some 30 highly-rated French radio stations.

The results showed that users who often follow the Deezer algorithm hear a wider variety of music, less popular than on most FM music stations, whereas those who privilege editorial recommendations are more focused on successful artists.

What do users want?

“Our analyses have led us to eliminate the theories according to which automated recommendations systematically limit users’ choices, or on the contrary guarantee exposure to a wider variety of content, including less popular artists,” explains Thomas Louail, a CNRS researcher at the Géographie-Cités laboratory.4 “The measurements show great diversity from one group to another in the use of these tools and the resulting effects. But at this stage we know nothing about listeners’ expectations, nor about the contexts in which they use these tools – nor about the users themselves, for that matter. Our survey mechanism, which combines an analysis of listening histories with a questionnaire as well as in-depth individual interviews, will enlighten us on these points.”

Since the data from Deezer is strictly anonymous, it includes no demographic or social information other than the gender and age declared by each user when creating an account. “These results are also pertinent to another question, namely to what extent today’s main cultural divide concerns not so much the difference between serious art music and its popular counterpart, but rather access to a wide diversity of repertoires,” Coulangeon concludes. “We can already see indications of that here, but more work needs to be done.”

To find out more The Records project website: https://records.huma-num.fr

Article
“Making Decisions is not a Scientist’s Job”