A World Without Work: Six Scenarios

A World Without Work: Six Scenarios

Image taken from the TV series “Trepalium” (2016). In this show set in the future, only one person in five has a job and lives in the City, which is surrounded by a protective wall.
ARTE France/KELIJA
Share
Share
Machines will one day be able to carry out all tasks currently performed by humans. We asked the economist Gilles Saint-Paul to describe six possible futures for the 22nd century.

Let us imagine that 150 years from now, work done by humans is less competitive than the equivalent done by robots, which are inexpensive, continuously at our beck and call, and fully accepted by the population. “In this scenario, it is important to understand that we have now left behind the system in place since the Industrial Revolution. In the former scenario, machine-tools served to improve the productivity of workers but not to replace them; this process increased productivity, enabling companies to employ workers and to raise their salaries. Such a system ultimately serves both workers and society in general,” explains Gilles Saint-Paul, researcher at the Paris-Jourdan Sciences Économiques Unit.1 However, if such machines operate unassisted, they enter into direct competition with human workers. This takes us into a scenario in which capital is substituted for labor: at this point, salaries are determined by the productivity and manufacturing costs of robots. “Imagine that you are filling up boxes and that you can fill 20 per hour,” suggests the economist by way of example. “If a robot that costs €10 per hour to operate can fill twice as many as you, your hourly salary will now be only €5.” Abject poverty.

If this robot is further tweaked and can now fill 80 boxes per hour, your salary will be halved again.

It gets worse: “If this robot is further tweaked and can now fill 80 boxes per hour, your salary will be halved again.” Humans will thus no longer be able to live by their labor. And taxing robots, something that is already widely done throughout all sectors in different countries, now becomes economically viable, and even necessary (editor’s note: in contrast with the current recommendations of economists for the near future). Based on these conditions, Saint-Paul has drawn up six scenarios for tomorrow’s world.2 Any resemblance to current events is purely coincidental… 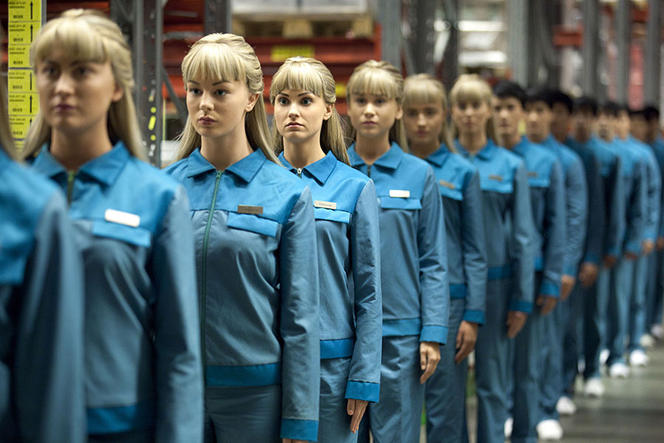 If in the future robots were able to work quasi-autonomously like those in the TV series “Real Humans,” they would enter into direct competition with human workers... 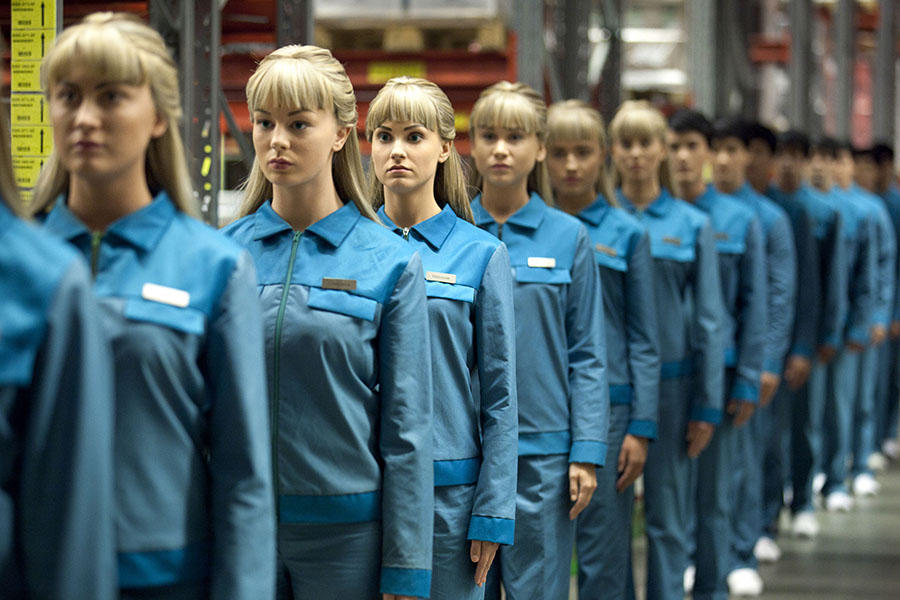 The fruits of the labor of these machines are redistributed to the population via the Welfare State, whose coffers are filled by taxation on the owners of the robots (in other words, the owners of the capital). This social-democratic scenario could readily be introduced in a democratic society: if the salary of the majority of citizens falls below subsistence level, the latter could indeed vote massively in favor of taxation that maximizes state revenue. “In this case, the capitalists, who are very few in number, live off the labor supplied by the machines while the others live off social transfers,” sums up Saint-Paul. “The French and Greeks, who save relatively little in comparison with their German counterparts, and who have a strong redistributive state, could head towards this type of scenario. However, factories with no human labor would be extremely easy to delocalize.” Taxing the owners of robots in this case would thus provide no guaranteed income.

2 – A society of rentiers

In this possible extension of the preceding scenario, some citizens save from their providential income and pass on an inheritance to their children, and new dynasties of rentiers subsequently emerge. The greater their number, the stronger their growth since inherited wealth forms a new source of savings (which is effectively loaned by the banks to companies investing in robots for production). If such a class of rentiers, owning capital and opposed to redistribution, reaches critical mass, the welfare state will gradually disappear due to lack of political support. Ultimately, society will be divided into two major castes: on the one hand, moderately well-off rentiers, and on the other, a sub-proletariat condemned to destitution who, in the absence of inherited wealth or adequate revenue from the state, will no longer be able to offer any means by which their own descendants might one day become rentiers. “The Germans, who save a great deal, could progress to this type of scenario,” comments Saint-Paul.

3 – A new generation of Fordism 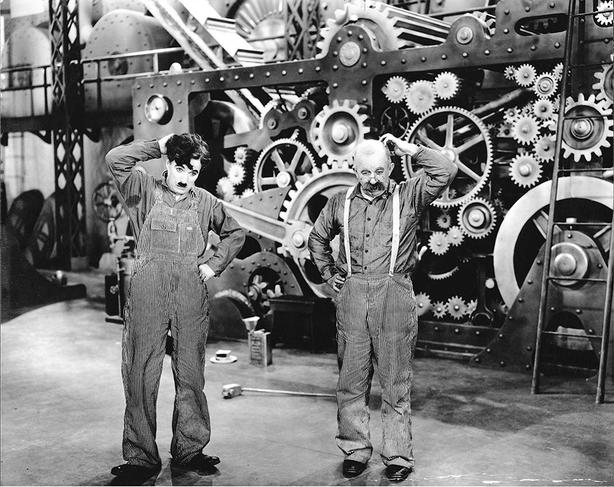 Image taken from the film “Modern Times” (1936), an iconic vision of the automated factory work and assembly lines behind Henry Ford’s success in the automobile industry. 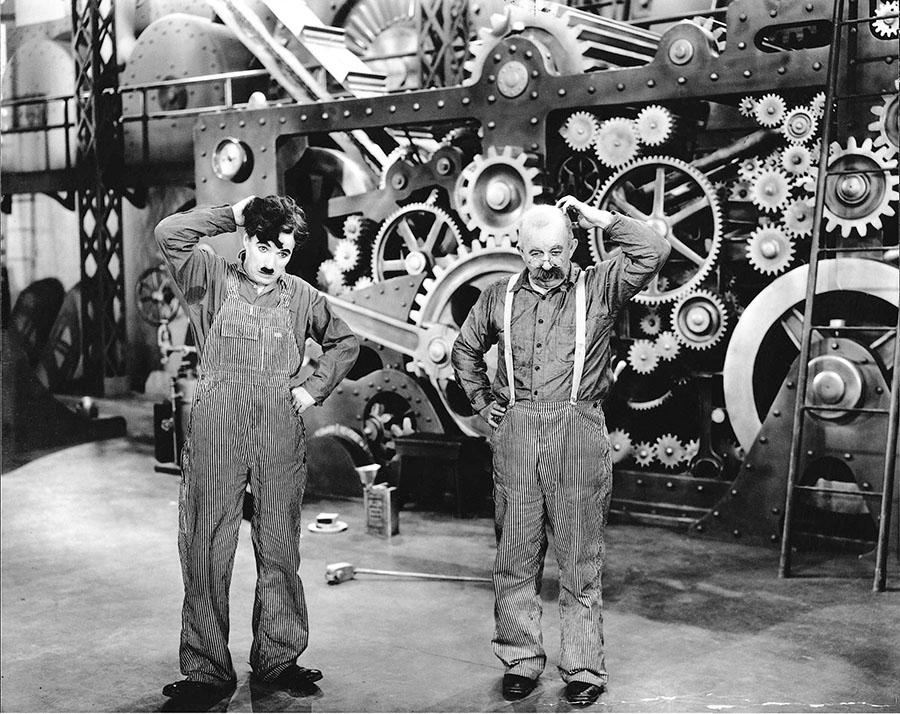 In order to ensure a consumer base and some degree of social harmony, companies continue to provide humans with jobs that serve little purpose but are well paid. Providing money with one hand to win future clients with the other is not a new idea: the car maker Henry Ford made millions from this approach at the start of the 20th century. The 1960s then saw the emergence of new intermediate managerial categories, the “executives,” with a marked penchant for Formica furniture and hi-fi sets. “In my neo-Fordian scenario, people earn high revenues for purely formal jobs within a make-believe productive hierarchy. They make largely irrelevant Powerpoint presentations and they regularly attend long, pointless meetings…,” says Saint-Paul.

“At the end of the chain, a hypertrophied tertiary sector underpins the redistribution mechanism while upstream, the capital is produced by factories employing only robots.” But there is a problem: the Fordian model was inherently unstable since there was no way of ensuring that the generously-paid employees would opt for the famous T-Model over a cheap Chevrolet. “This is true,” continues the economist, “but under a form of capitalism based on prices and salary levels preset by a small cartel of major companies dividing the entire market among them, neo-Fordism would manage to survive.” Based on today’s digital economy, highly concentrated around FAMGA, this hypothesis is entirely plausible.

4 – The Roman Empire strikes back

To avoid paying high taxes within a possible welfare state, the handful of extremely rich robot owners set up their own redistribution system based on clientelism. They transfer some subsidies to the people in exchange for their political support. This redistribution system passes through neither state nor company. “Society then becomes a variant of that under the Roman Empire, in which robots take on the role of slaves. The mass of proletarians forms a sort of plebeian society that does not work, or whose work pays too little. Finally, the capitalist oligarchy, much like the major patrician families of antiquity, procures the favors of the plebeian class in return for providing “bread and circuses,” remarks Saint-Paul. 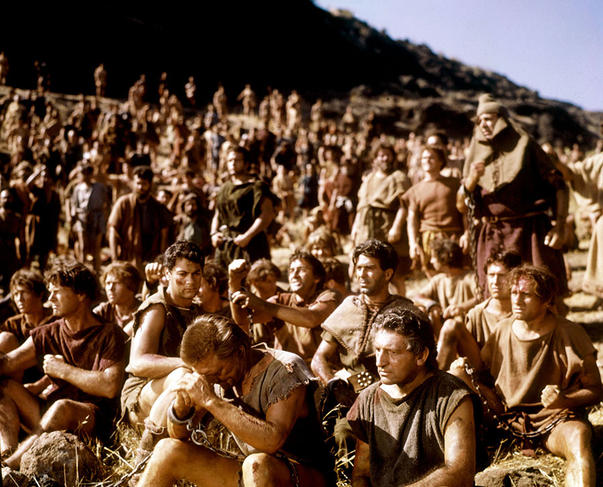 Scene from Stanley Kubrick’s “Spartacus” (1960). In one of the futuristic scenarios envisaged by economist Gilles Saint-Paul, society is a variant on the model of the Roman Empire, with robots now assuming the role of slaves. 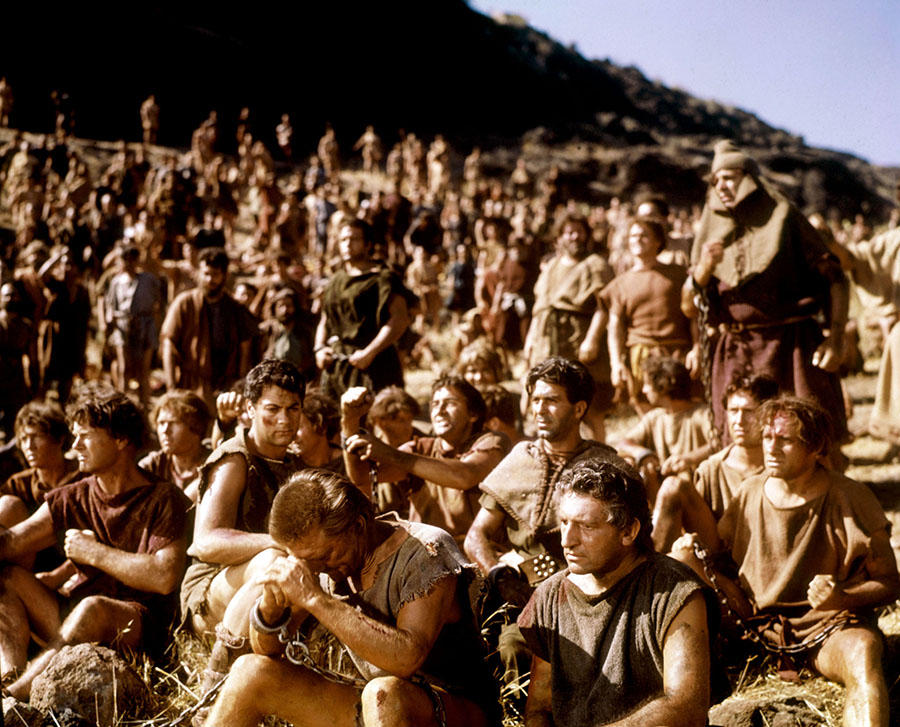 Salaries fall below subsistence level and the world’s population rapidly declines. The only survivors are the robot owners. This scenario is a return to the Malthusian system3 in which long-term growth does not produce improved living standards since as soon as salaries exceed the subsistence level, birth rates increase once more and distribution of wealth among all the children to be fed, clothed and entertained cancels out all forms of accumulation. “The fall in birth rates at the end of the 19th century provided developed countries with a way out of the Malthusian trap in which they had been ensnared for the preceding 4000 years. The Industrial Revolution thus led to an exceptional increase in living standards.” Who then will fall back once more into this trap? “The relatively undeveloped countries and certain dictatorships,” says Saint-Paul.

The less-developed countries could eventually outstrip the West: such societies of non-redistributive rentiers will in fact enjoy a higher number of robots per capita due to the disappearance of the working classes pure and simple.

Similarly, recent decades have seen extensive famines and massacres in a number of African and Asian countries that would be unacceptable in democratic societies. “The less-developed countries could eventually outstrip the West: such societies of non-redistributive rentiers will in fact enjoy a higher number of robots per capita due to the disappearance of the working classes pure and simple,” suggests the economist. “But this will only happen if these countries lower their fertility rates and if they set up credible ownership rights for their robots, thereby putting an end to looting, civil unrest and corruption.”

6 – Welcome to the Matrix

Automation obviously exerts downward pressure on salaries, but the subsistence salary level would also be lowered: thanks to new technologies, improved agricultural productivity could indeed provide low-cost food for a larger number of humans.4 And regarding “excess production,” the virtualization of existence would produce huge savings. “People could live in apartments with luxurious furniture and masterpieces hanging on the walls, although these would be holographic images only,” observes Saint-Paul. We could look forward to spending our holidays in virtual reality, under the warmth of a heat lamp, cooled by the breeze of a dirt-cheap ventilator. An enticing prospect indeed… 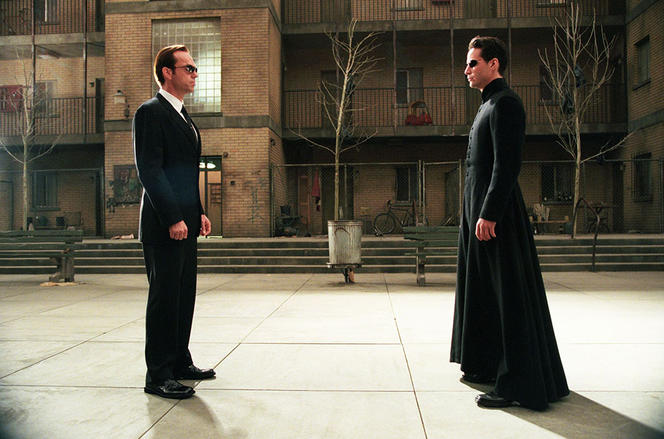 And what if our entire environment were virtual, as in Andy Warchowski’s “The Matrix Reloaded” (2003)? Would the savings in our decorating budget be enough to offset a drop in salary? 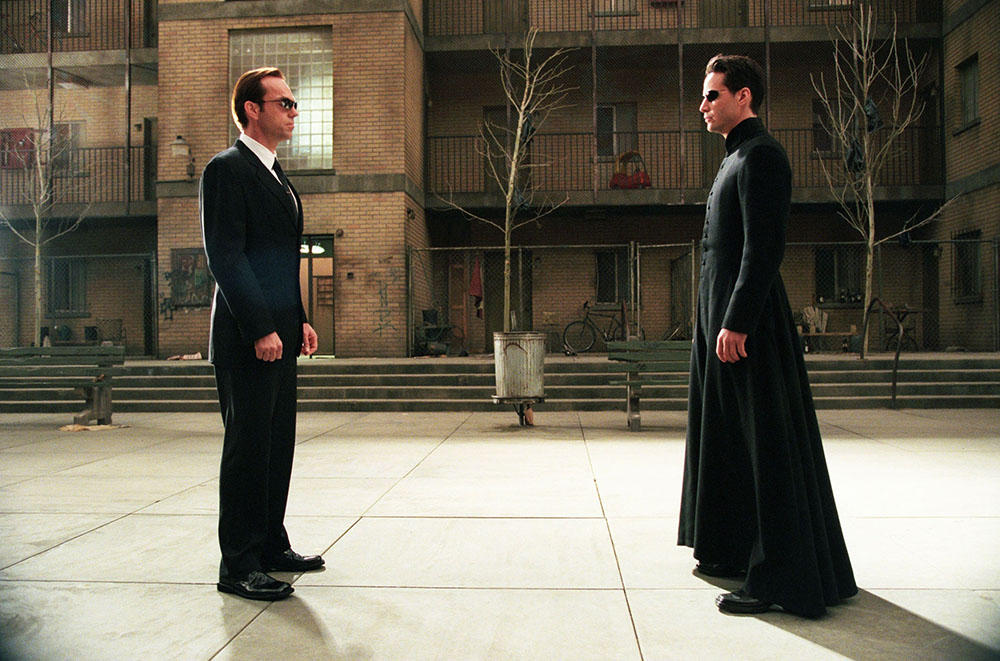 The education system is a costly institution that is currently useful in economic terms because it provides qualified workers who improve the productivity of society. “But in the robotized world I imagine, education will change radically,” explains Saint-Paul. “Instead of people receiving a long-term education, they would be given robots or rights to robots to maintain their means of subsistence. Education, dispensed via virtual technologies and thus inexpensive, will thus become a consumer good rather than a means of becoming more productive and increasing one’s salary.” Does this future strike you as awful? In reality, it is simply a question of point of view: “This would reduce inequalities by placing everyone on an equal footing. For the last 40 years or so, those doing well at school and receptive to the educational system have been systematically favored to the detriment of the others,” concludes the economist.

Article
Feminicide: naming the crime in order to fight it
Economy

Article
How Wine Conquered the World

Article
Income Inequality: the Tip of the Iceberg?
Robots

Article
The Challenges of Social Robotics