The history of women’s football is not an uninterrupted stream of successes, by a long shot. Having had its heyday in the period during and after World War I, with examples like the “munitionettes” in the United Kingdom and the teams of the French federation of women’s sport societies, the FSFSF, it fell into oblivion until the mid-1960s. For nearly 50 years, practicing the sport was made difficult for women around the world. Football was indeed considered “incompatible with femininity” and female players were generally denied access to the fields (by law in Brazil, and by the threat of sanctions for clubs in other countries).

One century after the Armistice of 1918, women account for a mere 7 to 8% of all players in France with about 150,000 registered members, even though this number is rising fast (growing more than fourfold in the past 20 years). This upturn is no doubt linked to increased media coverage of women’s football in recent years, which enhanced its image, encouraged its practice, and as a result changed its status. 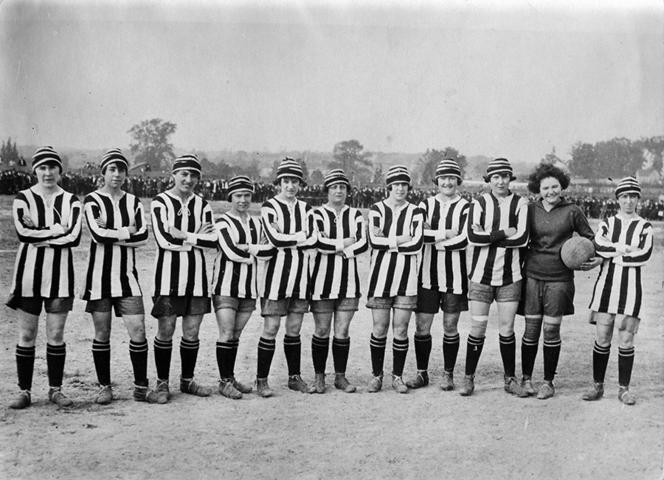 Women working in the munitions factories to replace men who had been sent to the front in World War I. In October 1917, a group of women at a factory in Preston, in northern England, formed the Dick, Kerr’s Ladies Football Club, which would become world famous before women were banned from the playing fields for 50 years. 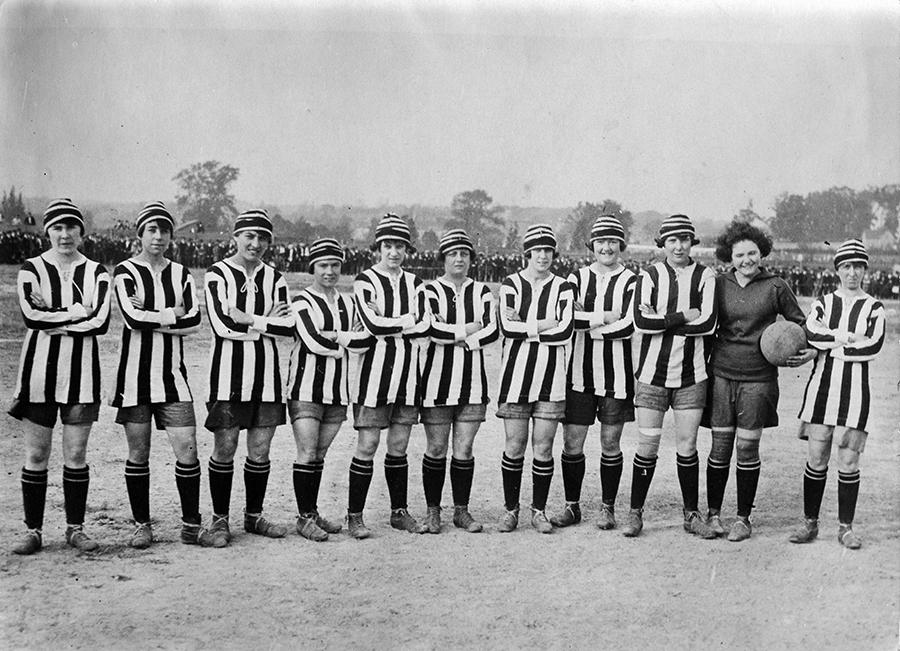 Women working in the munitions factories to replace men who had been sent to the front in World War I. In October 1917, a group of women at a factory in Preston, in northern England, formed the Dick, Kerr’s Ladies Football Club, which would become world famous before women were banned from the playing fields for 50 years.
Gircke/ullstein bild via Getty Images
Gircke/ullstein bild via Getty Images
Share
Share

The 2019 FIFA Women’s World Cup in France seems to have been a turning point in the history of women’s football, resonating beyond the sphere of sport competition itself, with many people seeking to appropriate the event for other purposes, mainly political and societal. But the issue that sparked the biggest controversy, and captured the attention of economists, was no doubt the pay gap between men and women players, with football being nothing more than a mirror of society.

Social inequalities have been a key consideration in economics since the origins of the discipline. Today, the work of Anthony Atkinson or the more recent writings of Thomas Piketty on income distribution and household wealth have placed this issue at the centre of the debates on economic policy, especially as regards taxation. The “gender economy” gives an extra dimension to the question: among all the possible inequalities (income, wealth, education, health, etc.), discrimination between men and women – and in particular wage discrimination – is deemed the “least acceptable” in France.1

The most publicised news story from the World Cup was the lawsuit filed in Los Angeles by the victorious US team, led by Megan Rapinoe, who brought legal proceedings against their federation for discrimination. Their claim, however, was dismissed in a summary judgment in early May of this year. The decision was met with widespread bewilderment, given the fame and popularity of the US women’s national team compared with that of their male counterparts, whose record on the field is much less impressive. On the other hand, the arguments raised often tend to confuse the salaries of women in the American professional clubs, the bonuses paid to the national team, prizes for competitions, etc. Unlike men, women on the national team get a base wage plus an extra salary from the US federation if they play in the US championship,2 and receive more money in certain years than male players. 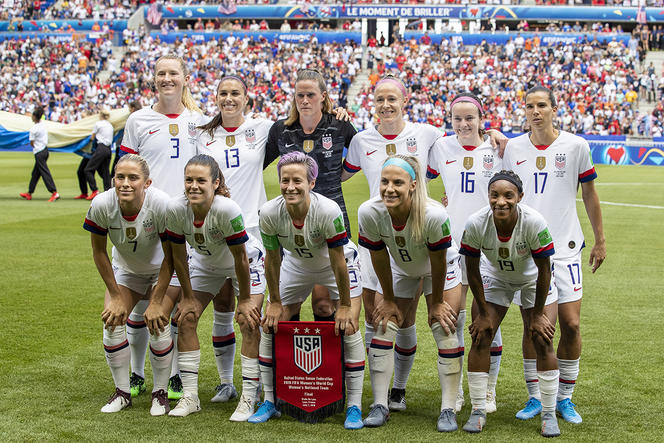 The US national team in Lyon (central eastern France) before they won the FIFA Women’s World Cup on 7 July, 2019. Megan Rapinoe (front centre) and her team want to appeal the judgment in May that dismissed their claim for equal pay with the male team. 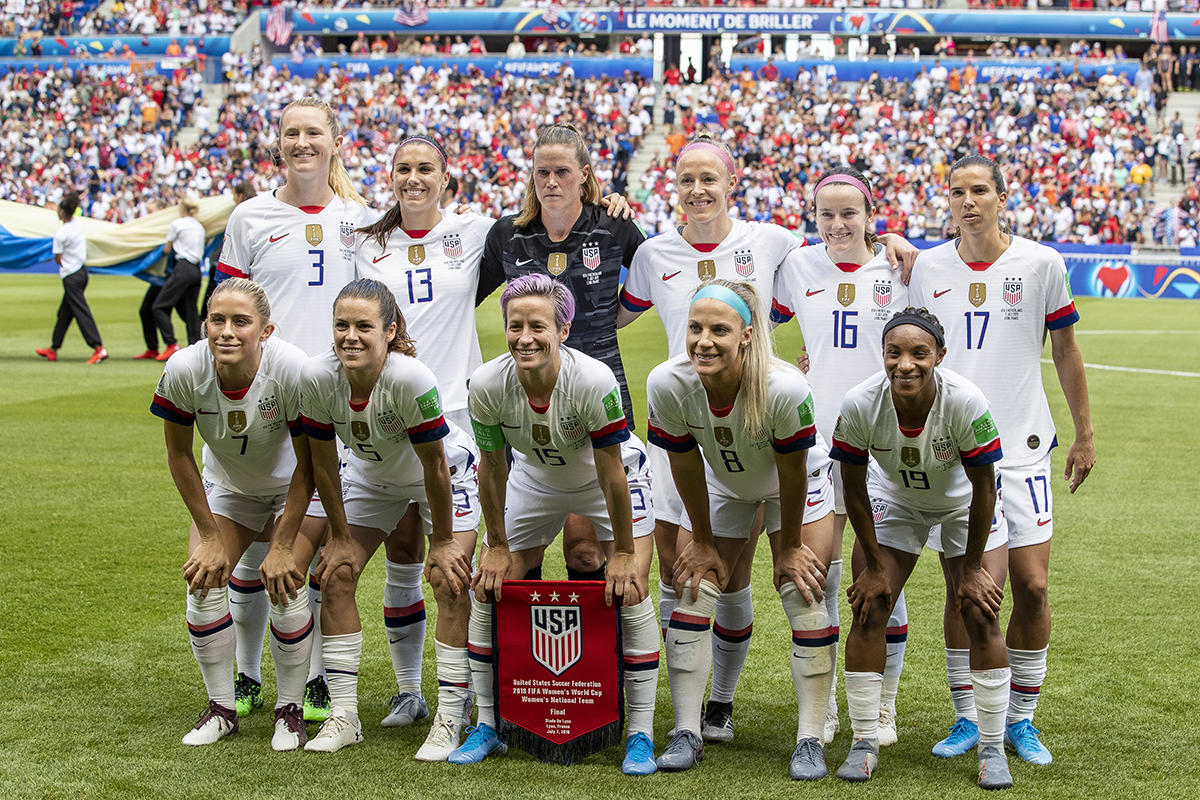 Generally speaking, a distinction should be made between federations and clubs in addressing the question of pay equity between male and female footballers. A national women’s team can raise the issue of wage equality for international players: the federations, like governments, are free to define a redistribution policy. Yet club football is different and depends on economic factors.

The ratio between men and women’s average salaries is 27 to 1. This imbalance is not the result of discrimination but is rather due to the size of the “pie” to be divided up: in 2019 the budget of France’s Premier League (French male championship) totalled €1.9 billion, while that of Division 1 (female equivalent) was €19 million – one hundredth of the men’s budget. The clubs themselves make relatively little profit, and the payroll is their main expense: the players pocket most of the money generated by football. Their salaries are contingent upon the clubs’ budgets, which in turn depend heavily on television royalties and sponsorships. This situation explains why the remuneration of male players, especially superstars of equivalent talent, can vary tremendously from one generation to another: the average monthly earnings of a pro in the mid-1970s amounted to about €2,500 in modern-day euros – about one-thirtieth of what a Premier League player earns today. On the other hand, it is more or less the same as the average salary of a top female player in 2020…

The overall budget of France’s Division 1 has indeed doubled in the past decade, buoyed by newfound media interest in women’s football. Despite this growth in revenue though, the league is increasingly running a loss, which has increased by an annual average of 75% over the past five fiscal years. In 2019 the ratio between the budgets for the men’s and women’s championships was 100 to 1, which is reduced to about 60 to 1 when considering only the money spent on remuneration (with higher headcounts for the men’s clubs). This means that the structural deficit of the D1 championship arises from the fact that the clubs’ payrolls account for nearly their entire allowance. Women’s football also has its highly paid superstars (like the Lyon player Ada Hegerberg, who receives €400,000 per season). But within the same clubs, it is often the men’s teams that keep the female ones afloat. And the same goes for the English league.

More than an economic entity, football is first and foremost a “beautiful” game. Encouraging female practice means training, increasing the number of teams and developing the infrastructures to accommodate young players. More girls will want to play as the national team becomes more competitive and the French championship becomes a bigger, more high-profile draw. In parallel, “reforms” could be envisaged concerning the professionalisation of the championship, the structures of the clubs and the status of international female players. All of these efforts should also come with greater media exposure for women’s football. 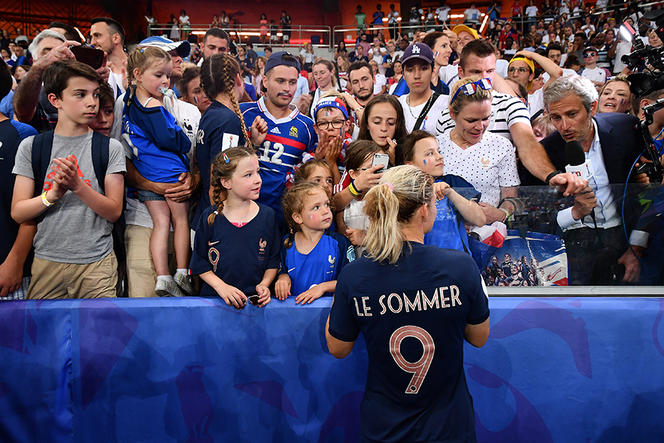 Eugenie Le Sommer and French supporters after the quarter-final loss to the United States during the Women's World Cup game held in Paris, on June 28, 2019. 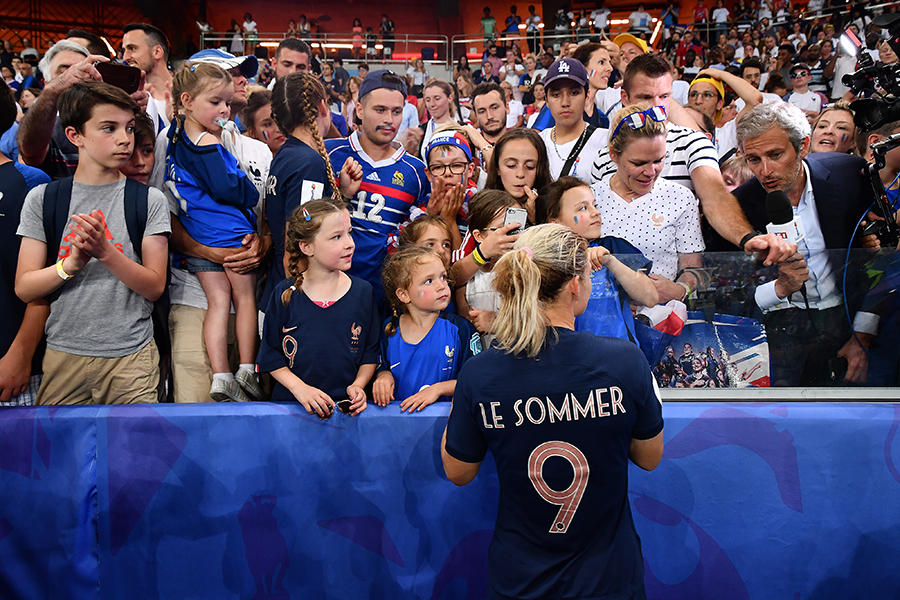 As for the federations, in 2012 the Union of European Football Associations (UEFA, of which the French Football Federation is a member) launched a development programme under the title “Time For Action”, and in 2018 the International Federation of Association Football (FIFA) implemented a “women’s football strategy” with a budget of €1 billion over four years. Will all of these reforms allow the financial gap between genders to be closed?

It is impossible to answer that question at a time when the football “asset”, economically speaking, still shows such disparity between women and men. In this development phase, the most constructive way forward could well be to stop comparing the two.

0
Julie Grollier, a (bio)inspired researcher Previous
Of volcanoes, scientists and politicians Next 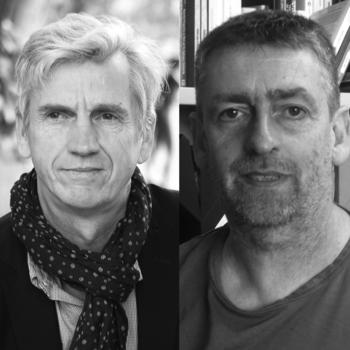 Luc Arrondel is a CNRS senior researcher and an associate professor at the Paris School of Economics....