People attend opening day of CES at the Las Vegas Convention Center in Las Vegas, Nevada, on January 5, 2017.
DAVID MCNEW / AFP
Share
Share
Among the thousands of exhibitors at the Consumer Electronics Show 2018, the world's largest consumer tech trade show, we put the spotlight on four young French start-ups that have come to showcase their innovations.

Every year since 1967, the tech world has converged on Las Vegas for the Consumer Electronics Show (CES). The prestigious trade fair showcases the best of high-tech, offering both multinationals and startups an opportunity to unveil their latest innovations. Among the newcomers, several were spawned by CNRS laboratories and retain strong ties to them. Their next challenge is to stand out among the 4000 other exhibitors at the 2018 edition of the CES on January 9-12.

Are the days of the good old Geiger counter numbered? With its sensor Rium, the French startup Icohup1  goes far beyond the mere detection of radioactivity. This device not only measures radioactivity levels but also identifies the substances that produce them using a spectrometer. The detector then transmits its data via a mobile application, informing the user of the presence of specific uranium isotopes, cesium, radon, americium-241, etc. Icohup is a spinoff of the ILM laboratory,2  where its founder Gaël Patton completed his PhD. "Our know-how in designing instruments comes from the ILM, with which we maintain strong technical ties," he explains. "Actually, we do all of our tests and development work there."

The startup, which is based in Lyon and Limoges, presented the basic concept for Rium at the CES 2017 and won a CES Innovation Award. This year it is returning with a fully developed product—and timing its launch on the market to coincide with the fair. "The CES is a fantastic opportunity to make contacts on the French and international markets," enthuses Patton. In addition to the original version of Rium, the team will also take along a prototype specifically designed to detect radon, a radioactive element found in large quantities in certain parts of France. 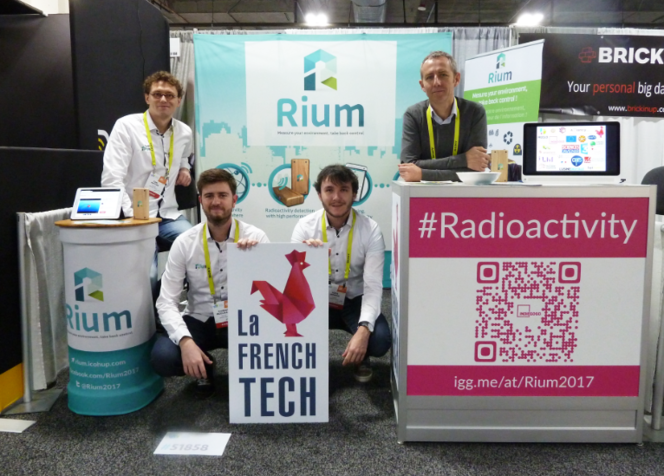 Gaël Patton (top left), co-founder of Icohup. The company, on display in Las Vegas in 2017, received a CES Innovation Award for its Rium concept. 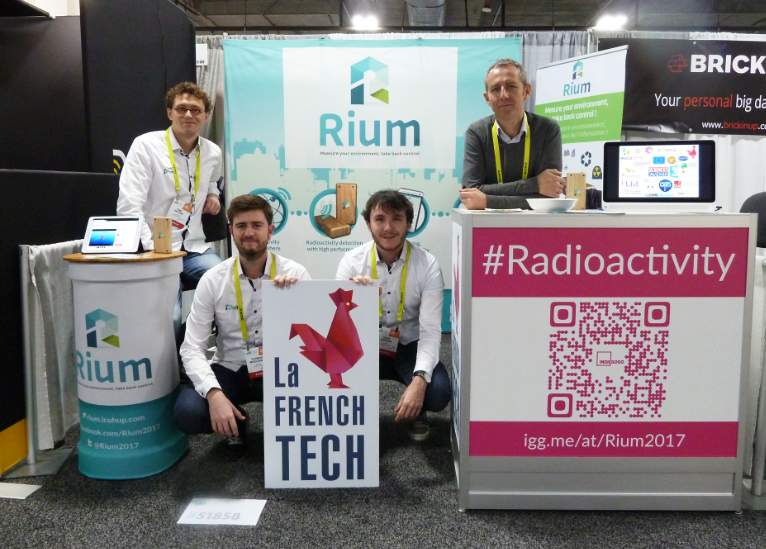 With the accompanying app, Rium will cost €400 including tax. Customized versions will also be available for professionals and industry. "We can install a whole network of detectors connected by radio to a single reception point, making it possible to monitor an entire site from a single location," Patton adds. "And since the basic structure is already perfected, we can adapt the system to individual industrial sites."

Icohup is envisioning other applications, such as radiation detectors mounted on drones for environmental cartography. During low-altitude flyovers, the data would be gathered directly by the drone and then transmitted to the pilot in real time.

"We have also launched new projects with other CNRS joint research units in Limoges," Patton reports. "For example, we’re working with the XLIM3  to develop an innovative secure solution for connected objects, which are a weak link in cybersecurity."

Chronocam, the camera that only sees movement

At a high-tech extravaganza like the CES, it is easy to imagine the fierce competition among camera makers, all locked in a race to offer the most megapixels and the highest resolutions. Yet one of them, Chronocam, founded in 2014 by Ryad Benosman, Bernard Gilly, Christoph Posch and Luca Verre in connection with the Institut de la Vision,4  prefers to focus on a different aspect of camera technology. Based on some 20 patents, the startup’s systems react at a speed equivalent to 100,000 frames per second—an astronomical figure considering that films in cinemas are projected at 24 frames per second.

At that speed, one might expect Chronocam cameras to generate huge masses of data. In fact, it is just the opposite: they require as little as one one-hundredth the memory capacity of a conventional camera! "In our sensors, the pixels react independently from one another," explains Chronocam communication and marketing director Noel Thévenet. "They only detect movement and otherwise remain inactive."

In other words, the system only "sees" changes. Installed in a moving car, it does not record a static view of the landscape or the sky. The quantity of data to be processed is thus considerably reduced, which also allows the user to focus on the most important information very quickly.

This fast reaction time makes Chronocam’s technology especially promising for autonomous vehicles and drones, and the company has signed a partnership agreement with Renault-Nissan. Its camera operates on grayscale images and, unlike most other models, does not have problems with glare. This is a sizeable advantage given that the phenomenon has already caused at least one accident involving an autonomous car: coming out of a tunnel, its standard camera did not adjust quickly enough to the change in brightness and confused an oncoming white truck with the sky. 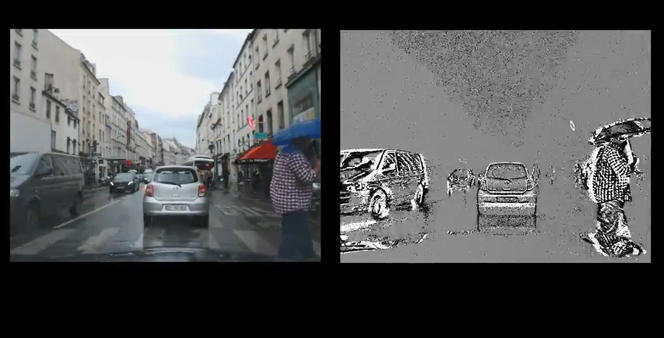 On the left, the image comes from a standard camera; on the right, it is obtained by a chronocam camera. The system, faster and lighter than a conventional device, only responds to visible changes. 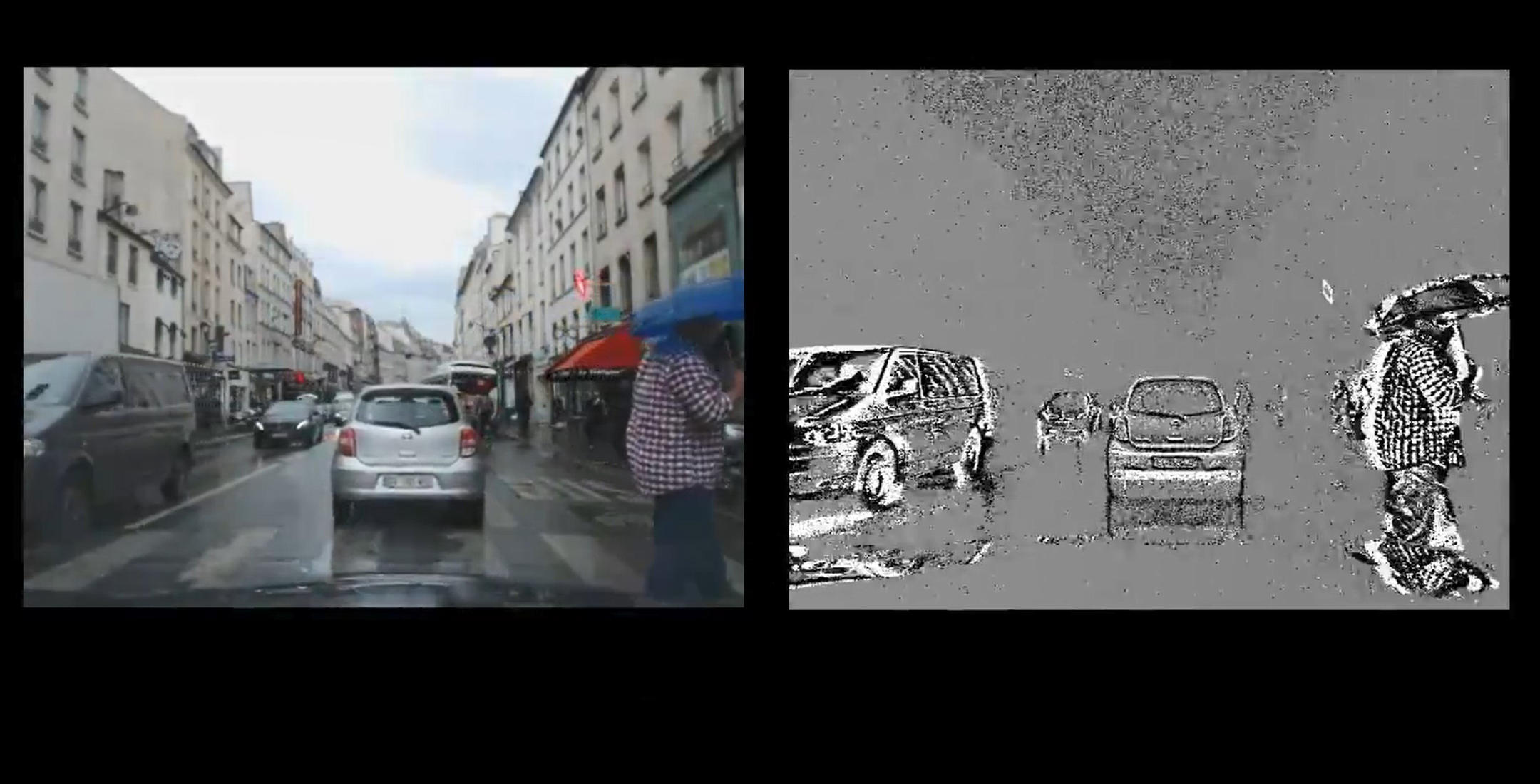 On the left, the image comes from a standard camera; on the right, it is obtained by a chronocam camera. The system, faster and lighter than a conventional device, only responds to visible changes.
CHRONOCAM
CHRONOCAM
Share
Share

"Chronocam is a disruptive innovation," Thevenet asserts. "Rather than capturing overall images, our solution gathers only the most important data in a given field of vision." The principle also has potential applications in robotics and surveillance, improving security by reducing the devices’ reaction time and allowing users to identify the slightest change in the zone being monitored.

After presenting its Photo Proof application for image certification at the CES 2017, KeeeX is returning to Las Vegas with a technology called Signatory. Founded by Laurent Henocque, senior lecturer at the Marseille-based laboratory LIS,5  the startup specializes in document and data protection. But rather than preventing the modification of a document, its solutions authenticate a specific version, making it possible to reject any subsequent unauthorized changes.

Signatory uses the embedded digital signature technology KeeeX, which can inject proofs of integrity in any file, as well as blockchain (public databases divided into information blocks, which are regularly verified for authenticity). "We anchor the proofs of existence to the Bitcoin blockchain," explains KeeeX sales director Cyprien Veyrat. "People tend to think of it only as a virtual currency, especially now that its value is booming, but they don’t know that Bitcoin is a publicly auditable record of evidence."

In other words, the system used to authenticate Bitcoin exchanges can protect any other type of data. However, rather than uploading the documents to be authenticated to the blockchain, KeeeX uses a message digest. This unique identifier, consisting of digits and letters, is humanized by the company so that it can be easily read, pronounced, and even indexed on search engines. This digital "footprint" is not accessible to any external user. If any modification takes place, the document will no longer match the message digest and the violation will be detected.

Signatory authenticates video selfies: users approve a contract and pronounce the beginning of the message digest. This new type of signature is guaranteed by KeeeX, which certifies the integrity of the video and the signer’s identity, as well as the related timestamp and geolocation.

"An insurer can thus e-mail an estimate to a client and receive their approval, wherever they are," Veyrat explains. "We provide the connection between the video proof and the contract." 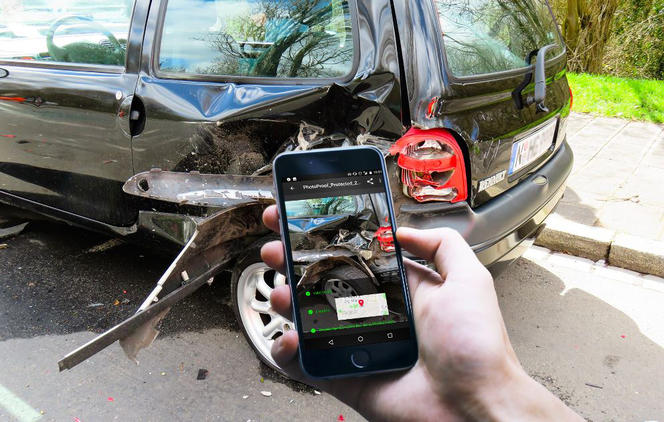 Using the device developed by KeeeX, proof of integrity, identity, date and geolocation are embedded in the photo which can be verified by anyone. 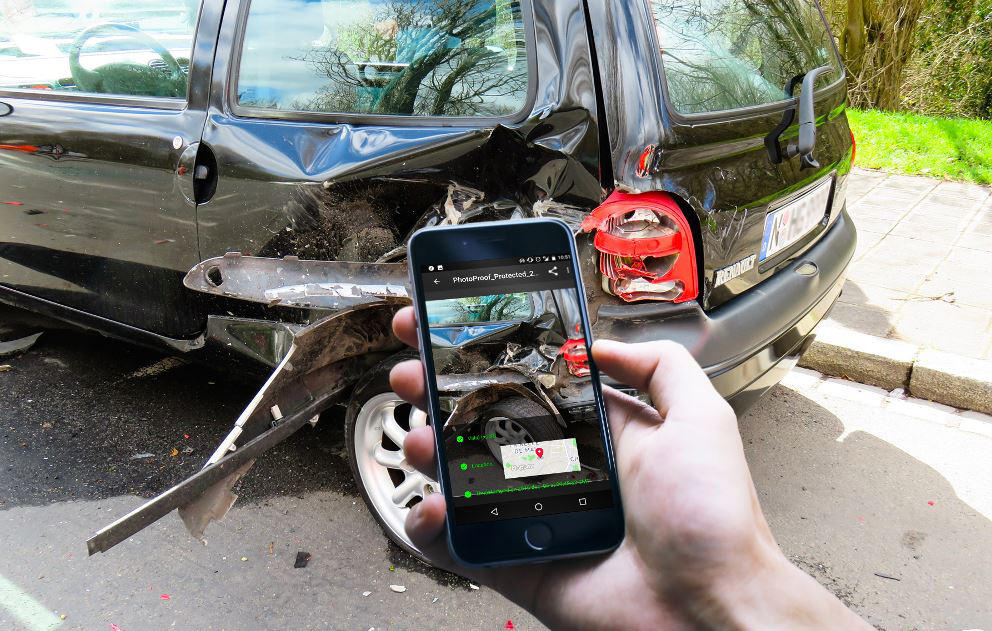 Using the device developed by KeeeX, proof of integrity, identity, date and geolocation are embedded in the photo which can be verified by anyone.
KeeeX
KeeeX
Share
Share

KeeeX has already developed solutions for SNCF Réseau (the infrastructure branch of the French railway network), to monitor and protect the drafting of internal documents. The startup has also contributed to the authentication of press releases by the French energy company EDF: a dedicated window allows users to verify whether a text was indeed written by EDF, thus avoiding misinformation.

SmartUpp–VR controls for your factory

Finally, what would an innovation and technology hub like the CES be without a few robots? The startup ITECA, in western France, has gone one step further, by showcasing automata controlled by virtual reality. Within the framework of a contractual agreement with the ROBIOSS6 team of the Poitou-based PPRIME7 laboratory, the company will take the opportunity of the CES 2018 to present its latest product: SmartUpp, an environment aimed at controlling factories of the future using VR headsets.

"SmartUpp makes it possible to interact with a production environment, and perform preventive maintenance in real time," says CNRS researcher Jean-Pierre Gazeau, who heads the ROBIOSS team. "While 90% of robots work with proprietary languages"— in other words, exclusive to their manufacturers—ROBIOSS focuses on open platforms that can be easily adapted to various models, he points out.

ITECA designed the virtual reality software, while Gazeau's team programmed the application to communicate with this virtual environment and control the robots. In other words, the former created the command panel while the latter connected it to the machines.

In Las Vegas, the researchers will showcase SmartUpp using material provided by the companies B&R Automation and Lucas Robotics. The latter is based in southwestern France, just like ITECA and ROBIOSS, showing that exchanges at the local level can be truly beneficial. This collaboration was made possible via a technological platform of the CNRS's ROBOTEX network. 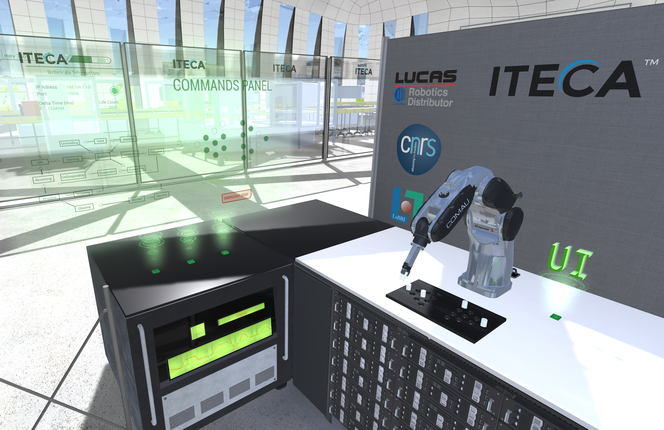 3D virtual rendering of an industrial robot in its working environment. 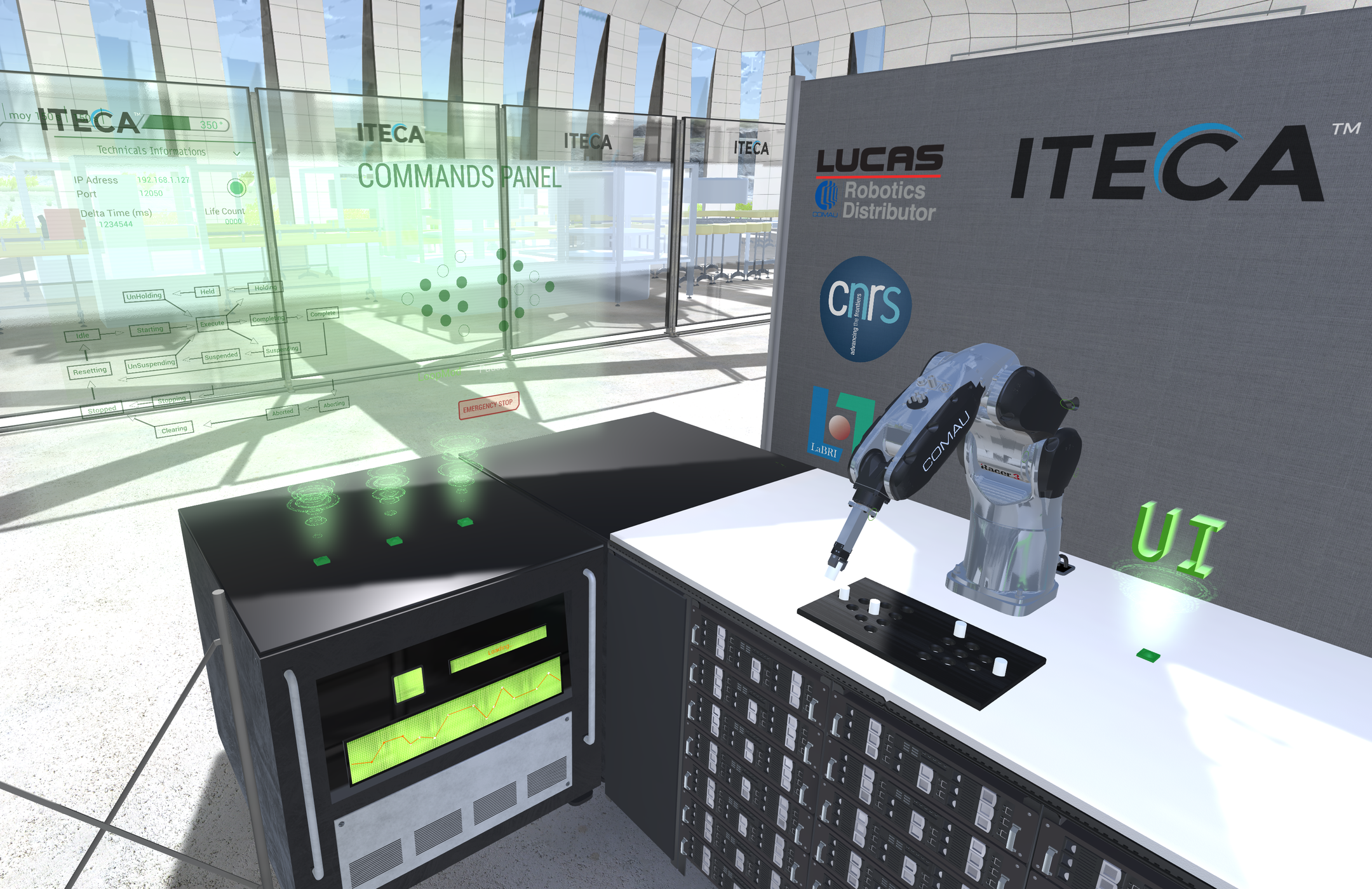 "We're delighted to go to the CES with ITECA", adds Gazeau. "This shows that the CNRS is able to support, promote and transfer the expertise of a small team like ours. And this is essential, especially for researchers in engineering sciences, robotics, or mechatronics. Our know-how is meant to find applications in industrial environments."

Article
Van Eyck was a precursor of augmented reality

Article
Forthcoming revolution will unveil the secrets of matter
innovation