How Wine Conquered the World

How Wine Conquered the World

MOIRENC Camille / hemis.fr
Share
Share
Within a few short decades, wine has established itself as a key product in the global market. During the EuroScience Open Forum (Esof), which is being held in Toulouse last July, a session organized by the "In Vino Varietas" research group focused on the recent developments in the wine sector, from production and commercialization to consumption.

For thousands of years, human history has been closely intertwined with that of wine. A recently published study by archaeologist Patrick McGovern1 indicates that this relationship appears to have actually begun during the Neolithic period in the area that is currently Georgia. During excavations, some 50 km from the Georgian capital Tbilisi, the American researcher and his team discovered a shard of ceramic pottery containing residue of wine dating back to 8000 years BC, making it the oldest evidence of production of this beverage yet identified. Since then, the growing of vines and the associated production of wine have continually accompanied humans in their hunger for conquest, from the Mediterranean shores to Australia, via Central America, Chile, South Africa and California. “Since for thousands of years, wine was an important currency for exchange between different peoples, the expansion of winegrowing in keeping with the colonial expansion of the major European empires set the stage for a global wine trade,” explains Michaël Pouzenc, geographer with the “Rural Dynamics” research team of the LISST2 in Toulouse and founding member of the “In Vino Varietas”3 specialized research group.

The United States lead the way

However, it was not until 1924 with the creation of the Office International du Vin (OIV - the International Wine Office) that the wine sector began to properly organize international trade. Created mainly as a result of France’s efforts to protect its prestigious vineyards from the phylloxera epidemic then ravaging Europe’s vineyards, the OIV (which in 2001 was renamed the International Organization of Vine and Wine) today includes most of the world’s wine-producing countries except for the United States, which left in 2000 to create its own organization, the World Wine Trade Group. 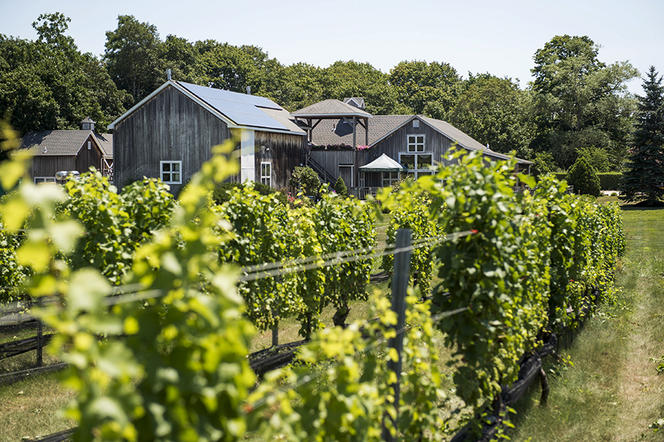 Production of Chenin blanc, a French grape from the Loire Valley, in Aqueboque (Long Island, New York, United States). Unlike France, the US highlights grape variety rather than specific regions. 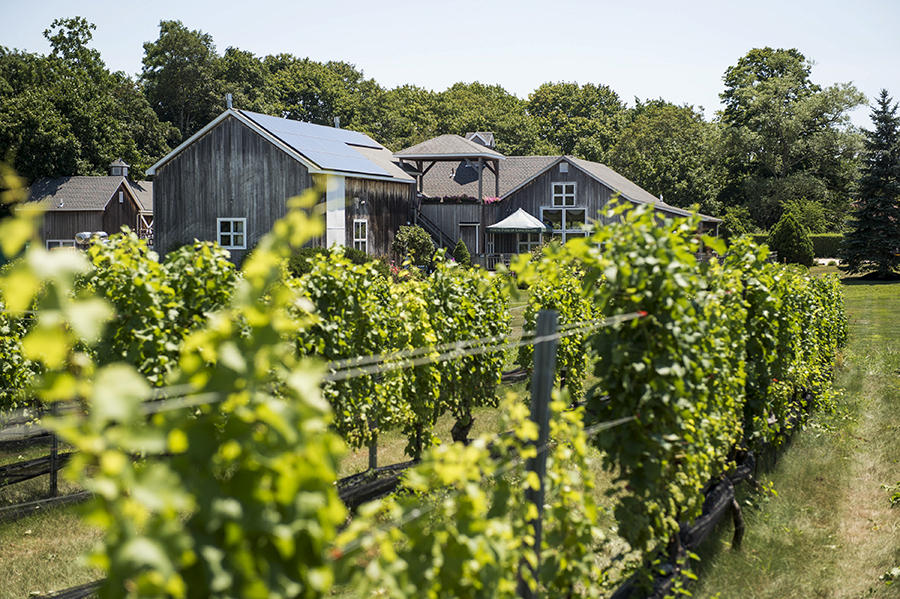 Production of Chenin blanc, a French grape from the Loire Valley, in Aqueboque (Long Island, New York, United States). Unlike France, the US highlights grape variety rather than specific regions.
GORDON M. GRANT/The New York Times-REDUX-REA
GORDON M. GRANT/The New York Times-REDUX-REA
Share
Share
The US has above all had a major influence with regard to the image of wine, which is presented as a sophisticated product that consumers must learn to select and taste.

Although American winegrowing only really began to develop in the 1960s, it immediately parted ways with its European competitors by shaking off these regulatory constraints and allowing producers to adopt their own vinification methods if they so wished. This extremely liberal stance very soon began to pay dividends. “Not only has this temperate land, where prohibition remained in force until 1933, become the world’s fourth most important wine producer; it is also the world’s largest consumer of wine,” points out Danielle Cornot, social anthropologist of wine at the Certop4 in Toulouse and founding member of “In Vino Varietas.”

The desire to innovate and break free of any shackles, which is such a defining element in American culture, is today reflected in the country’s approach to making and selling wine, says this researcher who is well versed in the US wine sector. “In addition to the United States placing the accent firmly on high-quality grape varieties, thereby distinguishing its own wines from those of the Old World, which are much more closely rooted in their regions of origin, the country has above all had a major influence with regard to the image of wine, which is presented as a sophisticated product that consumers must learn to select and taste.” And, surprising as it may seem, it was by accentuating the controversial “French paradox,” according to which regular wine drinking helps prevent cardiovascular disease, that consumption of the celebrated fermented beverage gradually became popular with the general public across the Atlantic.

Meanwhile, on the other side of the Atlantic in the Old World, France is increasingly relying on the prestige of its top wines from Bordeaux and Burgundy to underpin its reputation as a great wine-producing nation. Until now, the strategy has allowed it to maintain its place as the world’s leading wine exporter in terms of commercial value, with sales of $10.2 billion in 2017. “In order to maintain its rank on the international market, France has clearly opted for upgrading its range of wines by reducing production levels in favor of quality, and thus of higher prices per bottle,” adds Pouzenc.

In order to maintain its rank on the international market, France has clearly opted for upgrading its range of wines

In France, as in most other major European wine producing countries, consumer habits have also moved towards reduced consumption levels involving higher-quality wines. Although the French are still the world’s leading wine consumers, with an average annual consumption of 42 L per inhabitant, this rate has fallen almost threefold within the last 40 years. While export volumes on the international wine market have remained stable for several years, the total value of wine exports nevertheless continues to grow at a steady rate, rising from $14 billion in 2000 to $34 billion in 2016.

“This reflects a pronounced trend among new and essentially middle-class consumers towards purchasing wine not simply as an alcoholic drink but rather as a cultural product in its own right synonymous with a certain art of living,” concludes Cornot. 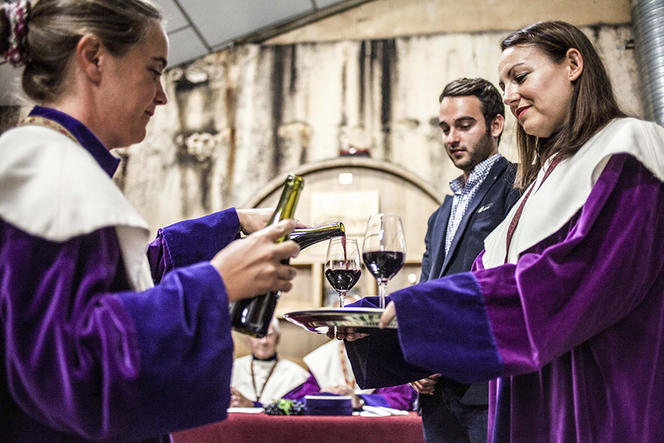 Grape harvest of 2015 with Echansonnerie des Papes, the wine brotherhood of Châteauneuf-du-Pape. In France, wine is associated with terroir and a certain lifestyle. 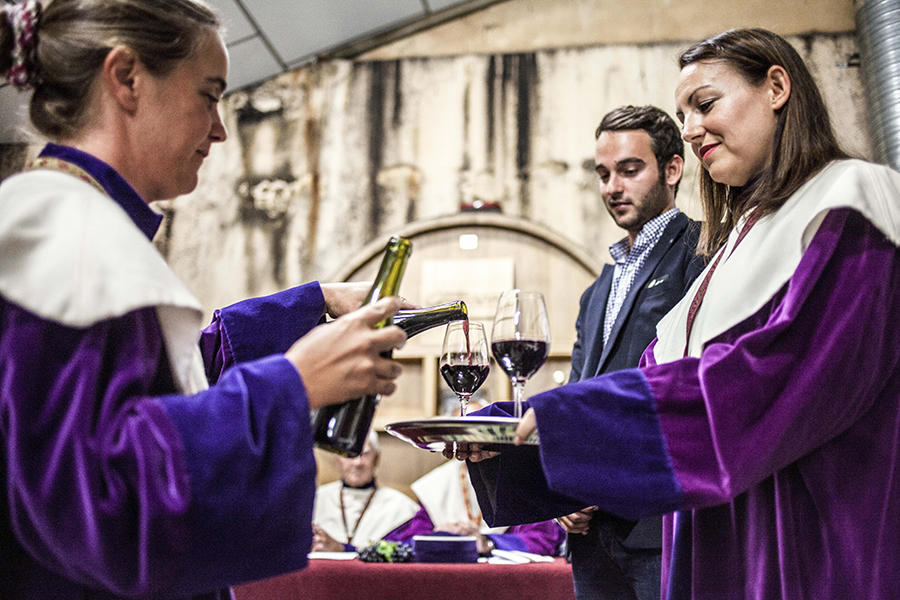 Although 1892 marked a renaissance of winegrowing in China with the creation of the Changyu company, the Chinese exhibited marked interest in wine following the country’s economic opening started by Deng Xiaoping in 1978. This resulted especially in partnerships with major companies such as Rémy Martin, Pernod Ricard and Castel.

Since then, the love affair of the Middle Empire with this fermented drink, preferably red, a color synonymous in Chinese culture with prosperity and happiness, has continued to blossom. Consumption of wine is indeed actively encouraged by the government as a substitute for excessively strong alcoholic beverages such as Baijiu, an alcohol distilled from fermented cereals.

In China, wine has rapidly established itself among the well-off urban middle-class as a symbol of prestige, power, sophistication and health.

“In this country where alcohol has always been openly consumed in festive, family and professional circumstances, wine has rapidly established itself among the well-off urban middle-class as a symbol of prestige, power, sophistication and health, to the extent that China is now the world’s fifth largest consumer and fourth largest importer of wine,” explains Cornot. After becoming the world’s largest consumer of red wine within a few years, China is also the main importer of wines from the Languedoc-Roussillon region in southern France.

In a bid to affirm its identity and its capacity to produce wines to satisfy domestic demand, China has also developed winegrowing on a huge scale. In fact, the country now has the second largest surface area of vineyards in the world, just behind Spain and ahead of France, and is indeed the world’s 6th largest wine producer (OIV 2016).5 “While these locally produced wines, which represented 83% of the country’s wine consumption in 2013 and 70% today, are not always very satisfactory, the Chinese are committed to improving the quality of their wines and they have the resources to achieve this goal,” observes the Certop social anthropologist. 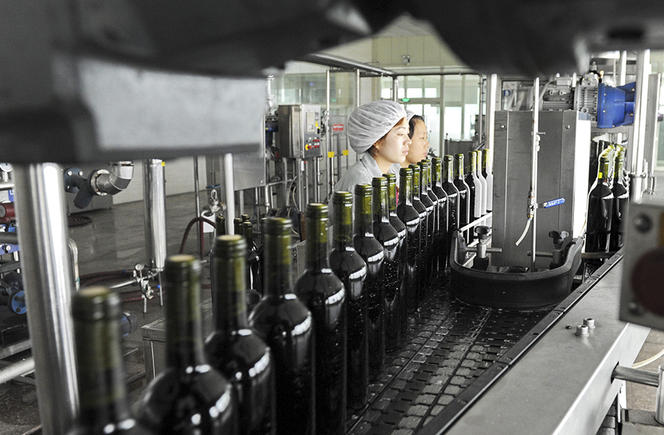 Red wine production line in Changli County, Hebei Province, North China. The country now operates the second largest vineyard in the world, behind Spain and ahead of France. 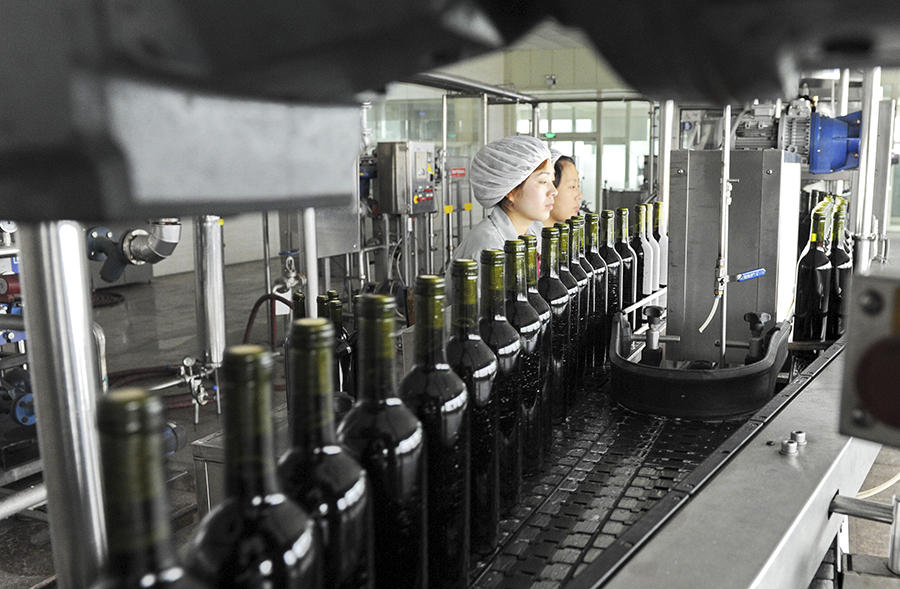 Although wine continues to conquer new adepts each day, not only in China but also in other countries where consumption is much more modest for the moment such as India or Malaysia, tastes among these new consumers are becoming increasingly diverse. And in terms of grape variety or vineyard, whether sparkling or still, tannic or smooth, organic or natural, flavored or not, the range of wines currently available is seemingly infinite.

In France, this has led in particular to increasing consumer demand for organic and biodynamic wines and for natural wines made without the slightest trace of added chemicals. “Although the production of organic wines is fairly marginal, accounting as it does for only 3% of overall French production, it nevertheless increased twofold between 2012 and 2015, as did the surface area of organically grown vines between 2008-2015,” adds Pouzenc. More recently, the simple designation “Vin de France,” which replaced the denomination “Vin de table” (French Table Wine) in 2009, is increasingly being used by wine producers seeking to free themselves of the constraints of their Appellation d'Origine Protégée (AOP - Protected Designation of Origin). The more flexible production requirements of the “Vin de France” designation, for instance, allow growers to use grape varieties that were not previously authorized under the AOP designation, thus giving freer rein to the creativity and imagination of individual producers. While 40% of the world’s wine production relies on the use of 10 main grape varieties, the remaining 60% is made up of a mosaic of some 4000 grape types offering vastly greater potential to all these ‘creative’ growers wishing to explore new avenues. 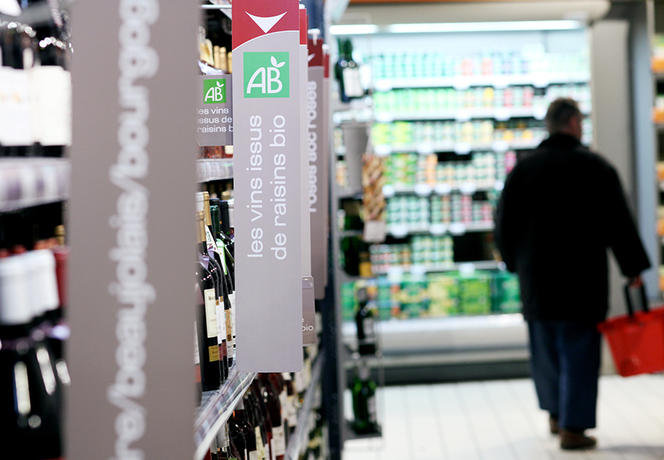 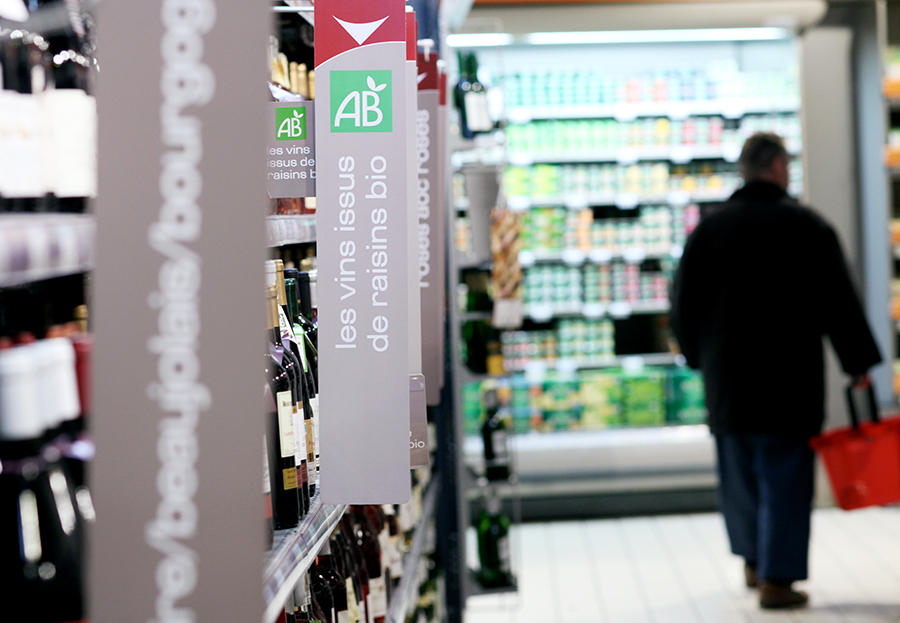 While the range of wines commercialized around the world has grown considerably to meet the increasing global demand, the profession of winegrower is becoming more complex, as Cornot explains: “Today, the vast majority of wine growers are no longer satisfied with just making wine; many are also actively engaged in promoting and selling their product while incorporating other activities alongside their growing and production, such as catering, tourist accommodation, and organizing sporting and cultural events.”

This shift of the profession towards a more polyvalent approach has also been accompanied by considerable development of wine tourism in most of the winegrowing regions of the world. This phenomenon was noted by the “In Vino Varietas”(5) researchers in two vineyards in the south-west of France that they started studying last year as part of a research program devoted to the effects of globalization on winegrowing: “Unlike American vineyards, where the presentation given to visitors revolves primarily around marketing, these two vineyards in Occitania place the accent firmly on the culture and heritage associated with working the vine, like most of their French and European colleagues,” states Pouzenc. At a time when the characteristics of winegrowing in the Old World and in the New World are increasingly starting to resemble each other, making the opposition between New World and Old World obsolete and irrelevant, and the manner in which individual growers think and talk about their wine remains a key factor in understanding the renewal of cultural diversity within a globalized context.

Article
Feminicide: naming the crime in order to fight it
Economy

Article
Income Inequality: the Tip of the Iceberg?