Who Invents Languages for Science Fiction?

Who Invents Languages for Science Fiction?

Frédéric Landragin
Who invented the Dothraki spoken by Daenerys in Game of Thrones? What linguistic theory is the basis for the language spoken by the extra-terrestrials in the film Arrival? Frédéric Landragin, author of a recent book on the topic–How to Talk to an Alien? Language and Linguistics in Science Fiction–provides answers. 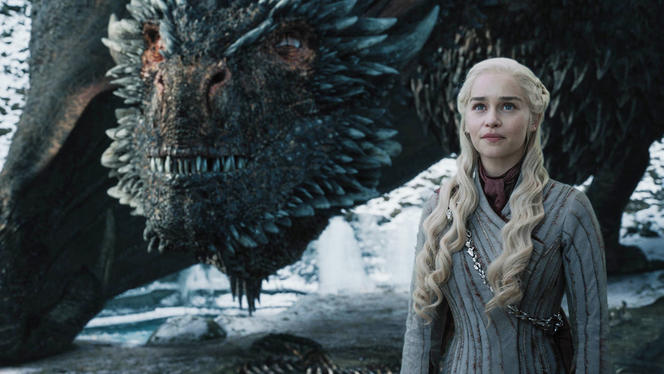 For greater realism and plausibility, the creation of fictional language is now left to conlang linguists (pictured here is Daenerys Targaryen from the Game of Thrones, played by Emilia Clarke). 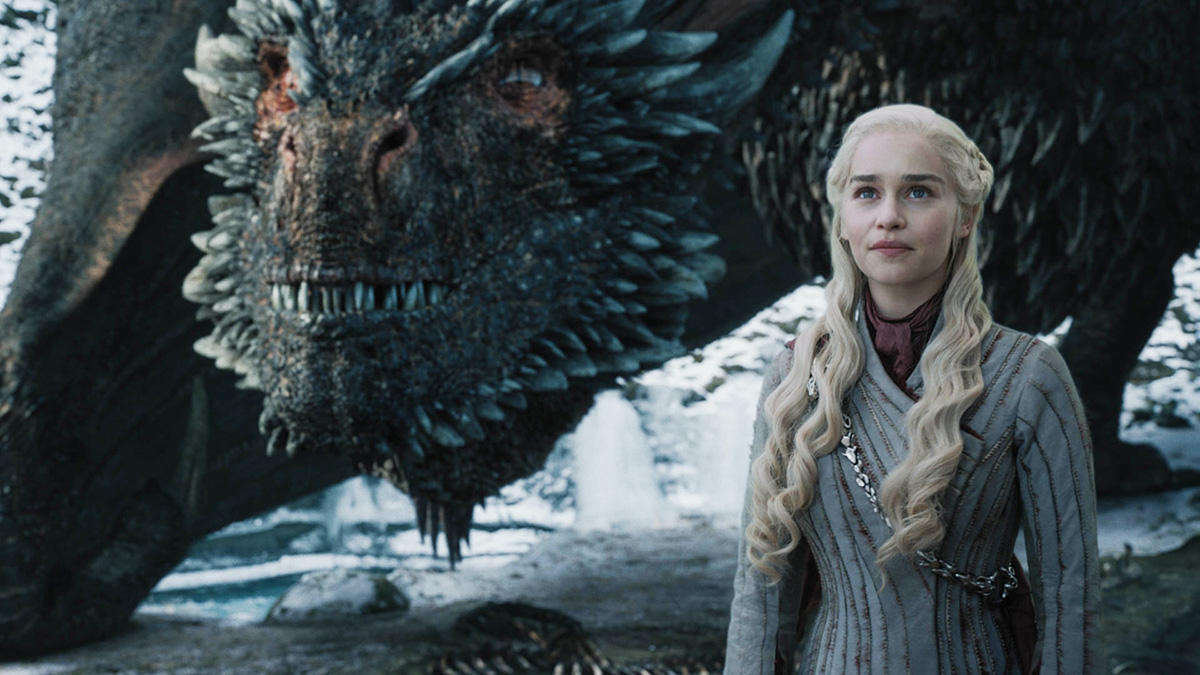 The Game of ThronesFermerAmerican medieval fantasy television series (2011-2019) created by David Benioff and D.B. Weiss, adapted from the novels of George R.R. Martin. television series and Lord of the RingsFermerAmerican-New Zealand fantasy film trilogy (The Fellowship of the Ring, 2001; The Two Towers, 2002; The Return of the King, 2003) directed by Peter Jackson, based on the novel of the same name in three volumes by J.R.R. Tolkien. trilogy have brought exposure to a new job that requires linguistic skills, namely a conlangerFermerCreator of a conlang or constructed language., or someone who invents a language for fictional needs, whether it be for cinema, literature (J.R.R. TolkienFermerJohn Ronald Reuel Tolkien or J. R. R. Tolkien, was a British writer and university professor (1892-1973). He is chiefly known for his novels The Hobbit and The Lord of the Rings, which were adapted into films by Peter Jackson. is a famous example), or video games (for example the D’ni language in the game Myst). The more a constructed language has characters from real natural languages, the more it “feels real” and contributes to the displacement—spatial, temporal, cultural—that makes science fiction and fantasy so enjoyable, and so full of a sense of wonder. For greater realism and plausibility, the creation of fictitious languages is henceforth left to linguists who specialise in conlanging.

Dothraki and High Valyrian, which were invented for the HBO adaptation of Game of Thrones by the linguist David J. Peterson, who has become a highly successful conlanger, are examples of languages mimicking natural ones. They are actually made up of a rich and varied lexicon, and present linguistic subtleties worthy of being developed in weighty grammar textbooks. The same is true of the Elven languages from the Lord of the Rings or Thor: The Dark World (Alan Taylor, 2013).

Some even include a so-called diachronic aspect, for like living languages they are considered as evolving over time. In fact, linguistic anticipation is a field of science fiction, prompting reflection on the future of languages used by increasingly large communities. 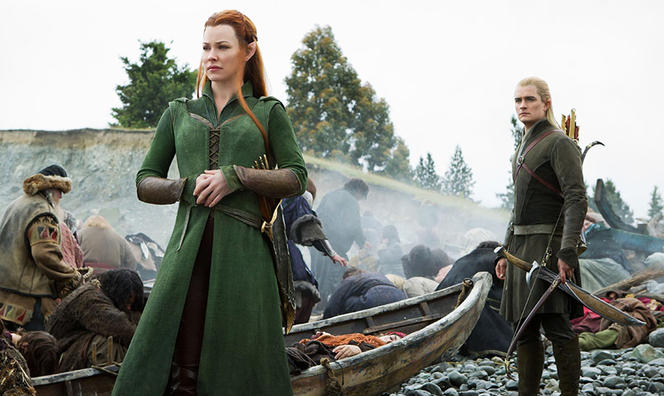 With their rich and varied lexicons, linguistic subtleties, and weighty grammar books, Elven languages, such as those from The Hobbit: The Battle of the Five Armies (Peter Jackson, 2014), sought to mimick natural languages. 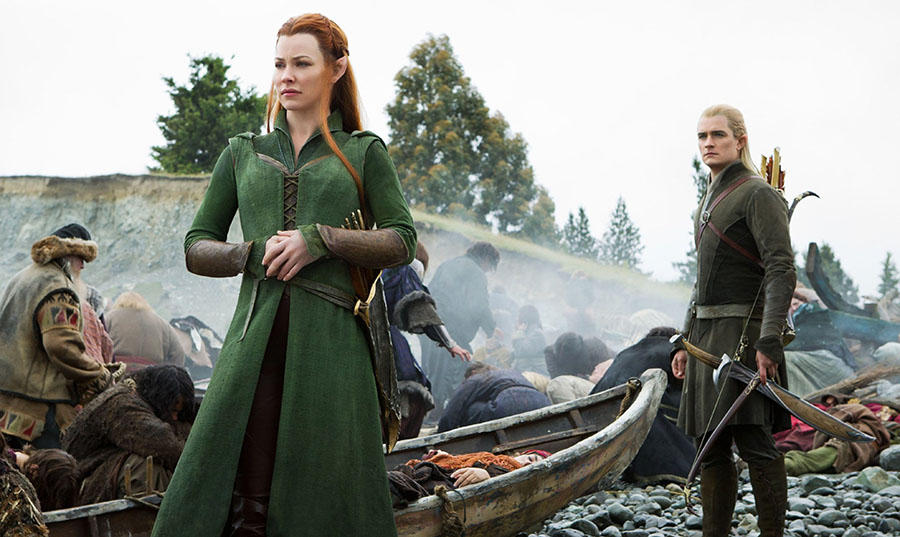 Other languages were constructed on the models of VolapükFermerConstructed language created in 1879-1880 by the German Catholic priest Johann Martin Schleyer, who during a fit of insomnia felt that God commanded him to create an auxiliary international language. The language developed quickly (there were one million Volapükists in 1889) but soon lost the majority of its speakers to Esperanto. A few dozen Volapükists remain active today, especially on the Internet and via a Facebook group. and EsperantoFermerInternational constructed language created in 1887 by Ludwik Lejzer Zamenhof, and used today by people from at least 120 countries throughout the world. as practical means of communication for international exchanges. Since science fiction dramatises extra-terrestrial civilisations, it extends the field of application beyond our planet by exploring the path of astrolinguistics, namely the conception of a “universal” language that could be used throughout the galaxy. Astrolinguistics is also an entirely real discipline. Lingua cosmicaFermerThe cosmic language (from the Latin Lingua cosmica) or Lincos is a language constructed on a logical base, with none of the vagueness, ambiguity, and polysemy of human languages. Created by the mathematician Hans Freudenthal in 1960, and refounded by the computer scientist Alexander Ollongren in 2012, its goal is to represent all human knowledge in view of sending it via radio transmission to intelligent extra-terrestrials., which connects the famous SETIFermerThe Search for Extra-Terrestrial Intelligence or SETI includes essentially American scientific projects whose objective is to detect the presence of extra-terrestrial intelligence in other solar systems. The first project was launched in 1960 at the initiative of the astronomer Frank Drake. project with the more recent METIFermerMessaging Extra-terrestrial Intelligence or METI is a branch of SETI designed to transmit a message intended for extra-terrestrial intelligence. programme, involves founding a language on supposedly universal principles, in this instance the logic of its operators: conjunction (“and”), disjunction (“or”), implication, negation, etc.

Communicating with machines as well

Artificial Intelligence (AI) is another preferred subject in science fiction. Authors very early on imagined languages specially created to communicate with machines, such as mechaneseFermera fictional artificial language imposed on a human in the book Starchild (Frederik Pohl and Jack Williamson, 1965) in order to communicate with an all-powerful machine., an intermediary between natural and computer programming language. Repetition and ambiguity are forbidden, for efficiency takes precedence. Recent sci-fi has somewhat abandoned this path in favour of widespread voice recognition and automatic understanding—and even AI. 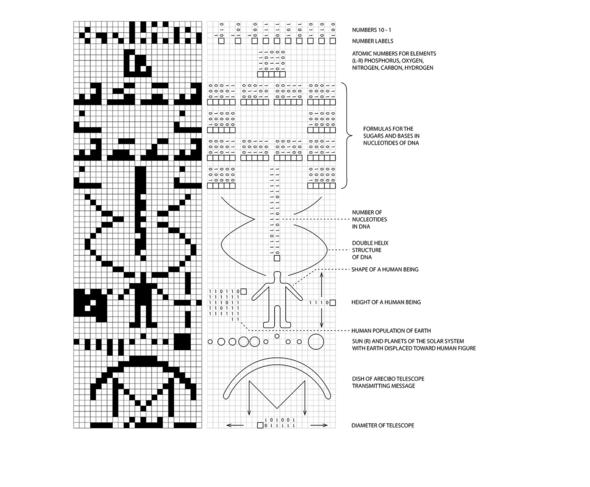 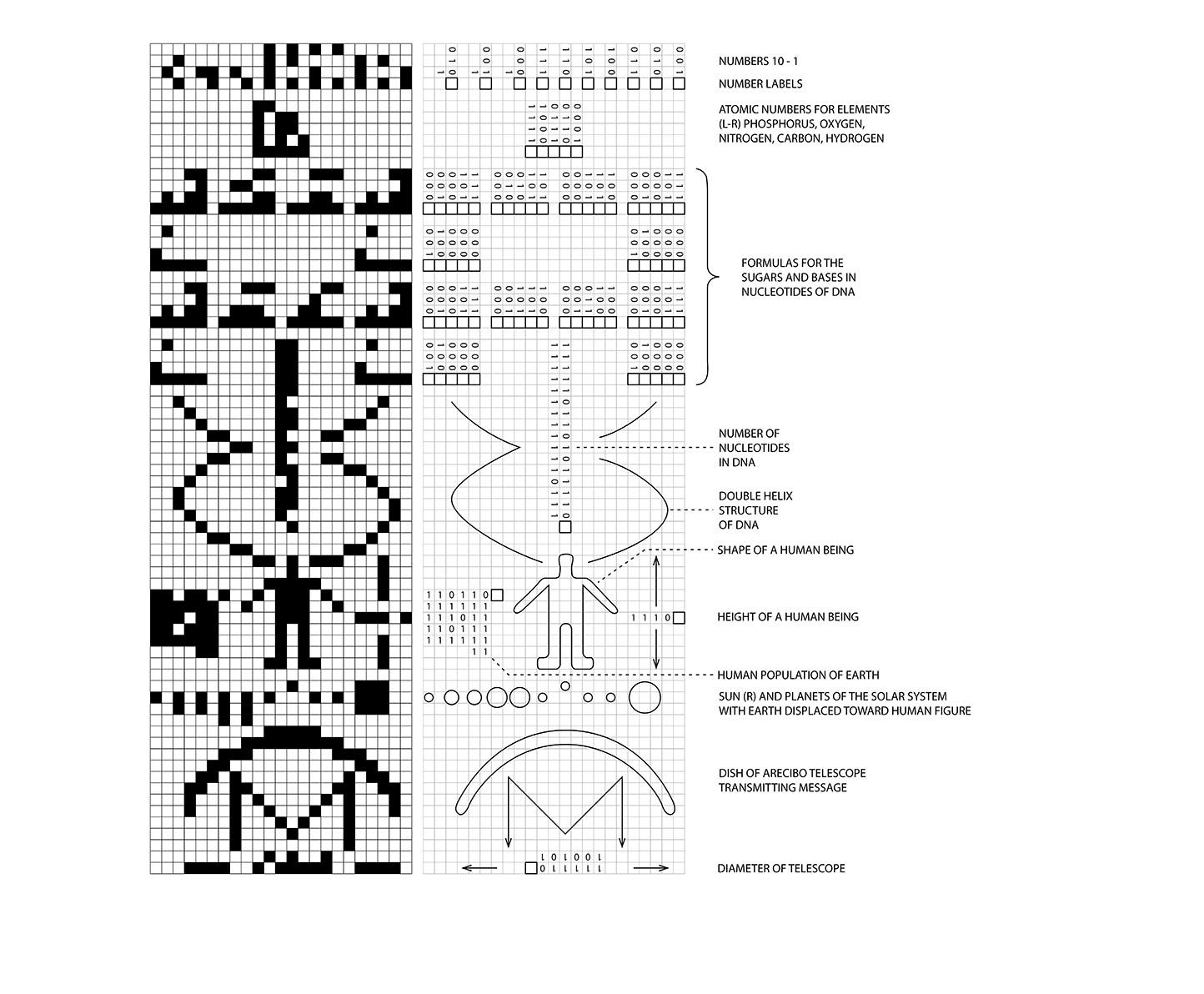 Finally, feminist science fiction has also explored the question of language—sometimes in connection with the subject of cyborgs—as a reflection of continuing inequalities in society. There are many novels, for instance Native Tongue (Suzette Haden Elgin, 1984) or Breathmoss (Ian R. MacLeod, 2002), in which a matriarchal society develops its own language, women “win out” over men, and nouns and pronouns have no gender.

By exploring multiple kinds of imaginary languages, futurism has contributed to a number of explorations regarding their universality, origin, capacity to change mentalities, etc. Only a few famous linguists are cited by science fiction authors. The first is no doubt Noam Chomsky, for his ideas on innateness and the existence of a “universal grammar.”

The author Ian Watson published a novel in 1973 inspired by his reading of Chomsky, whose title The Embedding will be familiar to those who have read his work. More than just a reflection on the mechanism of linguistic embedding, which consists in placing one sentence within another, this novel embodied a branch of SF that some, such as François Richaudeau and Marina Yaguello, have called “linguistic fiction.”

Influence over how the world is perceived

The second, or rather the pair who come in second, are Edward Sapir and Benjamin Lee Whorf for their hypothesis of linguistic relativity, which asserts that our language affects the way we perceive the world, for example time, colours, and even snow. Ever on the lookout for experimentation and exaggerations of all kinds, science fiction appropriated this idea and transformed it into linguistic determinism: our language determines our forms of perception. Put another way, in the words of Roland Barthes, terminology becomes fascist. The dystopic novel 1984 by George Orwell and The Languages of Pao by Jack Vance are typical examples of this use of Sapir-Whorf’s hypothesis: in order to make people more submissive (as in 1984), or on the contrary more aggressive (as in The Languages of Pao), a government wilfully changes lingo or imposes the use of certain words or morphemesFermera part of a word, such as the prefix “re” in “replay,” the suffix “able,” which can be used to build adjectives, or markers of gender or number. Morphemes are the smallest meaningful elements of a word. instead of others. 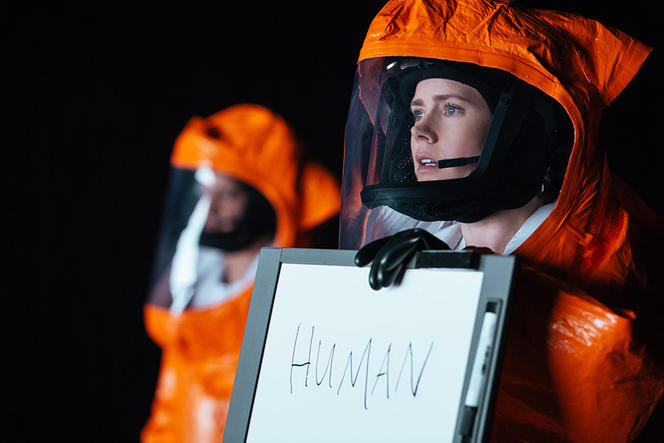 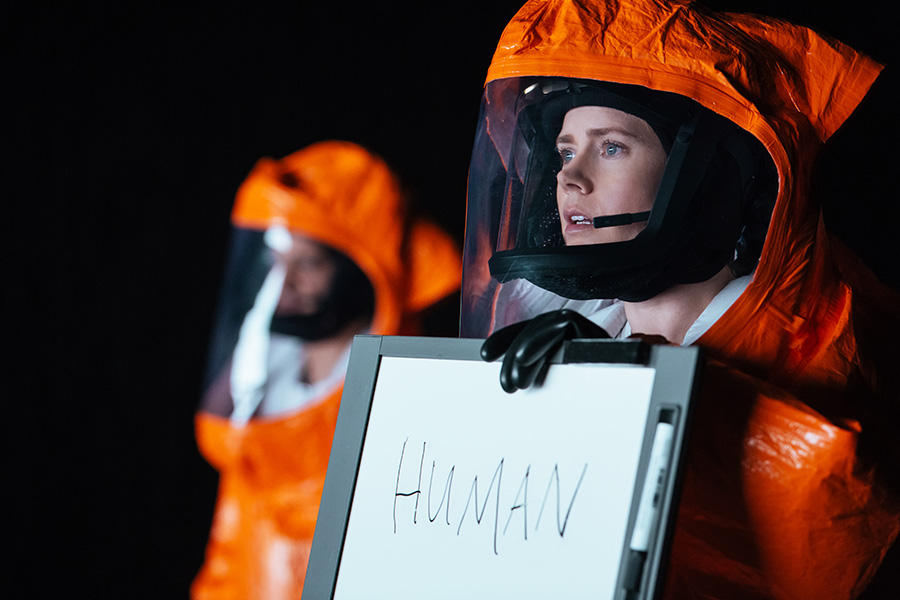 The film Arrival (Denis Villeneuve, 2016), an adaptation of the short story by Ted Chiang (Stories of Your Life, 1998), includes characteristics of linguistic fiction. The heroine Louise Banks is a linguist (a portrait of Chomsky sits on her desk); the language of extra-terrestrials (and its system of writing in particular, in which sentences form circles decorated with magnificent graphic script) is remarkably original; Sapir-Whorf’s hypothesis is used to the extreme (in learning this language, Louise Banks is transformed to the point of having visions); and universality appears in the end when the heroine receives copies of her book, entitled The Universal Language.

This goes to show that first contact with extra-terrestrials, beyond its spectacular aspect and ever-present sense of wonder, can spark reflection on language and linguistics, and even popularise some of its theories.

0
The Papuans, the Living Record of our OriginsPrevious
CNRS technologies at the CES 2020Next 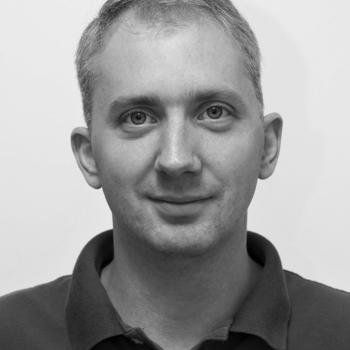 Linguist specialising in natural language processing and dialogue between humans and machines. He is a CNRS senior researcher at the LATTICE (Langues, Textes, Traitements informatiques...

10.19.2020
Opinion
What are the universal translators of science fiction worth?