Home / Opinions / Dragons, mammoths and giant wolves: what do the animals in “Game of Thrones” tell us?

Dragons, mammoths and giant wolves: what do the animals in “Game of Thrones” tell us?

Home / Opinions / Dragons, mammoths and giant wolves: what do the animals in “Game of Thrones” tell us?

Dragons, mammoths and giant wolves: what do the animals in “Game of Thrones” tell us?

As we await the release of the prequel “House of the Dragon”, scheduled for this coming autumn, here are the answers to three questions that you might not have thought to ask about the cult television series “Game of Thrones”. What glacial period does “Winter is coming” refer to? Have giant wolves ever actually existed? And are author George R. R. Martin’s dragons biologically plausible? Jean-Sébastien Steyer, head editor of the book “Le Trône de Fer et les Sciences” (“Game of Thrones and the Sciences”), offers his insights. 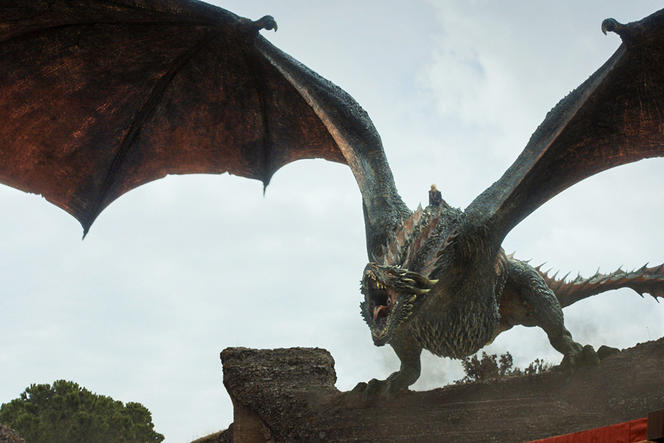 Game of Thrones heroine Daenerys perched atop Drogon, one of her fearsome, ultra-fast-growing dragons (image from the television series). 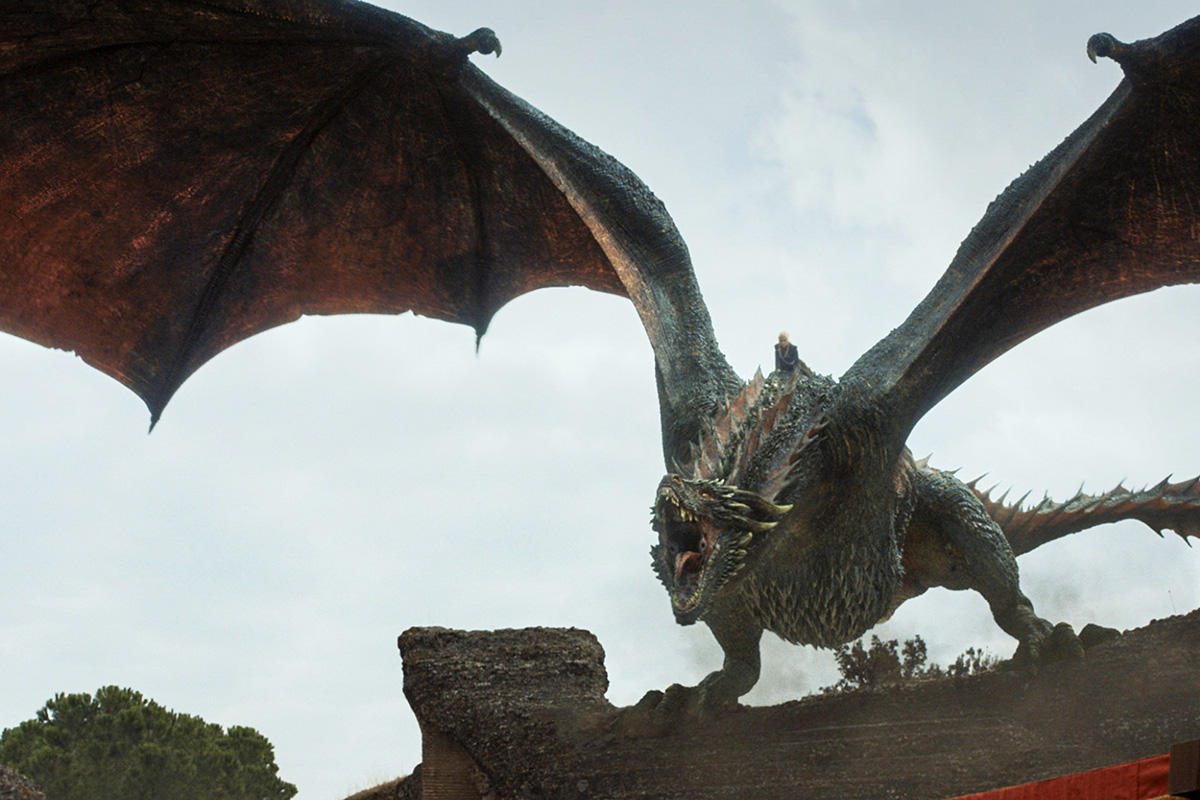 The imaginary world1 created by author George R.R. Martin in his series of novels A Song of Ice and Fire is complex, varied and described in minute detail. In the far southern regions, the jungles of Sothoryos resemble Jurassic Park, while the far north is stuck in prehistoric times. The famous glacial cold of “Winter is coming” originates in a vast territory called Beyond the Wall. It seems to correspond to one of the ice ages that took place on Earth, but which one?

To find out, let’s consider the various species present: lynx, mammoths, “direwolves” (giant wolves), aurochs, bears (including large white bears that stand four metres tall on their hind legs) and giant moose (with antlers three metres across). The latter evoke the famous Megaloceros giganteus, a cervid species that roamed our planet from about 500,000 to 5,000 years ago.

Yes, there really were giant wolves!

Martin’s “direwolves” also existed in real life. They correspond to a fossil species that was in fact a cousin of the modern-day canine. The Game of Thrones creatures were inspired by Aenocyon (or Canis) dirus, which lived in North America and Siberia from 100,000 to 4,000 years ago and whose anatomy differs slightly from that of the wolf, having shorter legs and a different skull shape. The auroch (Bos primigenius) first appeared about 2 million years ago and went extinct in the 17th or 18th century due to overhunting and the destruction of its habitat. White and brown bears (Ursus maritimus and Ursus arctos respectively) diverged into two species about 600,000 years ago, according to DNA analyses. 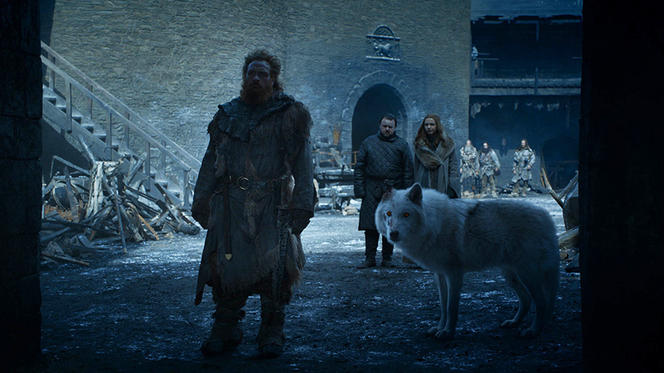 The giant wolves in Game of Thrones correspond to a fossil canine species that actually existed (image from the television series). 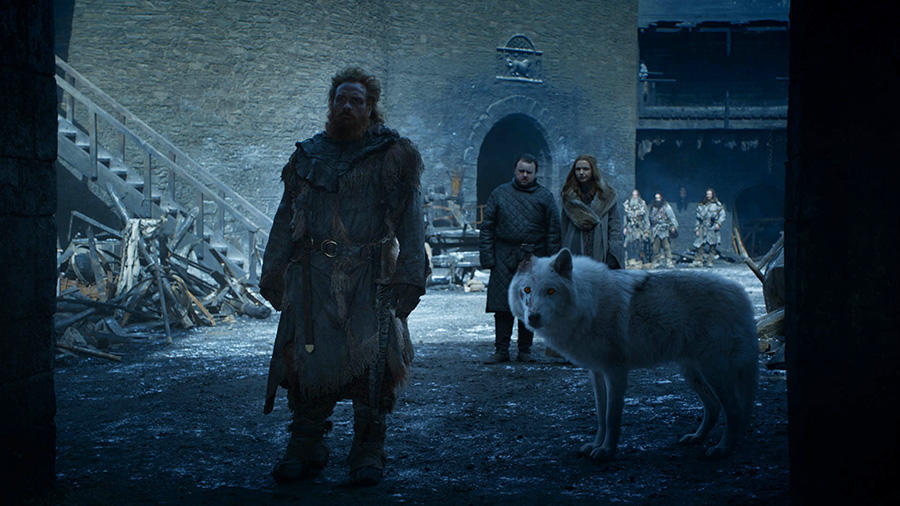 Lastly, Jon Snow, one of the main characters, was kind enough to give us a hint as to which of the dozen species of mammoth that lived on Earth corresponds to the beasts that graze Beyond the Wall: the animal is “a shaggy lumbering beast with a snake for a nose and tusks larger than those of the greatest boar that had ever lived”. Its “shaggy” coat unmistakeably identifies the woolly mammoth, no doubt the species Mammuthus primigenius, which lived from 600,000 to about 4,000 years ago.

An ice age that is fairly recent…

Now all we have to do is create a timeline showing the temporal extension zones for each species. The intersection of those zones corresponds to a timespan between 100,000 and 5,000 years ago, which coincides with the last ice age in the planet’s history, just before what geologists call the Holocene era (or the Anthropocene, for some sociologists). This period, called the “Würm Glaciation” after a tributary of the Danube, lasted from 115,000 to 11,700 years ago, which suggests that this is the approximate time frame of the long cold snap in “Winter is coming”. 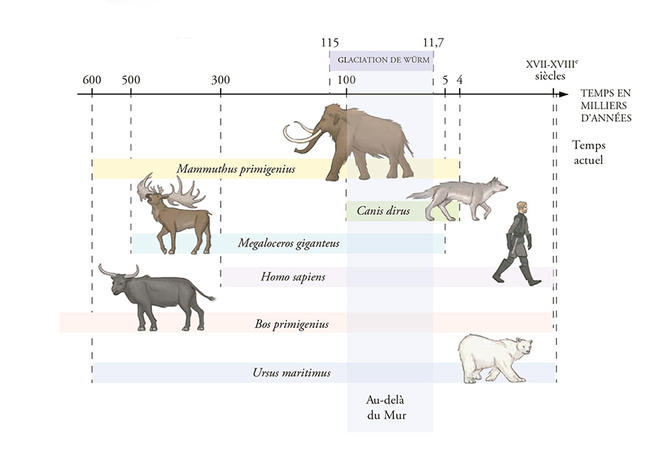 The intersection of the temporal extension zones of the species mentioned in the saga make it possible to identify the historical era of “Winter is coming”: it corresponds to the Würm Glaciation, the last glacial period in our planet’s history. 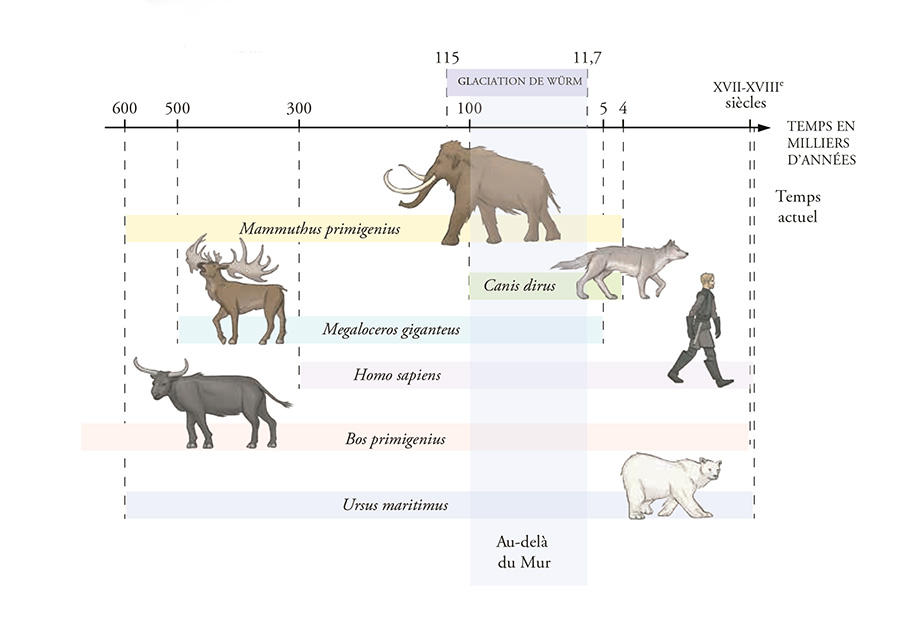 In reality, of course, palaeontologists can use other techniques like dating by carbon-14 or other radioactive elements to determine the age of fossils – and cross-check these methods with various estimates to obtain more reliable final results.

Now we come to another group of emblematic creatures in the saga: dragons. Like many real-life reptiles – either living, like crocodiles, or in fossil form, like the dinosaurs – dragons in Game of Thrones continue to grow throughout their entire lives. Their development is especially rapid during their first eight years: they are the size of a cat when they hatch from the egg, and that of a dog after four or five months. At 18 months they reach a length of two metres, and at two and half years they are as big as a horse. 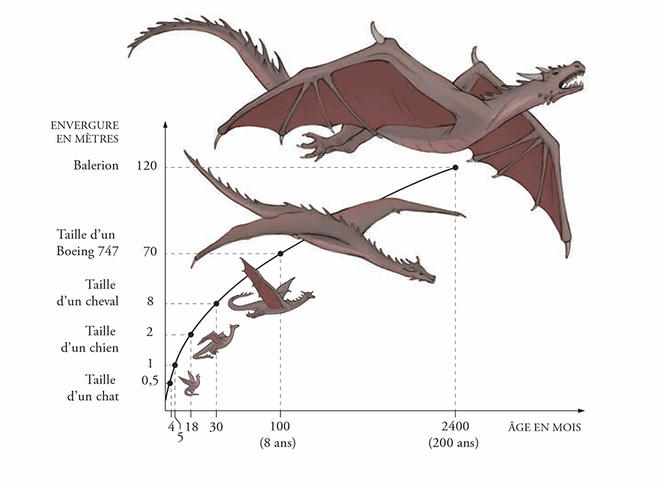 The dragons in George R.R. Martin’s novels are the size of a cat when they are hatched, the size of a horse at two and a half years, and so on… 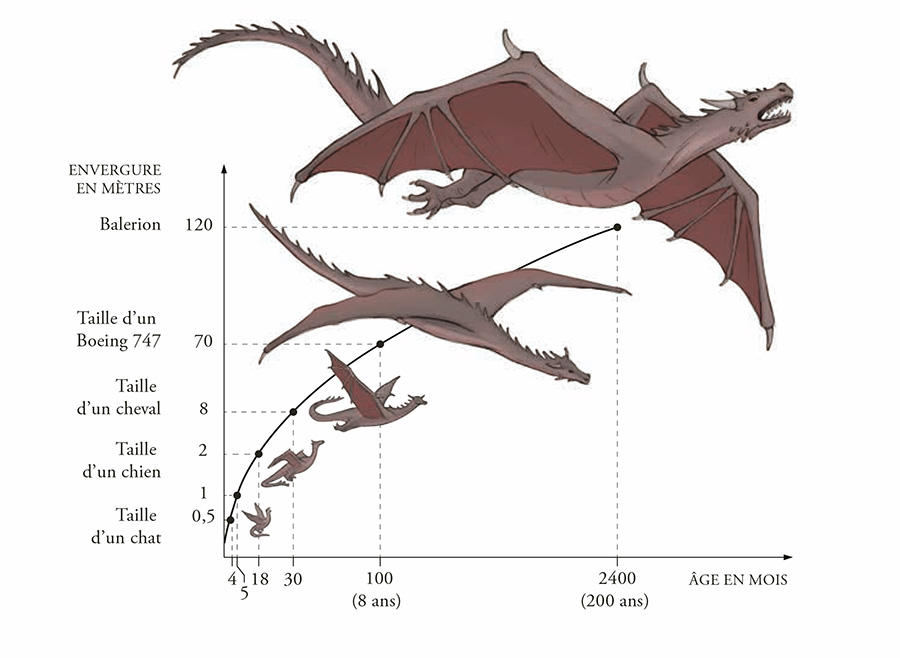 This remarkably fast, continual growth can be seen in the series. For example, Drogon, one of Daenerys Targaryen’s dragons featured in Season 7, has been the subject of much discussion on the Internet. Its size is often compared to that of a Boeing 747, which would give it a length of about 70 metres!

Martin mentions other even larger dragons, like Balerion, called the “the Black Dread”, capable of swallowing an auroch whole, which would suggest a mouth opening of at least two metres, a body some 40 metres long and a total length of nearly 120 metres. Therein, however, lies a problem: when the size of a creature is multiplied by two, its volume and mass are multiplied by 2 x 2 x 2, i.e. eight.2 In other words, those super-sized dragons become very heavy very quickly...

In the real world, the record for the mass of a terrestrial organism is held by the sauropods like Argentinosaurus, large herbivorous dinosaurs with long necks and tails. Discovered in Argentina, in rock layers dating back 95 million years (the Upper Cretaceous period), this giant lizard grew to a length of about 40 metres and its mass is estimated at about 100 tonnes.

But how could they fly?

According to biomechanical models, which analyse factors like physical constraints, for example in the bone structure, it is difficult to imagine a vertebrate that weighs more than 110 or 120 tonnes being able to walk. With such a mass, the pressure exerted on the limbs would be too great and the ankle and wrist bones would reach breaking point. In water, the weight is offset by buoyancy, offering greater possibilities – which is why the blue whale (Balaenoptera musculus) can reach a length of 30 metres and a mass of 170 tonnes.

So how could an animal 70 or 120 metres long soar through the air? The great bustard (Otis tarda), which can weigh as much as 21 kilogrammes, is the heaviest flying animal on Earth today. About 70 million years ago, pterosaurs like Quetzalcoatlus had a wingspan of up to 11 metres and a mass estimated at more than 200 kilogrammes.

To beat their wings, take off and fly in a fluid like the Earth’s atmosphere, the large tetrapods (pterosaurs, birds and bats) must ideally have a powerful musculature, hollow bones and hyper-developed lungs, possibly with other air sacs, plus large wings and a fenestrated skull – unlike the massive skulls of the dragons seen in the series. 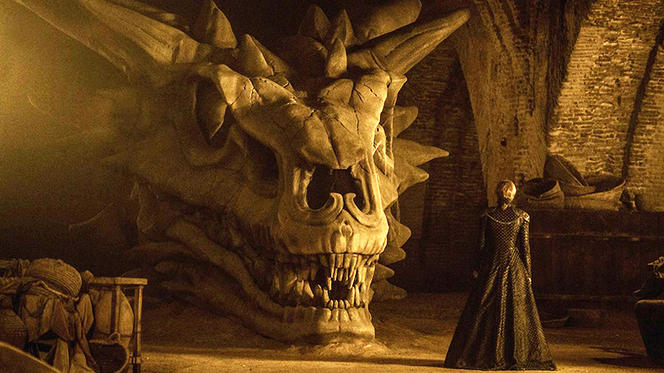 We can judge the size of the dragons from this image of Balerion from Season 5 Episode 10 of Game of Thrones, the television series adapted from the fantasy novels. 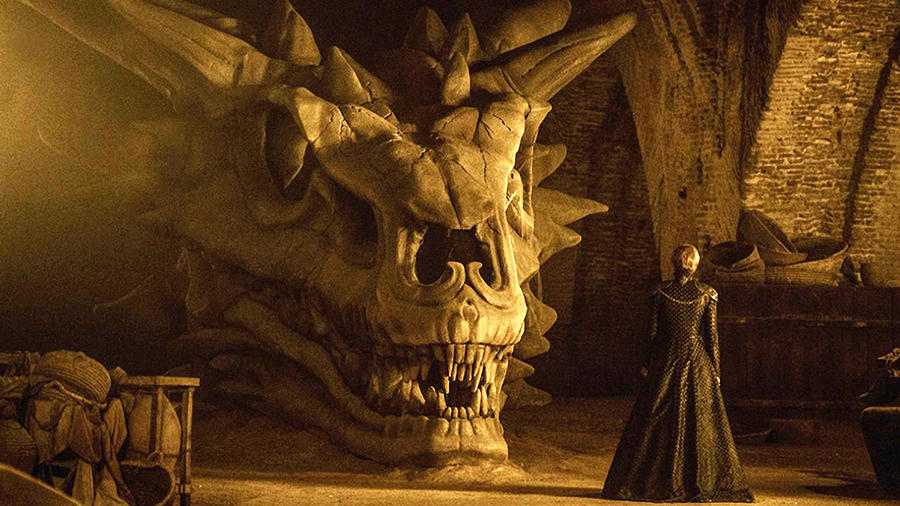 That said, Martin has adopted a well-thought-out strategy. “Other dragons by fantasy writers have four legs and two wings – I just have two legs and two wings,” he explains. “It's more scientifically accurate.” Indeed, no animal on Earth has four legs plus wings. In fact, the wings are forelegs transformed for flight, as with pterosaurs and bats. The morphology of the dragons’ alar membrane is also evoked in the text: “… each wing a delicate fan of translucent skin, gorgeously coloured, stretched taut between long thin bones”. The image of the fan clearly suggests bat-like wings.

For our dragons to fly, those wings would have to be enormous – the greater their surface area the more lift they can provide. In addition, lift increases in proportion to the square of the velocity, which means that these “heavyweights” would also have to move very quickly indeed.

To help them get off the ground, we could imagine that their anatomies include some kind of auxiliary sacs that store lighter-than-air gases like dihydrogen (H2). Such a gas could either be produced directly by intestinal bacteria (located in the colon in real-life animals) or derived from methane (CH4), also a by-product of digestion. This transformation would require water vapour, which is present in the air, and heat, supplied by the dragon’s body.

These speculative anatomical innovations make it a little easier to imagine that Daenerys Targaryen’s dragons can fly – and attack! Just like the peregrine falcon, the fastest animal alive, which can dive at a speed of 389 kph. But watch out for the landing! This hunting technique suggests the presence of easily manipulable wings. Fortunately for the dragons in Game of Thrones, this kind of mobility is theoretically provided by the makeup of their wings: multi-layered elastic membranes consisting of fibrous tissue, muscles and a vascular network, not unlike pterosaur wings. Obviously, George R. R. Martin has thought of (nearly) everything!