Witchcraft: A Scapegoat for Misfortune

Witchcraft: A Scapegoat for Misfortune

Witchcraft items like snake skin and bones, wild boar teeth, dog skull and teeth roots found on a market in Dar Es Salaam (Tanzania) in 2015.
Armin Smailovic / Focus / COSMOS
Share
Share
In some Central African countries, witchcraft accusations can quickly lead to deadly violence. But what does "witchcraft" actually mean? The anthropologist Andrea Ceriana Mayneri provides an insight into the complex social, religious and political realities that underlie this phenomenon.

Many new accusations of witchcraft have arisen in Equatorial Africa: persecutions of albinos in Tanzania, victims of kidnapping being burned or buried alive in the Central African Republic. Recent MINUSCA1 2017 reports, such as that published in 2015, point to a worrying situation. Has there indeed been a resurgence in witchcraft-related brutality in recent years?
Andrea Ceriana Mayneri:2 Based on the available information, it is very difficult to confirm the theory of such a ‘resurgence.’ Certain archived documents from the colonial-period even suggest that these phenomena may vary but their intensity remains constant. What has actually increased is the recent interest from international humanitarian organizations in the issue of witchcraft-related violence.

What exactly is meant by the term ‘witchcraft’ in these cases?
A.C.M.: It is difficult to give a single definition of the word as the very notion of witchcraft differs from one society to the other and changes over time. For us Europeans, it necessarily touches on superstition, or theological-religious issues and witch hunt. In Africa, it predated colonization but it could not be called ‘witchcraft,’ as the term is not neutral. From the missionary’s perspective, it was both a sign of depravity and a pact with the devil, with the underworld, with pure evil. The goal of the colonial administration was to protect itself against any subversive visions that could develop around the figure of the ‘native wizard,’ which is the term used in the administrative documents from the turn of the 20th century. However, the wizard, for the colonial administrators, was essentially the anti-wizard: the ganga, or witch doctor. This is a huge misunderstanding. 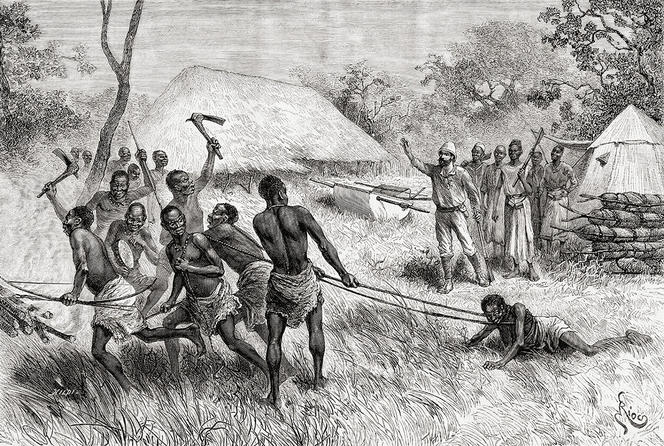 In this 1888 engraving, an alleged sorceress is dragged to her pyre in Zambue (Mozambique). "Sorcery" accusations pre-dated colonization, although this term, defined according to Western views, was not adapted to the reality of practices in Africa. 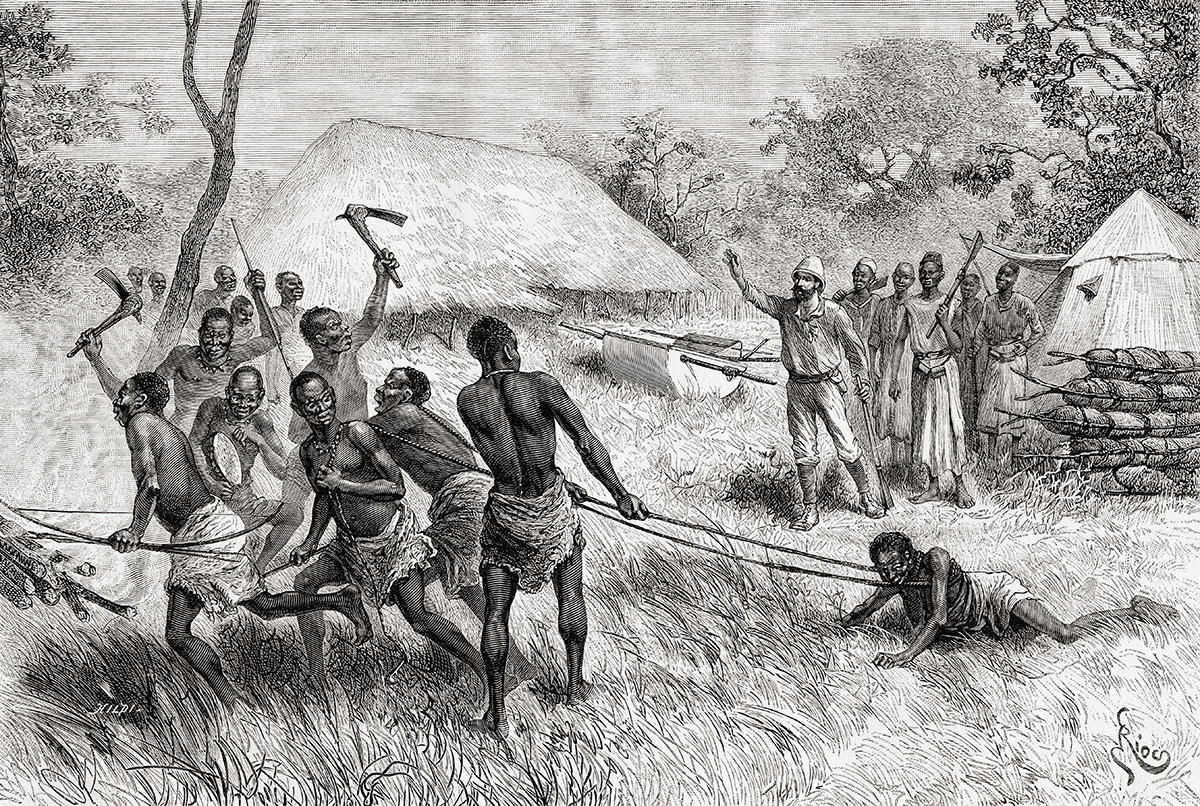 The colonial authorities fought against the gangas without taking into consideration the set of beliefs that attributes a malevolent power to an individual. The work of anthropologists like the Englishman Evans-Pritchard3 helped the British government realize that it was not wise to continue prosecuting witch doctors, as it meant attacking people whom the populations saw as their main protection against evil wizards. Evans-Pritchard is the figurehead of research on witchcraft. In 1937 he published a monumental study that highlighted the tremendous stringency of this way of thinking, even in relation to our own. We explain a sore throat as the result of a virus, while the logic of witchcraft asks, ‘Why me and not you?’ It’s a genuine social theory, which has nothing to do with religion—it has to do with power. The local populations feel that they are ‘dispossessed’ of this power. The proposition is strong enough to evolve into another kind of anti-Muslim, anti-foreigner sentiment, or rejection of people from neighboring Chad, etc.

In other words, witchcraft events and accusations observed today in countries like the Central African Republic are the symptoms of societies that cannot otherwise explain misfortune
A.C.M.: It must be considered as a mechanism used to explain events, especially misfortune.

We explain a sore throat as the result of a virus, while the logic of witchcraft asks, ‘Why me and not you?'

An accusation of witchcraft is not leveled at random. When someone suffers affliction (loss of a job, of a child, illness), the cause is often attributed to the malevolent activity of a person they know, a familiar, ill-intentioned ‘other.’ The accusation is always preceded by suspicions within a limited circle: the family, the neighborhood, the village. It can be a child, a woman, an elderly member of the community—often someone in a position of weakness. And that person is accused.

In the Sango language of the Central African Republic, rather than ‘she is a witch,’ they say ‘she has the likundu,’ or among the Banda populations, ‘she has the õndro.’ Westerners have chosen to translate these terms as ‘witchcraft,’ even though the root word kundu, for example, simply means ‘belly.’

Belly? What does it have to do with witchcraft?
A.C.M.: The common theory across Central Africa is that ‘wizards’ can be identified by a substance in their stomach, a sort of abdominal pouch. In certain communities, the pouch is described as a small, living animal concealed in the wizard’s abdomen. This belief led to a widespread practice that was banned by the colonial authorities but has now resurfaced (for example in Bangui), that is autopsies, conducted on those killed for practicing witchcraft. And sometimes, unfortunately, while they are still alive. Their abdomens are cut open in the hope of finding that pouch, substance or animal. 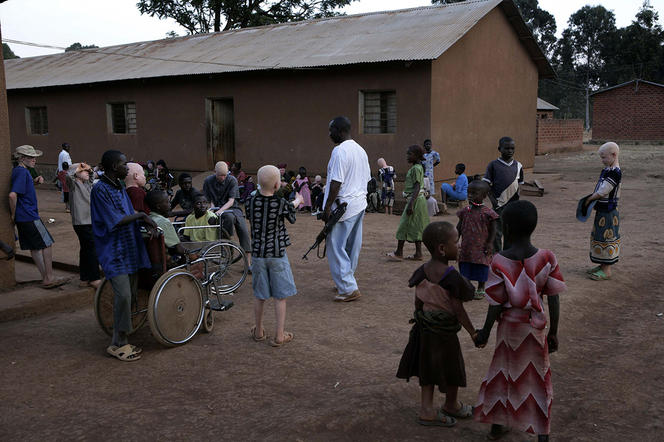 The Kabanga school in Tanzania welcomes albino victims of persecution (kidnappings, amputations ...). Albino organs are sold for use in witchcraft rituals. 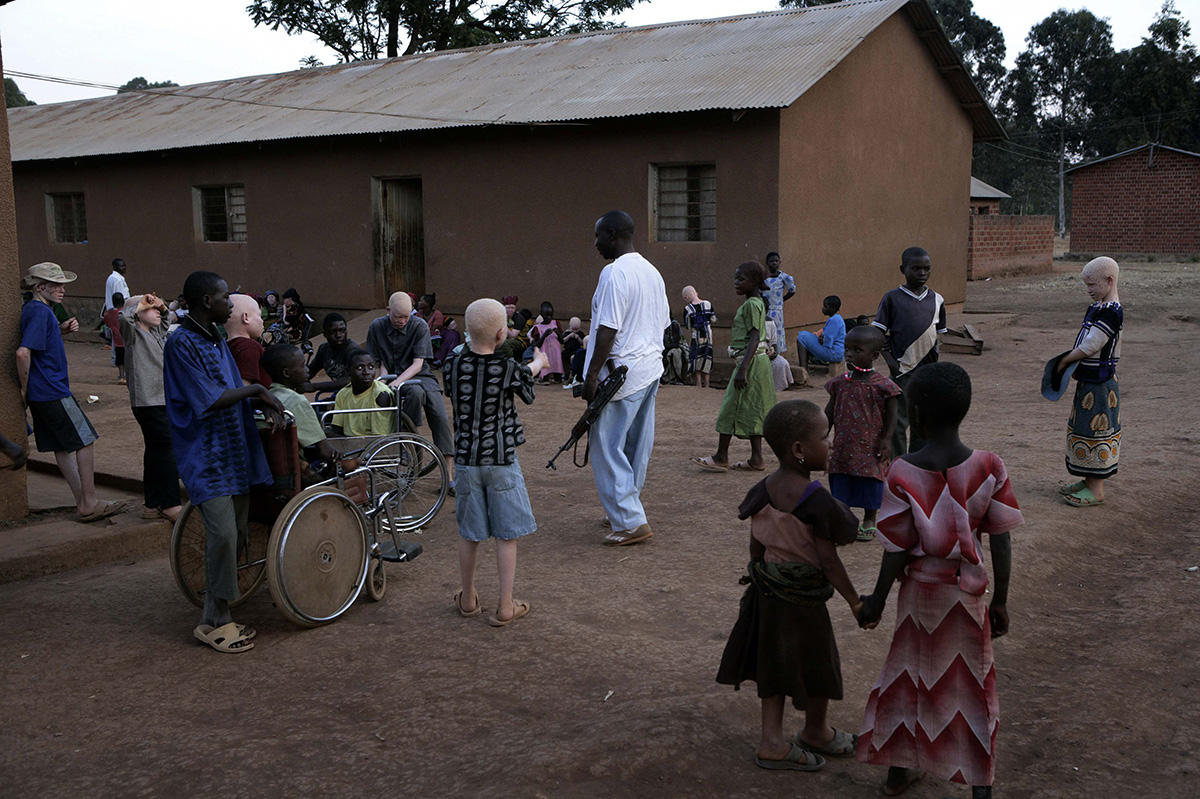 Can ‘wizards’ be identified by external physical characteristics, like the albino children persecuted in Tanzania?
A.C.M.: The Central African Republic is not one of those places—and there are many in the world—where albinos are immediately seen as sorcerers. We need to realize that we are dealing with what Patrice Yengo4 calls ‘human communities in distress,’ where people live in constant uncertainty about their own fate and that of their children. Confronted with this waste of human lives, identifying the causes of misfortune becomes a priority: ‘Where does this adversity that afflicts us every day come from?’ In this context of extreme violence, the wizard is one of the most feared, most hated figures, like the thief or the rapist. He is evil incarnate, and punished as such.

What is the process involved, from suspicion to accusation and verdict?
A.C.M.: When the suspicion is very strong, there are three possibilities. After the death of a child, for example, the family may level specific accusations against a suspect. More often than not, they take physical action, which can be collective if the suspicion is shared throughout the neighborhood. And there are precise methods. Wizards are not killed just anyhow. There is lapidation, and there is a horrifying immolation technique: a rubber tire is forced down someone's chest before being set ablaze. Certain ways of killing, like the burning tire, or ‘necklacing,’ are widely used against political opponents. This is a collective action and the method used must be spectacular, in order to annihilate not only the person’s body but also the power it harbors. At that stage, the police may intervene, but it’s highly problematic.

The second possibility is going to a ganga, the famous witch doctor we've already mentioned and who is always a keen observer of the local family and neighborhood dynamics. The ganga might say, ‘Yes, it is actually your sister, your brother, your neighbor…’ Very often they confirm the suspicion.

The biggest problem for the judiciary and for the criminal investigators is the lack of mechanisms to help them prosecute witchcraft.

The third possibility (and all three can overlap) for ‘witchcraft’ victims is to turn to a Neo-Pentecostal church or a local prayer group. They go there and queue up, waiting for their turn to talk to the pastor, who most often—in the case of Pentecostal churches—goes by the title of ‘prophet’ or ‘pastor/prophet,’ whose faith is the result of a vision or an exceptional experience.

The victims voice their suspicions, and the pastor/prophet issues a diagnosis. These churches usually substitute the idea that the evil is someone else’s doing with the notion that the victims themselves are the makers of their own misfortune. They must first be delivered from their past, from their sins. The pastor summons the demons inhabiting the victim, to bring them to the surface and force them out of the  ‘possessed’ body. Trembling, screaming, physical frenzy—it is not unlike an American televangelist show. The last case scenario is that the ‘wizard’ can also be tried and imprisoned, as a punishment by the government itself.

How do courts come into witch hunt?
A.C.M.: Most of the criminal codes of the former French colonies in Africa contain a specific article for defining and punishing witchcraft. Anyone who has been involved in the sale or purchase of human remains or bones, or who is found guilty of charlatanism or sorcery, is liable to imprisonment and fines. It is said that most of the trials in the Central African Republic are for witchcraft, and that's probably not far from the truth. The accused is sentenced to a prison term. The biggest problem for the judiciary and for the criminal investigators is the lack of mechanisms to help them prosecute witchcraft. As a result, the judges often call in gangas, whose expertise is recognized by the courts, and they are the ones who determine the defendant’s guilt or innocence. 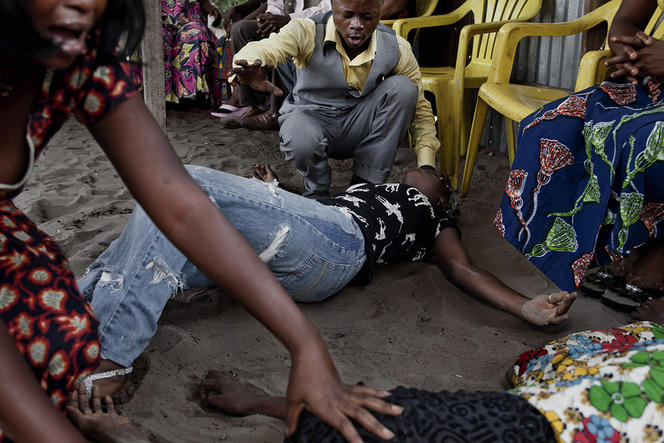 Exorcism session led by a Neopentecostal pastor in Kinshasa (Democratic Republic of Congo) in 2011. 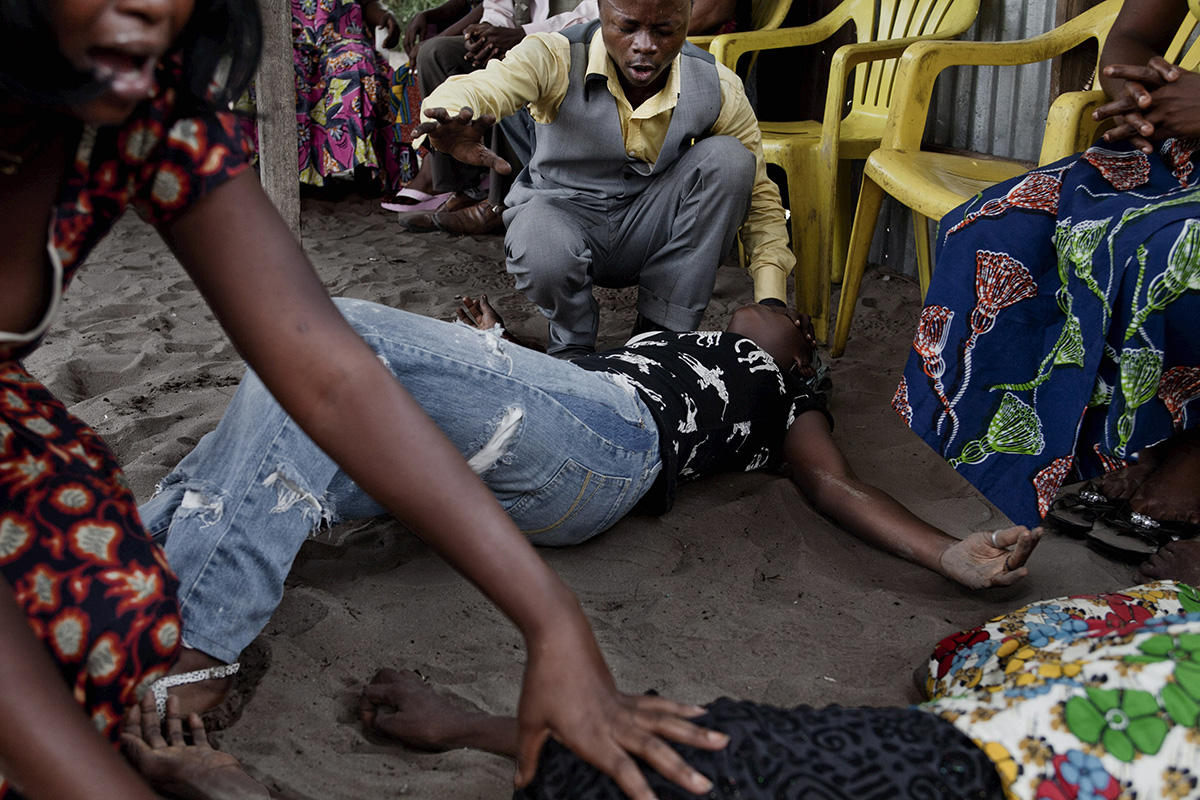 Does anyone accused of witchcraft have a chance of getting away with it? Or, as recommended by Lévi-Strauss, is it better to plead guilty?
A.C.M.: As a wizard is presumed to be a natural liar, there is no point in denying the charges. For someone accused by a group, the best strategy is often to confess, because this ‘power’ is not necessarily good or bad: it depends on the holder’s intentions. To plead guilty is to admit to having this power, which implies that it can now be used to repair the damage, for example to heal the person allegedly ‘bewitched.’ In the Central African Republic, the wizard or witch is often brought to the sick person’s bedside and called upon to heal them.

How does a researcher go about gathering data on these practices?
A.C.M.: I used to work directly in the field, in parts of the country that are now inaccessible because of the fighting. But when I was there I could simply work as an ethnologist, listening to people’s stories, their everyday lives, their experiences and concerns… And potentially, following the instructions we received for contacting religious, administrative and legal authorities—courts, churches, police stations, etc. Everything was within reach, really.