The 2014 World Cup at the Maracanã Stadium in Rio (Brazil). In only a few decades, football has changed a lot in terms of both industry and audience.
Ian Trower/GETTY IMAGES
Share
Share
The most popular sport in the world, football—known as soccer to Americans—is not just about fans: it is an intriguing topic of research for social scientists. Among them is the ethnologist Christian Bromberger, who gives his insight on the sport's many transformations over the last decades.

How has football changed since the 1980s?
Christian Bromberger:1 The outcome of the matches is less uncertain. A team with a budget of millions of euros will win against a less well-endowed opponent in the vast majority of cases. Small club managers may very well be brimming with tactical intelligence and imagination, these qualities are of little importance compared with the power of money. Uncertainty remains only for games that oppose teams of the same level, two medium-sized clubs, or during the final phases of the main tournaments. In the national championships, single-elimination matches sometimes create a surprise, when “David beats Goliath.” But these competitions are shunned by the major clubs and European organizations, precisely because there is too much risk and they have a lot to lose. In fact, this is why group qualification systems were adopted for the Champions Cup—which later became the League—in the early 1990s. With no direct elimination, a small team is even less likely to become a surprise winner. This is a shame, because part of the dramatic effect of a sporting event, its emotional power, derives from the uncertainty of the result. Unlike a film or theatrical production, the story is not determined prior to the performance, but unfolds before the spectators’ eyes.

How did football become part of the so-called “sport industry”?
C.B.: Until the 1980s, the clubs were managed by non-profit associations. A series of laws then allowed them to become professional sport corporations, with the same prerogatives as any other commercial company. Investors rushed in and the budgets exploded: the French first division’s turnover rocketed from a million euros in 1970 to one billion in 2011! This increase is related to the equally substantial rise in the cost of television broadcasting rights during that period, which represented only 1% of the clubs’ budgets in 1980, compared with an average of 44% today.

Until the 1980s, the clubs were managed by non-profit associations.

And the teams are by no means on an equal financial footing: those that have the most wins are broadcast more often and thus generate more income, creating a virtuous circle, while the others are soon relegated to the sidelines for failing to produce good results from the start. The budget differential between two clubs, which was at the most six or seven to one 30 years ago, can be as high as 25 to one today. However, this evolution would have had less impact if the players’ market had not been simultaneously liberalized and globalized. Until the end of the 1990s, a European team could recruit no more than four non-Europeans. This constraint was abolished, fueling the growth of an unrestricted worldwide market. To stay in the running, the clubs must now hire international stars at exorbitant cost.

Are the fans still as devoted to their teams?
C.B.: These evolutions did not alter popular fervor, but the situation has completely changed in nature. Identification with a club used to be perceived as a sign of a specific way of life, presumed to reflect a team’s style and athletic prowess. The AS Saint-Étienne was known for its courage and resilience, Olympique de Marseille for its flair, unpredictability and spectacular virtuosity, Juventus of Turin for its rigorous discipline… These stereotypes were mostly unfounded, but the fans delighted in recounting their team’s performance and making it an emblem of their local culture. For the young, going to the stadium to watch a game was a way of learning the values and history of their city. Similarly, the club presidents were often prominent local figures, such as industrialists, for example. The players were also kids from the neighborhood, like the “minots” of Marseille, who saved their club from oblivion in the early 1980s, or the workers of Polish descent in Lens in the 1970s. As everyone knows, the presidents and shareholders of the major clubs no longer have any ties with local history. Investors from all over the world put their money into the top teams and bring in players from pretty much everywhere. This deterritorialization is even reflected in the names of the stadiums: Chaban Delmas in Bordeaux has become Matmut Atlantique, the Vélodrome de Marseille has been renamed Orange Vélodrome… Even the national teams no longer have a distinctive style, as their members spend the rest of their time training and playing for various teams around the globe. 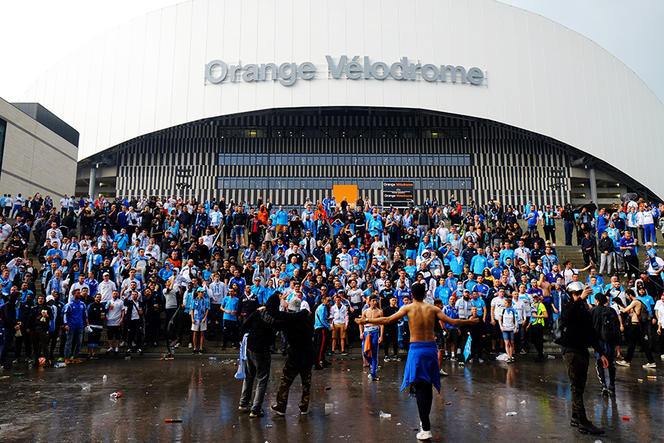 According to the ethnologist, the deterritorialization of football can even illustrated in how stadiums are named: here, the former "Velodrome Marseille" now has the name "Orange Velodrome." 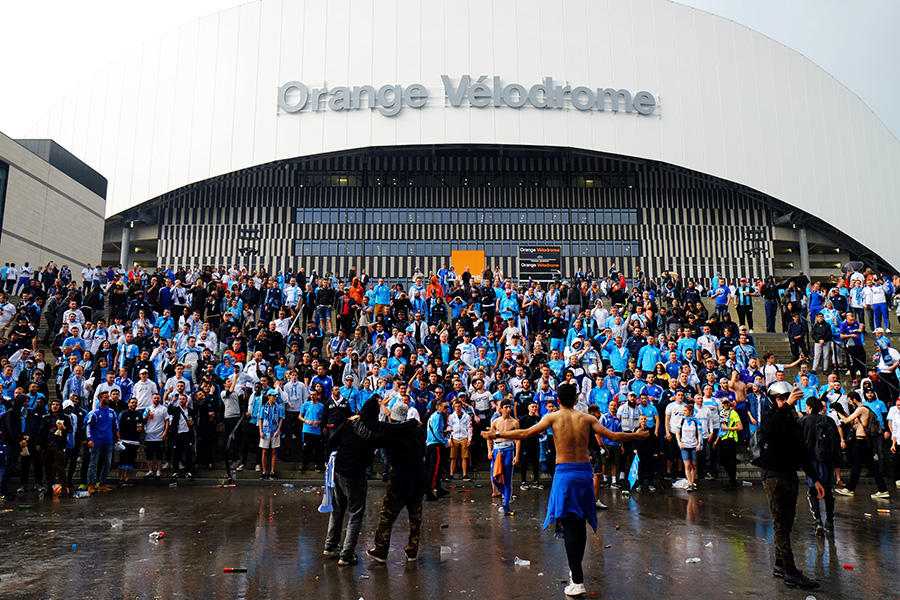 In an age of globalization, does it make sense to support a local team?
C.B.: Our era is characterized by two seemingly contradictory trends: on the one hand, a dissolution of collective identities, due in particular to globalization, and on the other hand, the perpetuation and even reinforcement of the affirmation of belonging. This is reflected in the evolution of football, along with other social phenomena. As their territorial identity erodes, fans turn toward prestigious clubs, which can be located hundreds or thousands of kilometers away.

Football thus illustrates another important contemporary trend, which is the rise of individualism. The feats of individual players get more praise than those of their teams.

Similarly, some root for two teams: one from their hometown plus a more prestigious club of international fame, which is a way of reconciling an inherited identity with an aspirational status. Another more mundane reason for this is the desire to derive more pleasure from the games, because only a partisan can fully enjoy competition. Yet a fan’s choice of a club is usually based on a community of belonging.

Football thus illustrates another important contemporary trend, which is the rise of individualism. The feats of individual players get more praise than those of their teams. In fact, football shirts did not use to feature the player’s name until the 1990s. Fans who wore jerseys showed their belonging to a community and a group. Today, the celebration of camaraderie has given way to a show of stars united under the same colors. 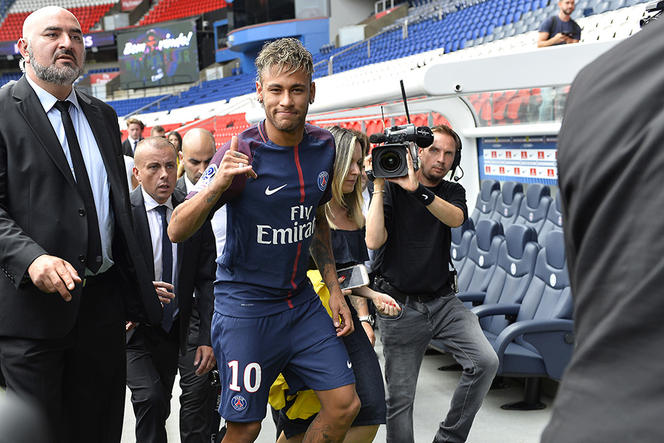 Liberalization of soccer clubs and the players' market have profoundly changed the game: to keep up with world competition, clubs must hire international stars. Pictured here, Brazilian footballer Neymar has signed a five-year contract with the PSG (Paris Saint-Germain Football Club) for 222 million euros. 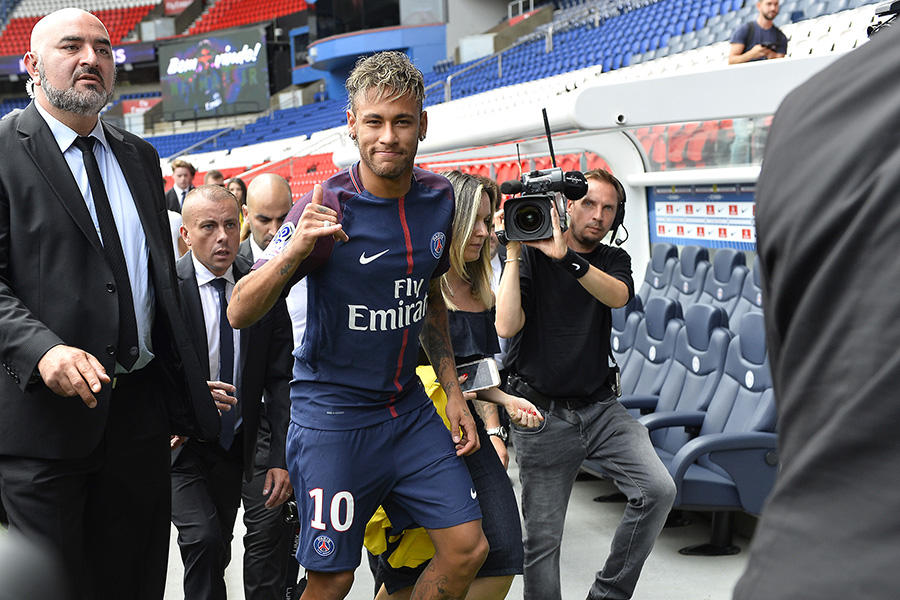 What impact have these evolutions had on the general public, other than the diehard aficionados?
C.B.: In France, match attendance has doubled, from an average of 10,000 spectators in 1980 to more than 20,000 last year. The effect of the 1998 World Cup and Euro 2016 led to the modernization and improvement of stadiums, and more generally resulted in the legitimization of football’s appeal among the upper social classes. What used to be a sport for the working class has also become gentrified: arenas are now increasingly offering shops, children facilities or even the possibility, for those who can afford it, of holding weddings there. Some stadiums remain working-class, as in Marseille, but the “gentrification of the stands,” as the researcher Roger Besson puts it, is indisputable. This is accompanied by a change of atmosphere: the fans’ songs and choreographies are gradually giving way to a quieter, easy-going ambience, orchestrated by recorded music and announcers with friendly voices. At the same time, a policy aimed at eradicating the most frantic fans, especially the hooligans, has been pursued since the 1990s. While it is perfectly acceptable of course to combat violence, these laws have somewhat curtailed the festive revelry of fandom. Security checks of all materials to be waved in the stands, the risk of criminal charges for shouting excessively virulent slogans… All of this discourages the fans from letting their hair down during a match.

Video refereeing was recently adopted for contentious decisions. How will this change the game of football in the future?
C.B.: This technicization generates as many problems as it solves. Video isolates the situation under discussion, removing it from context and even from reality. Seen in slow motion, a hand that swipes across a face becomes a slap, a foot that brushes a leg becomes an assault… The intention to commit a foul is difficult to assess, and the referee seems just as liable to error as without video. In addition, it seems to me that this type of innovation runs counter to the philosophy of the game and the spectacle it creates. As Gérard Ejnès, the managing editor of France Football, jokingly put it, “Football is not played in slow motion, but in real time.” The spirit of the game requires to either tolerate or punish a disputed action according to the overall context of the match, for example the players’ behavior or previous warnings. And more generally, do we really want well-ordered games with no lumps and bumps? Watching football has already lost its intensity and meaning. Nevertheless, it remains an entertaining, caricatural reflection of modern-day life, in which the path to success is paved with individual merit and teamwork, as well as luck, cheating and a more or less disputable justice, administered by the referee. A football match should continue to embody the contradictory forces that drive success in our contemporary world.

Article
Feminicide: naming the crime in order to fight it
Ethnology

Article
Witchcraft: A Scapegoat for Misfortune

Article
Soccer: What Are the Chances?