Installing 5G antennas on a radio mast in the Schmöckwitz district of Berlin (Germany), at an altitude of 50 metres (26 May 2020).
Christoph Dernbach/picture alliance via Getty Images
Share
Share
As mobile operators offer the first 5G subscriptions to the general public, this new standard for telecommunications raises doubts and resistance. The CNRS senior researcher Philippe Owezarski presents the issues involved.

Philippe Owezarski, you are the director of the Trustworthy Computing Systems and Networks (RISC) department at the CNRS Laboratory for Analysis and Architecture of Systems (LAAS). Can you explain what is driving the transition to 5G?
Philippe Owezarski: The growing bandwidth needs of cellular networks – and hence for throughput –are the first reason for the generation change from 4G to 5G. Users, who are increasingly hooked on streaming to mobile devices, want to watch videos in 4K on their smartphones, even though this is of questionable interest given the size of the screen. This sustained demand and the saturation of 4G are fuelling the development of new services, especially for professionals.

What are the primary changes?
P. O: In my opinion, 5G provides two things that 4G lacks: differentiated classes of service, and softwarisation. Three classes of service will soon be available, with characteristics that are specifically adapted to users’ needs and applications.

To start with, eMBB1 is a standard service compared to current cellular networks, but with a significant increase in throughput. URLLC,2 on the other hand, targets applications that have temporal constraints. It has much lower latency and hence greater reactiveness. Finally, with mMTC,3 5G can standardise communications for the Internet of Things, in which numerous protocols coexist today. These three classes of service come with the network architecture type known as network slicing, which can cut the communication matrix for time-frequency resources into different slices – each of which will provide users with the desired quality of service –  and isolate them from one another in order to avoid disruption. 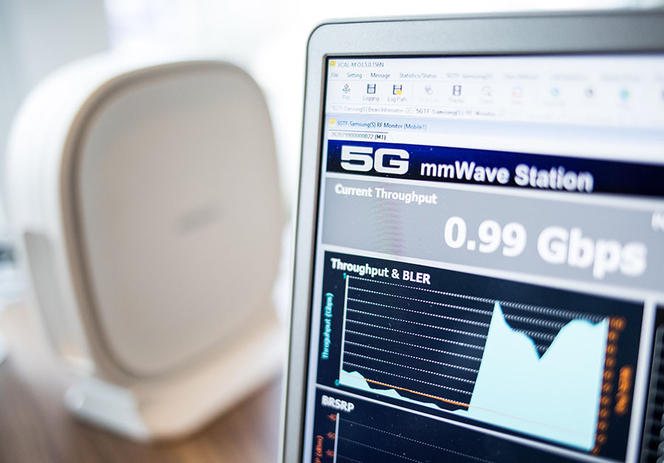 Performing a downloading speed test on a PC placed next to a receiving antenna with a 5G modem. The screen indicates a downloading rate of 0.9 Gigabits per second, which is very high (7 February 2019, Hamburg, Germany). 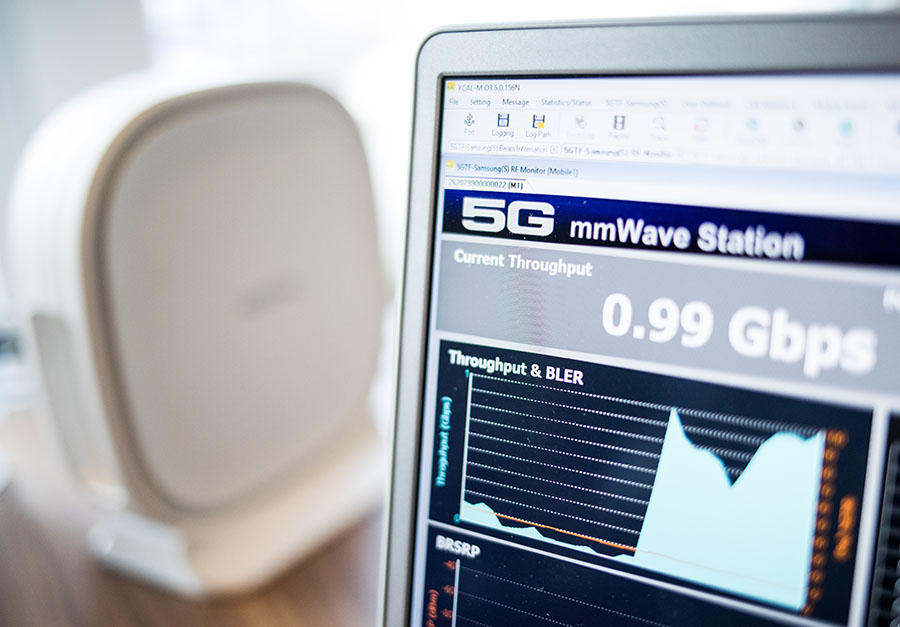 Performing a downloading speed test on a PC placed next to a receiving antenna with a 5G modem. The screen indicates a downloading rate of 0.9 Gigabits per second, which is very high (7 February 2019, Hamburg, Germany).
Christian Charisius/picture alliance via Getty Images
Christian Charisius/picture alliance via Getty Images
Share
Share

At the same time, softwarisation will make networks programmable, with no intervention required on their physical infrastructure. They will therefore become more flexible to manage, and will integrate new services more easily. For example, if user demand changes, it will be more straightforward to adapt throughput or offer specific services without physically changing the network's hardware, such as the instruments that control antennas. This notion of a software-defined network is in fashion; bricks have been gradually added to 4G, but this principle will be native to 5G.
Moreover, the new MIMO4 antennas for 5G can adapt their propagation spectrum to a specific zone or terminal, without impacting surrounding areas. This is all made possible by equipment that is fully and dynamically programmable. Artificial intelligence (AI) could even be used to optimise communications.

Along the same lines, I believe that one of the central applications will involve autonomous or connected vehicles. Their on-board artificial intelligence has shown its limitations, as it is not effective or rapid enough in decision-making. Yet every tenth of a second counts when it comes to braking to avoid a pedestrian. The centralisation of AI on servers, or a cloud, will facilitate the integration of general driving conditions, such as the state of traffic and road signs, and will also offer better calculations, for they will be performed by more powerful machines than the electronics in a car. This will considerably improve the functioning of connected vehicles, although these instructions must also be transmitted with a throughput and reactivity that only 5G can provide at this stage. This principle is not the stuff of science fiction, and local experiments will be conducted shortly. Low latency services are also of interest for remote surgery. Specialists operating remotely must have the same visual rendering for their gestures as when they are physically present with the patient.

What contributions has 5G made to research in telecommunications?
P. O: Network slicing will make it possible to reserve slices of the 5G cellular network to conduct trials in a real environment. As these slices are isolated from one another, experiments will be feasible on one slice, without taking the risk that a problem might affect the rest of the network. But we're not quite there yet, as slicing is not available on all of today's commercial 5G networks. We still have to use experimental platforms, such as anechoic chambers , which are not disrupted by external waves, and prevent us from interfering with the operational functioning of 5G networks. 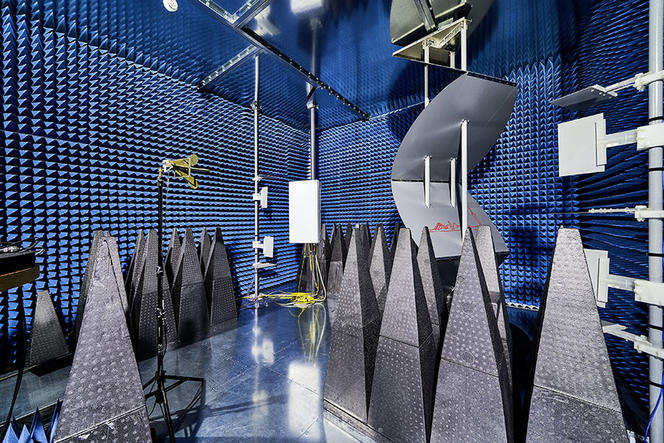 5G antenna unit (centre) placed in the corner of an anechoic chamber so as not to disrupt the functioning of other networks during the tests (5G laboratory of the Vodafone Kabel Deutschland GmbH campus in Düsseldorf, Germany, 21 January 2020). 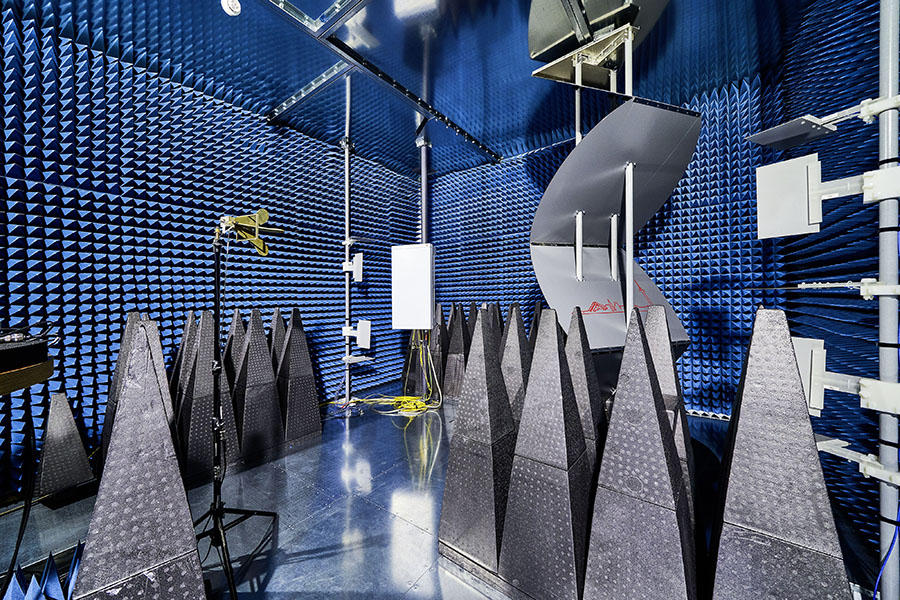 Where does the deployment of 5G stand today?
P. O: Technically speaking, we are transitioning to 5G, but in terms of service, we mainly have access to a kind of high-speed 4G. The 5G networks deployed today use frequency bands dedicated to 5G, but the allocation mechanisms for Hertz resources are not yet optimised to effectively rely on the full available spectrum. It is important to note that the difference between 3G, 4G, and 5G generations lies in the frequency bands and media access techniques they use. The software and service side will not change drastically between 4G and the 5G that is currently installed, but this will evolve very quickly, especially with the upcoming contributions of researchers. The 5G standardisation process should normally be completed in 2023.

What do we know about the health and environmental risks of 5G?
P. O: In terms of energy, the deployment of the network will of course consume electricity, but I think it will be comparable to that used by 4G. The disappearance of 2G and its antennas, on the other hand, should allow for some energy savings. I don't see how it would be a revolution; we are consuming more and more electricity in general, and at worst will remain on the normal curve for this increase.
Besides, 5G will help reduce the amount of electromagnetic waves emitted. Its massive antennas will target the locations where demand is high, rather than cover large areas indiscriminately. Yet as the increase in throughput will require more power, it is still difficult to provide a precise assessment.
With regard to health, we already had those debates when previous generations were launched. Cellular networks have been operating for approximately thirty years, and today everyone uses a mobile phone without giving it a second thought. We have not seen an increase in the incidence of brain cancer, one of the diseases that could have been caused by those networks. And while there is higher prevalence of neurodegenerative conditions such as Alzheimer's, this phenomenon is rather attributed to longer life expectancy.
I would nonetheless like to point out that I am not a specialist on these health matters, which I do not work on. I am only quoting the results of studies that I have read. Still, there is some kind of de facto moratorium on 5G in France, with the government commissioning studies to get a better grasp of its impact on health and energy consumption.

What do telecommunications hold in store?
P. O: We are already beginning to talk about 6G, which operates on millimetric frequencies and provides even greater throughput. For now I prefer to speak of "5G and after", as we do not yet know what the next generation will offer.

Article
Harvesting Energy for the Internet of Things
5G