Scientists are trying to design plasma thrusters, such as this Hall-effect thruster developed at Oracle, a joint laboratory operated by ICARE and the start-up Exotrail.
Cyril Frésillon/Icare/CNRS Photothèque
Share
Share
Higher-performance, lighter, cleaner... Scientists are using every possible means to improve the systems that allow rockets, shuttles, and satellites to take off from Earth and move about in space.

The bold manoeuvre took place on 28 December 2020: for the first time, a commercial satellite reached its working orbit after expelling a plasma consisting of iodine particles launched at very high speeds. By ejecting this ionised gas twice in 90 minutes through its nozzles, the high-tech thruster of the Chinese Beihangkongshi-1 mission exerted sufficient thrust to allow a spacecraft to rise to an altitude of 700 meters and position itself on its final trajectory. A feat that bodes well for the future: “Iodine is forty times cheaper than xenon, the fuel or ‘propellant’ commonly used by this ‘electric’ propulsion method,” explains Ane Aanesland, a former physics researcher at the LPP1 and winner of the CNRS 2019 Innovation Medal, whose start-up ThrustMe, which she founded with her colleague Dmytro Rafalskyi, designed and provided the system. 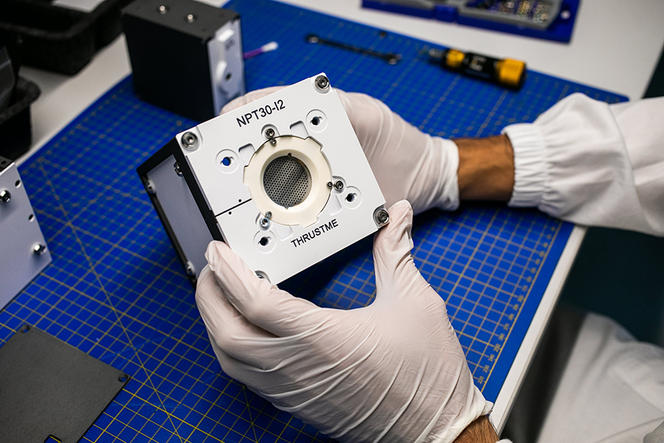 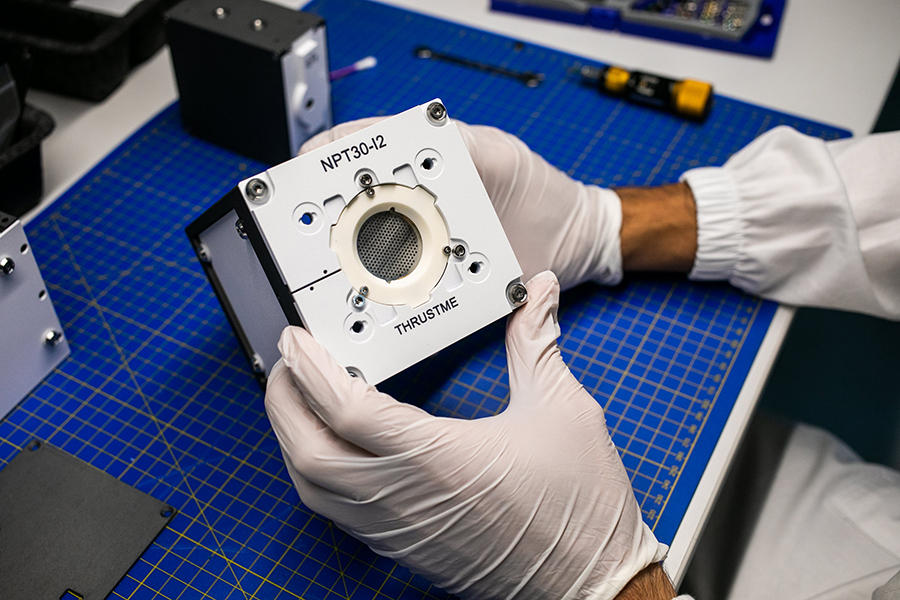 Safety of course remains the priority when it comes to launchers. To pull away from the Earth’s gravity, these devices exclusively use solid and liquid chemical fuels. This is true of Ariane 5, which takes off with the help of two giant “powder” thrusters and a Vulcain rocket engine. The latter includes a combustion chamber into which liquid hydrogen and oxygen are injected, react after ignition, and generate hot gases whose massive expulsion through the nozzle creates thrust.

Yet there is one problem, explains Laurent Selle, a researcher at the Toulouse Institute of Fluid Mechanics (IMFT)2: “In certain situations, an unstable ‘coupling’ occurs between combustion and pressure variations.” Acoustic waves make the engine vibrate, thereby increasing the risk of rupture. In 2001, such an incident caused the failure of the Ariane 5 flight 142. Hence the research conducted by Selle and his colleagues to characterise the phenomenon, using a scale model of a rocket engine located in a laboratory in Germany rather than a prototype of the Ariane 5 engine. Consisting of a series of 42 injectors, a nozzle, and a combustion chamber the size of a can of soda, this test bench fuelled by liquid oxygen and hydrogen functions like a reactor, delivering a power on the order of 80 megawatts.

In colour: instantaneous field of view for temperature from the digital simulation of a reduced-scale BKD engine. In grey: injector head with 42 coaxial hydrogen/oxygen injectors.

In connection with the Intecocis European project, Selle and his team successfully simulated – on supercomputers using the equivalent of 8,000 years of PC computing  – how combustion evolves inside this system at the moment of instability. This feat enabled the scientists to propose solutions for certain aspects of the machine’s functioning, such as modifying injector length.

Other requirements must henceforth be taken into consideration, especially with regard to the nature of the chemical fuels used. In order to carry 10-20 tons of cargo into space, Ariane 5 holds no less than 480 tons of solid “powder” in its enormous fuel tanks, in addition to 220 tons of liquid hydrogen and oxygen, whose storage and usage heavily impact the cost of launches. The same applies to hydrazine, the chemical fuel used by most satellite propulsion systems, which has the additional disadvantage of being pollutant.

Solutions of course exist. For example, the future Ariane 6 could, like other launchers, eventually abandon hydrogen in favour of methane or “green” kerosene. “But innovation is needed in order to go further,” explains Marc Bellenoue, a professor at the ISAE-ENSMA national school of mechanical and aeronautical engineering, whose group at the CNRS’s Pprime (P’) Institute in Poitiers (central western France) is trying to replace hydrazine with concentrated hydrogen peroxide (H2O2), a cleaner and more affordable propellant. This molecule, whose aqueous version is simply oxygenated water, is promising enough for potential use – in combination with other “green” liquid propellants – to power engines in the upper stages of future Ariane launchers (Ariane Next or Ultimate). 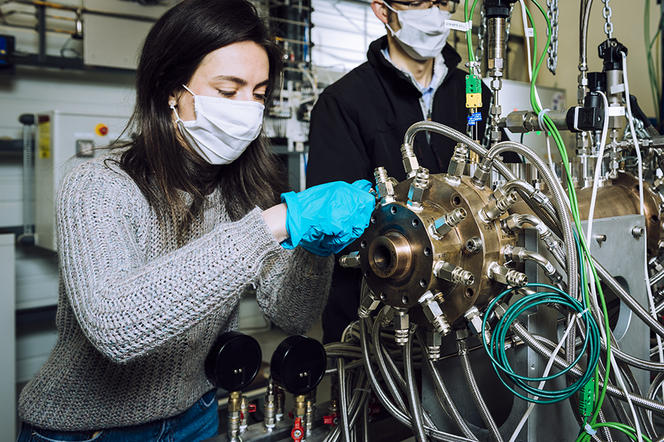 The Pergola bench installed at the P’ Institute can test new liquid propellants for space engines with a reduced impact on the environment. 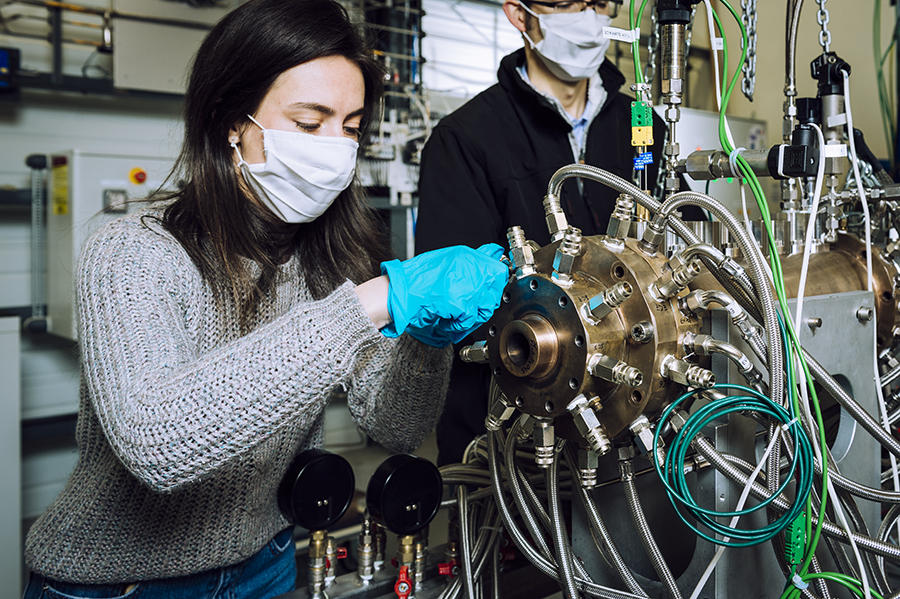 This is a possibility that Bellenoue and his colleagues are striving to verify as part of contracts with the CNES national centre for space studies, namely by using three test benches in Poitiers to study pulverisation and ignition methods, as well as the combustion of combinations using this oxidant. Researchers hope they will eventually be able to adapt this molecule to a “green” fuel in order to obtain a “hypergolic” reaction, in other words one that no longer requires an ignition system, which would facilitate its use by satellites, probes, and landers.

Until then, other technology will have taken off. This is already the case with electric thrusters. These systems use energy provided by the solar panels of spacecraft to accelerate to high speeds, and to eject plasmas through nozzles to produce thrust. They have the advantage of being very fuel efficient, although the weak propulsive force they deliver makes manoeuvres slow, thereby rendering them ill-adapted to certain applications such as obstacle avoidance, landing, or docking cargo ships on the International Space Station.

Long neglected, these processes – whose working principle has been known for more than half a century – suddenly sparked market enthusiasm in the early 2010s. Stéphane Mazouffre, a researcher at the CNRS’s combustion, aeronautics, reactivity and environment institute (ICARE) explains: “Multiple commercial missions have demonstrated that on-board mass can be reduced by extending commissioning deadlines, thereby allowing for such systems to be used more profitably to transfer large telecommunications satellites on geostationary orbits. The launch of the megaconstellation projects Starlink (SpaceX), One Web, and Globalstar also date from that period.”

Led by private companies, these programmes deploy fleets of thousands of vehicles in low orbits in order to provide new Internet services. This objective could never be met without  significantly reducing the cost of constructing, launching, and operating satellites.

A wide range of thrusters and performance

This is the primary asset of electric thrusters: by consuming less, they can chip away at the size of fuel tanks, thereby reducing the mass and volume of space engines, and subsequently lowering the cost of launches. They can also go further, as demonstrated by numerous projects – ranging from Deep Space 1 (NASA) to BepiColombo (ESA-JAXA)3 and Hayabusa (JAXA) – dedicated to exploring the Solar System.

At the ICARE laboratory in Orléans (central northern France), scientists have long devoted themselves to studying this large family of systems, which differ from one another by their thrust mechanisms and performance. The team, which was involved between 2003 and 2006 in the SMART-1 demonstration mission of the European Space Agency, is known for its know-how in the field of “Hall thrusters”: it created Europe’s most powerful example (25 kilowatts), which it has miniaturised since 2018 as part of a joint laboratory with Exotrail, a start-up specialising in micropropulsion for CubeSats (nanosatellites). The team actually has expertise in a much larger range of processes such as “vacuum arc”, “liquid metal”, or “radiofrequency” thrusters and much more, including futuristic projects for solar sails! 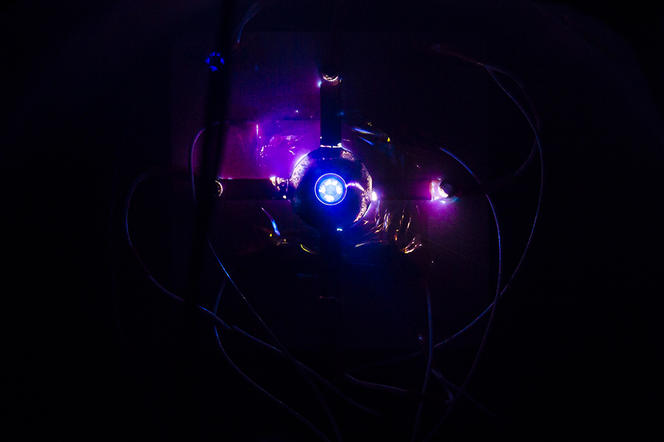 Vacuum arc thruster from the company COMAT. This comprehensive propulsion system does not use fuel, and can fit in a 10x10x10 cm3 cube. 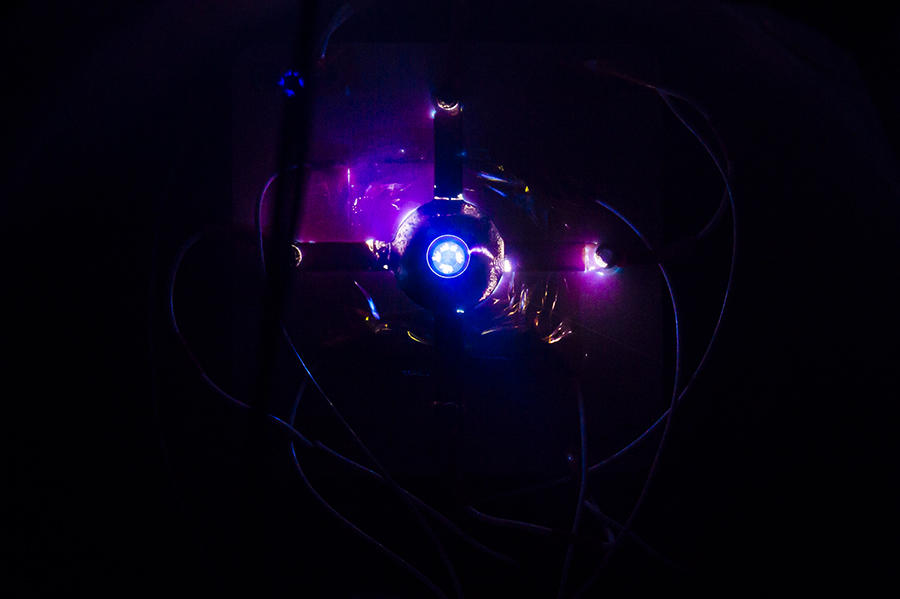 And yet there is no doubt all of the possibilities of these technologies remain to be discovered, Aanesland believes. ThrustMe, which employs some twenty people, offers its clients “turnkey” electric thrusters that it assembles and performs quality control for. The primary advantages of these systems is the nature of their fuel, which is not the commonly used gas xenon, but affordable and easy-to-use solid-state iodine. Also, a new acceleration system will soon eject charged plasma through nozzles to produce thrust. In the future it could operate without a component known as a “neutralizer”, an additional step toward miniaturisation... and nanosatellites soaring to the stars.

Article
First-ever physical model consistent with the history of the...
Engineering

Article
Harvesting Energy for the Internet of Things
Satellite