Home / Articles / The little-known powers of our gut microbiota

The little-known powers of our gut microbiota

Home / Articles / The little-known powers of our gut microbiota

The little-known powers of our gut microbiota

Illustration of the gut microbiota, which gives an idea of the 100,000 billion bacteria, viruses and other microorganisms that make it up.
Christoph Burgstedt / Adobe Stock
Share
Share
With its 100,000 billion bacteria, viruses and other microorganisms, our intestinal microbiota is not just essential to our digestion. Research is now revealing its increasing influence on the immune system, growth, and conditions such as depression, diabetes or Crohn’s disease.

Traditionally confined to the role of pipework to facilitate the passage of food, the digestive tract has now earned its status as a noble and multifunctional organ. Promoted to being a “second brain” with 500 million neurons spread throughout its length, our gut in fact harbours a broad range of bacteria, phages, archaea, viruses and other non-pathogenic fungi that work for our everyday welfare. These 100,000 billion microorganisms, which develop during birth from maternal faecal and vaginal flora, mainly establish themselves in the small intestine and colon and account for more than half of our cells, weighing up to two kilos in adults. Referred to as the “gut microbiota”, this ecosystem continues to intrigue biologists.

“High-throughput DNA sequencing has already enabled us to identify more than a thousand different microbial species in the human gut (the intestinal metagenome), but some of the genetic sequences do not correspond to any known species,” François Leulier, director of the Institute of Functional Genomics of Lyon (IGFL)1 points out. “We are therefore still a long way from knowing all the actors in this community.” Numerous questions remain regarding the interactions that link these microorganisms and those between this population and its host. 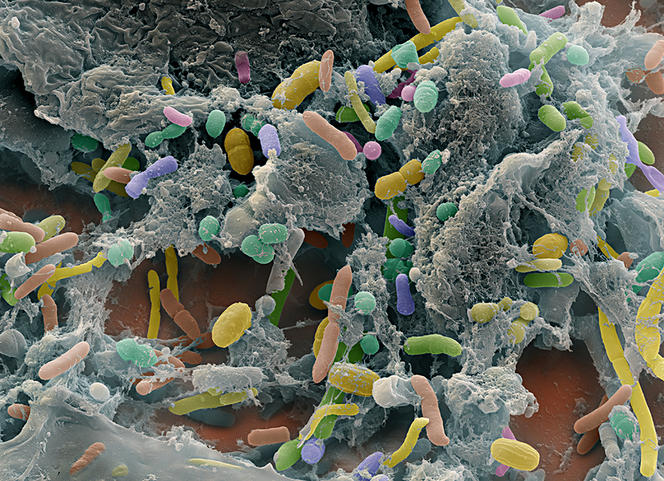 Different bacteria in a sample of human faecal matter seen through a scanning electron micrograph (SEM). Mainly beneficial to digestion, they make up the gut microbiota, but some of them are pathogenic. 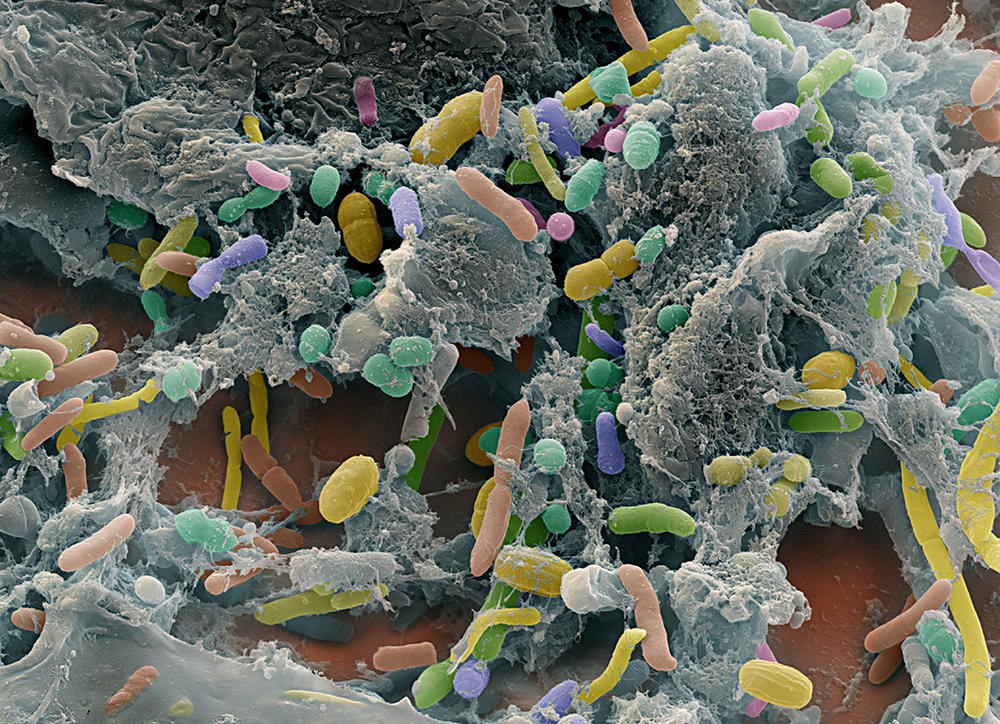 However, the secrets of the gut microbiota are being revealed one after another, starting with those related to digestive and nutritional functions. A plethora of microorganisms thus ensure the fermentation of non-digestible foods, facilitate the assimilation of nutrients by supplying enzymes, contribute to the absorption of fatty acids, calcium and magnesium and participate in the production of several vitamins (K, and some group B vitamins). Better still: the microbiota compensates for the negative effects of a protein-poor diet on childhood growth.

“Indeed, bacteria in the gut microbiota help to optimise the physiological reactions involved in growth during the juvenile phase, even when protein input is insufficient,” explains Leulier. “We were the first to demonstrate that axenic mice (i.e. without a gut microbiota), whether they received satisfactory or deficient nutrition, gained less weight and were also smaller than standard mice.2 In other words, the nutritional stress caused by protein deficiency had a greater impact on the body in the absence of a functional gut microbiota.”

An essential ally to fight infections

The microbiota is also indispensable to the immune system. Of course, it fights the implantation in the gut of harmful intruders, but it also “remotely ‘arms’ the lungs against viral and bacterial infections, while at the same time releasing various molecules such as fragments of bacteria or metabolites, and particularly short-chain fatty acids,” comments François Trottein from the Center for Infection and Immunity of Lille (CIIL).3 “Researchers are gathering more and more proof of the influence of the gut microbiota on pulmonary immunity.” Indeed, the gut bacteria that synthesise vitamin B2 also secrete a metabolite essential to the development of a key type of white blood cells. “These are MAIT (Mucosal Associated Invariant T) cells, or specific T lymphocytes involved in the defence against pathogenic agents in the gut mucosa, which are also present in large numbers in the blood, liver, lungs, adipose tissue and pancreas, etc.,” adds Agnès Lehuen, director of the Immunology of diabetes team at Institut Cochin.4 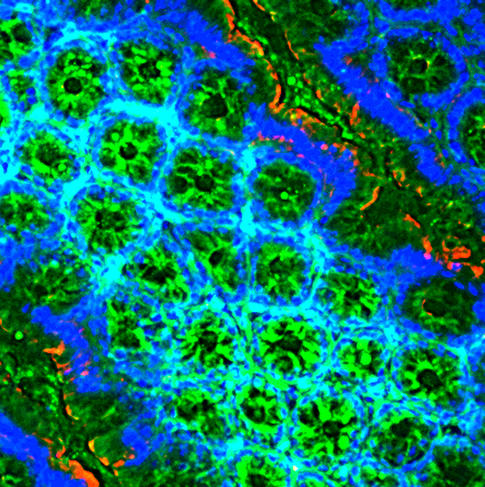 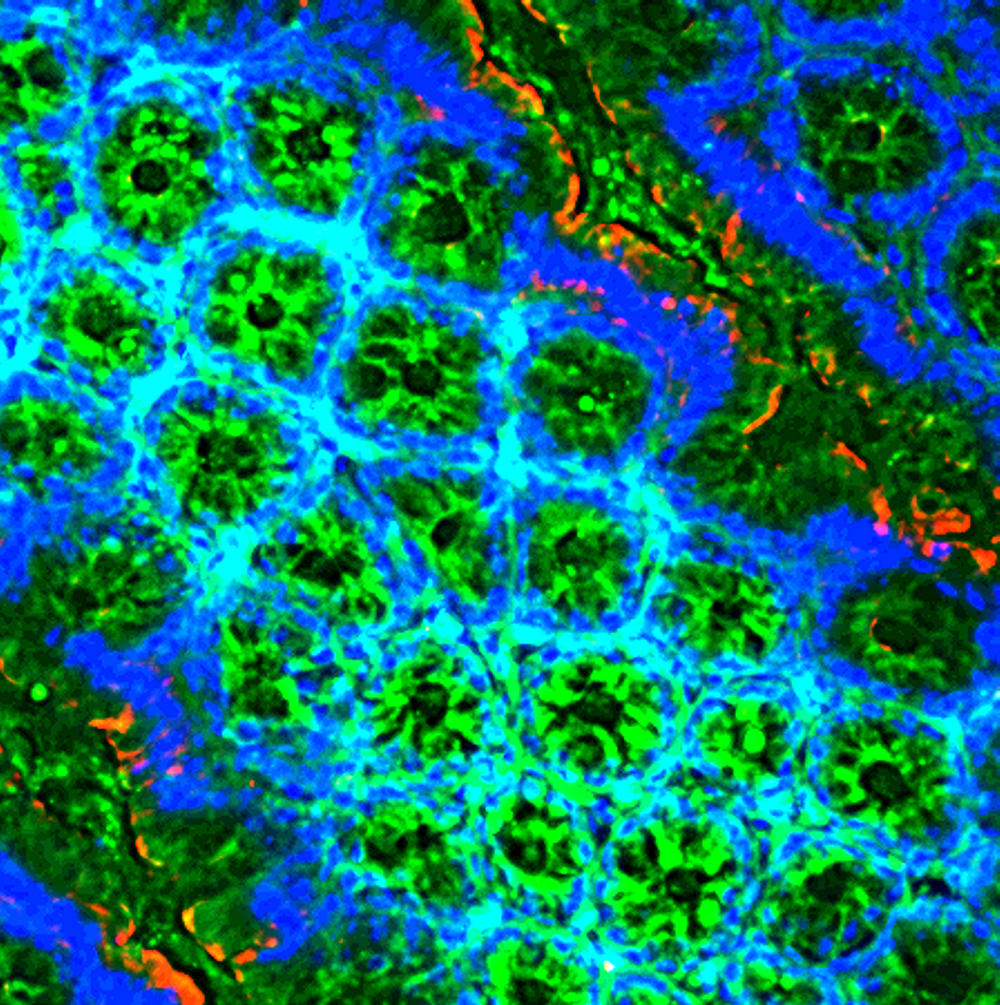 An intermediary between the gut and the brain

Another field of intense investigation concerns the relationship between the gut and the brain. The permanent dialogue between our gut ecosystem and our brain cells via the blood, immune or nervous systems has enabled numerous discoveries. For example, using brain imaging techniques, neurobiologists recently demonstrated in the mouse that components in the microbiota act on a brain region that regulates appetite.
“When we eat, fragments of gut bacteria (muropeptides) pass into the blood after a few minutes and move towards the brain,” explains Pierre-Marie Lledo, director of the Perception and memory laboratory at Institut Pasteur.5 “After crossing various barriers, they are detected by a receptor6 inside cells – in particular immune cells – which cause neurons in the hypothalamus that control hunger to rest. In other words, the gut microbiota sends the brain a satiety signal via bacterial components.”

Microglia – immune cells in the brain which protect it from lesions and infections – also display links with the microbiota. These cells, which participate in the “pruning” of supernumerary neurons and connections, colonise the brain parenchyma during foetal development. Scientists have studied them in axenic mice. 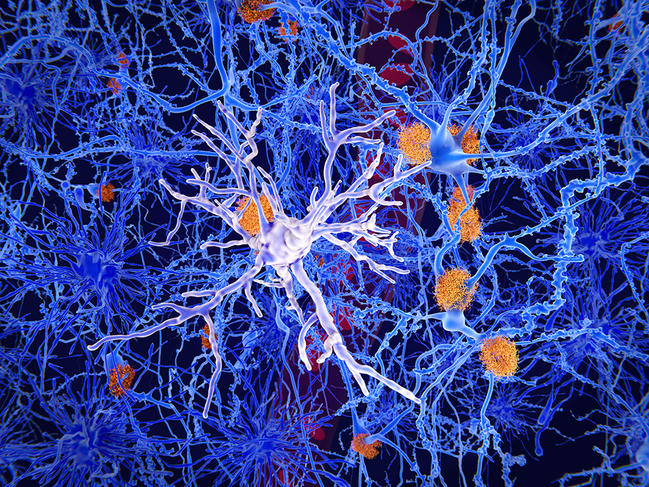 Illustration of a microglial cell (centre, in pale mauve), a macrophage specialised in the “pursuit” of amyloid plaque (here shown in orange). Characteristic of Alzheimer’s disease, these cells cause the degeneration of neurons. 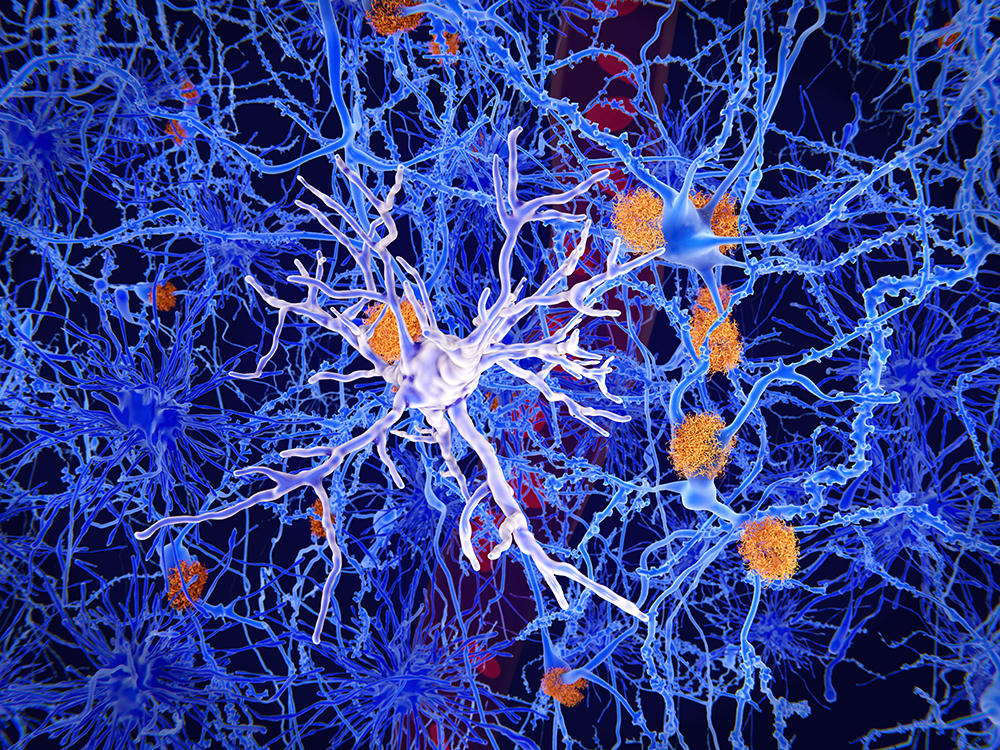 They found that “microglia in their embryos – and particularly male embryos – were affected by the absence of maternal microbiota during gestation,” explains Morgane Thion at the Institute of Biology of the École Normale Supérieure (IBENS).7 “However, once these embryos reached adulthood, altered microglia were mainly found in the female mice. This sexual dimorphism, which is still little understood, is reminiscent of that seen in certain pathologies associated with microglial dysfunction: for example, numerous neurodevelopmental disorders are more common in men while other autoimmune or neurodegenerative conditions such as Alzheimer’s are more prevalent among women.”

A key role against viruses and autoimmune diseases?

A plethora of clinical and experimental studies are thus examining the links between dysbiosis (an imbalance of the gut microbiota) and disease, starting with influenza and Covid-19. “We knew that viral respiratory infections disturb the composition and functionality of the gut microbiota,” Trottein explains. “As a general rule, infection causes a depletion of beneficial bacteria (Actinobacteria, Bifidobacteria, Faecalibacterium prausnitzii, etc.) and an increase in harmful ones (Escherichia, Shigella, Prevotella, etc.). Our recent work on influenza showed that in parallel to local disorders (abdominal pain, diarrhoea, breakdown of the integrity of the intestinal barrier, etc.), intestinal dysbiosis can impair the defences at the pulmonary level and give rise to bacterial superinfection of the lungs.”

Hence the idea to preventively reinforce the microbiota of subjects who are more susceptible to acute respiratory infections (the elderly, individuals with comorbidities, etc.). “The consumption of dietary supplements enriched in plant fibre to feed our good bacteria, or the administration of probiotics, can limit the severity of such infections, particularly if this strategy is based on an analysis of the gut microbiota in high-risk populations,” the scientist advocates. 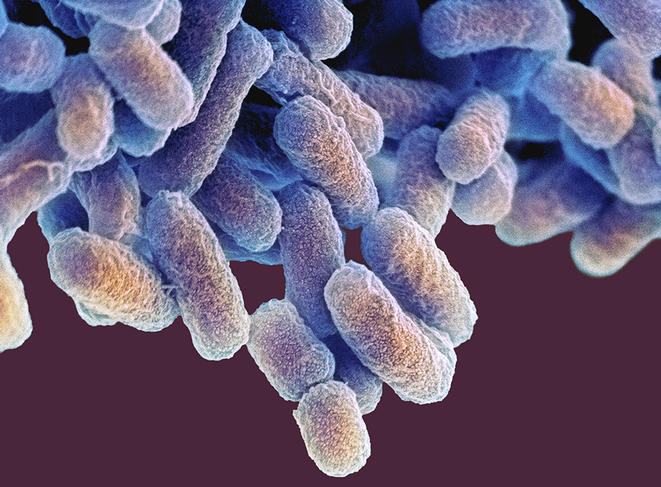 Colony of Escherichia coli bacteria in the normal human gut microbiota seen under a scanning electron microscope (SEM) and stained. Some strains produce a toxin that causes severe or even fatal diarrhoea, particularly in young children or the elderly. 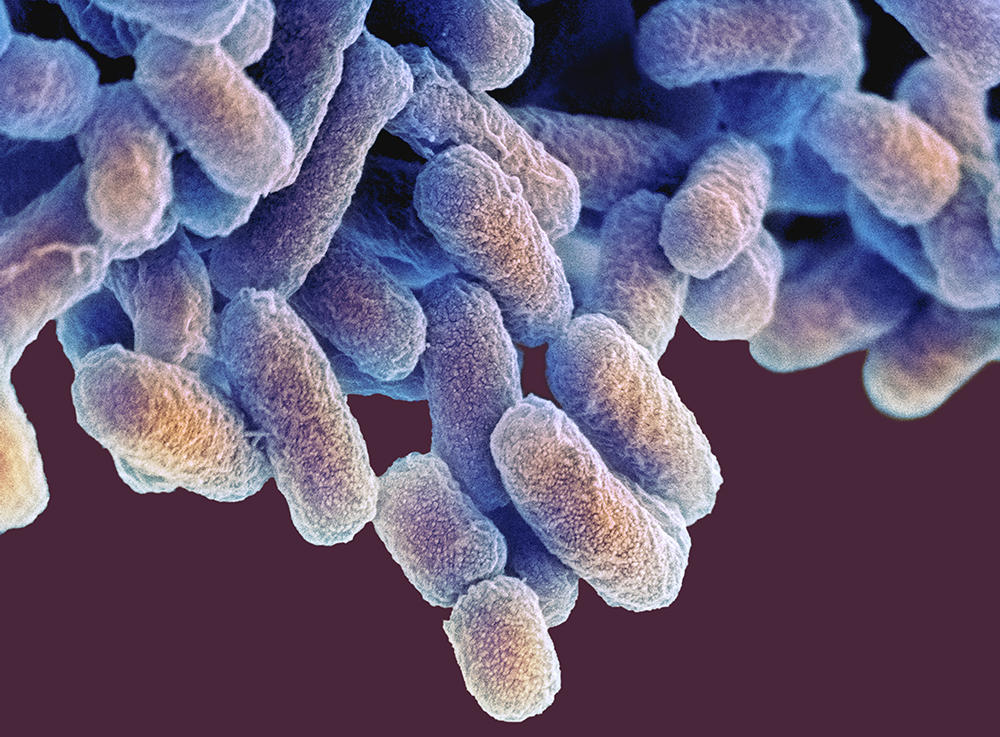 Numerous studies have also underlined the importance of the gut microbiota in the field of autoimmune diseases, dysfunctions that cause the immune system to fight normal cells in the body. Particular targets of this work include Crohn’s disease, rheumatoid arthritis and type-1 diabetes. In the latter, the immune system attacks insulin-producing cells in the pancreas, insulin being the hormone that allows cells to store glucose.
If its levels are not managed, glucose is found in excessive levels in the blood and causes chronic hyperglycaemia, condemning patients to insulin injections for the rest of their lives. “We also know that cells in the immune system (T lymphocytes) that attack pancreatic cells can migrate to the gut and trigger an inflammation that affects the composition of the microbiota, Lehuen explains. “The number of segmented filamentous bacteria, known to stimulate the entire immune system, then drops significantly.” As a result, inflammation of the intestinal barrier and of the pancreas is mutually amplified, and damages these organs, which in turn contributes to the abnormal immune reactions that cause type-1 diabetes.

How can this vicious circle be broken? “New therapeutic strategies are based on manipulating the microbiota (administration of probiotics, autologous faecal transplants, etc.). These low-risk approaches could improve the management of this disease,” Lehuen believes. “They are currently being tested in several international phase I and II clinical trials.” 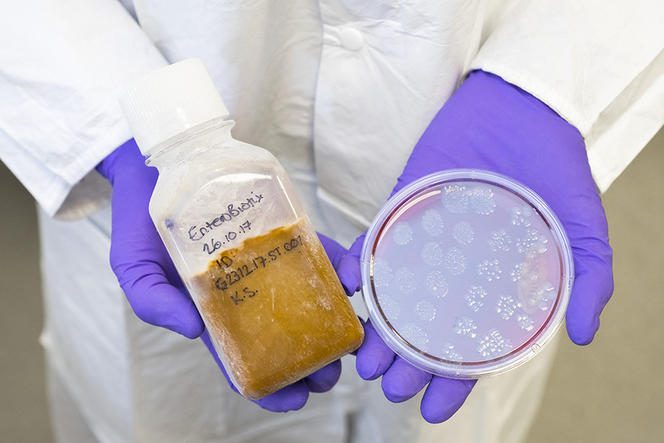 After dilution and filtration, this frozen stool sample forms part of the process for transplantation of the faecal microbiota designed to restore the balance of bacteria and other microorganisms in the colon. This technique is being tested for use in severe or incurable diseases. 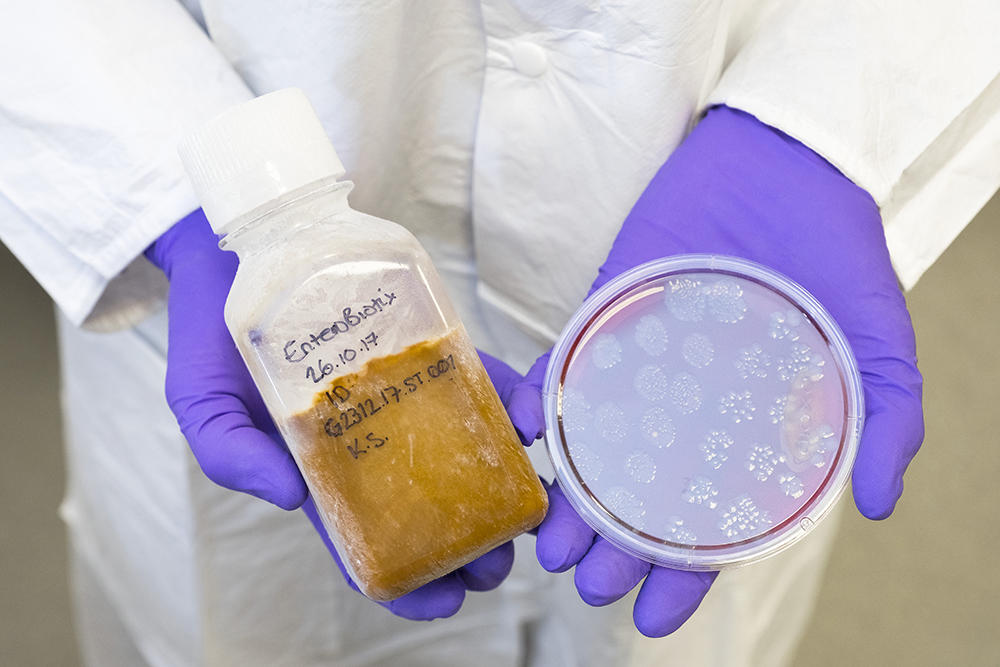 Other scientists are trying to clarify the link between abnormalities of the microbiota and neuropsychiatric disorders such as schizophrenia, autism or depression. This new field of psychomicrobiotics is seeing exponential growth. There is no longer any doubt that more than 90% of serotonin, a neurotransmitter involved in controlling mood and associated with a state of well-being, is produced by bacteria that proliferate in the gut. Nor that an imbalance of this population, induced by chronic stress, causes a collapse of endocannabinoid levels in the blood and brain.

“We recently discovered8 in the mouse that an absence of these molecules in the hippocampus, a small brain structure involved in the formation of memories and emotions, caused depressive behaviours,” comments Lledo. “These disorders disappeared when the diet of depressed mice was supplemented with lactobacilli, a family of gut bacteria. These favour absorption by the microbiota of arachidonic acid, a polyunsaturated fatty acid present in eggs, fish, chicken or beef and a precursor of endocannabinoids. It is highly probable that within a reasonable delay, a change to the diet, coupled or not with an intake of prebiotics, probiotics or postbiotics, will provide real benefits in the treatment of depression.”

Obesity, cardiovascular diseases, allergies, neurodegenerative diseases and cancers, etc., are also correlated to dysbiosis, whether this is the cause or the consequence. Combining standard treatments and interventions designed to restore good functioning of the microbiota could therefore become generalised in the near future. For example, there is every indication that the response to certain chemotherapies and immunotherapies is dependent on the composition of the gut microbiota (a large share of which is specific to each individual). Studies designed to supplement the list of bacteria involved and to develop tools that will improve the tumour response of patients are under way. And it is likely that the microbiota still holds many promising medical surprises in store. No doubt this will sharpen the appetite of laboratories working on the largest reservoir of bacteria in the body!

Article
Françoise Gaill, the voice of the oceans
Health