Tuberculosis Vaccines: France to Host the Sixth Global Forum in 2021

Tuberculosis Vaccines: France to Host the Sixth Global Forum in 2021

Saint-Pierre Bridge and the Dome de la Grave reflecting in the Garonne river in Toulouse, France.
antoine2K/Stock.Adobe.com
Share
Share
For the first time since it was created in 2001, the Global Forum on TB Vaccines will be held in France, and more specifically in Toulouse, from 20 to 22 April 2021. The promoters of the French candidacy, Isabelle Saves and Olivier Neyrolles at the Institute of Pharmacology and Structural Biology (IPBS) , present this sixth edition of the event.

What is at stake in the research on tuberculosis vaccines?
Isabelle Saves: Infectious diseases are the leading cause of mortality worldwide and tuberculosis is on the frontline, with ten million new cases each year. In 2018, it claimed 1.5 million lives (more than AIDS and malaria taken together). It also affects the most vulnerable populations, with eight countries alone  accounting for two-thirds of tuberculosis cases in the world, according to the WHO.
Olivier Neyrolles: Today, BCG (Bacillus Calmette-Guérin) remains the only effective injection against tuberculosis. Its discovery early in the 20th century enabled a drastic reduction in infantile mortality from this disease. However, over time, the vaccine has been shown to provide uneven protection in adults against pulmonary tuberculosis, the contagious form of the condition, with an efficacy ranging from 0 to 80%, depending on the study. Novel and more effective strategies, including new vaccines or a different use of BCG, are now essential to reduce the prevalence of the disease and envisage its eradication.While this is still a long way away, recent studies have proved highly promising; in animals, the efficacy of new vaccine strategies has achieved 50%-90% protection. This bodes well for the future!

How is France – and more specifically the CNRS – involved in research on infectious diseases such as tuberculosis?
I.S.: France has always made global health a priority in its international development policies by focusing its investment in multilateral health funds. It occupies a strategic position and enjoys considerable influence in terms of global health. 2019 was a turning point for our country, which was recognised as a leader in this field. During its chairmanship of the G7, France placed particular emphasis on taking on health challenges as a means of fighting inequalities. In addition, it maintains privileged relationships with French-speaking countries in Sub-Saharan Africa and south-east Asia, which are among the most affected by tuberculosis.
O.N.: The BCG vaccine was discovered and administered for the first time in 1921 by the French scientists after whom it was named, and several French laboratories are still involved in research on tuberculosis injections: particular mention should be made of laboratories at the Institut Pasteur, Institut Pasteur de Lille  and our own, the Institute of Pharmacology and Structural Biology (IPBS) in Toulouse (southwestern France), which boasts a tuberculosis department with six dedicated teams. These laboratories take part in all research programmes in the field, which have received funding from the European Commission since 1998. In particular, Brigitte Gicquel, a Professor at the Institut Pasteur, has played a key role in the early developmental stages of live attenuated vaccines (i.e. containing a living but non-virulent infective agent) which are currently in the clinical trial phase, and especially the MTBVAC jab, developed in Spain by the University of Zaragoza and the firm Biofabri. Prof Gicquel coordinated the first European research consortium on tuberculosis inoculation, the Tuberculosis Vaccine Cluster, which has now been renamed TBVAC2020 as part of the Horizon2020 programme. This consortium is also involved in work on the next generation of subunit (containing antigenic proteins) and live attenuated vaccines. 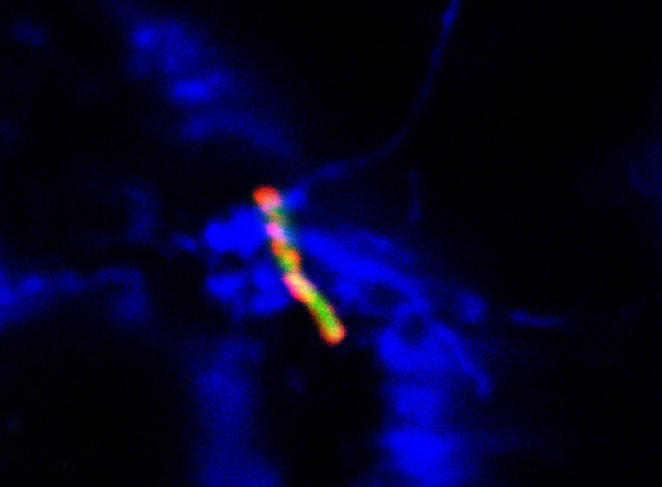 Confocal microscopic view of the BCG strain (in green) producing the glycolipid PGL-1 on its surface (in pink) and infecting a human macrophage (in blue), a cell of the immune system specialised in the elimination of pathogens. 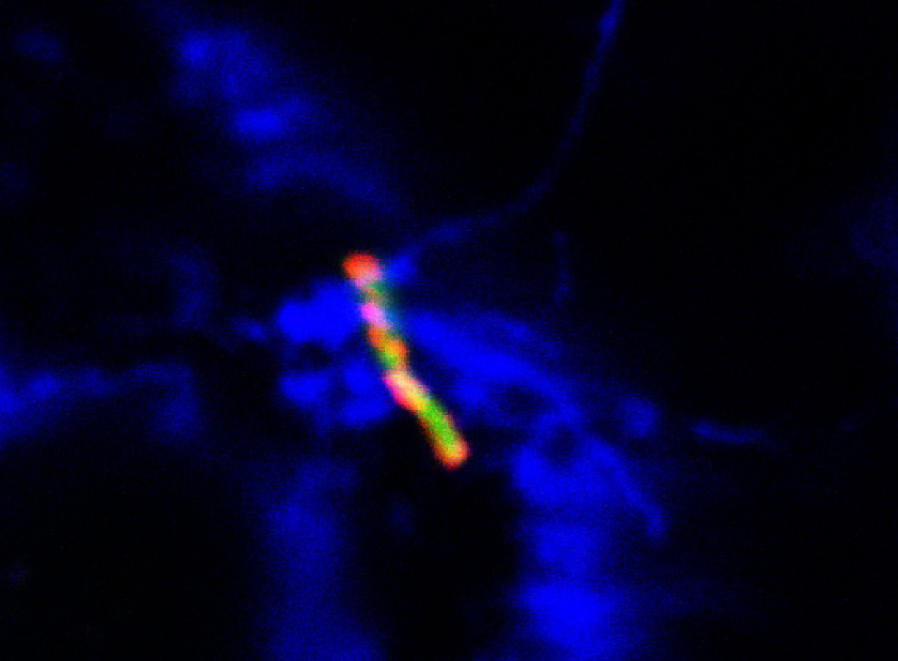 What does the choice of France as host country for the 6th Global Forum on TB Vaccines represent?
I.S.: It recognises France’s role in the fight for global health. The forum will be held under the patronage of the French President, Emmanuel Macron, and the Minister for Solidarities and Health, Agnès Buzyn, with the support of Frédérique Vidal, Minister of Higher Education, Research and Innovation. This involvement at the highest level of government, as well as the federation of all national actors in the field, were decisive in the choice of the French candidacy. France has a long tradition of global health policy. Last October, it hosted the Replenishment Conference of the Global Fund to fight AIDS, Tuberculosis and Malaria, three worldwide pandemics. This event was an opportunity to federate the international community and sponsors around this crucial issue. The political context is therefore very positive. Organising the Forum in Toulouse will give greater visibility to our country’s actions and leadership in terms of both research and political decision-making related to these challenges.
O.N.: After five editions of the Global Forum, the last of which was held in 2018 in New Delhi in India, the organisers  wanted the next event to take place in Europe, so that, among other reasons, it could coincide with the launch of Horizon Europe, the next European Framework Programme for Research and Innovation. It is indeed crucial to ensure that account is taken of infectious diseases, including tuberculosis, among the health challenges to be addressed by this new programme, scheduled to run from 2021 to 2027. The choice of France is also a scientific recognition of the country’s commitment to research on tuberculosis vaccines; first of all, of course, with the discovery of BCG itself — which was first tested in humans a hundred years ago — and that of several new candidate vaccines currently in their preclinical and clinical phases. 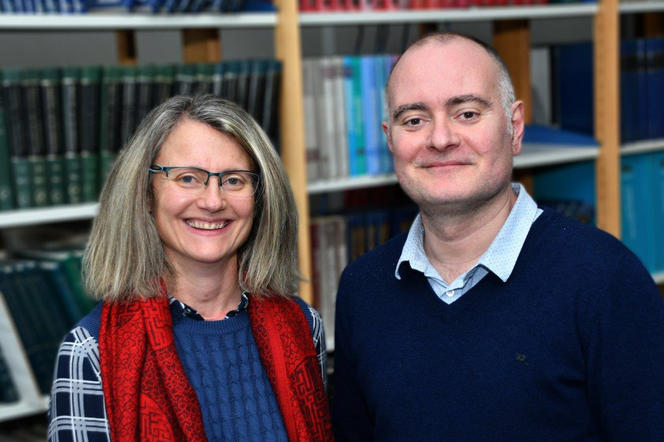 The promoters of the French candidacy, Isabelle Saves and Olivier Neyrolles at the Institute of Pharmacology and Structural Biology (IPBS). 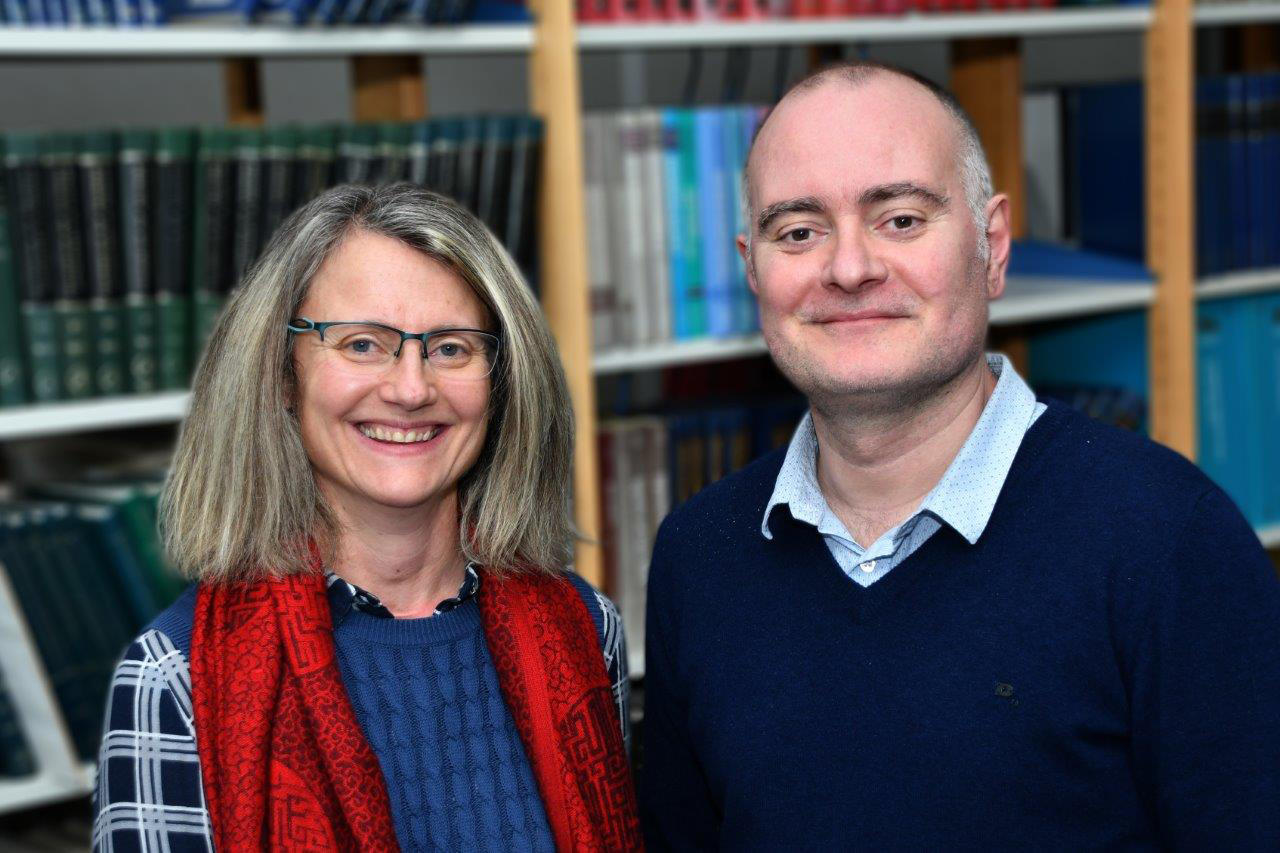 The promoters of the French candidacy, Isabelle Saves and Olivier Neyrolles at the Institute of Pharmacology and Structural Biology (IPBS).
IPBS
IPBS
Share
Share

What is the purpose of the forum?
I.S.: The forum offers a chance for an update on tuberculosis research in order to improve vaccination. During the Sixth edition, we aim to focus on French-speaking populations. We would like to invite local actors from francophone countries affected by the disease, such as personnel in healthcare centres (care staff, students, etc.), and wish to reinforce international cooperation, especially with southern countries, which are among the most severely-affected.
O.N.: The forum will provide a space for dialogue between more than 400 participants from around the world – scientists, clinicians, patient associations, foundations, sponsors and industry. Its three days will be a unique opportunity to review the situation of research on tuberculosis vaccines. What works? What are the target populations? How can we do better? The event will be built around scientific presentations and round-table debates involving representatives from industry and partners from scientific consortia: plenty of time will be allowed for discussions between the different players. Awareness will also be raised among political decision-makers and industrial partners, who will be encouraged to join the fight against tuberculosis, a global public health challenge.
I.S.: This international forum coincides with the European Vaccination Week and will immediately precede the European Immunization Week. We will therefore take advantage of its visibility to stress the importance of vaccination by organising in parallel a series of events aimed at the general public. This is a major public health issue, in a context of distrust of vaccines. For this reason, we will for example arrange debates between members of the public and experts in the field. People should know that tuberculosis and other infectious diseases are a real threat to humanity, resulting in millions of deaths each year, and that vaccination is the only way of eradicating them.

Article
A century after BCG, a global forum tackles tuberculosis