Home / Articles / The Beneficial Effect of Migration on the Economy

The Beneficial Effect of Migration on the Economy

Home / Articles / The Beneficial Effect of Migration on the Economy

The Beneficial Effect of Migration on the Economy

Syrian refugee employed at the distribution center of a large supermarket chain in Zaandam (Netherlands), in 2016.
ILVY NJIOKIKTJIEN/The New York Times-REDUX-REA
Share
Share
A new macroeconomic study covering the last 30 years in Europe reveals that migration flows have had a positive effect on the economy. Furthermore, the flow of asylum seekers, which has never previously been studied on such a scale, does not appear to have any detrimental effect on the public finances of host countries. We take a closer look with one of the study authors, the economist Hippolyte d’Albis.

You have just published in Science Advances a macroeconomic study1 on the effect of migration flows on the European economy. On what data is your analysis based?
Hippolyte d'Albis:2 The data are taken from Eurostat and the OECD databases and cover the period between 1985 and 2015. We have examined all the countries in Western Europe3—including France of course—but we have left out certain countries such as Greece, due to the lack of available tax data prior to 1990. The countries covered are the main host countries of asylum seekers (89% in 2015). In terms of migrant flow, we distinguish between the inflow of permanent migrants, i.e. the difference between the number of immigrants and the number of emigrants, also referred to as net migration, and the flow of asylum seekers. Asylum seekers are granted a temporary stay while their asylum application is examined and they are thus not included in the former category of permanent migrants. During the studied period, we saw a marked increase in the flow of asylum seekers following warfare in the Balkans between 1991 and 1999 and again as of 2011 in the wake of the Arab Spring. An increased flow of permanent migrants can also be seen following the extension of the EU in 2004 to include Eastern European countries. 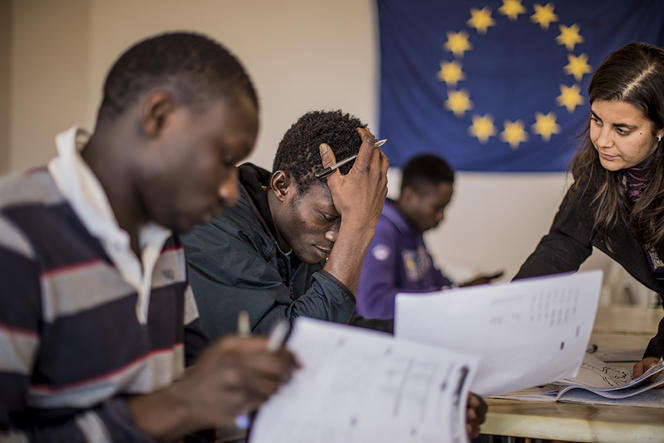 Italian language classes at the Tor Sapienza refugee center, in the suburbs of Rome. Due to its peninsular position in the center of the Mediterranean, Italy has in recent years been experiencing a massive influx of migrants, particularly from Africa. Yet according to the study, the highest number of asylum applications over the last thirty years have been in countries of Northern Europe. 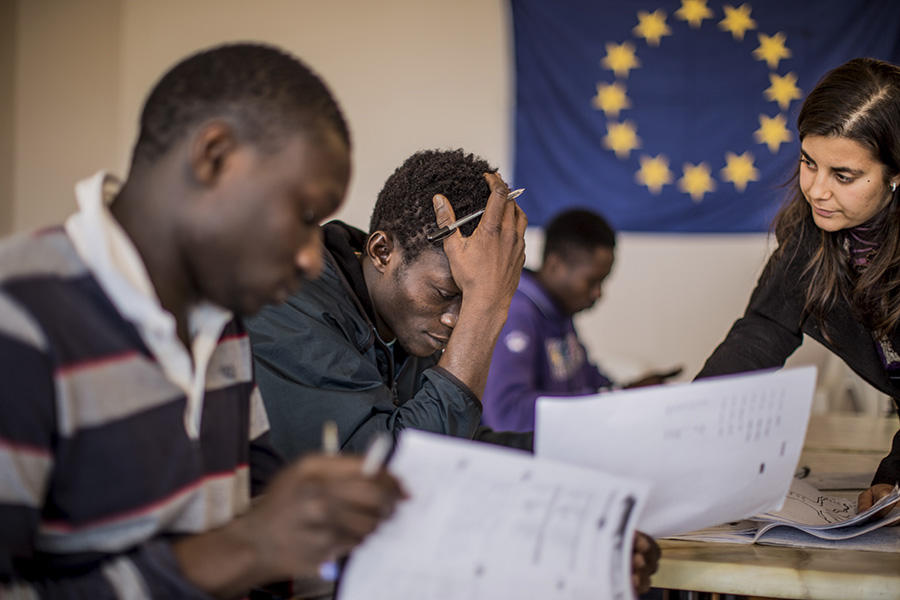 Italian language classes at the Tor Sapienza refugee center, in the suburbs of Rome. Due to its peninsular position in the center of the Mediterranean, Italy has in recent years been experiencing a massive influx of migrants, particularly from Africa. Yet according to the study, the highest number of asylum applications over the last thirty years have been in countries of Northern Europe.
Lorenzo MOSCIA/ARCHIVOLATINO-REA
Lorenzo MOSCIA/ARCHIVOLATINO-REA
Share
Share

What are the most obvious economic effects seen for these two types of flow: permanent migrants and asylum seekers?
H. A.: There is a highly noticeable positive effect for the flow of permanent migrants. Following an increase in this number at any given date, per capita GDP increases significantly over the ensuing four years while unemployment levels decrease. And this is the exact opposite of what we are generally told. This improvement in the economic situation also has a positive effect on public finance: as public spending increases, so too does revenue in terms of tax and contributions. Regarding the flow of asylum seekers, we did not anticipate any marked effect since this is a highly particular form of immigration. Most European countries offer to take in asylum seekers while their asylum applications are being examined, but the latter are not authorized to work during this period. Consequently, the anticipated economic contribution of asylum seekers is inferior to that of permanent migrants, for whom there are no such employment restrictions.

Following an increase in permanent migrants at any given date, per capita GDP increases significantly over the ensuing four years while unemployment levels decrease.

We are occasionally told that granting asylum seekers entry brings significant costs for host countries, but over the period in our study, i.e. 1985 to 2015, we found no statistical evidence suggesting worsening of economic conditions in Western European countries, whether in terms of standard of living, unemployment or public finance. After several years, there may be a slight positive effect as asylum seekers granted permanent residence take up employment and contribute actively to the economy of their host country.

What type of methodology did you use?
H. A.: Ours is commonly used in macroeconomics to assess the effects of increased public spending. This approach is known in economic jargon as the Keynesian multiplier, which determines the effect on GDP of increased public spending. The originality of our article lies in using this method to analyze the effects of increased migration flow on macroeconomic aggregates and on public finance, an approach that has never previously been undertaken. We used a statistics model that imposes very few theoretical hypotheses thus enabling the data to speak for itself. To validate our model, we replicated the results for increased public spending used in macroeconomic reference models. Following validation of our model, our work consisted in assessing the economic and budgetary effects of migratory inflows. 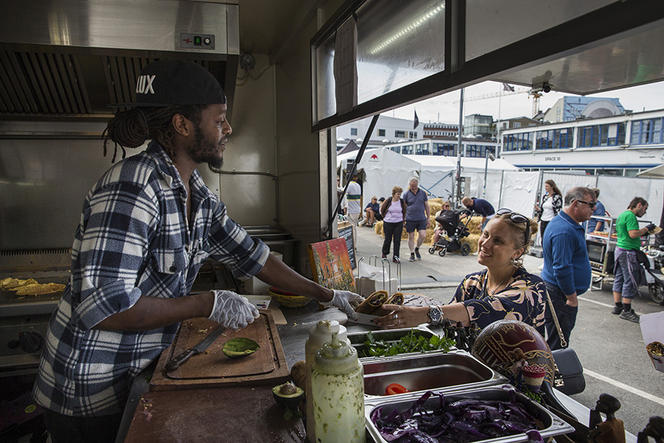 Sylvester Bbaale, originally from Uganda, arrived in Denmark in 1989 as a baby. He now operates a food truck in Copenhagen, Denmark (2016). 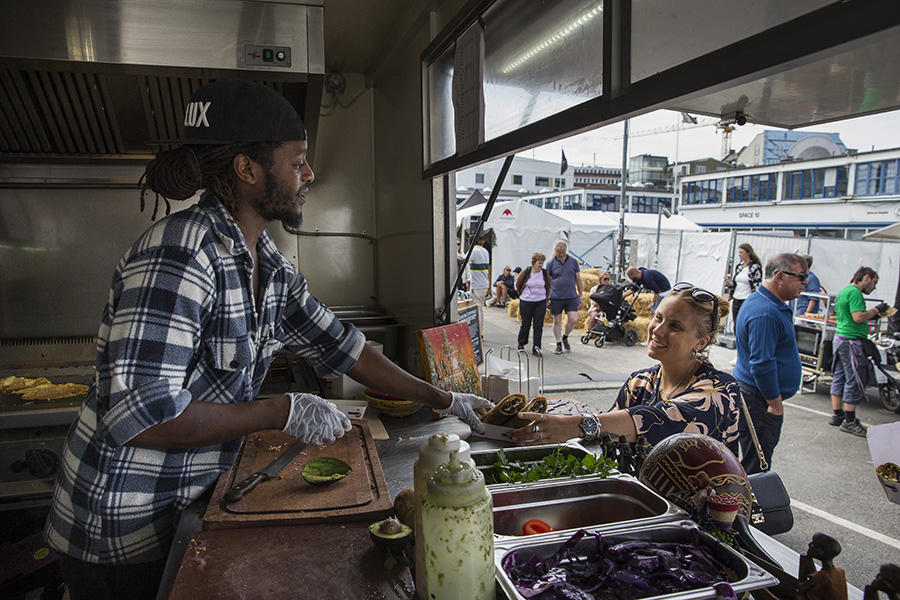 How does this method differ from other economic studies already performed in this area?
H. A.: The chief methodological difficulty when dealing with the economics of migration has to do with identifying causality. If you draw a simple correlation between economic and migratory variables, you will very often find a positive correlation: more migrants are found in places of greater wealth. However, this can mean one of two things: either the host country is made wealthier due to the influx of migrants, or more migrants go to countries that are wealthier in the first place. Consequently, analyzing such correlations is not particularly informative, and we must therefore turn to advanced statistical methods to assess the effects of migration flow on macroeconomic variables.

"We sometimes hear that granting asylum seekers entry brings significant costs for host countries, but over the period studied, we found no statistical evidence suggesting this."

Purely accounting-based approaches may also be used in which we simply compare the difference between the taxes paid by migrants and the services they receive from the public authorities. But this approach overlooks the interactions that may exist between variables and economic actors. Furthermore, such approaches are highly dependent on the quality of the surveys on which they are based. Our approach allows the data to speak themselves to a far greater extent and takes into account the interactions between different variables. This is a recognized approach used in macroeconomics to identify the causal effect of a given budgetary policy, for example. In our article, we used this approach to show that the causal effect of migration flow in Europe tends to be positive.

Do the Schengen Area in Europe and the conventions governing right of asylum not complicate this type of analysis, since certain countries, because of their geographical position, are forced to deal with higher numbers of applications?
H. A.: Our methodology allows for the fact that certain European countries receive more asylum applications than others. In concrete terms, the data we have used includes the number of foreigners whose asylum applications are currently under consideration at the end of each year for the country in question. The data on asylum seeker flow used in the study does not include details on how they arrived, for instance, if they entered Europe after crossing the Mediterranean. Data on the flow of asylum seekers indicates that the countries receiving the greatest number of asylum applications on average over the period 1985-2015 are Germany, France, the UK, Sweden and the Netherlands. Countries forming the external borders of the Schengen Area (Italy, Spain and Greece) in fact received relatively few asylum requests. In terms of the ratio of migration flow to population, the five countries receiving the largest proportion of asylum applications on average over the period 1985-2015 are Sweden, Austria, Norway, Belgium and Germany. In certain countries, it is essential to distinguish between the flow of persons from external nations arriving via the Mediterranean or other borders outside the Schengen Area and flow of asylum seekers. Asylum seekers are considered by European host countries as temporary legal immigrants (while their asylum applications are being examined). 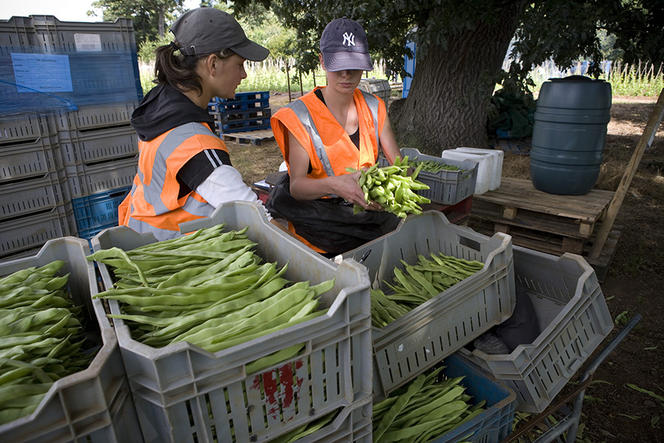 Agricultural workers from Eastern Europe, working on a bean plantation in Spain, in Warwickshire County, England. 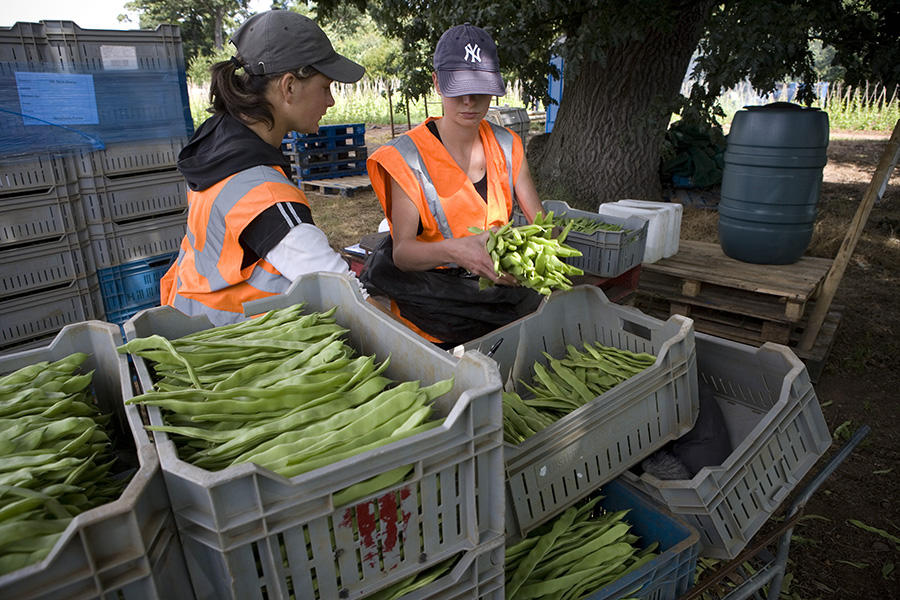 What data do we have on how this affects a single country, like France, for example? Although the study concerns Europe, it is in fact individual national economies that must deal with the flow of permanent migrants and asylum seekers.
H. A.: Our study concerns a panel of Western European countries and our findings are valid overall for these countries. But we are unfortunately unable to analyze the effects of migration flows on the public finances of a given country due to insufficient temporal data. However, my co-authors Ekrame Boubtane and Dramane Coulibaly and myself are looking at some data for France. On average, extra-European migration to the country concerns around 189,000 persons annually, half of whom migrate for family reunification and a quarter for studies. In a paper published in 2016, we previously identified positive effects of immigration on the macroeconomic situation in France.4 We use the same method to assess the effect on the French economy of the inflow of permanent migrants from other EU countries. Even if we consider only family migration, the effects are positive, contrary to popular opinion.

How do you account for this?
H. A.: There are several mechanisms at play.  A lot of immigrants that enter the country for family reunification are present in the home help and personal assistance sector, making it easier for ‘natives’ to work. Moreover, reuniting families reduces the amount of money sent back to their country of origin, thus increasing consumer spending in France.

What policy recommendations can be drawn from your studies?
H. A.: Regarding immigration, it would be somewhat naive to attempt to construct a recommendation using a diagnosis based solely on the economy. Our findings in fact suggest that the political debate concerning immigration focuses far too intently on the supposed economic cost of migrants. We show that the latter group, whether permanent migrants or asylum seekers, does not in fact have any negative economic impact. It is therefore essential to re-center the migration debate on the political and diplomatic dimensions. Similarly, it is not simply because there are economic benefits associated with migration flow in Europe that this phenomenon should necessarily be encouraged. It is essential to bear in mind that we are speaking about individuals. More generally, research on migration requires an interdisciplinary approach. This is in part what makes it so fascinating.

Opinion
Debunking the Tragedy of the Commons
Migration