adam121 /Stock.Adobe.com
Share
Share
Our conception of innovation has changed radically in recent decades, with an approach based on human well-being replacing the technocentric ideology of the 1990s, believes the economist Sébastien Lechevalier, who recently edited a book on the subject.

The book that you edited, Innovation Beyond Technology: Science for Society and Interdisciplinary Approaches, which was published last year by Springer, shows how recent decades were a "golden age" for technological innovation. Why was this the case?
Sébastien Lechevalier:1 From a statistical standpoint, multiple indicators point to an acceleration in this area since the 1990s. In particular, historians and economists have noticed a sharp increase in investment in scientific research and engineering, as in the number of researchers, PhD students, and publications. More resources are therefore available worldwide in both the public and private sectors. This is of course partly due to Chinese development in the field. This evolution is also visible in terms of effects, as demonstrated by the evolution of computing power in accordance with Moore's Law. Similar trends can be observed in the fields of medicine, biotechnology, and engineering.

These evolutions should nevertheless be put into perspective on the historical scale: for example, wasn’t the invention of the printing press more important than the Internet? While it is difficult to answer this question from a strictly statistical point of view, it is obvious, looking at the history of science and ideologies, that innovation became a fundamental value during the 1990s. The idea that it was an indispensable condition (essentially from a technological perspective) to develop, prosper, or quite simply survive became firmly rooted in both industry and governments. 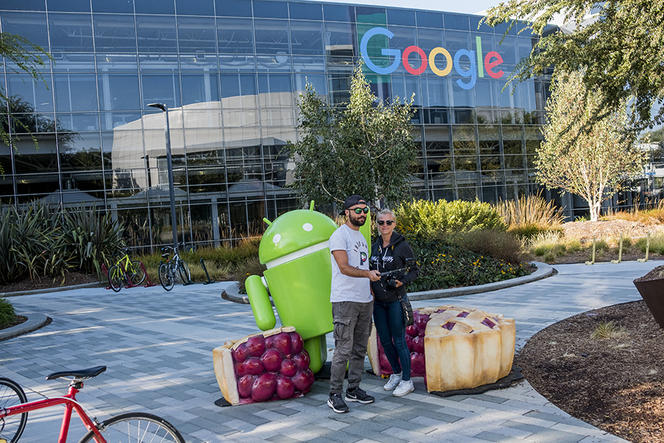 It was during the 1990s that innovation, primarily of the technological kind, became a fundamental value. One of the giants in the field, Google, receives visits from tourists, such as this couple posing for a selfie in front of the company's headquarters in Mountain View, California (US). 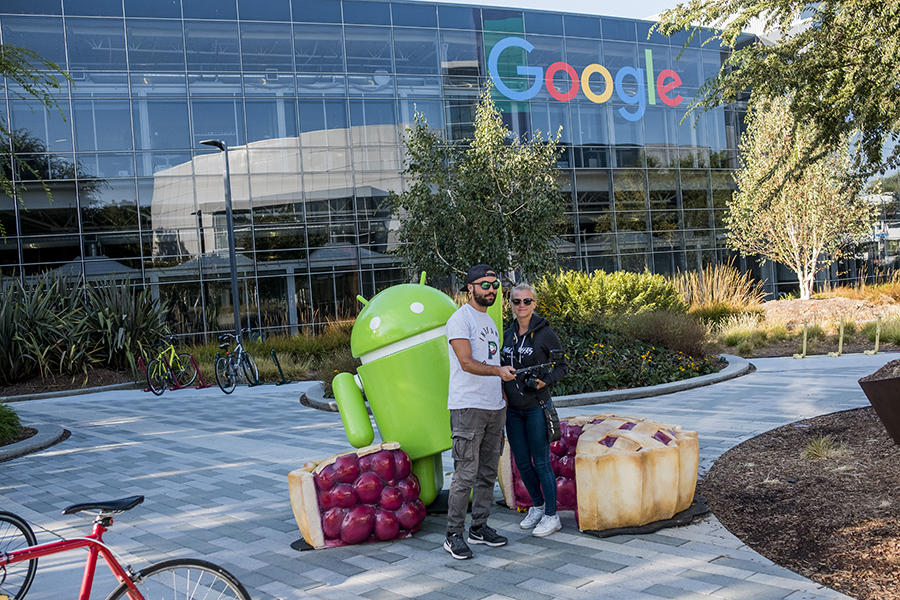 It was during the 1990s that innovation, primarily of the technological kind, became a fundamental value. One of the giants in the field, Google, receives visits from tourists, such as this couple posing for a selfie in front of the company's headquarters in Mountain View, California (US).
Moe Zoyari/REDUX-REA
Moe Zoyari/REDUX-REA
Share
Share

How did this ideology of innovation take root?
S. L.: Not being a historian, I believed like many others that the turning point occurred during and after the Second World War. Yet in our book, a number of authors show that the end of the Cold War had a greater impact. The failure of communism and regimes claiming to be communist was a blow to the notion of progress inherited from the Enlightenment. It was then that research by economists emerged as an alternative, drawing inspiration, from the 1970s onwards, from Joseph Schumpeter's work on creative destruction and innovation. These economists advocated that a company's or government's capacity to innovate is a driver for economic growth: the more a state invests in innovation and encourages citizens to engage in and develop new technologies, the more the economy will prosper.

The myth of the new economy was built upon this blueprint during the 1990s, which explains US technological domination (information and communication technologies, biotechnologies, Silicon Valley start-ups, etc.), and justifies it in return. The cultural influence of the US and the "American dream" played an important role in spreading this ideology throughout the world.

This also led to profound changes in the economic theories of growth that had heretofore promoted the accumulation of capital and labour, which inevitably came up against limitations. The emphasis on innovation enabled Neo-Schumpeterians to conceive of a knowledge economy, as well as to consider growth as unlimited.

Why was innovation seemingly called into question at the turn of the 2000s?
S. L.: This did not happen overnight, but various trends indeed converged during that decade. Economists challenged the Neo-Schumpeterian paradigm: growth tended to slow in rich countries, especially after the 2008-2009 crisis, even though the innovation policy continued to flourish. This prompted an entire series of often critical debates on the subject of "secular stagnation" — not to mention the fantasies and hype surrounding the technophilia of the 1990s, which led to disillusion.

In medicine for instance, there was a sharp contrast between the remarkable progress in gene therapy, the treatment of certain cancers or AIDS, and the way patients were managed, or how their pain was treated. Innovation did not necessarily mean improved living conditions or well-being, but sometimes quite the opposite, as demonstrated by the rise of controversies surrounding planned obsolescence, for instance. Numerous scandals linked to technology — the impact of pesticides on health and the environment, the undesirable effects of certain medicines, the conditions in which our electronic devices are produced in developing countries — have also fuelled growing doubt regarding the limitless benefits of technological innovation.

Finally, the Fukushima nuclear disaster was a shockwave. The Japanese nuclear industry had indeed been considered until then as one of the world's best, renowned for its safety. This event triggered a new wave of doubt in the scientific and engineering community, as well as in the collective imagination, and indirectly gave rise to the book Innovation Beyond Technology. 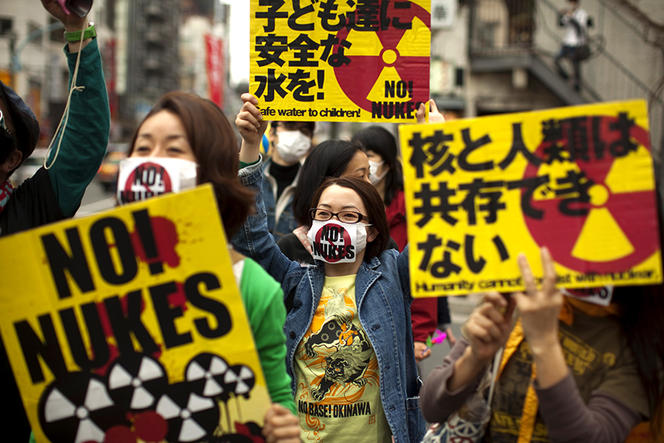 This anti-nuclear demonstration in Tokyo drew 15,000 people on 10 April 2011, one month after the Fukushima nuclear disaster. The Japanese nuclear industry had previously been considered one of the world's best and safest. 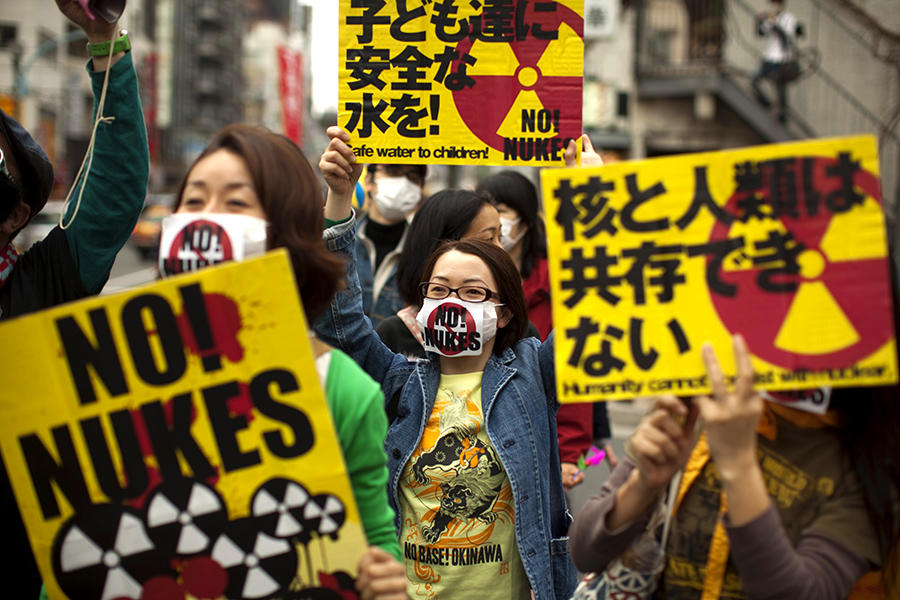 This anti-nuclear demonstration in Tokyo drew 15,000 people on 10 April 2011, one month after the Fukushima nuclear disaster. The Japanese nuclear industry had previously been considered one of the world's best and safest.
Adam DEAN/PANOS-REA
Adam DEAN/PANOS-REA
Share
Share

Has a new conception of innovation emerged, one that is in keeping with these critiques?
S. L.: In recent years, the concept that innovation does not simply amount to new technologies has gained momentum. From this point of view, innovating also involves imagining the uses, legal frameworks, and policies that can improve our living conditions. If we want to combat global warming, for example, we will of course have to invent means of transportation that are not as energy-hungry and generate less pollution. But we must also review traffic rules, work with experts in urban planning, take a different approach to the city and regional network, etc. For that matter, a deep-set tendency in innovation research today is to diverge from what is done in the US, Europe, Japan, or Korea.

In countries in the Global South, whose resources are obviously not the same, certain initiatives are remarkable. In Senegal for example, local entrepreneurs have set up a loan and secure payment system using a simple mobile telephone network: messages and codes enable farmers or young businesses to access services similar to those offered by online banks. In this instance, it was actually the conjunction of human needs, new uses, and of course technological tools that proved to be an innovation factor. This type of practice, analysed with concepts such as "grassroots innovation", "reverse innovation", and "innovation from the bottom of the pyramid", has inspired an economic sector that is more human-focused. 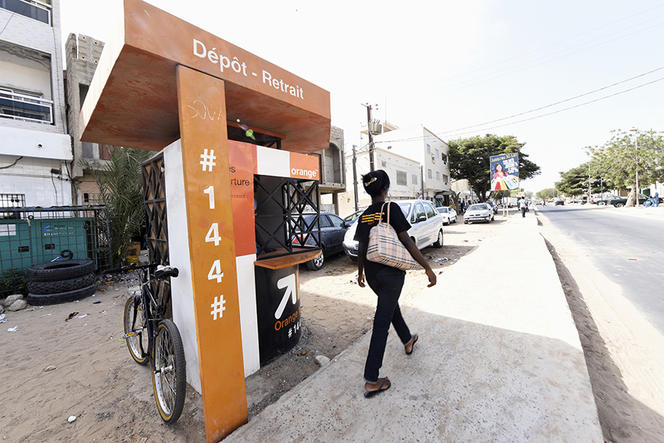 An "Orange Money" booth in a suburb of Dakar, Senegal (July 2015). Managed by the West African mobile service provider Sonatel, and partially owned by France Telecom, this infrastructure enables money transfers via telephone. 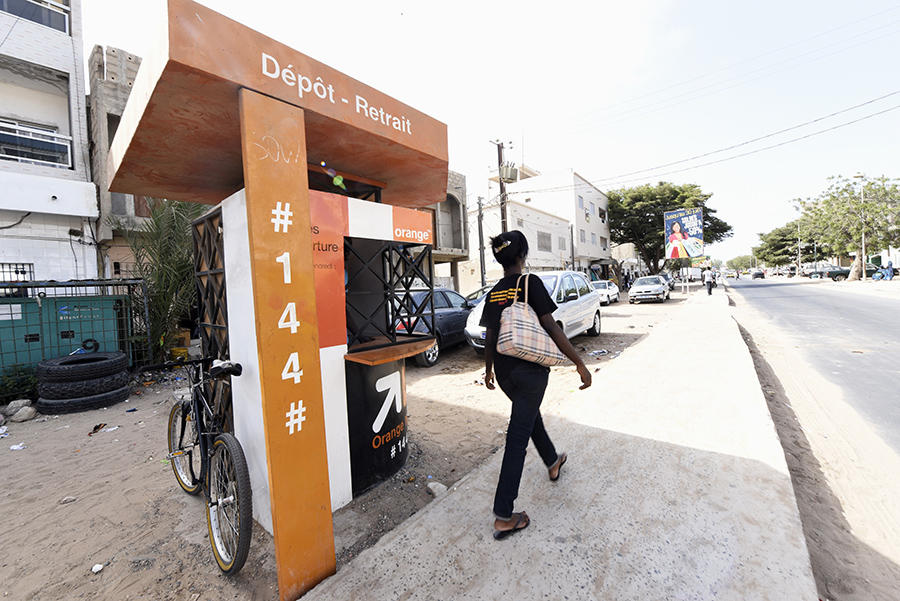 Did the interdisciplinary approach adopted in your book result in technological factors being put into perspective?
S. L.: Surely in part. Academic programmes in engineering or new technologies sometimes overlook human factors or uses. As an economist by training and a specialist in innovation and industry, I must admit I was shaken by the issues brought up by my colleagues in philosophy, epistemology, and history! They greatly helped in assessing the impact of Neo-Schumpeterian ideology, as well as in exploring the meaning of the word "progress". A legal expert also raised our awareness to the challenges of adopting new technologies in our societies.

Take the self-driving car for example: who is responsible in the event of an accident? The carmaker, computer scientist, or the passenger? This type of dilemma — which is also common in political philosophy — helped us realise that innovation also depends on the creation of adapted rules and frameworks. In the future, we would like to step up interdisciplinary collaboration, especially with our colleagues in engineering, who are sadly underrepresented in our book.

In view of this collective work, what recommendations would you make to promote progress in the broadest sense?
S. L.: First of all, I believe it is essential to widen the debate to include researchers and engineers, as well as politicians and civil society. This is not necessarily a new idea, as the Budapest Declaration called for the democratisation of scientific production some twenty years ago, although little progress has been achieved in this field. We must imagine new ways of involving citizens in order to combine technological innovation with a reflection on our real needs — social, ethical, environmental, etc. Also, it is indispensable to initiate dialogue between researchers and the rest of society, while preserving scientific investigation from short-term criteria that are overly utilitarian. This will require a more ambitious research policy.

Finally, I am convinced that the private sector has a major role to play. A company's success can no longer be measured solely in terms of increased profitability. Businesses must include in their objectives the well-being of consumers, as well as that of their employees and partners. Our book is intended for researchers as well as business leaders, to whom I will actually be presenting our main results in the near future. Generally speaking, this debate cannot be limited to a strictly scientific framework but should include all of society.

This book is the result of close collaboration between the Japan Science and Technology Agency, the CNRS, and the EHESS in connection with two conferences organised in Paris and Tokyo in 2015 and 2016: "Engaging Society in Innovation and Creativity: Perspectives from Social Sciences and Humanities" and "Innovation Beyond Technique."

Article
The Beneficial Effect of Migration on the Economy

Opinion
Debunking the Tragedy of the Commons
Innovation