Rally in Turin (Italy) on January 8, 2015, in memory of the victims of the "Charlie Hebdo" attack in Paris the previous day.
M. BERTORELLO/AFP
Share
Share
In modern Western societies, where individualism prevails, the outpouring of solidarity for victims of terrorist attacks may seem surprising. Sociologist Gérôme Truc sheds light on this paradox.

This interview was made before the recent attacks in Brussels on March 22.

In the first part of the book that you just published,1 you remind us that the attacks of September 11, 2001, mark a turning point in how the media covers and handles this type of dramatic event. How is that?
Gérôme Truc:2 It is the first terrorist attack in history that acquires the status of a live television ‘performance.’ Around the world, journalists had to comment images of the collapsing Twin Towers, which they were discovering at the same time as the audience, with little understanding of what was happening. This forced them to rely on pure speculation, especially on the number of victims, first estimated at more than 40,000 (the 9/11 attacks would eventually claim 2977 lives). At first, the media reacted in the same way as anyone else, from a purely emotional standpoint, though they quickly recovered and stepped back in their role. Yet this emotional reaction emerges every time a new Islamist attack occurs in the West, as testified by the way the attack on the Charlie Hebdo satirical magazine was soon referred to as “France’s 9/11.”

Yet, the way in which the media has covered these events since then—over the past 15 years—has evolved.
G.T.: True. When the US is attacked on 9/11, there are fewer 24-hour news channels in the television landscape. France's only two continuous channels (LCI and i-Télé) are the first to relay CNN’s live feed from New York. Today, they are everywhere, and influence the editorial line of mainstream cable channels like TF1 or France 2 (equivalent to CBS or NBC in the US), to chase ratings. 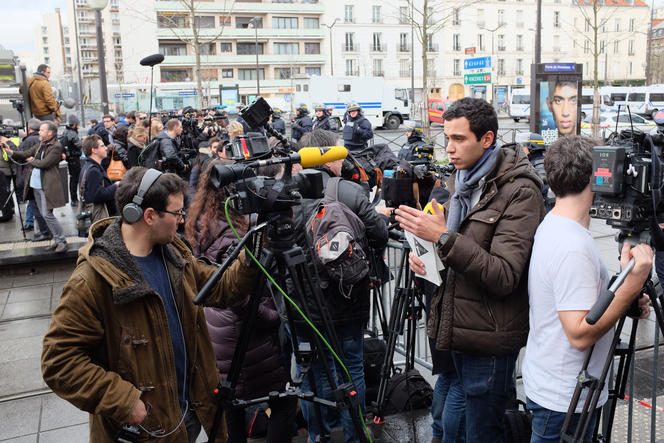 On Friday, January 9, 2015, a crowd of journalists is on location during the Porte de Vincennes siege and hostage-taking at the "Hypercacher" store in Paris. 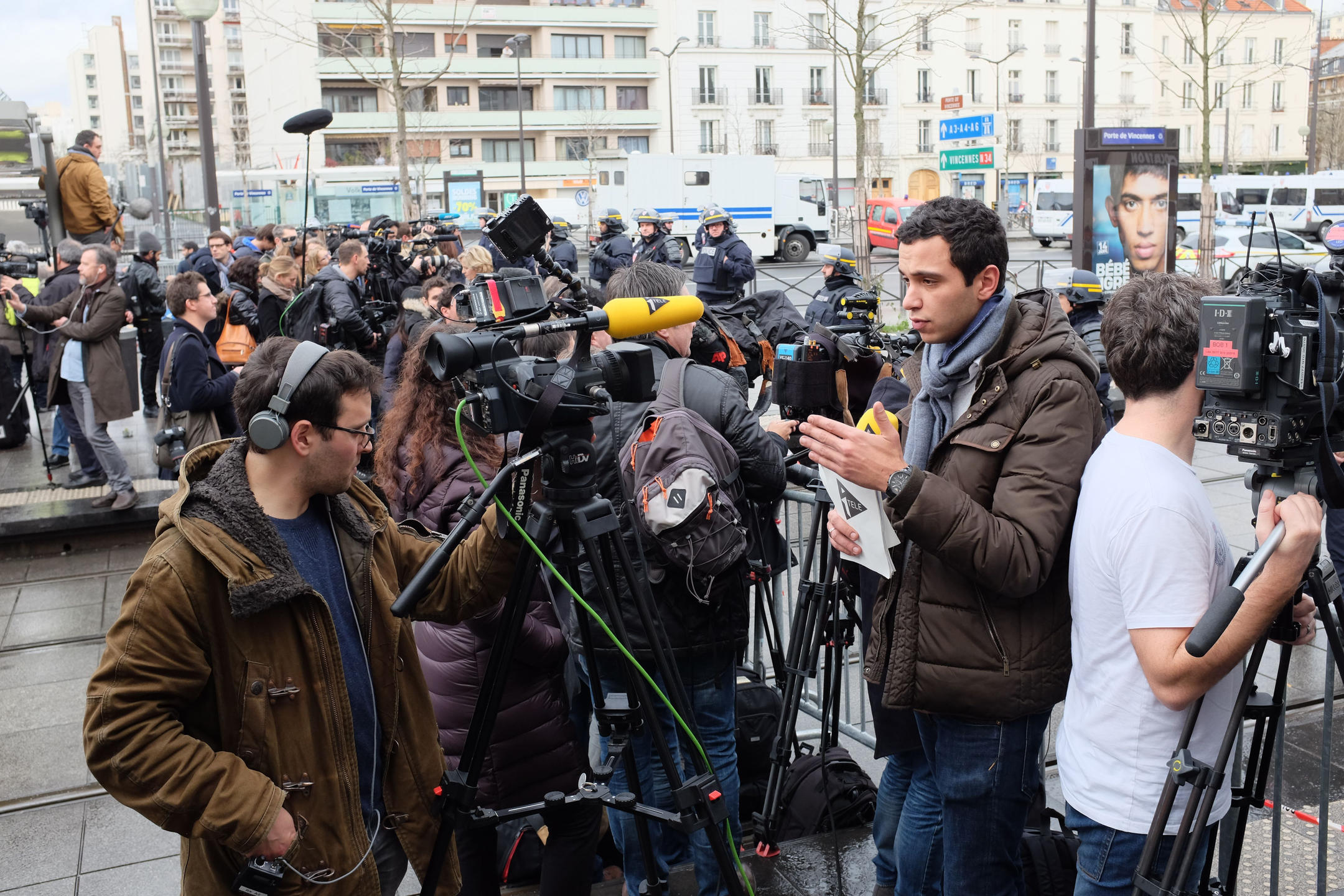 On Friday, January 9, 2015, a crowd of journalists is on location during the Porte de Vincennes siege and hostage-taking at the "Hypercacher" store in Paris.
F. TURSUN/SIPA
F. TURSUN/SIPA
Share
Share
We are no longer able to distinguish the effects of a terrorist attack from those of its media coverage.

On the evening of the Charlie Hebdo shooting (January 7th, 2015), French television viewers saw incredible images filmed by journalists that were embedded with the country’s special forces leading an operation in the city of Reims, in pursuit of the Kouachi brothers—the attack’s perpetrators. This operation was even announced on television during the 8:00pm national news broadcast, although it was supposed to remain secret. The images and opinions put forth by TV channels, but also the social media they were constantly plugged into, became inseparable from the event itself. So much so that it is impossible to distinguish the effects of a terrorist attack from those of its media coverage. What a society reacts to is first and foremost what it is able to perceive via the media.

Did the impulse and the means of expression of our solidarity toward the victims of terrorism also change over the past few years?
G.T.: Sociologists have known this for a long time: every society that is attacked needs to reaffirm its cohesion around federating symbols and slogans. This phenomenon can be observed well before the appearance of online social networks, and even on an international scale. After the collapse of the World Trade Center, the then editor3 of France’s Le Monde newspaper sets the tone with his editorial entitled “We are all Americans.” In March 2004, after the terrorist attacks on the Atocha train station in Madrid, the watchword is "Todos íbamos en ese tren" (We were all on this train) and "Todos somos madrileños" (We are all from Madrid). In London, in July 2005, the slogan “We are not afraid” crystalized the reaction. All of this predates the "Je suis Charlie" (I am Charlie) movement. Since the advent of online social networks, the mobilization around a single rallying cry seems to be much faster—it only takes a few hours—and the mass media, which until then played the role of “solidarity entrepreneurs,” as they did during 9/11, no longer have the initiative. When France’s Libération newspaper put on its cover "Nous sommes tous Charlie" (we are all Charlie) on the morning of January 8th, it was already too late, the first person singular "Je suis Charlie" had already won. 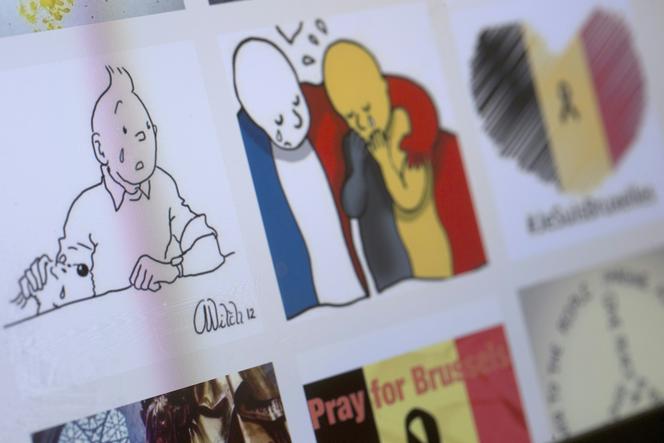 After the recent attacks in Brussels on March 22, 2016, the drawings by French artist Plantu and Tintin in tears were shared massively on social networks. 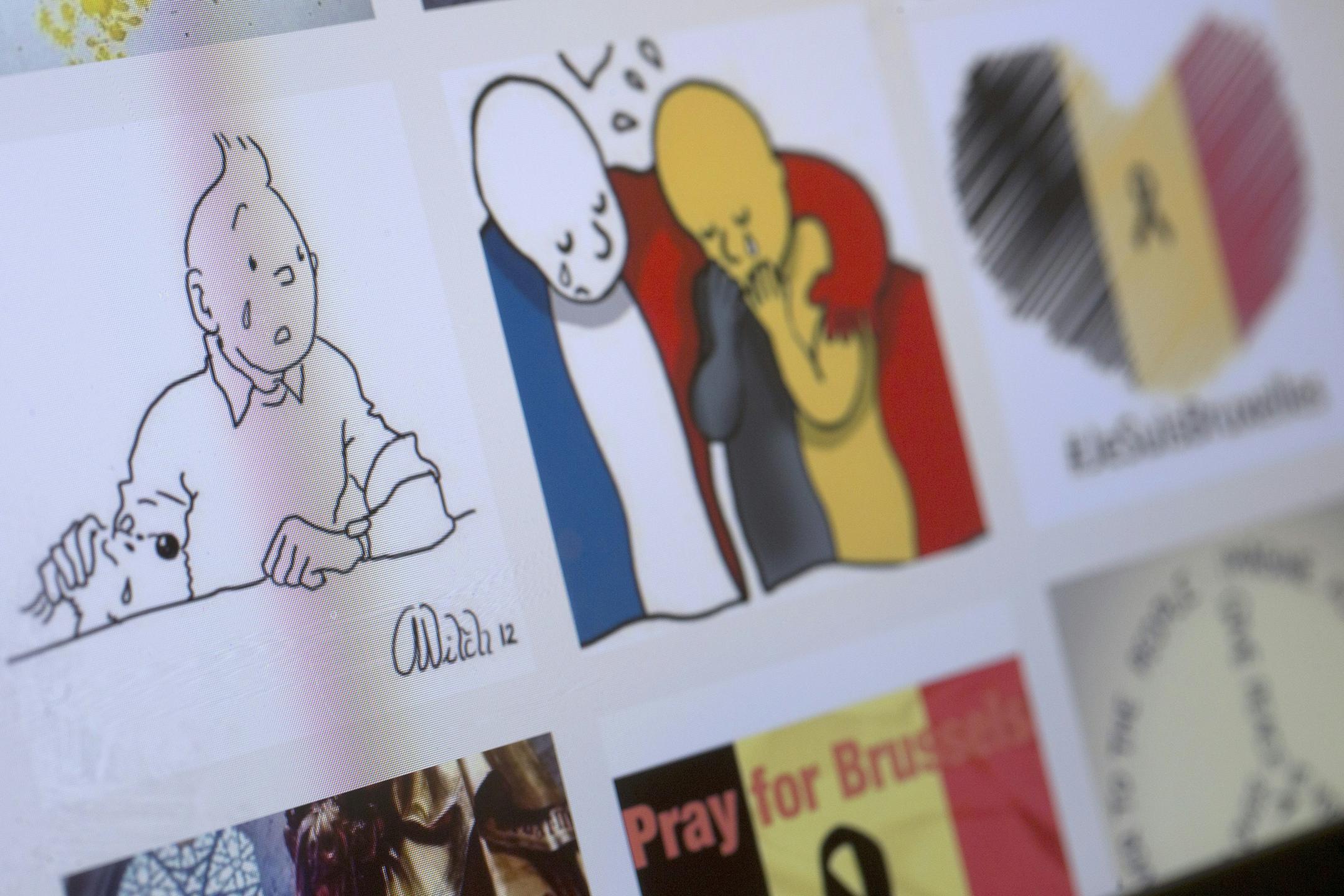 After the recent attacks in Brussels on March 22, 2016, the drawings by French artist Plantu and Tintin in tears were shared massively on social networks.
J. SAGET/AFP
J. SAGET/AFP
Share
Share

Indeed, how can we explain this change in messages of solidarity from a collective “we” (first person plural) to the “I am” form in January 2015? Does solidarity become more individualistic when expressed via online social networks?
G.T.: It is indeed tempting to interpret it as a sign of individualism, exacerbated by these same online networks. Yet it is more complex than that. Among the 5000 letters received by the Caen memorial peace museum in France (dedicated to the history of the 20th century) the month after 9/11, around a third of these messages of solidarity were already formulated in a personal style. And in March 2004, in the giant protests held across Spain following the Madrid bombings, numerous signs and T-shirts read “I am from Madrid.” This type of reaction, in the first-person form, therefore shows a need, or a will, to mark one’s individual engagement in a movement of collective solidarity. This cannot be reduced to simple narcissism inherent to online social networks.

Every society that is attacked needs to reaffirm its cohesion around federating symbols and slogans.

How should we interpret the messages that oppose generalized indignation, such as "Je ne suis pas Charlie" (I am not Charlie) in France?
G.T.: This type of reaction is not disconcerting in a society like ours, where there is social differentiation. Emile Durkheim, one of the founders of sociology, already observed that there was a risk that social links could crumble in 19th-century European societies. During his time, terror attacks were committed by anarchists who already stressed this weakness in order to bring down the republican order. In a way, there is a parallel between then and now. All the debates around slogans of solidarity and their individual reclaiming are part of the same thing: the fact that cohesion in our societies no longer holds a "mechanical" character, in the words of Durkheim. Although we are still captured by collective movements and reactions, each person lives them in their own way. And some people become more involved than others. 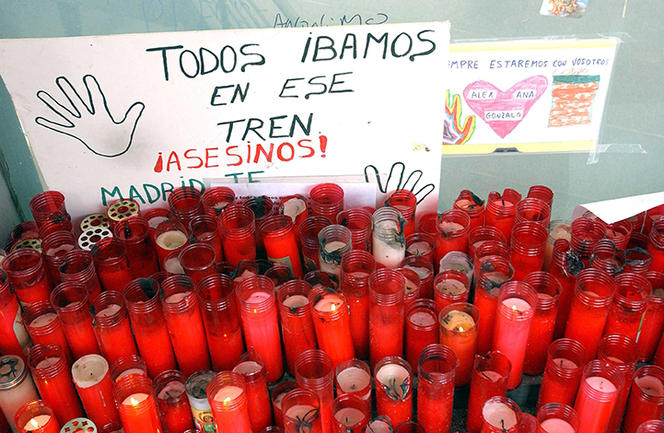 "We were all on that train. Assassins!" At the Atocha station in Madrid, messages of support and outrage could be read among the hundreds of candles laid in memory of the victims of the bombings that took place on March 11, 2004. 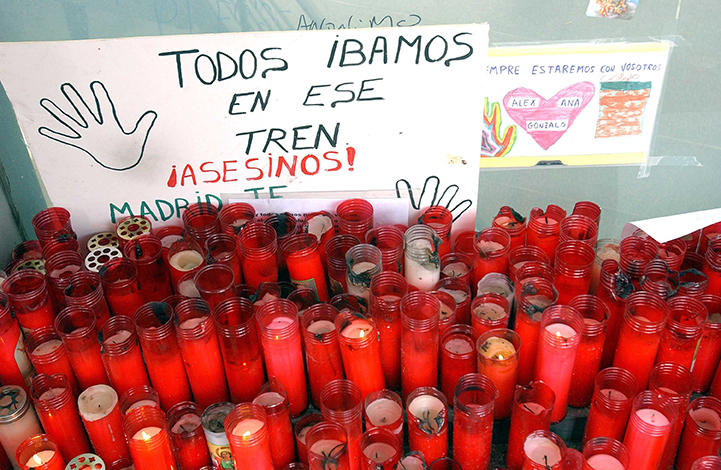 "We were all on that train. Assassins!" At the Atocha station in Madrid, messages of support and outrage could be read among the hundreds of candles laid in memory of the victims of the bombings that took place on March 11, 2004.
HADJ/SIPA
HADJ/SIPA
Share
Share

If these dissonant reactions aren't exceptional, they still become quite problematic for the public authorities.
G.T.: Indeed, political leaders fear this type of reaction. Because firing an AK47 on French people sitting at a cafe is not only aimed at setting a climate of terror. The objective is also to create divisions within populations by highlighting pre-existing ‘cleavages.’ Some will feel more solidarity with victims than others, some will be more concerned than others: and that is the danger. To avoid this risk of division, western leaders, whatever their political affiliation, systematically call for national unity, presenting Islamist attacks as attacks on “us” all, since they target “our” values and “our” way of life.

Why, as we observed in Paris last November, did so many people finally feel the need to express their solidarity to victims that they did not personally know?
G.T.: This is precisely because this wave of solidarity does not boil down to triggering national feelings of belonging. There are many social links that make us feel more or less close to this event and the victims. What also matters is that these victims appear as individuals, with faces and names. If we were only told the number of victims, our reaction would be very different. Online social networks certainly play a role at both of these levels. Yet we still have to analyze it in detail, which means understanding whether these networks change—or not—something in how we react to terrorist attacks. This is one of the major challenges of sociological research in relation with the January and November 2015 attacks in Paris.

Article
Alain Fuchs: “Our most potent weapons: intelligence and...