Found between 0 and 50 meters in depth, Pocillopora meandrina will be one of three coral species analyzed on all sites visited by Tara.
L. THIAULT/TARA EXPEDITIONS
Share
Share
The research vessel Tara sets off to the Pacific on a two-year mission to study coral reefs and assess the unprecedented threats from climate change on this fragile ecosystem, home to 30% of our oceans' biodiversity.

Tara could indeed be the proud descendent of the HMS Beagle. Since it was purchased 13 years ago by the founder of French fashion house agnès b. and turned into a sleek research vessel, the 36-meter long schooner—originally built to be trapped in Arctic ice—has scoured the oceans far and wide. It has already completed 10 missions, 320,000 km, each time capturing a new facet of the waters that make up 70% of the surface of our globe.  Fresh off another long expedition (Tara Oceans 2009-2013) which carried out the most complete inventory of plankton to date—and whose results have only just started coming in1—Tara is ready for its next adventure. On May 28th, it will depart on a 100,000 km journey across the Pacific Ocean to survey a more familiar—yet threatened—inhabitant of our seas: coral.

“Unlike plankton, coral is something that everyone can visualize,” enthuses Serge Planes, CNRS researcher at the CRIOBE2 and scientific director of Tara Pacific3 with co-director Denis Allemand, from the CSM.4 And he is right, as brightly colored coral reefs in exotic locations immediately come to mind. Yet these vivid colors are not from the coral itself, but from microalgae, single-celled organisms called zooxanthellae that live symbiotically in the animal’s tissue. “Coral polyps are by definition transparent, and mostly consist of a stomach with a mouth that extends out of its skeleton. They eat food particles and zooplankton in proximity, and produce the calcium carbonate necessary to extend their skeleton, which, put together, make up the reefs we know,” Planes explains. “Yet these polyps get most of their energy from zooxanthellae, which live in their tissue and use photosynthesis to produce the oxygen, sugars, and fat that feed them. In turn, corals provide the algae with CO2 and other nitrogen wastes and also help protect them. A true symbiotic relationship,” adds Planes. 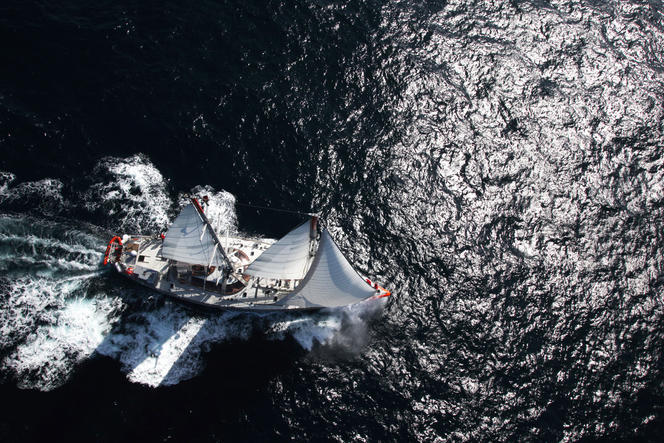 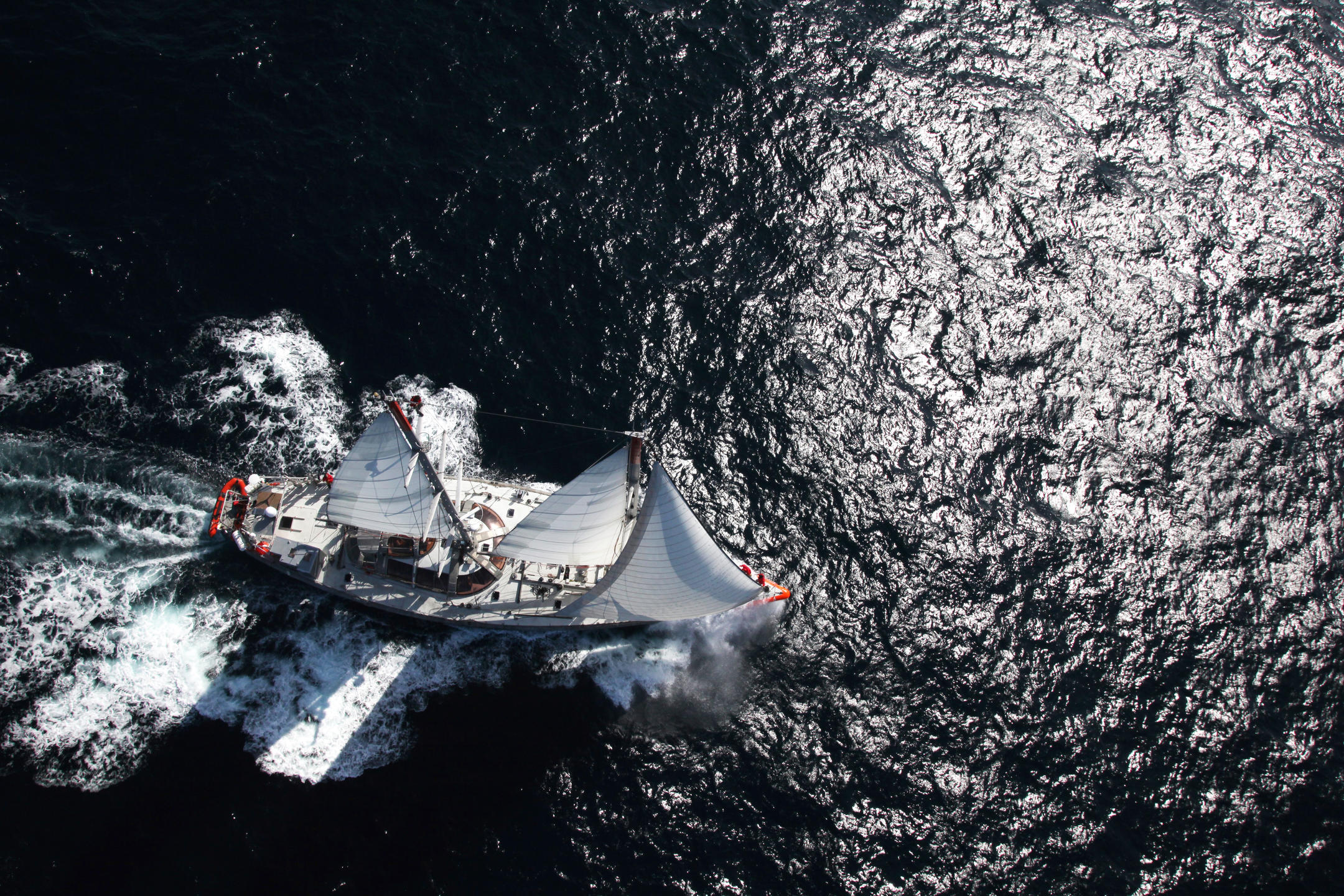 Although amounting to a mere 0.2% of the ocean floor, coral represents 30% of all oceanic biodiversity. Possibly a quarter of all marine species live in its reefs, which also barriers that protect shorelines from oceanic waves and erosion. And there are key hot spots, such as the so-called "coral triangle," which roughly surrounds Indonesia, Malaysia and the Philippines, and is home to almost half of all coral species. In terms of goods and services to world economies—from fisheries to tourism and coastal protection—coral reefs are estimated to be worth a whopping $30 billion a year.5 “Five hundred million people depend on these reefs for their livelihood—that’s 8% of the world’s population,” adds Planes, well aware that in human nutrition alone, 70% of all protein eaten in the Pacific comes in one way or another from these reefs. And if that were not enough, biologists know that part of the marine organisms living in these reefs—some still unknown—may hold key properties for the pharmaceutical drugs of tomorrow. Yet as he continues, the picture soon begins to fade.

Bleached out or acid washed

In addition to local threats to the reefs, such as coastal development, invasive species or overfishing (not to mention blast fishing using explosives in the Indo-Pacific region), the long-term dangers caused by pollution and global warming are still poorly understood. One is acidification. As oceans absorb excess atmospheric CO2, water pH level drops, making it harder for coral skeletons to calcify. Yet the most important threat is bleaching. On average, coral reef strive in balmy 25-28°C°C waters. When temperatures exceed the long-term summer maximum by 0.5 to 1°C for long periods of time (weeks or months), “the coral undergoes stress that leads it to force out the algae, which kills it in the long run,” Planes explains. What are left are these desolate "bleached" white coral reefs, which will eventually die. About 60 such events have been recorded so far, but two have had dire worldwide consequences, in 2010 and during the 1997-98 El Niño phenomenon, which saw temperatures soar in the Pacific Ocean. “Over 6 months in 1998, 18% of the world's coral reefs died. To make a comparison, the Amazon rainforest also lost 18% of is surface—but it took 40 years,” the scientist adds. “Considering that another El Niño event is currently under way, we’re worried about what we’re going to find in terms of bleaching—and death.” It is now estimated that 20% of all reefs have already been destroyed, 15% could follow the same fate within the next 10 years, and 20% are at threat of disappearing in 40 years. 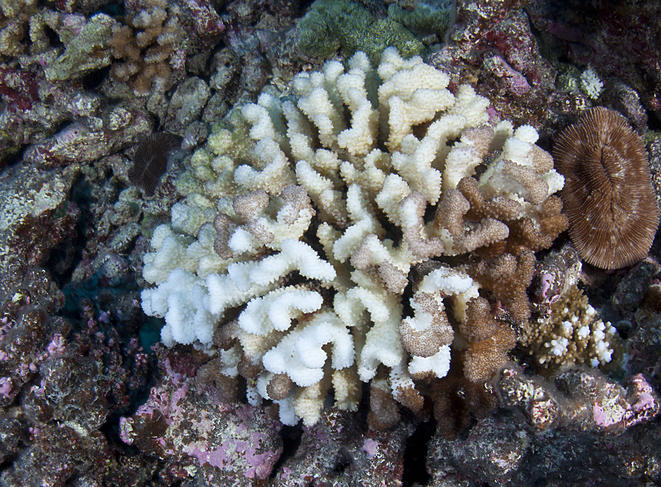 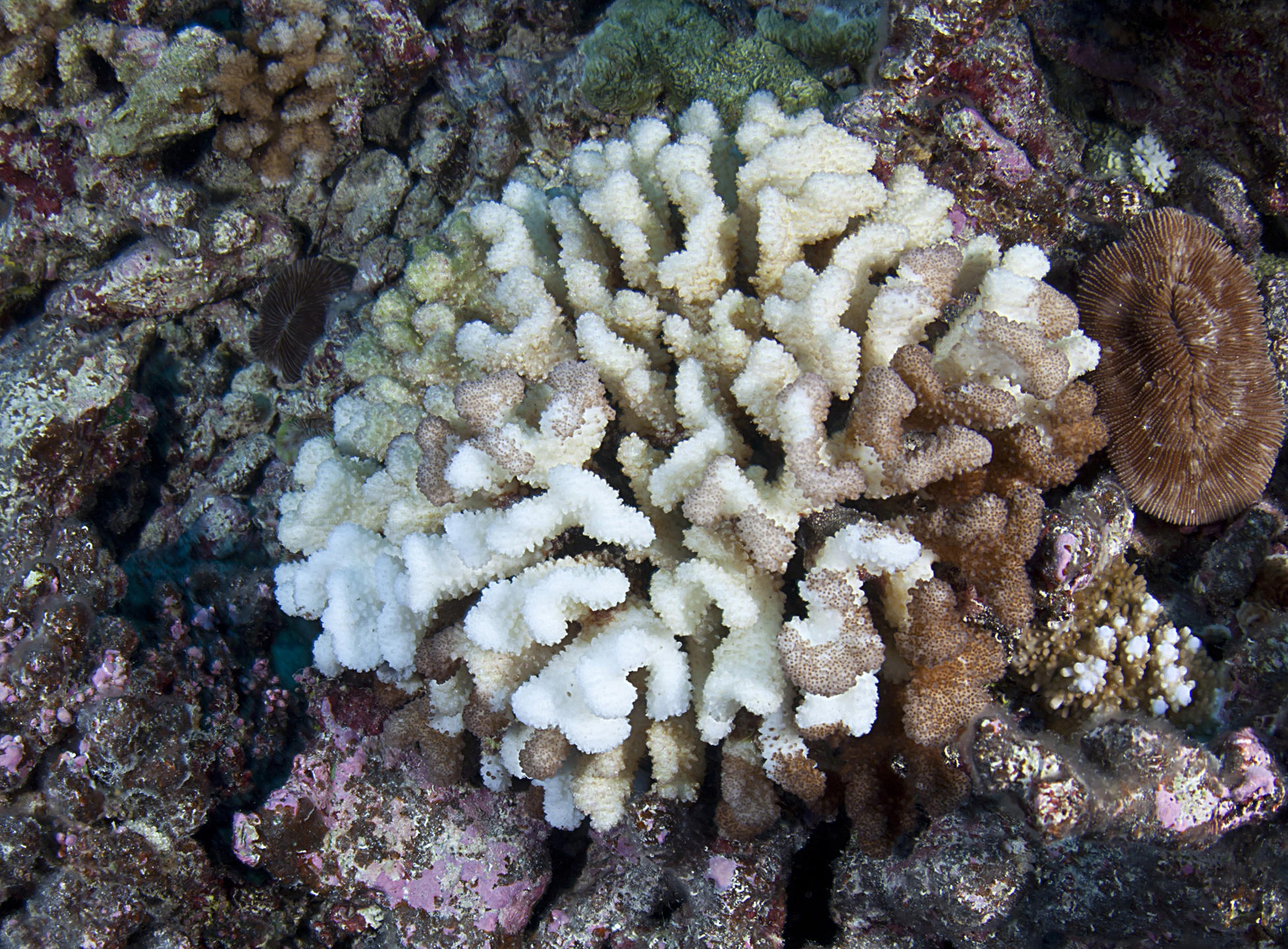 To provide an accurate picture of the overall health of these reefs and their biodiversity, as well as measure the resilience of coral to local and global threats, 70 scientists handpicked for this mission will take 15 to 45-day shifts on the vessel, which underwent a significant overhaul for the occasion. And not just in terms of laboratory equipment or by the creation of scuba diving-ready areas onboard. Tara was fitted with new engines and special cooling stations, “which will prove essential for the scientific instruments and 12 people onboard,” explains Romain Troublé, who has headed Tara expeditions since 2003 and is now CEO of the newly-formed Tara Expeditions foundation.6 “You have to bear in mind that this ship was originally built to be stuck in Arctic ice, not to sail the Caribbean. It’s going get hot in there,” continues this biologist by training, whose love for the high seas has turned him into Tara’s embodiment on land. “We’ll study 10 sites based on local environmental factors, but 40 atolls will be analyzed in the same way to be able to make accurate comparisons,” he adds. And the expedition will be split into two 8-month journeys.

“The two transepts that we have chosen to travel across were based on their gradient of biodiversity,” adds Tara Pacific’s scientific co-director Denis Allemand. “Coral is a very complex and fragile ecosystem. Our common ancestor dates back 600 million years, when it branched out from the group that represents all other animals. Its genome is as complex as that of vertebrates,” he explains, reminding us that this will be the first integrated and interdisciplinary study taking in the surrounding biodiversity—the coral holobiont—and its evolution over time. Some 40,000 samples will be collected and scrutinized using a variety of methods—such as microbiological and metagenomic analyses— to shed light on the chemical and genetic properties of the populations. This includes data on the water, microorganisms (bacteria and viruses), fish, but also three specific species of corals (Porites lobata, Pocilopora meandrina, and Millepora platyphylla), found between 0 and 50 meters in depth, and present on the sites visited by Tara. 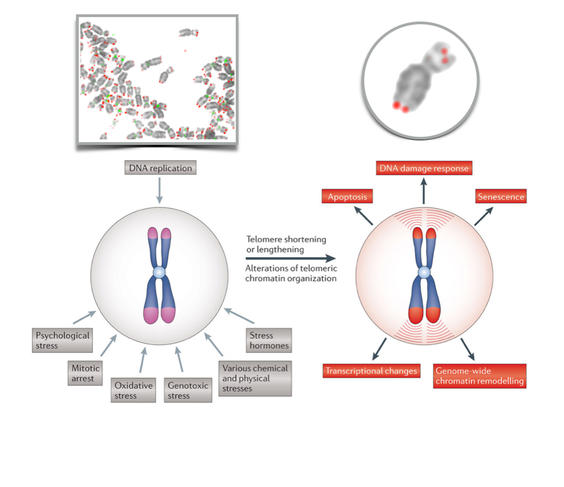 Telomeres shield the extremities of our chromosomal DNA from damages and instability. Studying them in coral will shed light on environmental stress. 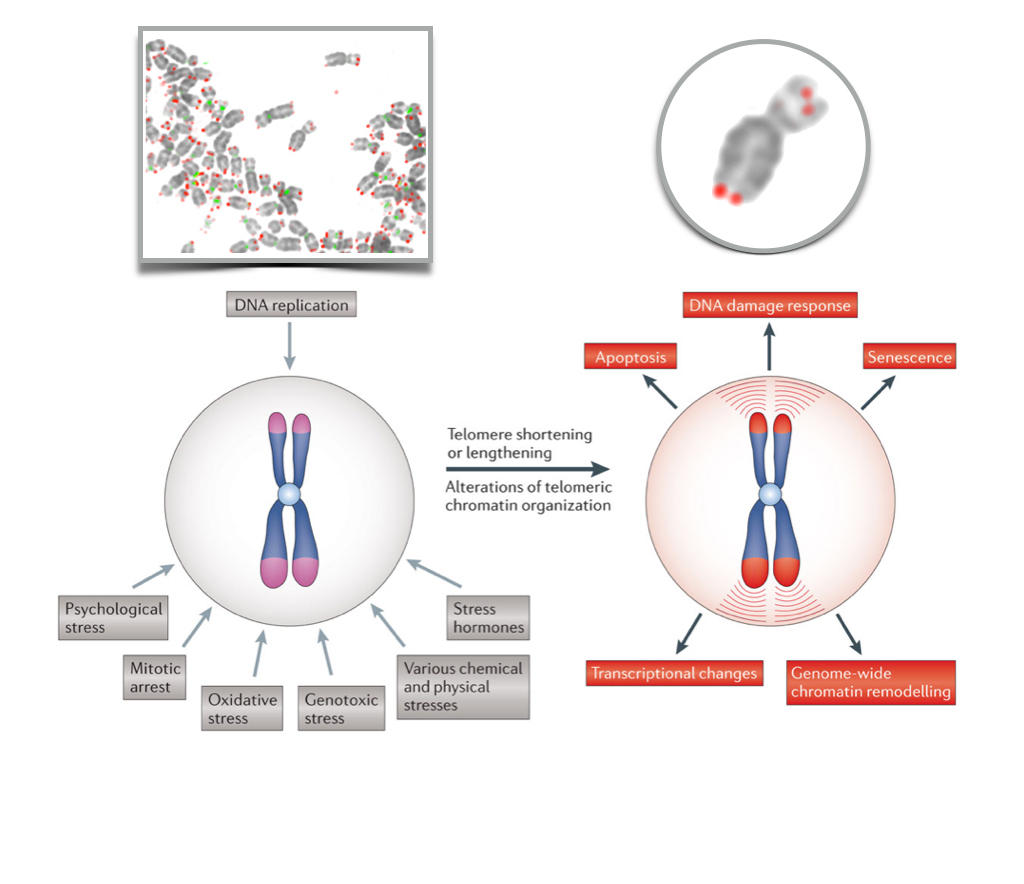 “Genomic analysis has allowed us to recently discover new bacteria, mushrooms, protists, viruses, so we are likely to find a lot more in those reefs,” Allemand continues. For the first time, a new biomarker will be analyzed to monitor environmental stress: the chromosome extremities, or telomeres. These telomeres shield the extremities of our chromosomal DNA from damages and instability. The rate of how they vanish during life is accelerated by environmental stress. The researchers will also drill tiny cores into the coral, which should reveal how its growth has evolved over a 40-100 year period  and determine the evolution of the surrounding seawater’s pH and temperature, as well as a host of other parameters. “Coral acts as a thermometer for our planet. It’s very sensitive to temperature, as its effects can be visible in weeks. We should also be able to measure the rate of calcification during the past 50 years. This was already done on the Great Barrier Reef, which links up some 300 atolls. Researchers managed to determine that coral growth has dramatically declined over the past two decades. But this type of research has never been carried out on such a vast area.” Tara is scheduled to make 70 stops in 30 countries, some of which very far from the coastline, often less surveyed. “We’ll be able to tell whether this phenomenon is due to global change or local environmental stress,” Allemand continues. 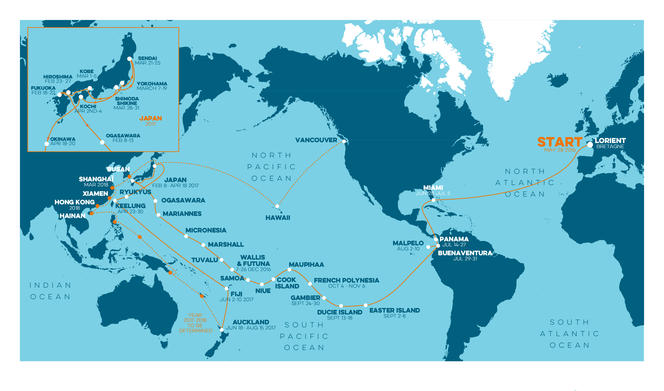 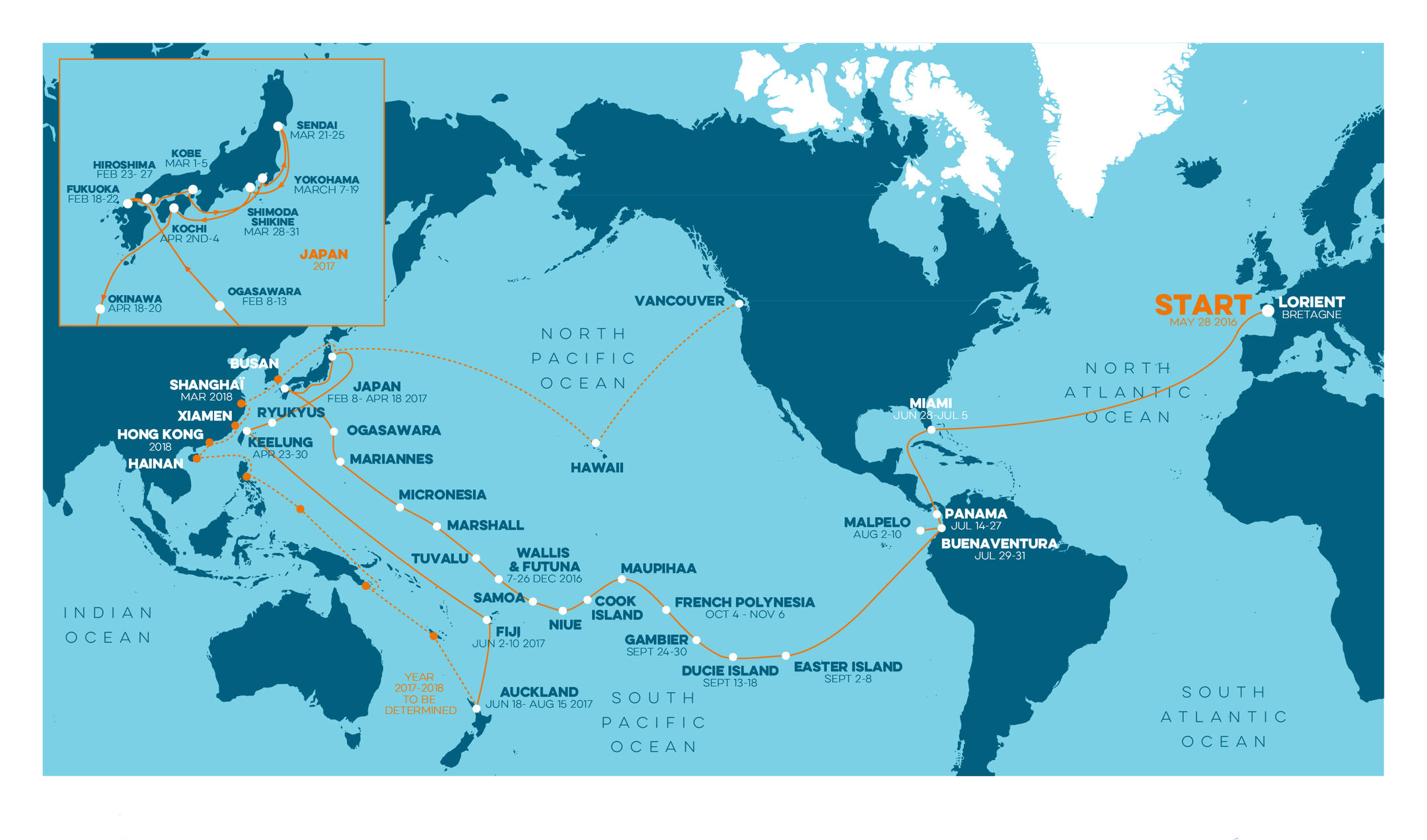 “The oldest coral we know of is 4,000 years old. In 1998, 500-year old colonies died—meaning that they had never undergone such stress before. Yet some corals can recover from bleaching events if these are short-lived. We also want to understand the effects that these small bleaching phenomena may have on the longevity of some species,” concludes Allemand. And he is not alone. Researchers know that coral can regenerate, by multiplying or finding new microalgae. Important bleaching events struck Hawaii in 2014 and 2015, yet in Kaneohe Bay, 70% of the corals recovered, showing the system's surprising resilience. We have also found that some types of symbiotic algae, like the recently-discovered Symbiodinium thermophilum in the Persian Gulf, can sustain temperatures of 35°C. Will coral in the Pacific have time to adapt? There are only a few of the many questions that the scientists onboard Tara will try to answer, as they set sail on another great oceanic expedition.