An Albatross Colony Flies towards Danger

An Albatross Colony Flies towards Danger

Alan/Adobe stock.com
Share
Share
An international study of a common albatross species has honed in on the chain reaction whereby ocean warming modifies the bird’s traits and demographics, ultimately leading to the decline of its population on the Kerguelen Islands.

Just ask the Ancient Mariner and he’ll tell you: no good can come from killing albatrosses. Yet not unlike the cursed voyage of Samuel Taylor Coleridge’s notorious literary character, our planet’s ecosystem is in for a shakeup if numbers of this seabird—at the top of the marine food chain—dwindle. And climate change is doing just that, currently placing at risk a colony of black-browed albatrosses that breed on the Kerguelen Islands in the French Southern and Antarctic Lands.

But which particular factors are to blame for reducing albatross population growth rates? To find out, an international research team has developed a mathematical model to explore the combined and interlinked effects of climate change, functional traits (physical or behavioral characteristics that influence the species’ interaction with its environment) and demographic rates (including survival or fertility rates), on the Kerguelen albatrosses.1 Not only do their findings shed light on this bird’s future, they also signal the importance of taking a full-picture approach encompassing the whole of a species’ life cycle in order to grasp the fate of its population. 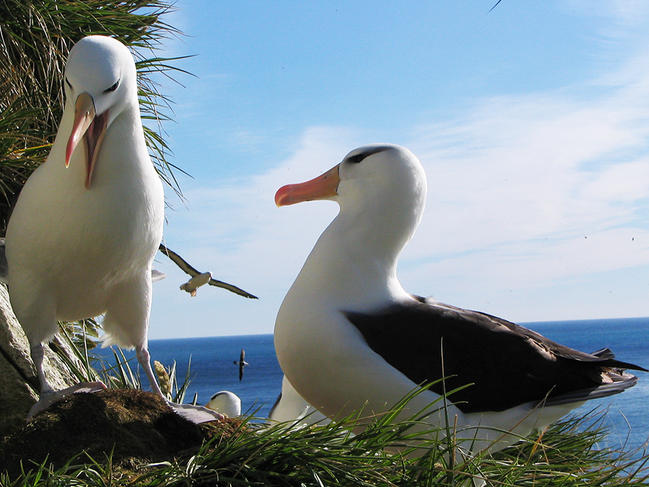 The Black-Browed Albatross Canyon colony in the Kerguelen Islands has been studied since the late 1970s. 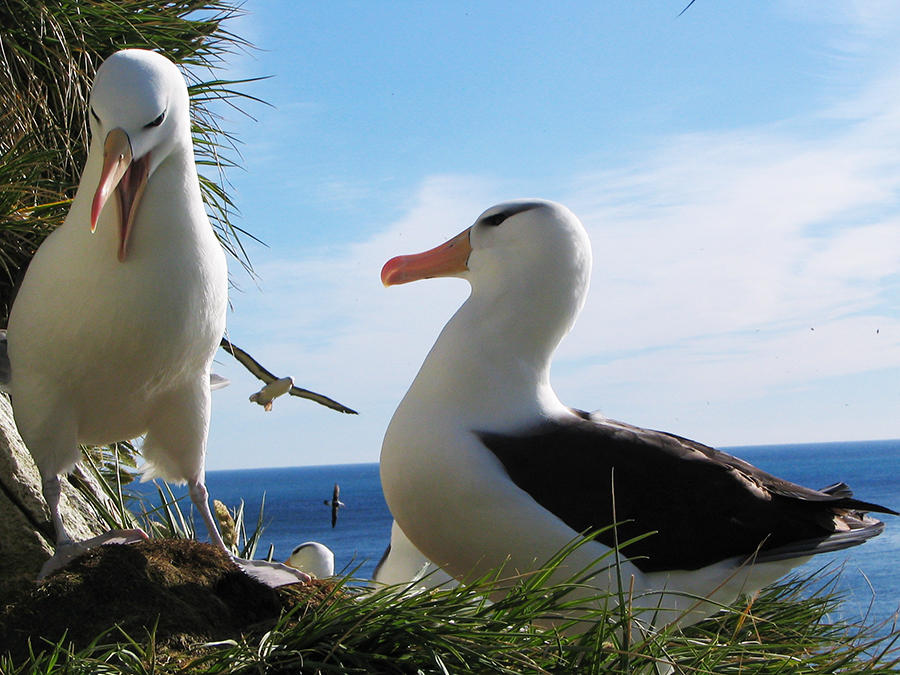 The decline of certain plants and animals is a known and dreaded consequence of climate change, but less understood are the intricate mechanisms that actually cause a given species’ population to diminish. Recent studies on certain terrestrial and freshwater animals show that climate change first acts on a species’ functional traits and demographic rates before a chain effect prompts changes in population growth rates, but marine ecosystems have largely escaped such scrutiny. To fill in this gap, researchers representing the CNRS, the Woods Hole Oceanographic Institution, the Swiss Ornithological Institute and the University of Amsterdam, turned their attention to a black-browed albatross colony that breeds on the Kerguelen Islands. Why this particular population? Environmental biologist Christophe Barbraud of the CEBC2 points to ongoing long-term studies on these birds. “Since the 1980s, the species has been part of a capture-recapture program and every year, banded birds are recaptured for checking and measuring. So we already knew how climatic changes have affected their demographic rates. Our goal was to go one step further by finding out how climate also affects their functional traits, and as a result, their demographic rates.”

Easier said than done, for delving into the bird’s functional traits required field studies in one of the world’s most remote spots. “One complicating factor was having to go to the Kerguelen Islands and monitor the birds full-time during the breeding season,” observes Barbraud. “But fortunately we have reliable support from the French Polar Institute Paul-Emile Victor, which accomplishes a huge logistical task to get us there year after year to keep following up the birds.” In this way, the team equipped 125 individuals from 2006 to 2013 with tiny GLS (global location sensor) devices capable of recording data with a bearing on functional rates, namely the time they spend sitting on water, and the number of transitions they make between air and water—two elements that indicate how frequently the birds forage and feed.

The other challenge, of course, was to devise a method to process the accumulated masses of data on demographics and functional traits, along with climate data, notably satellite information on sea surface temperatures from 1982 to 2015. To this end, the team drew on their mathematical expertise to create a matrix population model to trace the dynamics of the albatross population. 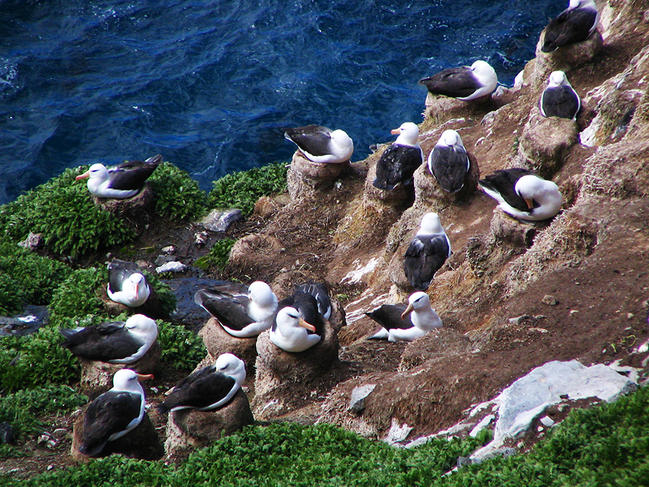 The studied black-browed albatross colony, "Thalassarche melanophris," is located in a steep canyon sheltered from violent winds. For more than 40 years, CNRS teams in Chizé have been trying to evaluate the extinction susceptibility of this endangered species in the face of increasing threats due to global changes. 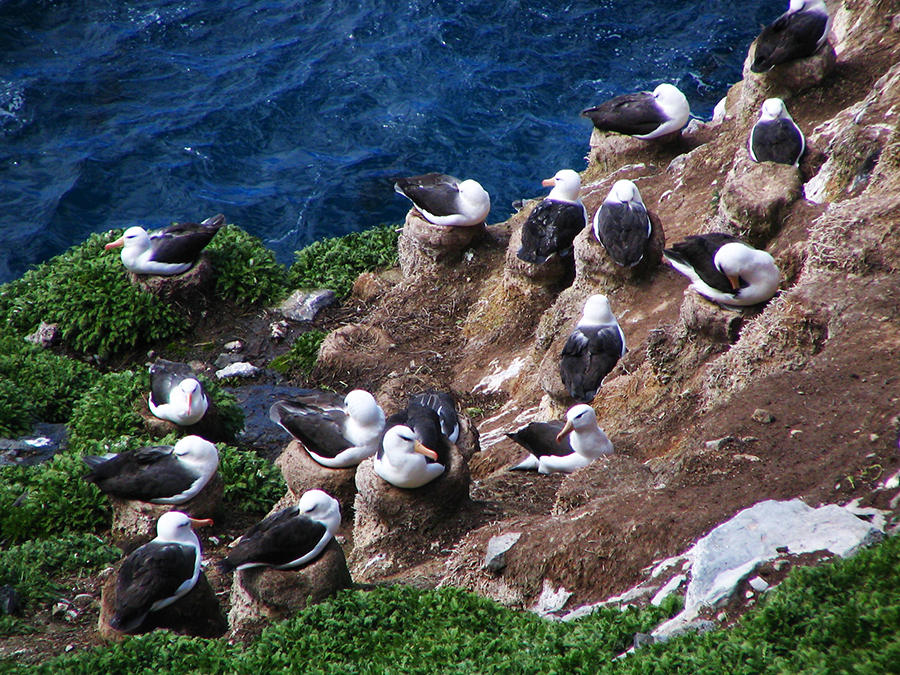 The studied black-browed albatross colony, "Thalassarche melanophris," is located in a steep canyon sheltered from violent winds. For more than 40 years, CNRS teams in Chizé have been trying to evaluate the extinction susceptibility of this endangered species in the face of increasing threats due to global changes.
Christophe Barbraud
Christophe Barbraud
Share
Share
The hardest hit by the phenomenon are juvenile birds that have just started fending for themselves—and naturally, their reduced survival rates will have carryover effects on future reproduction rates.

One striking innovation of the researchers’ model, Barbraud indicates, is its capacity to “assess the sensitivity of the population growth rate to individual parameters, whether climate variables or functional traits in addition to demographic rates.” In this way, the team detected that as far as climate goes, population growth rates are most affected by increased warming of the sea in late winter. The biologist explains that “higher sea surface temperatures are generally bad news for seabirds as they reduce the oceanographic effect responsible for the production of prey.” A tendency intensified in late winter, he suggests, as this is a “transition period when winter food sources are depleted and the spring bloom is yet to come.” The hardest hit by the phenomenon, according to the study, are juvenile birds that have just started fending for themselves—and naturally, their reduced survival rates will have carryover effects on future reproduction rates.

As for functional traits, the study shows that population growth rates are particularly at risk if foraging behavior declines during the pre-breeding period. Barbraud notes that albatrosses “need to build up body fat in order to reproduce as they have to fast during the egg-incubation stage.” Those lacking physical resistance during this key phase are less likely to reproduce successfully.

Now that the team has hatched its valuable approach for detecting how different variables act on population growth rates, Barbraud envisages more fine-tuning ahead. “Our study focused on sea surface temperatures as the prime indicator of climatic change, but it’s not the only climatic parameter that influences albatross population growth. Likewise, we only looked at a few functional traits out of others that can be measured. Our study also needs to integrate human-related elements, like fishing accidents, that contribute to albatross mortality.” All strong directions for the team’s further research.

On the basis of the study’s results, the long-term future of the albatrosses on the Kerguelen Islands looks “fairly bleak,” admits the biologist. However, we’re still a long way off from the absolute doom announced by the Ancient Mariner. Black-browed albatrosses are not confined to the Kerguelen Islands, but also live in other parts of the globe. Comparative studies with these other colonies, namely the one on South Georgia Island in the South Atlantic, “can offer us leads on the species’ adaptive responses in different environments.” Not only this, “the albatross may adapt by colonizing currently hostile areas that become more favorable for birdlife as a result of global warming,” Barbraud concludes.