Embryonic cells communicate to organise themselves

Embryonic cells communicate to organise themselves

Embryo of the Cuban Tree Frog, visible through its transparent egg.
Heidi & Hans-Jurgen Koch / Minden Pictures / Biosphoto
Share
Share
Like us, embryonic cells communicate to take decisions and thus transform from a fertilised egg to an embryo with a well-defined shape. Scientists have recently demonstrated the diversity of their exchanges, ranging from long-distance cries for some to short-distance whispering for others.

How does an animal develop from a simple fertilised egg? This question has fascinated biologists for centuries. It is all the more complex as it involves a dual process: cells differentiate into muscle or skin, etc. at the same time as they organise themselves in space in order to form an embryo with a clearly defined shape. Yet how do embryonic cells manage to produce the larval shape characteristic of the species considered?

“For the past century, we have known that these units need to communicate to achieve this result,” explains Patrick Lemaire, an embryologist at the Montpellier Cell Biology Research Centre (CRBM),1 in the south of France. “They cannot decide of their own fate. And this even applies to ascidians, marine organisms in which early embryogenesis is so reproducible from one individual to another (you can name a cell and find it in exactly the same place in all specimens!) that it was initially thought that each cell inherited a precise portion of the egg which, because it contained all the instructions regarding its fate, freed it of the need to communicate with its neighbours.”

Do embryonic cells “talk” similarly in all species though? This is a vast question addressed in a study whose some unexpected results2 featured in a paper co-signed by the biologist and published this summer in Science.

The signals most widely studied with respect to cell communication are chemical, and they have been highly conserved during evolution. In vertebrates, the small proteins secreted by cells travel distances that can reach up to seven cell diameters; this type of communication is adapted to the highly dynamic behaviour of embryonic cells in these animals, where they are quick to migrate and swap places with their neighbours. “The signals they emit, which could be characterised as cries, travel long distances,” the researcher explains. “In this long-distance exchanges, it is local concentrations of the protein that will allow the cells that receive the message to choose their fate; in other words, the type of cell they will become in order to form a particular tissue.” 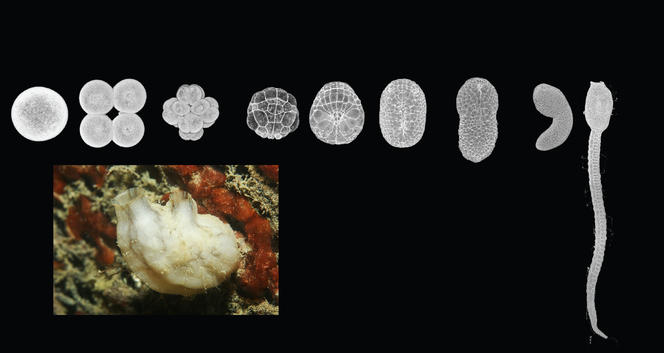 From fertilised egg to larva: the embryonic development of a white ascidian (P. Mammillata, shown above in its adult form). 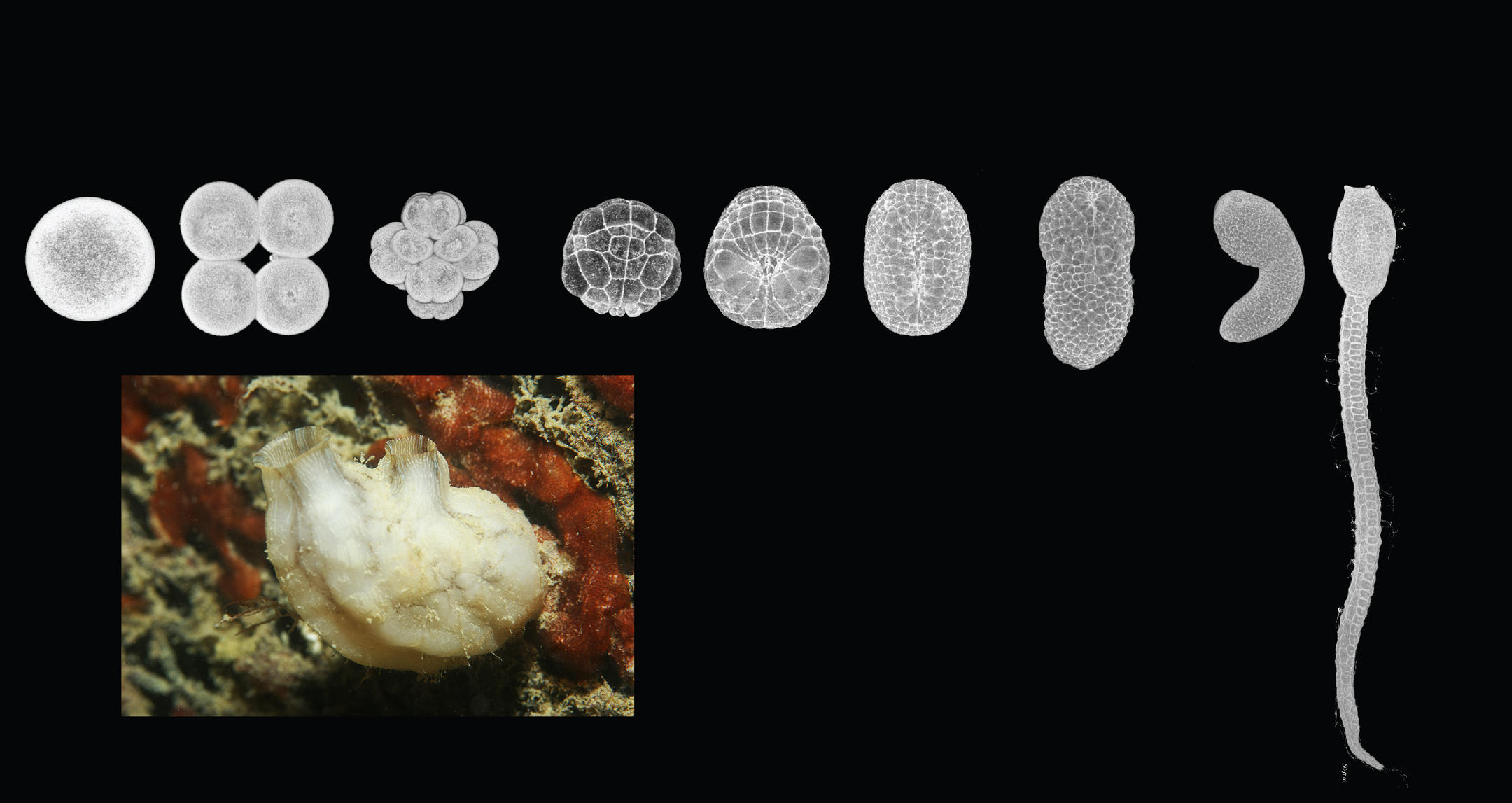 Is this long-distance communication a general principle of embryogenesis? To find out, the scientists focused on the above-mentioned ascidians, as they have the advantage of only containing a few hundred cells at the early embryonic stage (as opposed to several tens of thousands in flies or mice, for example). They labelled these units with fluorescent proteins and used latest-generation light sheet fluorescence microscopy (LSFM) to monitor their behaviour. "Under our system, the membrane became fluorescent so we were able to follow the position, shape, divisions and contacts between each cell and its neighbours," Lemaire says. This was a first: never before had all the cells in an embryo been monitored over a long period of time.

The result of these observations, supplemented by modelling performed in partnership with scientists from the French National Institute for Research in Digital Science and Technology (INRIA), provided evidence of this astonishing process. “We were able to show that there is  very little movement between the embryonic cells of ascidians, unlike what has been observed in vertebrates,” adds Lemaire. “More surprisingly, this immobility was accompanied by an almost perfect conservation of the contact surfaces between neighbouring cells, the variations recorded between one individual and another being less than 20%”. These static embryonic cells opted for a short-distance method of communication: they spoke by reading the surface of the cells with which they were in direct contact – or rather “whispered”, to use the analogy proposed by the scientists. 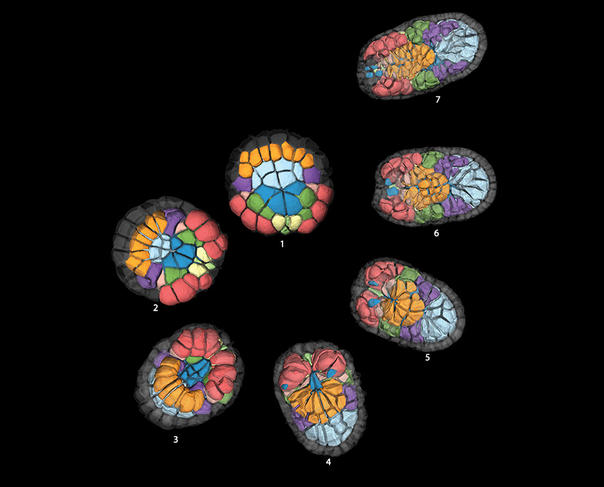 Modelling of the larval development of the ascidian P. Mammillata. The colours correspond to the tissues that the embryonic cells will form. 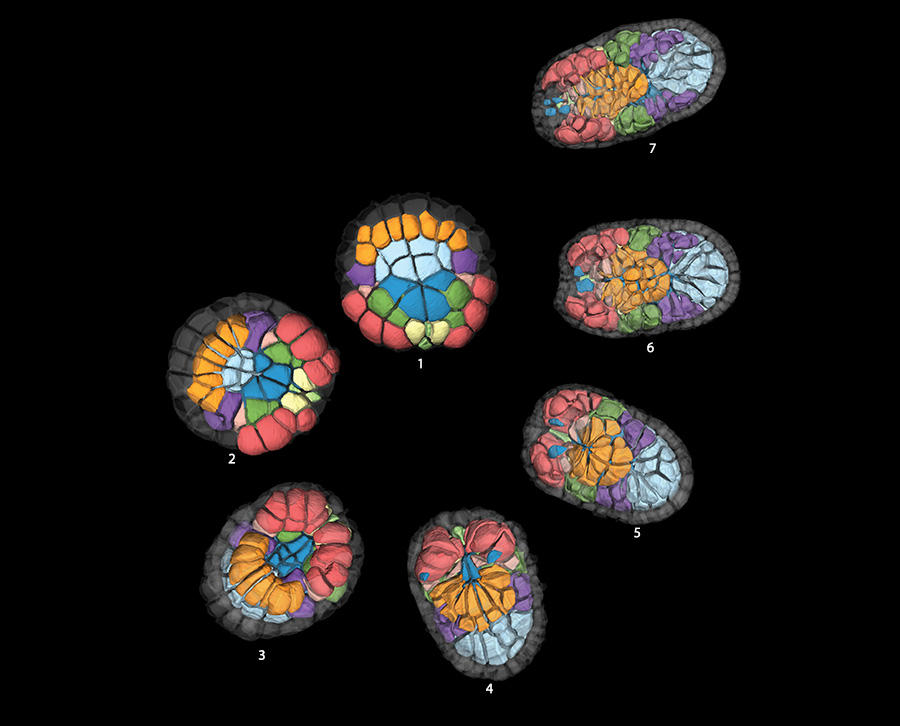 These findings suggest that the dynamics of cell movements varies considerably between animals – much more than might have been expected – and seems to be closely linked to the range of the signals exchanged between cells. By broadening the repertoire of cell communication mechanisms, this work opens new perspectives regarding our understanding of the self-organisation strategies adopted by different life forms.

Cries or whispers between cells

See author's bio
Is there a point of no return in ecosystems?Previous
Indigenous populations hard hit by Covid-19Next

Opinion
Why Moods Affect our Health