Home / Articles / What nanoparticles do to our cells

What nanoparticles do to our cells

Home / Articles / What nanoparticles do to our cells

What nanoparticles do to our cells

Titanium dioxide beads (TiO₂) observed under a scanning electron microscope (SEM, magnification of 2000, false colours).
Bertrand Rebière / ICGM / CNRS Photothèque
Share
Share
During the past few years, nanoparticles have been increasingly present in our everyday lives. To gain a better understanding of their health impacts, several studies have focused on the effects they have on our bodies and cells.

Silicon dioxide (or E551) in powdered food to stop it clumping; calcium phosphate (or E341) in toothpaste; titanium dioxide that makes white paints shiny; antibacterial and antifungal silver nanoparticles in textiles; gold nanoparticles that enable the targeted destruction of cancer cells… since the end of the 1990s, manufactured nanoparticles (as opposed to those emitted by volcanoes or due to traffic pollution) have spread throughout our everyday environment. Produced from metals (titanium, silver, etc.) but also from carbon, polymers or organic molecules (lipids, peptides, etc.), these substances by definition have dimensions comprised between 1 and 100 nanometres,1 which is more than 10,000 times smaller than a grain of table salt. 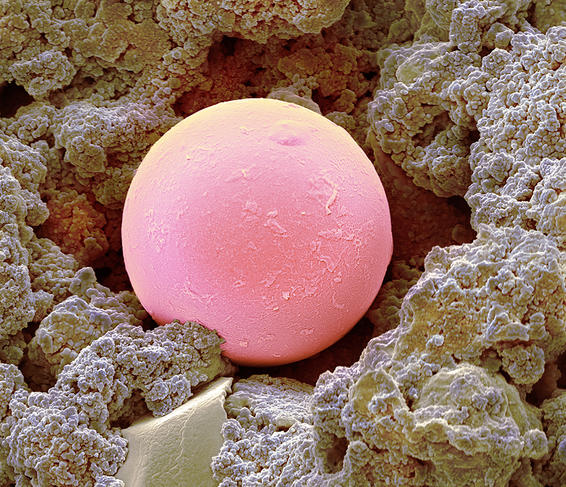 Silicon microsphere from sun cream seen under a scanning electron microscope (SEM, magnification of 16,000 and false colours). Silicon microspheres offer protection against the sun and have a thermoregulating effect thanks to the strong diffusion properties of microspheres in the infrared spectrum. 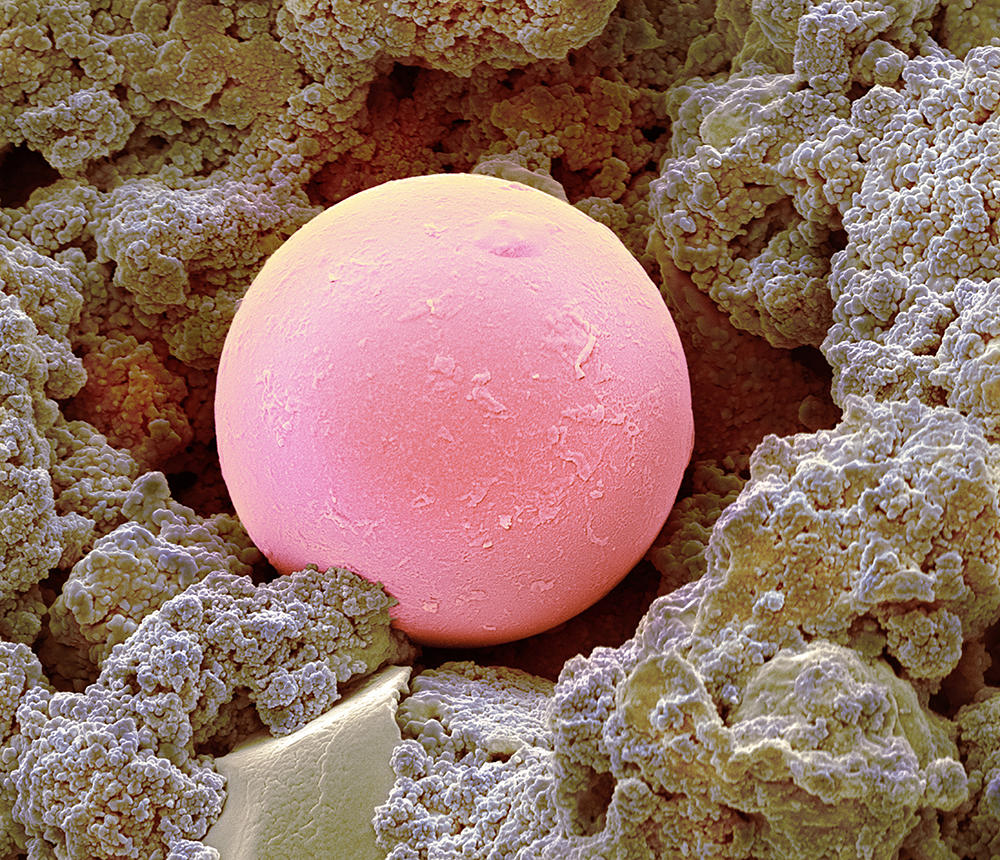 This minuscule size means that their surface (where they interact with their environment) is greater relative to their volume, endowing them with novel characteristics in terms of resistivity, electrical conductivity, solubility, chemical reactivity and antibacterial or anti-agglomerant properties; hence their unfailing success and the interest of industry. On the other hand, the size of these substances raises serious concerns regarding their potential effects on health.

“Because of their small size, nanoparticles can cross different physiological barriers – such as that which separates the brain from the bloodstream (blood-brain barrier), the skin or the placenta that protects a foetus – and thus spread throughout the body,” explains Aurélie Niaudet, chemical engineer in the Risk Assessment Department at the French Agency for Food, Environmental and Occupational Health and Safety (ANSES), which in 2020 published a report on nanomaterials in foods.2 What do we know today about these potential health risks? “Several studies in animals have indicated that some nanoparticles can accumulate in different organs and have a variety of effects, like growth retardation, developmental abnormalities, allergies, cancers, or be deleterious to the nervous system,” the scientist points out. For example, regarding titanium dioxide (additive E171), which gives a white colour to pastries and confectionery, a study in rats3 published in 2017 by a team of researchers from France and Luxembourg showed that chronic oral exposure to this substance induced precancerous lesions in the colons of 40% of the animals exposed. This led to it being banned in France in 2020, and throughout Europe as of January 2022. 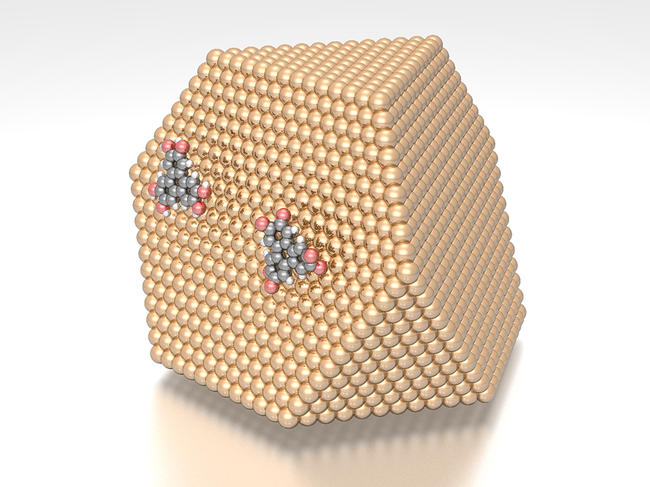 Artist’s impression of the surface of a copper nanoparticle with the hexahydroxytriphenylene (HHTP) catechol molecule. 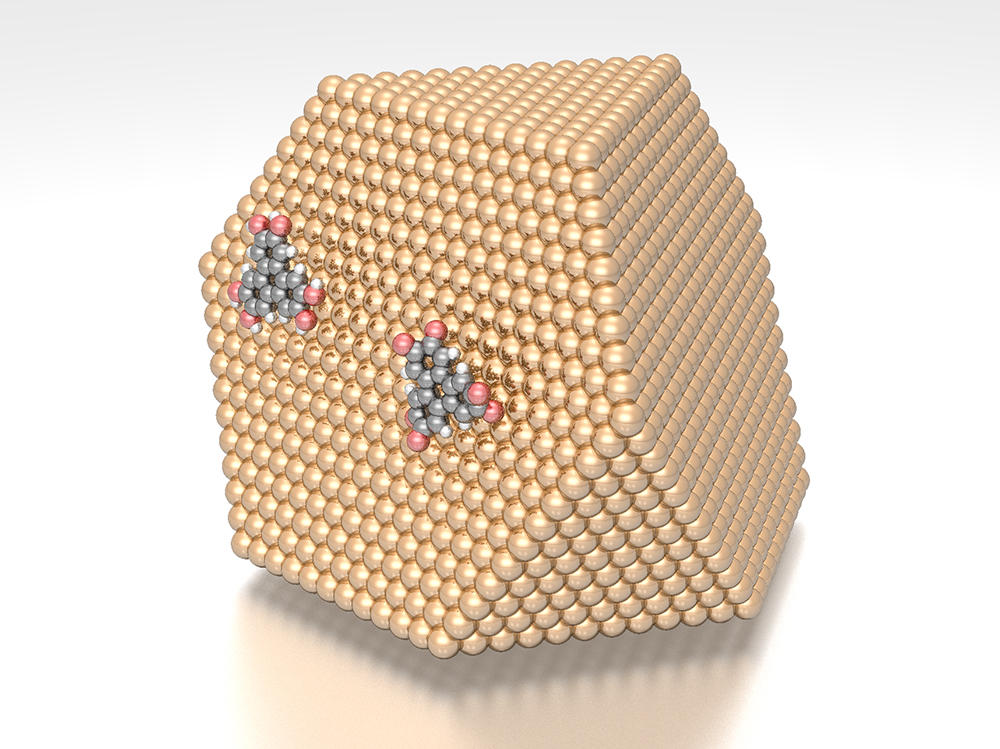 Other studies have revealed some of the processes by which these particles and their derivatives interact with our cells. Work4 published in 2021 by a European team – including scientists from the CNRS – showed that metallic nanoparticles act via an “insidious” mechanism: they transform catechol molecules, normally responsible for protecting DNA from oxidation (an adverse reaction)… into semiquinone and quinone molecules which are in fact most harmful to DNA! The problem is that “although research on the impacts of nanoparticles has developed considerably in recent years, there is still very little epidemiological data on their health effects in humans,” the researcher emphasises. Furthermore, information is lacking regarding the fate of these substances in the body; in this regard, the committee for prevention and precaution (a body whose members are appointed by the French Ministry for ecological transition) indicated in a report5 published in 2020 that it was necessary “to characterise and monitor the transformation of nanomaterials in biological matrices”.

A wide-ranging analysis of metallic nanoparticles

As it happens, the team led by Florence Gazeau, a physicist, at the MSC laboratory6 is focusing on this field of research. “In order to understand the potential damage caused by metallic nanoparticles to living cells, we need first of all to clarify their fate in these cells,” she points out. During studies7 published in 2019 – in which Alice Balfourier, now a researcher in the LBM,8 participated in the context of her PhD thesis – the scientists obtained a surprising result. For six months, they monitored the biotransformation of gold nanoparticles captured by fibroblasts (connective tissue cells). They achieved this by combining transmission electron microscopy imaging (a microscopy technique whose resolution can reach 0.08 nanometre) and study of the expression of more than 18,000 genes over time.

While it had generally been accepted until then that gold nanoparticles remained intact indefinitely in the lysosome (a structure that acts as a “waste dump” in a cell), it was found that within a few weeks, these substances underwent degradation and then the recrystallisation of gold into nanoleaves. This phenomenon had previously been observed with gold ions. Most importantly, this suggests that the impact of gold nanoparticles on cells depends more on the type metal they are made of than their nanoparticulate nature. 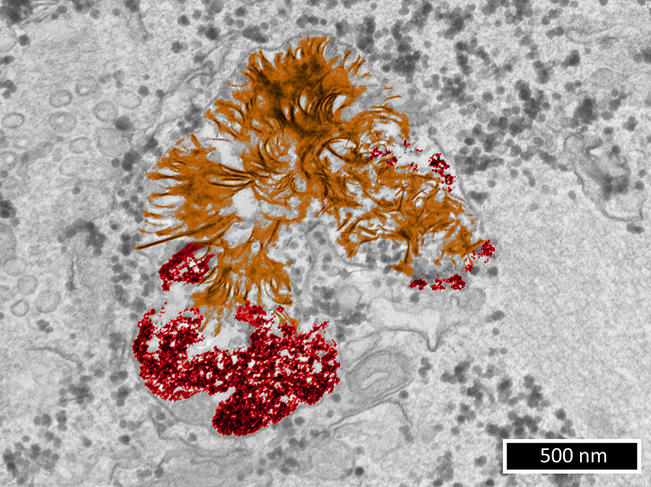 In the context of research on the degradation of gold nanoparticles within cells, a scientific team demonstrated the presence of non-degraded nanoparticles (in red) together with degradation products taking the form of nanoleaves (in orange). 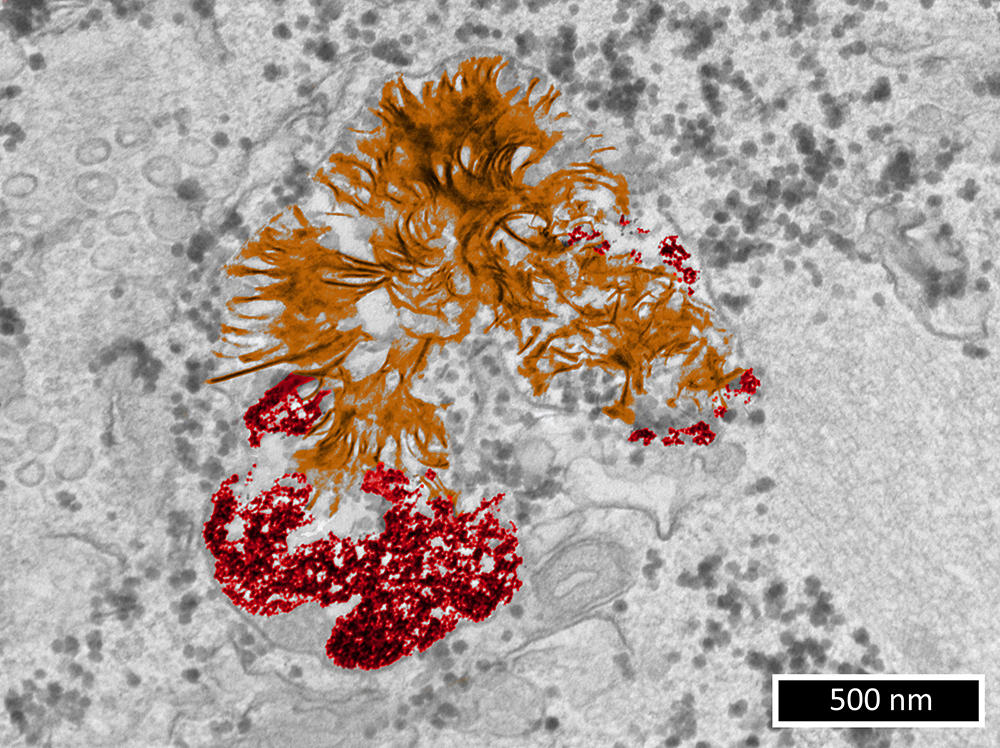 Work published in September this year9 extended this initial study: “We wanted to know whether our surprising discovery concerning gold – i.e. that cells respond similarly to this metal whether it is in the form of ions or nanoparticles – might also be true of other metals,” explains Florence Gazeau.

This time, the scientists studied the molecular response of human cells to nanoparticles of eight different metals: gold, cadmium, copper, iron, platinum, silver, titanium and zinc. “Our aim was to compare the response of human cells to these different elements in terms of gene expression, and hence the production of proteins. We wanted to see if this cellular response was similar or whether it varied depending on the type of metal and its formulation,” she explains.

The team performed a meta-analysis of 56 studies. These concerned the level of expression of several thousand genes (a total of 14,912) in different cell types (skin, liver, muscle, etc.) exposed to metallic ions or particles for 1 to 24 hours.

A conclusion applicable to all the metals studied

It became clear that for all the metals listed above, the genes overexpressed after exposure were virtually the same whether the cells had been exposed to ions or to nanoparticles derived from these metals. “This result means our 2019 findings regarding gold apply to all the metals studied: in other words, cells are more sensitive to the metal ions released by nanoparticles than to the intrinsic structural properties of these nanoparticles, such as their size or shape,” says Alice Balfourier. 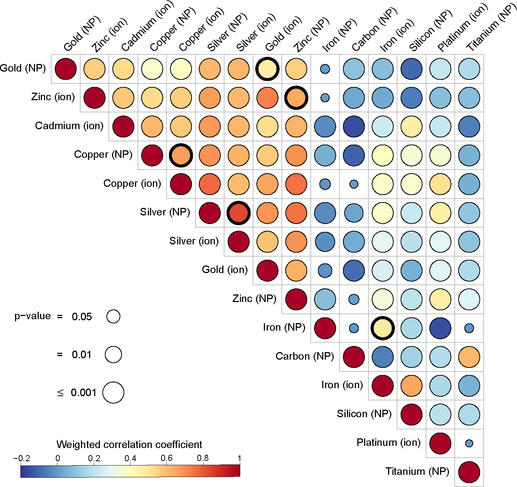 This diagram shows that the responses of cells to nanoparticles (NP) and ions of the same metal are correlated (circles with thicker outer lines). The intensity of the correlation in red shows that for a group of metals (zinc, copper, gold, silver and cadmium) the cellular responses are all correlated. 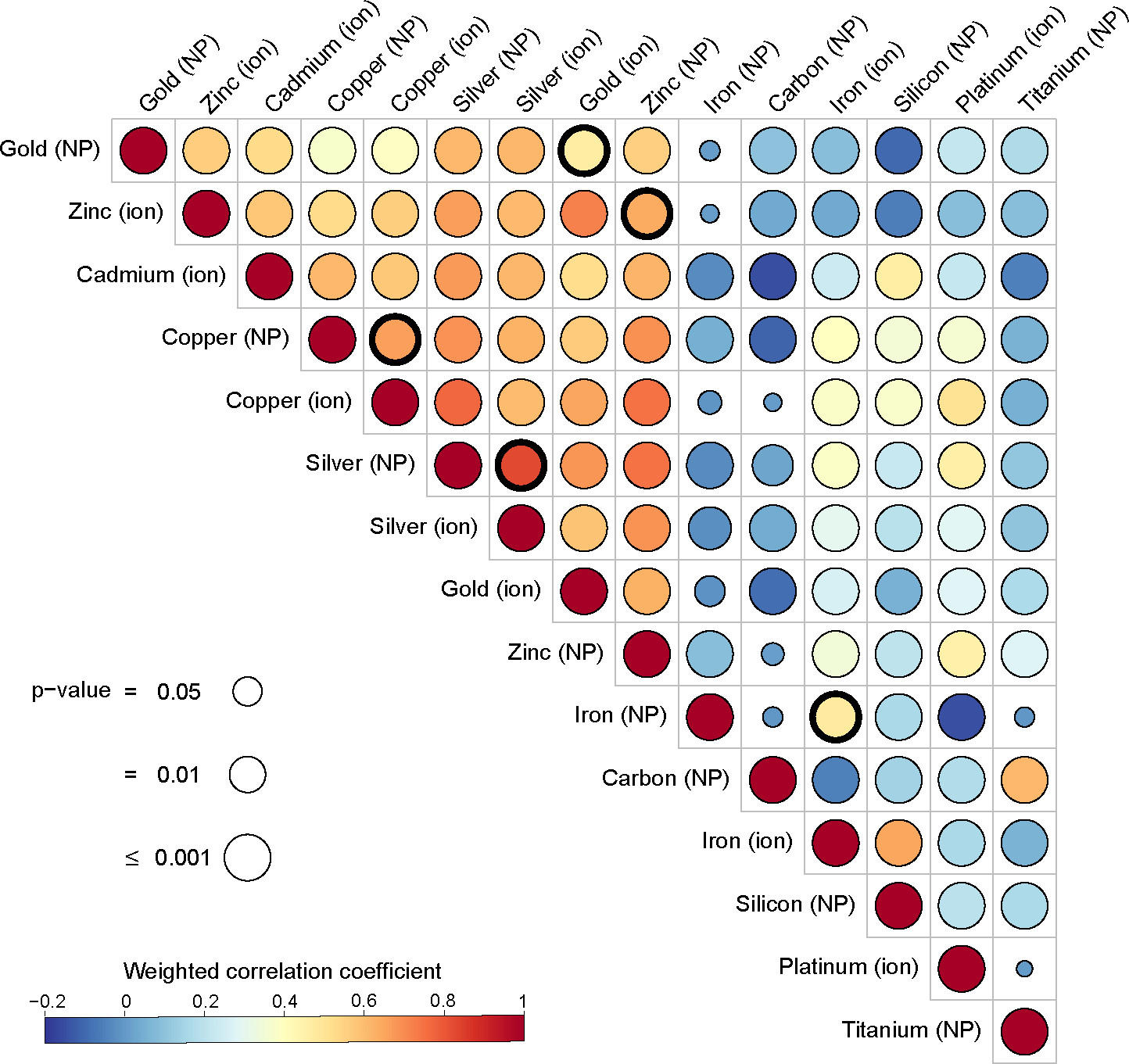 And that is not all! The team also noted that with five of the eight metals examined (cadmium, copper, gold, silver and zinc), the nanoparticles triggered similar biochemical reactions at the cell level. Indeed, “with nanoparticles based on these five metals, we observed an overexpression of the same group of genes, coding for metallothionein proteins. These play a crucial role in regulating cell contents in essential metals (copper, zinc, etc.) and in detoxifying cells of non-essential metals (silver, cadmium, gold, etc.)”, details the biochemist.

Taken together, these findings indicate that firstly, the effect of metallic nanoparticles at the cellular level could be predicted from the impact of their constitutive ions, which is often better elucidated, and secondly that the metals making up the nanoparticles can activate identical genes. This may facilitate the investigation of nanoparticle toxicity in the future.

Video
Walking with our ancestors
Chemistry