Using drones, researchers will soon be able to predict when fog dissipates or even create accurate models of clouds.
PROJET SKY SCANNER
Share
Share
Building a 3D reconstruction of an abbey, modeling clouds, or monitoring the life of a bird colony: drones open up a whole range of new possibilities to researchers. CNRS News unveils some of these innovative projects.

Drones are not just for spying on neighbors or speed racing. They are now used by biologists, architects and meteorologists, among others, to carry out new research projects. Their affordability, combined with their manoeuvrability and minimal weight—a mere two kilograms for the lightest—make drones an ideal tool for researchers, who are increasingly relying on them to carry cameras and various miniaturized sensors. Equipped with GPS and navigational tools, these drones can even fly on autopilot and follow a pre-recorded flight plan. Their only real drawback is their lack of autonomy. "At the moment, it is around 20 minutes for rotary-wing drones (a sort of helicopter with 4, 6 or 8 rotors) and about one hour for fixed-wing drones, similar to model aircraft," says Simon Lacroix, a robotics expert at the LAAS.1 But however exciting the possibilities they conjure up, the best is yet to come: in a few years' time, researchers will be able to deploy entire fleets of drones, roaming the skies in search of ever more data. In the meantime, CNRS News takes a look at five projects carried out by French researchers.

It is hardly surprising that biologists were the first to see the value of drones. Equipped with a high-definition camera, a drone is the ideal tool to map biodiversity, and in particular to carry out surveys of animal populations, in areas that are difficult to access. "For the moment, we're operating at an altitude of a few tens of meters," says David Grémillet, a biologist at the CEFE.2 Researchers are very tempted to get closer, as amateur wildlife videos shot using drones are invading the Net. "Using drones is fine, but it is essential to do so without disturbing the animals," points out Grémillet, whose team recently carried out a real-life test on a population of flamingos in France's Camargue region. "We wanted to find out how close we could get without causing the birds to move their heads or run along the ground. So we varied the angle and speed of approach, the color of the drone, and the final distance between the drone and the flamingos." 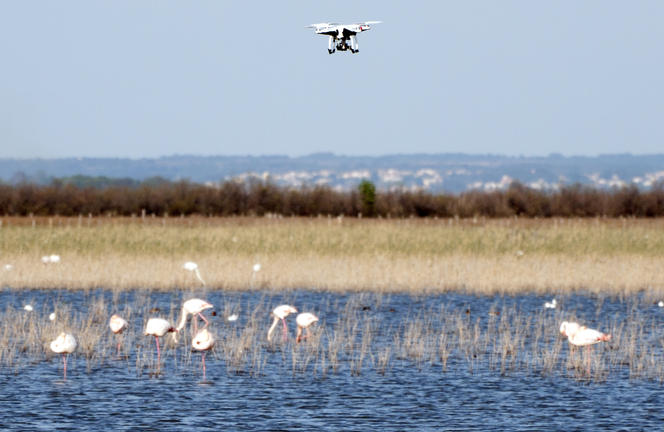 A drone flying over a flock of flamingos in the French Camargue region. 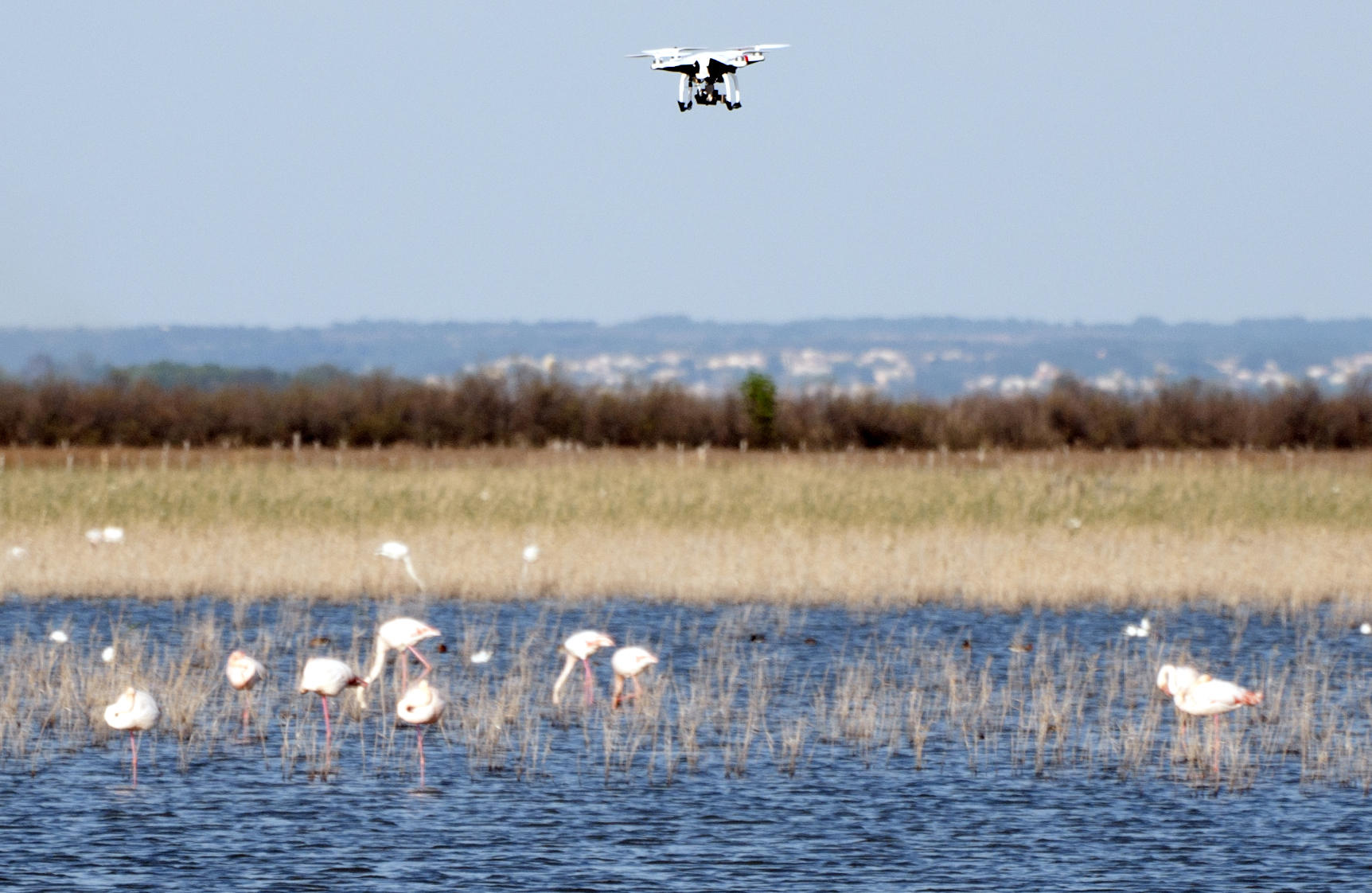 The results were a real surprise to the researchers, since they were able to fly the drone as close as four meters from the birds without them showing any signs of stress, probably because the drone doesn't look like any of their known predators. "The only thing that made them look round was a vertical approach, right above the group, because this is their blind spot," says Grémillet, who is hoping to use drones to survey cliff-nesting seabirds or monitor migrations. Provided they can be flown close enough to wild animals, drones could eventually download data from measuring devices attached to them, such as GPS location, heart rate, energy expenditure, temperature and other key data for the study of wildlife, without the need to recapture the animals.

Uncovering the real life of a cloud

Even today, clouds remain a mystery to meteorologists. Although it is known how they work in theory, no one has ever observed the real life of a cloud over a long period of time. How does it form? How does it develop? What triggers rainfall? Drones could soon provide answers to these questions. By 2017, the Sky Scanner project, led in particular by the National Centre for Meteorological Research (CNRM) and the LAAS, hopes to get three smart drones that can communicate with each other to fly inside clouds.

How do clouds form? What triggers rainfall? Drones may soon provide the answer.

"For now, we are still at the demonstration stage," explains Greg Roberts, a specialist in aerosol-cloud interactions at the CNRM-GAME.3 "Eventually, we hope to fly fleets of dozens of drones that will simultaneously record all the relevant data, such as temperature, humidity and pressure, of course, as well as solar radiation, turbulence, number of aerosols, size of water droplets, and so on, in different parts of the cloud." Another ongoing project will study fog dissipation. "Current models are unable to predict at what time of day fog will lift," Roberts says.

Until now, archaeologists have used aircraft to detect the traces of Gallo-Roman remains or medieval settlements buried beneath fields. However, planes have important limitations: they are not allowed to fly below 150 meters, which makes it impossible to take high-resolution images, while the high cost of flights restricts the number of possible missions. The problem is that light, humidity and visibility conditions vary considerably from one day to the next, and there is no guarantee that traces of a buried settlement will definitely be detected. "However, drones enable us to repeat flyovers as often as we need, and to get very close to the areas we are exploring," explains Nicolas Poirier, an archaeologist at the TRACES laboratory.4 They are equipped with conventional digital cameras, or with infrared thermal cameras, which have regained popularity with the arrival of drones.

Thermal cameras on board drones help identify the location of buried foundations, which are not necessarily visible to the naked eye.

"Thermography was tested in archaeology in the 1970s and subsequently abandoned, since it was too complicated to use in aircraft," says Poirier. "Today, these cameras are digital, miniaturized and can efficiently detect thermal anomalies in the ground caused by the presence of foundations." The cameras make use of the fact that walls have greater thermal inertia than the surrounding sediments, and will therefore heat up more slowly when temperatures rise, and vice versa. They can also detect thermal variations in a field of cereals: plants whose roots come up against foundations are affected by water stress and tend to warm up more than the others.  "With this technique, we can actually make out the outline of buildings, it's magical!" enthuses Poirier. Eventually, the scientists at the TRACES laboratory hope to use drones for preventive archaeology, by helping to detect buried archaeological sites and save them from the bulldozers.

Repeatedly battered by storms, such as Xynthia in 2010 and last winter's successive storms, France's Atlantic beaches are being inexorably eroded away. The mission of the scientists at the LDO5 is to measure this process as accurately as possible. To do this, drones are the perfect choice. "By flying them at a height of 0 to 150 meters, the maximum legal limit,6 we can obtain maps at a very high resolution of less than 3 centimeters," explains research engineer Jérôme Ammann. Combined with pictures taken by underwater imagers, they can be used to model a beach in 3D and get an accurate view of the erosion process. 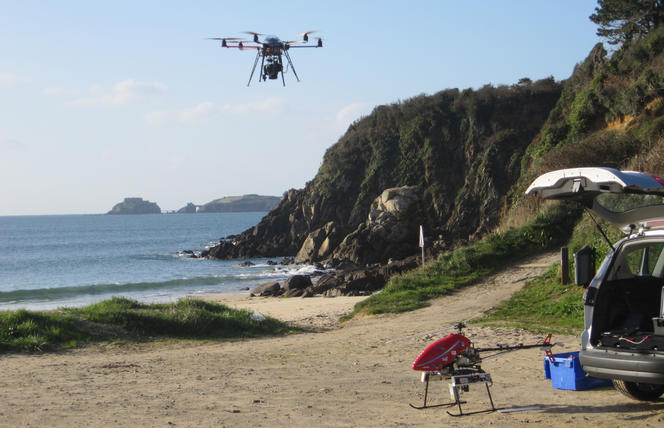 Drones are permitted to fly at an altitude between 0 and 150 meters, unless an exemption is granted, which makes it possible to obtain very high-resolution maps. 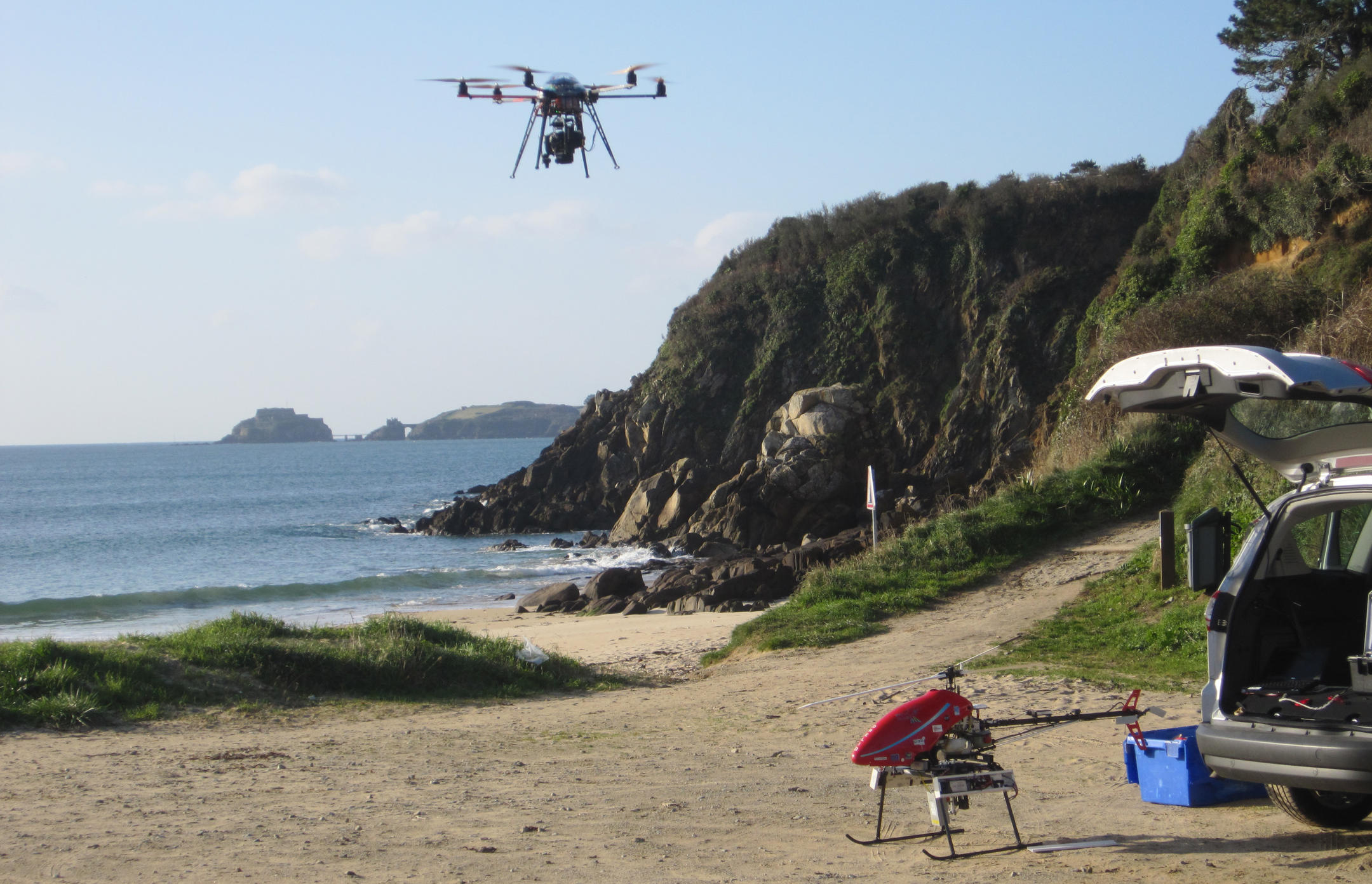 Drones are permitted to fly at an altitude between 0 and 150 meters, unless an exemption is granted, which makes it possible to obtain very high-resolution maps.
OSU IUEM
OSU IUEM
Share
Share

year after year to facilitate comparisons. The accuracy of the data collected and the time saved are unparalleled. "It used to take two days for researchers equipped with a GPS to cover a beach on foot. Today, a drone takes a quarter of an hour to do the same job!" Ammann rejoices.

A stone-by-stone survey of the Theater District of Pompeii (15,000 m2 of ruins), produced with a drone in a mere 50 minutes: this is the feat achieved by architects at the MAP laboratory.7 "In all, 850 high-definition photographs were taken, following an extremely precise flight plan downloaded into the drone," says Renato Saleri, head of the MAP's drone platform. "We then used photogrammetry software (a process derived from the resources used by France's National Institute of Geographic and Forest Information) to produce the final document." This tool exploits the very high redundancy between images (a minimum 80% overlap) to show the relief and reconstruct the structures in 3D. The document, produced after 24 hours of computing time (!), will make it possible to create 3D archives of the site, which will be used in particular for future restoration work. 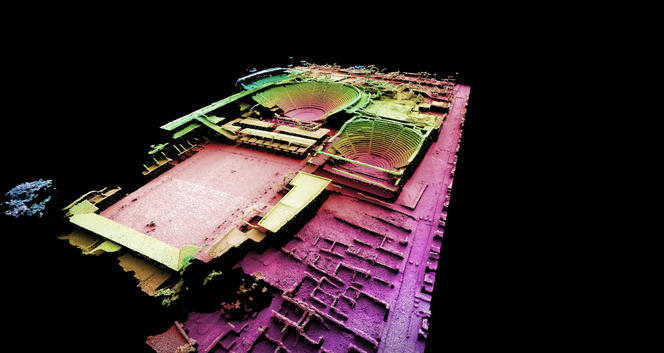 Modeling the Theater District of Pompeii required a flight of a mere 50 minutes, during which 850 images were taken. 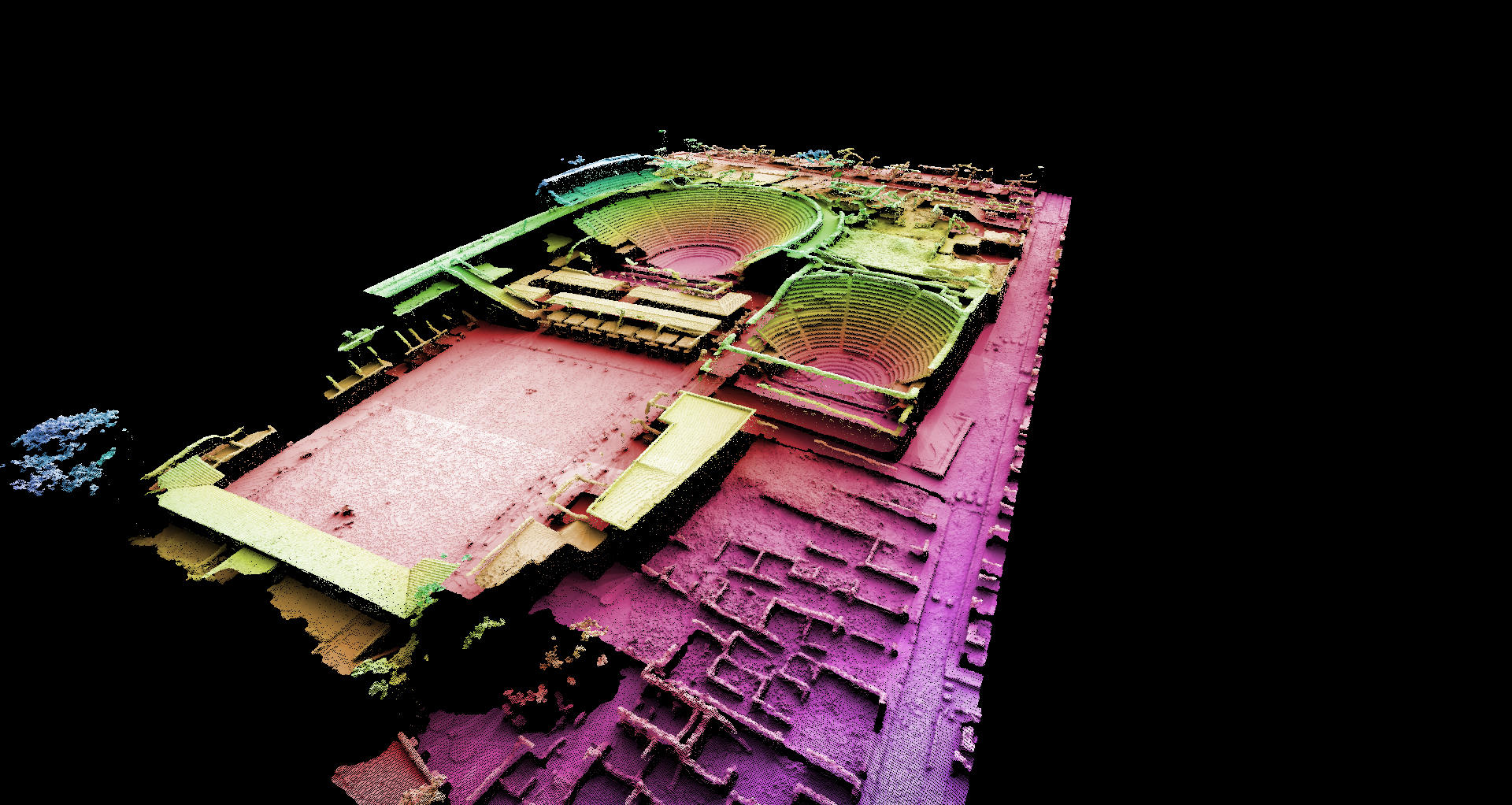 Other MAP researchers' achievements include modeling part of a dike (on a diversion canal of the Rhône river) in order to detect possible damage, and a survey of the interior of the Saint-Nazaire basilica in Carcassonne (southwestern France), restored in the late 19th century by Viollet-le-Duc. This required an aerobatic feat carried out by a researcher specially trained in flying drones.