CNRS technologies at the CES 2020

CNRS technologies at the CES 2020

Every year since 1967, the world's leading actors in new technologies have met in Las Vegas for the Consumer Electronics Show. From January 7–10, more than 4,500 companies ranging from multinationals to start-ups will present their latest high-tech innovations. With 360 start-ups represented in 2019, France was in third place after China (second) and the US. This year, many of its start-ups—including some born in CNRS laboratories—will once again be on site seeking new markets, clients – and fame.

"It is an important event," says Gaël Patton, co-founder of Icohup (see below), who has attended the CES for the past three years. "The first year we were there to discover a new world: that of start-ups. We had just emerged from the laboratory with our project! Today we have a business-oriented approach, as we are meeting with clients, partners, and investors. It's a trade fair that provides good visibility, and positions us among companies with international ambitions," he adds, indicating that unlike similar European events, the CES is less "partitioned", allowing for greater exchange between start-ups and large groups.

Here is an overview of ten start-ups linked to CNRS research that will be attending the CES this year.

Actronika
The haptic system developed by the start-up Actronika, which was created in 2015, can produce dozens of different tactile sensations. Developed from research conducted at the Institute for Intelligent Systems and Robotics (ISIR),1 it was designed to be integrated within virtual reality systems, connected objects, vehicle cockpits, and laboratory instruments.

Chronolife
Chronolife, which was launched in 2015, provides predictive medical solutions to assist with diagnosis. It will present its connected T-shirt, whose integrated algorithm measures vital signs in order to help diagnose and monitor patients suffering from heart failure. The technology consists of a T-shirt equipped with six sensors, as well as an application that performs remote monitoring. 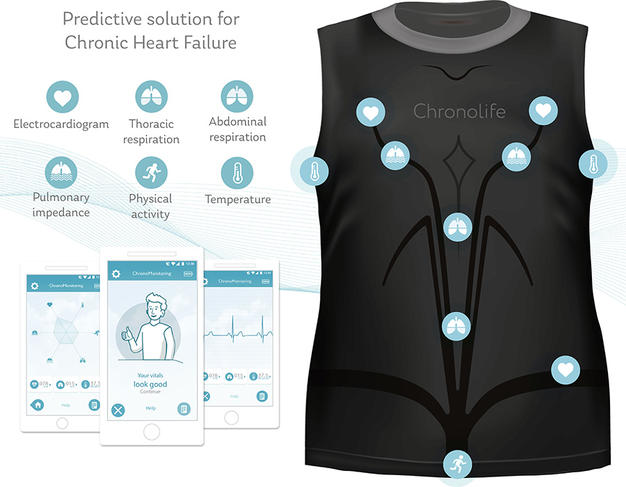 The start-up Chronolife has designed a connected T-shirt which makes it possible to monitor the vital constants of patients with heart failure. 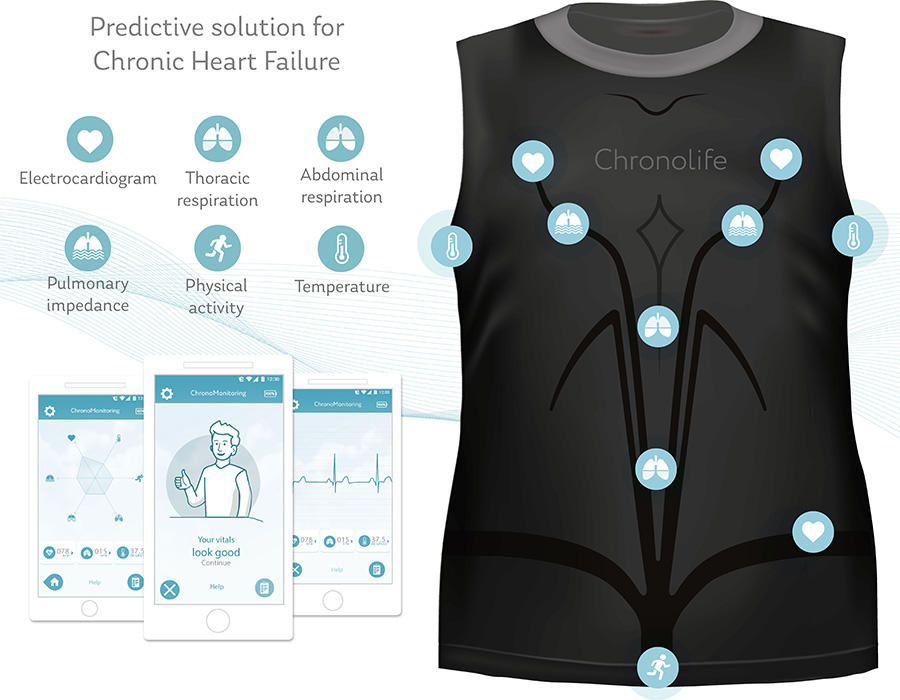 The start-up Chronolife has designed a connected T-shirt which makes it possible to monitor the vital constants of patients with heart failure.
CHRONOLIFE
CHRONOLIFE
Share
Share

Cyber-Detect
The result of ten years of research at the LORIA,2 the analysis technique for malicious codes proposed by the start-up Cyber-Detect, which saw the light of day in 2017, can identify novel attacks as well as camouflage viruses that slip past commonly-used antivirus software programs. It detects malicious codes that do not appear in known virus databases through the "morphological analysis" of the program, which can identify or recognise behaviour that is characteristic of malware.

Cosmian
Cosmian, which was created in 2018 in collaboration with the Computer Science Department of the Ecole Normale Supérieure,3 reconciles data economy—the data of European Union citizens was valued at €60 billion in 2016—and protection. The Internet start-up provides a platform designed to disseminate and use data without compromising it. The technology that makes this possible is based on three components: encryption, connection, and a rules and audit module. The company won the 2019 i-lab competition.

Dilepix
Set up in 2018, Dilepix stems from the IRISA4  and offers technology that uses artificial intelligence to optimise agricultural production. Its technology provides added value to the capacities and autonomy of robots and agricultural equipment through the addition of computer vision and artificial intelligence. It relies on image analysis to monitor crops in order to detect both blossoming and the presence and geographic progression of pests, as well as to assess the ripeness of crops. The start-up won the 2018 i-lab competition. 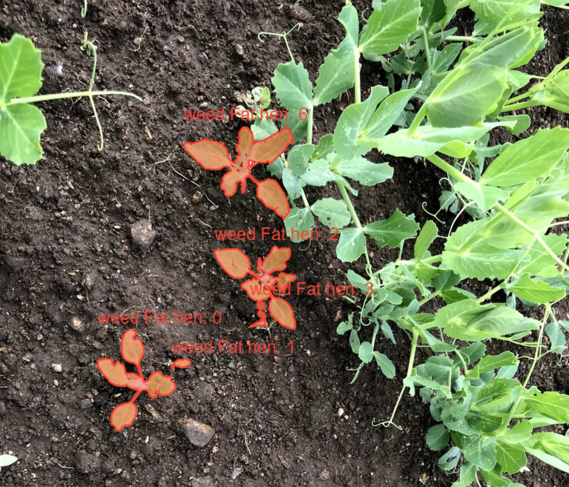 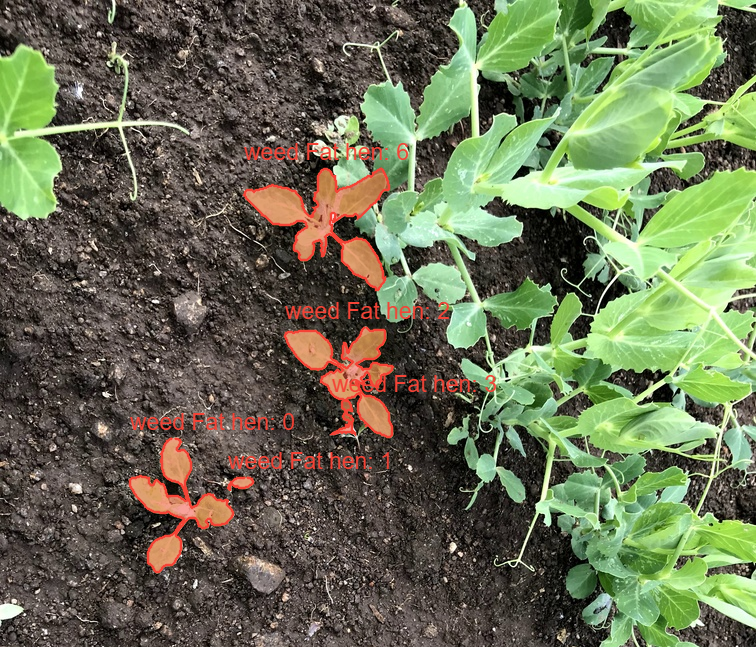 Grapheal
Grapheal specialises in cyberhealth, and has developed technology to assist in the healing of wounds. Launched by the Institut Néel5 in 2019, it has developed a patch that performs continuous monitoring of chronic wounds—those that do not heal after six weeks—which are constantly on the rise due to the ageing of the population. Grapheal’s patch measures and stores the biological parameters of wounds, and then communicates them to health care personnel via medical cloud for remote monitoring of healing.

Icohup
The start-up Icohup, created in 2016 based on research at the ILM,6 specialises in the development of connected instruments to measure pollution. It recently developed the "Rium" system, a 100% digital approach to personal safety in environments exposed to radiation. Relying on the laboratory’s expertise, Icohup offers the cheapest spectrometer on the market to analyse gamma ray types. The box sends data to a mobile application, enabling users to find out which isotopes are present. Remote monitoring is also possible using the Internet. Based in Lyon and Limoges, the start-up presented Rium in Las Vegas in 2017, 2018, and 2019, and was awarded a CES Innovation Award. 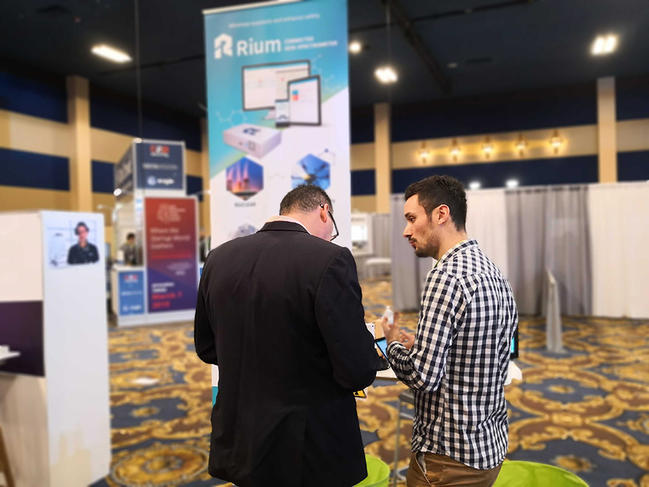 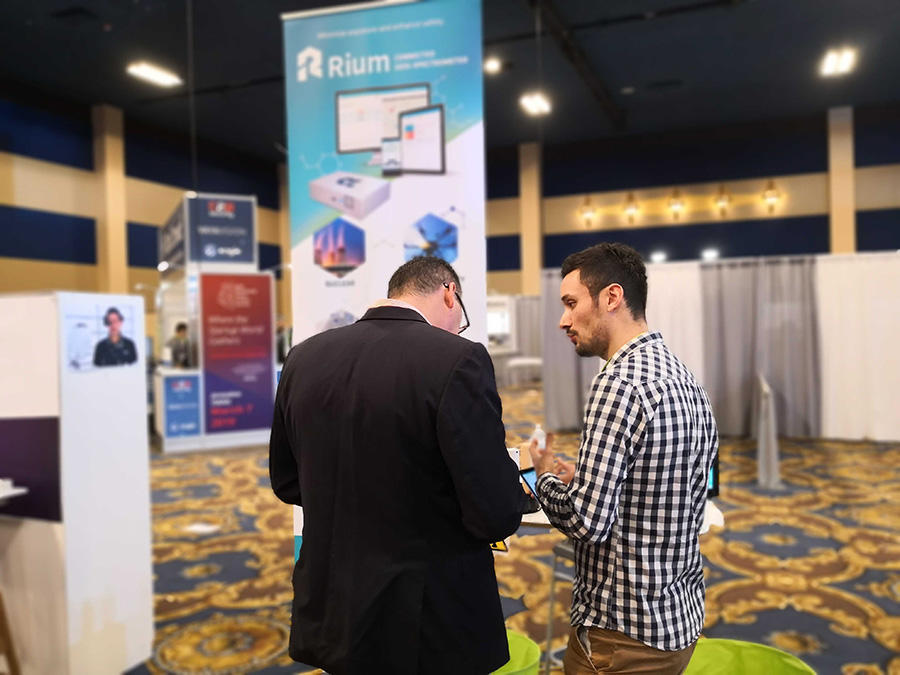 Lituus
The start-up Lituus, which was set up by the IRCICA7 in 2018, has designed the first connected collar to assess the welfare of bovines. It provides farmers with real-time information regarding the reproductive cycles or health problems of their herds, in an effort to optimise agricultural productivity and save time. Using connected objects to evaluate animal welfare is a novel functionality, and a patent for the Lituus device has therefore been filed. 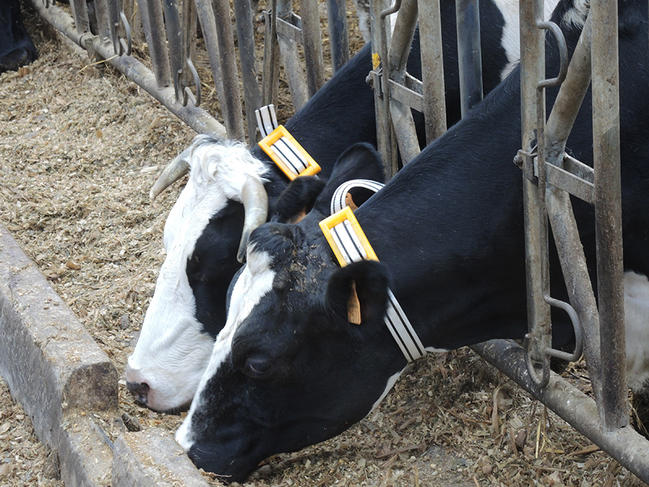 The LITUUS start-up has created a connected collar to assess the welfare of cattle and optimize agricultural yield. 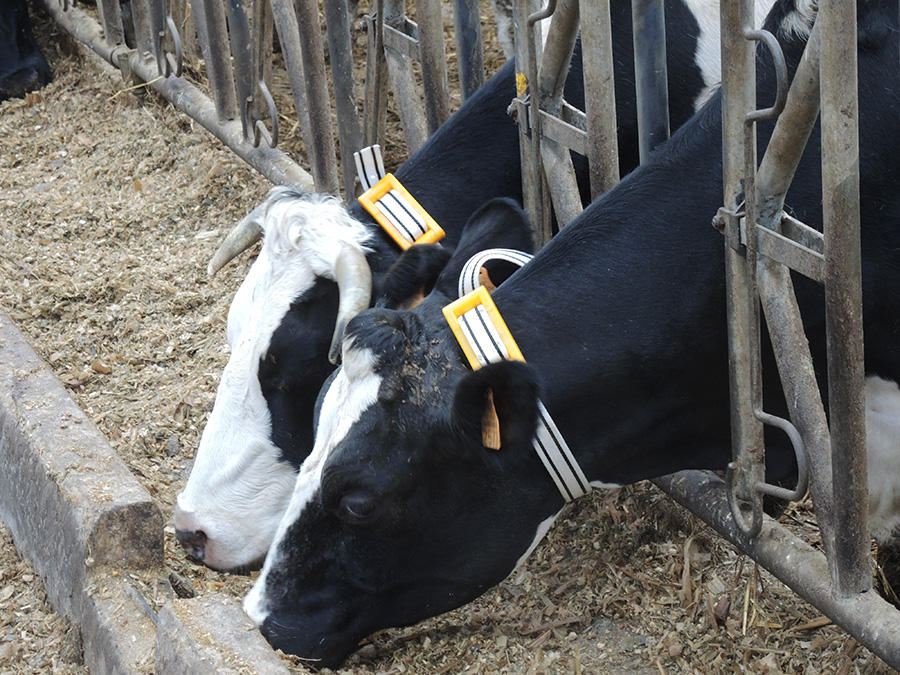 The LITUUS start-up has created a connected collar to assess the welfare of cattle and optimize agricultural yield.
LITUUS
LITUUS
Share
Share

Nextmind
Created in 2017 based on research carried out the LSCP,8 NextMind specialises in neurotechnologies that generate thought-based commands, and offers a device for decoding neural activity. It is the first non-invasive portable device for detecting brain waves that can instantaneously translate brain signals from the user's visual cortex into digital commands. These signals can facilitate interaction and control of digital interfaces, such as computers or headsets for virtual or augmented reality. 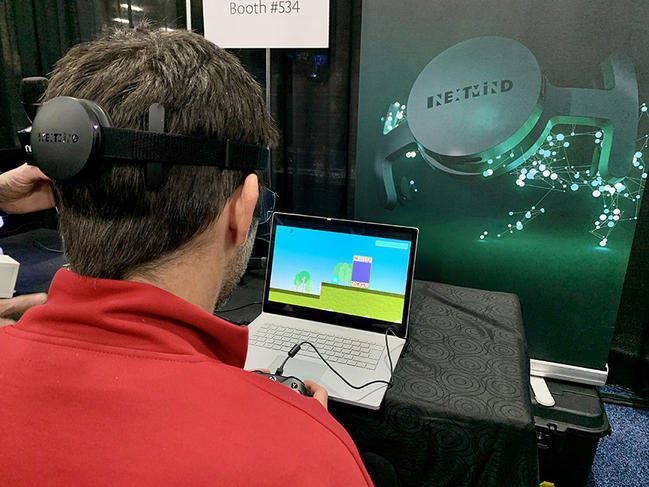 NextMind, a French Start-Up, exhibits its headset able to decode brainwaves and translate the user’s intention on the screen. It was unveiled at an event at the 2020 Consumer Electronics Show (CES) in Las Vegas, Nevada, on January 5, 2020. 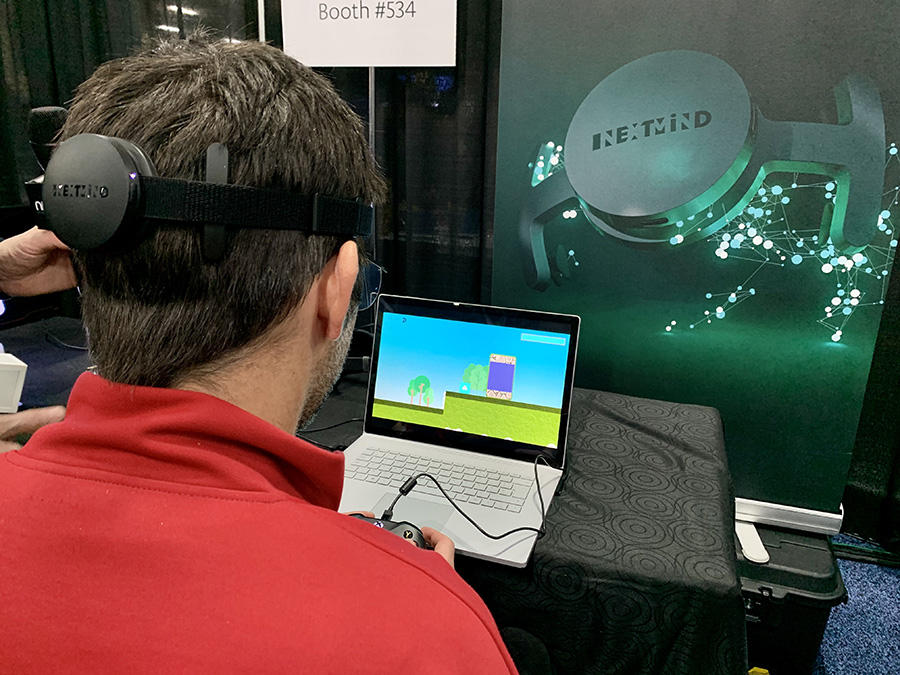 NextMind, a French Start-Up, exhibits its headset able to decode brainwaves and translate the user’s intention on the screen. It was unveiled at an event at the 2020 Consumer Electronics Show (CES) in Las Vegas, Nevada, on January 5, 2020.
Julie JAMMOT / AFP
Julie JAMMOT / AFP
Share
Share

Wisebatt
Stemming from the LIP6 laboratory,9 the start-up Wisebatt was launched in 2016. It provides a simulation tool that enables electronics engineers to obtain, within minutes, the same results as conventional methods in terms of a device’s autonomy, performance and final cost. Users of the platform rely on the visual interface to assemble components and state blocks, thereby achieving a detailed description of the electronic device’s hardware and software, which is interpreted to simulate a behaviour that is 90% similar to that of a real prototype.