Moving walkway installed at the Office nationale des recherches industrielles et des inventions, Bellevue. Gelatin silver bromide on glass plate, CNRS.
Fonds historique / CNRS Photothèque
Share
Share
In Paris, traffic problems are nothing new, as people were already trying to find solutions to help ease the flow during the 1920s. Evidence of this can be found in images from a project for a moving walkway planned for the Parisian underground.

"There's a traffic jam"...The traffic nightmare in Paris is far from a recent development, as pointed out by the magazine La Nature in 1925: "Since the sixteenth century and even earlier, Parisian city authorities have sought unsuccessfully to facilitate the flow of traffic in the City of Light." In 1920s Paris, public transportation was not enough to meet the capital's constantly increasing needs. An innovative solution for easing congestion was imagined at the time, namely transforming the underground of the City of Light into a network of subterranean moving walkways.

It was in this context that the City of Paris established a competition in July 1921: "a continuously moving mechanical system for quickly conveying people through the main streets of Paris." Since it sought to "decongest Parisian surface traffic," this mechanical system firstly had to be underground. With the help of the father of the Paris metro system, Fulgence Bienvenüe, the Office des inventions was tasked with examining the projects. Of the 38 proposals from engineers, 25 were eliminated outright and 13 were examined. The expert report by Mr. Ott, the head engineer of the Paris metro's technical service, left just two projects on the list. 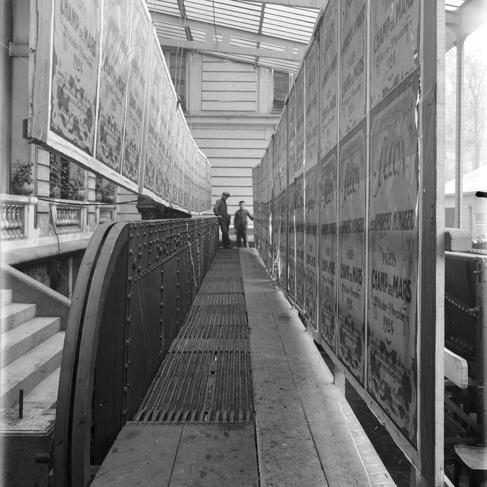 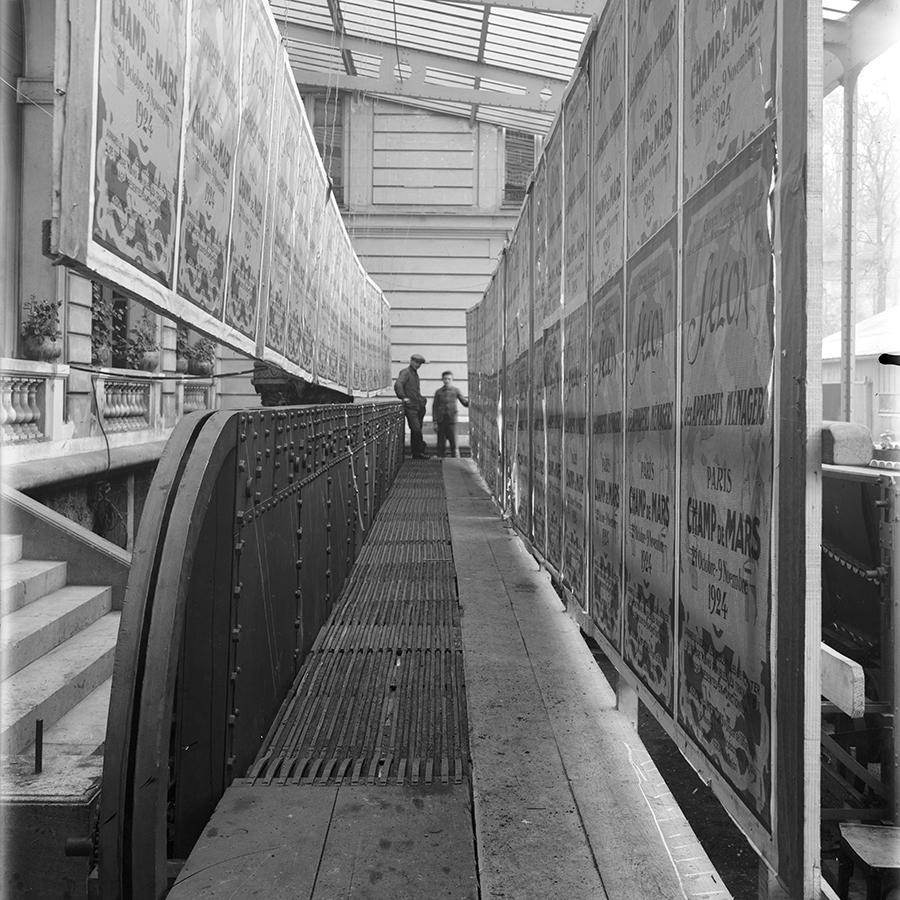 Two prototypes of moving walkways, operating between 12 and 15 kilometres/hour, were finally built and tested at the site of the Office nationale de recherche scientifique et industrielle et des inventions (ONRSII) in Meudon (Bellevue). The first system, called "arbres cannelés" (ribbed shafts), used "parallel bands at graded speeds," similar to the platforms that operated at the World's Columbian Exposition in Chicago (1892) and the Exposition Universelle in Paris (1900). The second was a system using "belts" and "single direction of traffic": it operated in stations and was equipped with special devices for loading and unloading passengers. It was equipped with a starter and a decelerator for transitioning by stages up to the speed of 15 km/h.

These machines had an hourly rate of approximately 70-72,000 passengers, whereas a bus at the time could transport just 1,000 passengers, and the metro 12,000. The numbers were encouraging, and the city began to dream of an underground network of moving walkways.

There were plans to equip the Grands Boulevards, to connect the Madeleine to the place de la République, as well as to shorten the distance between race tracks, from the bois de Boulogne to Longchamp and Auteuil... There were also plans to decongest the major thoroughfares of the city, and to equip heavily-used or poorly-serviced metro routes.

The doctor Jean Comandon, who at the time was the manager of the photographic and cinematographic service of the Office nationale de Recherche Scientifique et industrielle et des inventions (ONRSII) (National Office for Scientific and Industrial Research and Inventions), produced two films, including a presentation of the moving walkway, and a psychophysiological study on the use of the moving walkway, which would serve as a basis for a scientific study. Concerned about whether such a system would agree with the aptitudes of the human body, the director of ONRSII, Jules-Louis Breton, tasked professor Henri Piéron, the chair for the physiology of sensations at the Collège de France, with conducting a "Psychophysiological study of accelerator systems for accessing a moving walkway."

The report by the Collège de France professor was the subject of a communication from the Académie des sciences entitled: "On the time delay of balancing reactions for sudden longitudinal accelerations." According to the specialist, the problems connected to using the moving walkway were of two orders: "the general effect of accelerations on the organism," and "the limits of acceleration compatible with preserving balance."

Assisted by the deputy director and the assistant from the Sorbonne's Laboratoire de psychophysiologie, professor Piéron used a dual-armband oscillometer to conduct blood pressure tests before and just after riding on the machine. The results led him to conclude that the general action of the moving walkway's accelerations were physiologically negligible.

With regard to "Balance," the health risks were lower, for as he explained, if "an individual steps onto an accelerating machine without training, he will experience a passive oscillation through inertia; under the influence of the labyrinthine reception of the acceleration and the kinaesthetic perception of the oscillation experienced, a series of compensating reflexes will be produced."

This Paris of underground moving walkways of course remained the stuff of dreams, even though some of them saw the light of day, such as the one in the gare Montparnasse or in Chatelet-Les Halles. As was often the case in the history of the major innovations supported by the Office, feasibility, which first and foremost means a project's production cost, could discourage the administration (digging the network, ventilation, electrification, motorisation). In the case of moving walkways, the problem of their constant maintenance was also a dissuading factor.

——————————
Visit
La saga des inventions. Du masque à gaz à la machine à laver, les archives du CNRS (The Saga of Inventions: From the Gas Mask to the Washing Machine, the Archives of the CNRS), co-produced by the Rencontres d’Arles and the CNRS, in partnership with the Archives nationales, will be held in l’espace Croisière in Arles from 1 July to 22 September 2019.

Further reading
Inventions 1915-1938, available in bookstores and at the Rencontres d’Arles website.

See author's bio
Make our Planet Great Again: They Chose FrancePrevious
Will the Androids from the Alien Saga Exist in 2093?Next

Article
Feminicide: naming the crime in order to fight it
innovation