Orla/ iStock / Getty Images Plus
Share
Share
Providing an overview of our knowledge of the brain and its illnesses, and describing some of the major challenges for neurosciences over the next twenty years, are the twin ambitions of the collective book Le Cerveau en lumières (Shedding Light on the Brain). An interview with Etienne Hirsch and Bernard Poulain, who coedited the work.

You coedited Le Cerveau en lumières,1 a book that brings together thirty specialists, and that has just been released in bookstores. In what way is the brain the most complex, subtle, and extraordinary of all the organs?
Bernard Poulain:2 Firstly due to the number of components. An adult human brain weighs just 1,400 grams, but contains 100 billion neurons (and four times as many glial cells), which are connected by a few million kilometres of axons (long projections of neurons), as well as a quadrillion synapses. In just a square millimetre of the brain, there are 100,000 neurons, 4 kilometres of axons, and one metre of capillaries! What's probably the most fascinating is less the organ's complexity, which we are getting the measure of each day, than its properties such as the ability to communicate through language, manipulate symbols, or be conscious of oneself and others, all properties that make us human beings.

What fundamental objective does neuroscience pursue?
Étienne Hirsch:3 What drives us is the ambition to study the organization and functioning of the nervous system, including the sense organs. We seek to understand, among other things, how the brain regulates our physiology, makes decisions at every moment, interprets what the sense organs perceive, and learns, in addition to how this highly plastic organ remodels itself throughout life and fails to function properly. However, brain research is not solely the domain of biological and cognitive neuroscience, but includes other disciplines such as physics, chemistry, applied mathematics, computer science, robotics, ethology, the Humanities and social sciences... It is research that is interdisciplinary by essence. 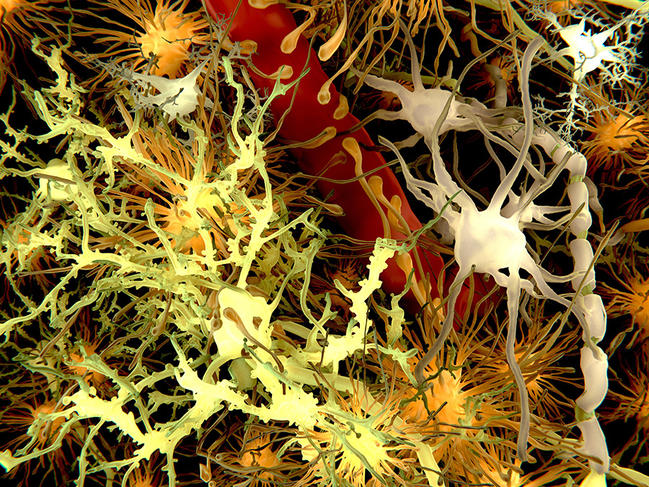 This digital representation of brain cells provides a glimpse into their abundance and diversity: 100 billion neurons (in yellow), four times as many glial cells, including astrocytes (in orange) and oligodendroctyes (in grey). 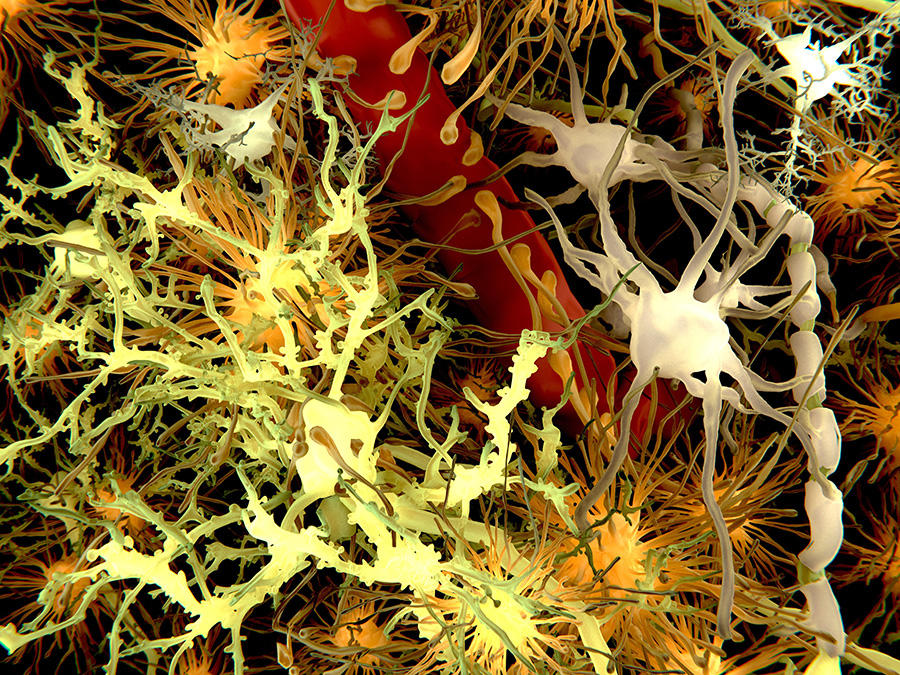 This digital representation of brain cells provides a glimpse into their abundance and diversity: 100 billion neurons (in yellow), four times as many glial cells, including astrocytes (in orange) and oligodendroctyes (in grey).
SPL/BSIP
SPL/BSIP
Share
Share

Which branches of neuroscience have made the greatest advances in recent years?
B.P.: Our knowledge of the molecular mechanisms at work during the transfer of information between synapses has reached an unrivalled degree of refinement. We also know a great deal more about the striking variability in the functioning of neurons and synapses, which is linked to the different expression of many genes. Moreover, it appears that the constant remodelling of the brain is present at every level of its organization, from the synapse to the entire cortex, and across temporalities ranging from the millisecond to the approximately twenty-five years needed for its construction and development. Finally, the way in which we understand the mechanisms of memory and learning has been revolutionized. We now know that learning is not about stacking books on a shelf or storing information in pre-existing circuits, but rather the construction of new synaptic connections and the modelling of neural circuits.

Have the development of imaging methods (magnetic resonance imaging, positron emission tomography, magnetoencephalography, confocal microscopy, biphotons...) also contributed to a better understanding of the brain?
B.P.: The explosion of these technologies has made it possible to study the brain on various spatial and temporal scales, from the single cell to the neural network, and from the millisecond to the lifespan. We can even see the activation of large networks, and identify the areas involved in performing cognitive tasks (decision making, memory...). In other words, we can observe the human brain in action without opening it, something that was inconceivable just a few decades ago. 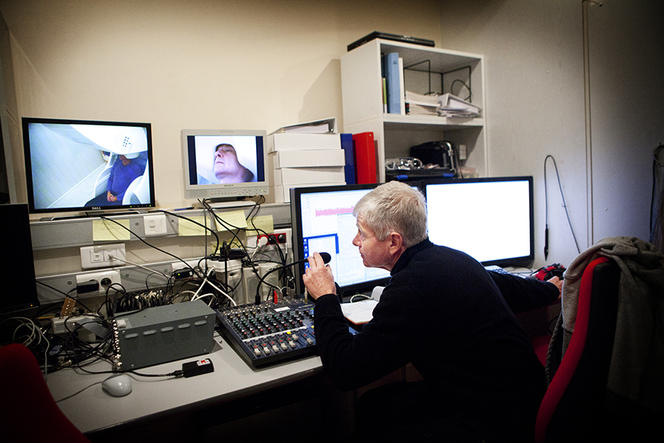 Progress in imaging has helped deepen our knowledge of the brain. For example, magnetoencephalography, which detects variations in the magnetic fields of different cerebral activities, is used to study the normal and abnormal functioning of the brain. 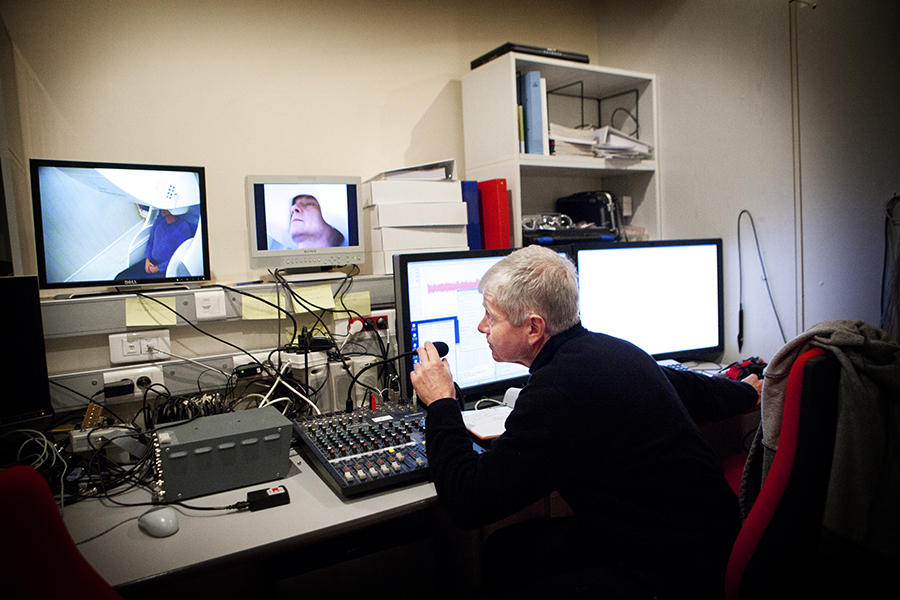 Did the sequencing of the human genome provide essential information on the links between genetic mutations and neurological or psychiatric pathologies?
E.H.: Over the last two decades, the development of sequencing has shed light on a number of rare neurodegenerative diseases such as Huntington's disease, which is characterized by a gradual degeneration of certain neurons, as well as rare forms of common illnesses (Parkinson's disease, Alzheimer's disease, epilepsy...). It has also helped to identify genetic mutations associated with schizophrenia and certain forms of autism, which invalidated the idea that this psychiatric disorder was a childhood psychosis arising from a poor relation between the mother and her newborn. More largely, the principle of a continuum between neurological and psychiatric pathologies, many of which are based on a biological substrate, has been established. 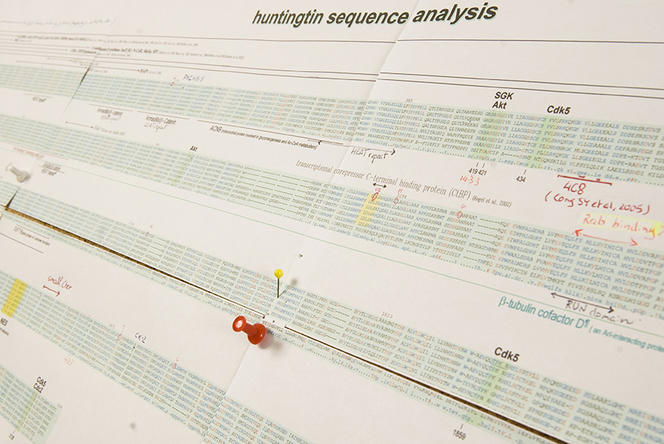 The causes of certain neurodegenerative diseases such as Huntington's were identified thanks to the sequencing of the genome in particular. 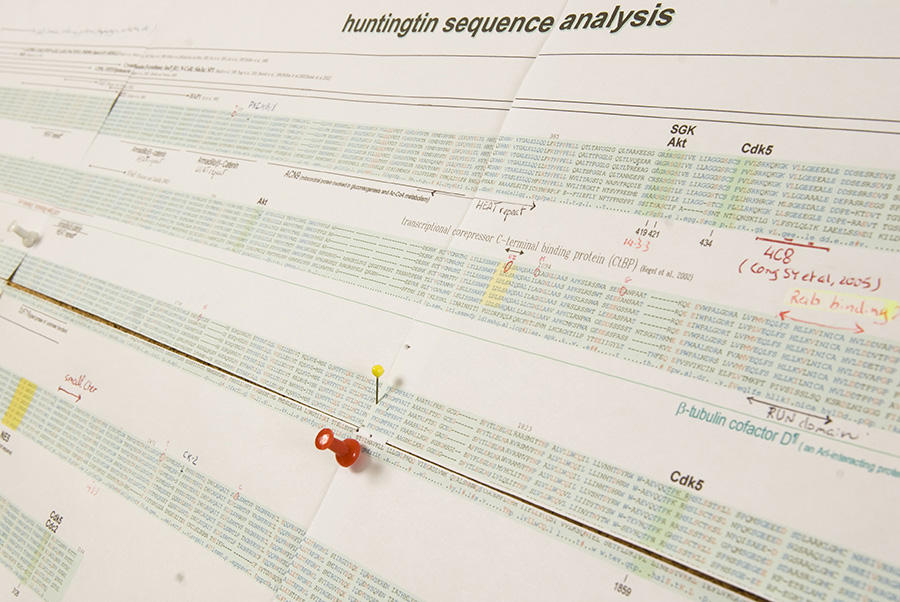 What are the major challenges for neuroscience in the years ahead?
B.P.: One of the major challenges is to map and characterize the brain's wiring in order to establish what is called its "anatomical and functional connectome" (which neurons are connected to each other, and to do what at a given moment?). A related challenge is to decipher "neural code," which is to say the internal language of the brain. In addition to fundamental and clinical impact, the decoding of the algorithms used by the brain to process information should open the way for new brain-machine interfaces, and promote the emergence of neuro-inspired computer science and robotics. A more refined elucidation of the mechanisms for the development and aging of the nervous system remains to be completed, as do the ways in which its functioning depends on other physiological systems (immune, endocrine, gastrointestinal...), the social and ecological environment, etc.

What progress can we expect with regard to imaging?
E.H.: The miniaturisation of imaging tools will make it possible to visualize the brain activity of an animal or human subject in its usual environment, whereas experiments currently take place in highly controlled spaces that hardly offer the complexity of the natural environment. And the identification of new specific biomarkers of a pathological mechanism, such as the alterations of substantia nigra neurons (a structure located in the brain stem) that is at the origin of the motor symptoms of Parkinson's disease (slowness, rigidity, resting tremor), will foster the earlier detection of an illness, and will ensure more accurate monitoring and evolution of treatment.

Can some blind people hope to see again in the near future?
B.P.: Most certainly! We are on the verge of offering individuals suffering from age-related macular degeneration (ARMD) or pigmentary retinopathy the ability to recover sight through retinal implants. This possibility is intended for blind persons whose photoreceptors (cells that detect light signals, transform them into electrical signals, and stimulate neurons that relay the messages to the brain via the optic nerve) have degenerated, but whose nervous cells in the retina and optic nerve remain functional. Optogenetics, which allows us to control small populations of neurons by turning them "on" or "off" using light, should also prove to be an invaluable tool in restoring vision. With regard to brain diseases, the use of non-medicinal therapies (virtual reality, brain games) should be confirmed and developed. The goal is to attenuate the symptoms of certain diseases and to increase the autonomy of patients, for example in cases of Alzheimer's disease. 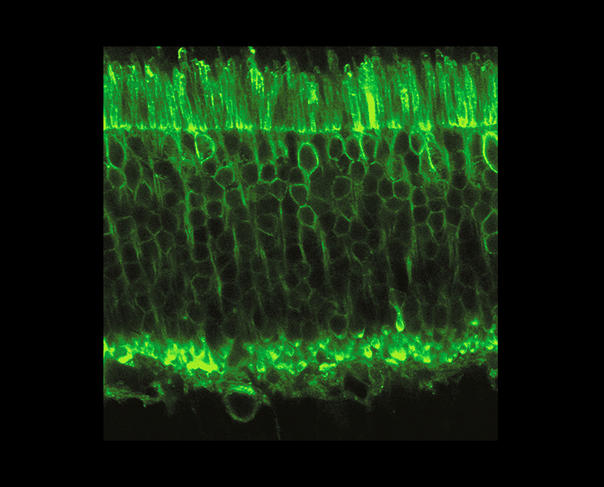 Optogenetics, a technique that can control small populations of neurons by turning them "on" or "off" using light (used here on the photoreceptors of mice), should also prove to be an invaluable tool in restoring vision. 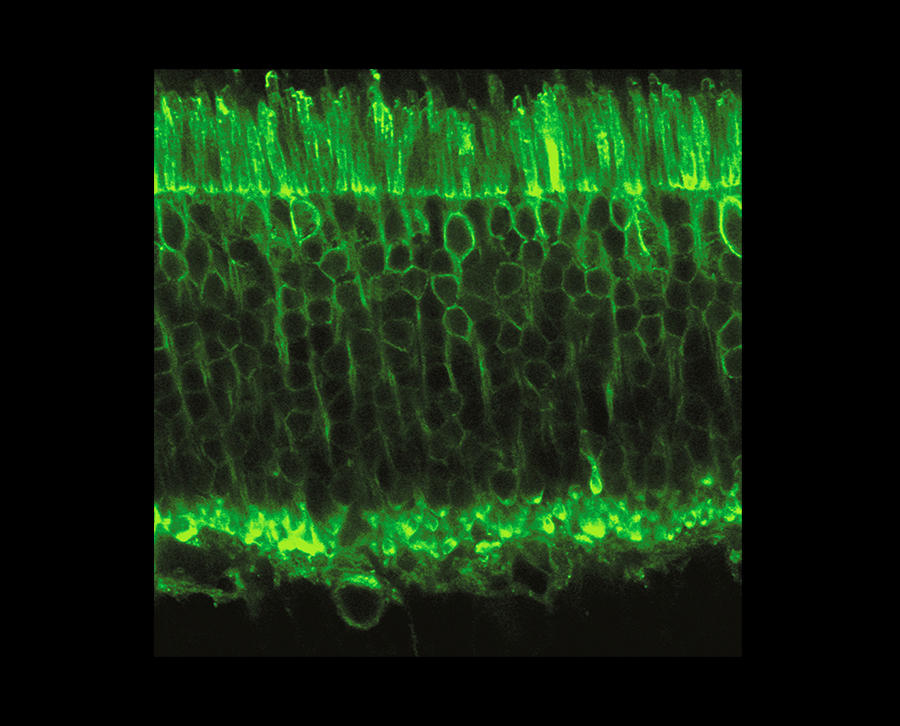 Despite all of these promises, does progress in neuroscience not risk opening Pandora's box?
E.H.: It's a genuine fear. The better we understand the inner neurophysiological workings that make human beings a more or less rational creature, the more we can dread a distortion of this knowledge for commercial or manipulative purposes. That is why ethical requirements must both ground and oversee brain research. It is high time to integrate research on and about neuroethics within the educational curriculum for future neuroscientists.

In this work you also sound the alarm regarding financing for brain research in your country. Is the situation that critical?
B.P.: The numbers prove it. The direct and indirect costs of brain pathologies are around 100 billion euros per year in France (or 11.4 million euros per hour), and this burden will only grow due to increased life expectancy. In the field of neurodegenerative diseases, whose annual burden is 18 billion euros, the government only spends 14.2 million euros per year for research projects (aside from the payroll costs of staff with a permanent position, with the number reaching 135 million euros when including it). Annual financing for mental health and psychiatric research represents approximately 20 million euros (including the payroll costs of researchers), with spending hovering around 50 billion per year. Investing in fundamental research on the brain, in addition to research on neurological and psychiatric illnesses as well as sense organs, is not an unrecoverable expense. It is the only investment that can reduce the phenomenal costs generated by these pathologies (treatments, missed work...), and can increase the quality of life of both patients and caregivers.

See author's bio
Computers: Promises of the Quantum DawnPrevious
The Framework of Notre-Dame: Putting an End to StereotypesNext

Article
A New Diet to Slow Down Alzheimer’s Disease?
Brain