Chinnapong/Stock.Adobe.com
Share
Share
By considering criteria other than purely biological or medical, such as language ability, social background, and gender, hospital practitioners and scientists have developed strategies for improving the treatment of patients who have suffered a cerebrovascular accident (CVA), or stroke.

In 2011, when Nicole Guinel was a speech therapist in the team of Sonia Alamowitch at Tenon-APHP hospital in Paris, a Polish patient was admitted who was suffering from complete mutism after a stroke. "Aphasia, or the partial or total loss of language, is a frequent consequence of strokes," the researcher explains. "For that reason, we recommend exercises that encourage the recovery of speech." These involve pronouncing words or expressions that are adapted to a particular context – "hello", "thank you", "it is Monday" – in addition to naming everyday objects and singing nursery rhymes. This training must begin as early as possible for optimal efficiency. Its success also depends on the state of the victim, the severity of the accident, as well as their background or the course of their life. "Faced with this Polish patient, who had arrived in France two months earlier and didn't speak a word of French, I was once again confronted with the fact that our solutions were not adapted to non-French speakers."

Acting as quickly as possible

Fortunately, the patient was accompanied by a bilingual colleague, who improvised as a translator. Guinel made sure to record the exchanges on tape, so she could use them later with other Polish or non-French speaking patients as needed. "Thinking about it again the next day, I said to myself we should be able to do that systematically. I began recording bilingual colleagues who speak Arabic or African languages. However, my work did not go beyond my unit, and I didn't know how to disseminate this data." Marion Dupuis provided the answer. A scientific mediation officer at the CRAL,1 she imagined a digital platform that centralises and shares recordings with a large audience. "At first we planned on a reserved access model," Dupuis points out. "Ultimately we found it simpler and more useful to create a public, open access website on the platform hypotheses.org." Collecting enough recordings takes time, especially as the audio files must be processed, corrected, and harmonised. In the meantime, Guinel was transferred to a new department at Saint-Antoine-APHP hospital, also in Paris. Her project still enjoyed the support of her former department head Pr. Alamowitch, who was now responsible for the entire neurology ward (vascular and general). 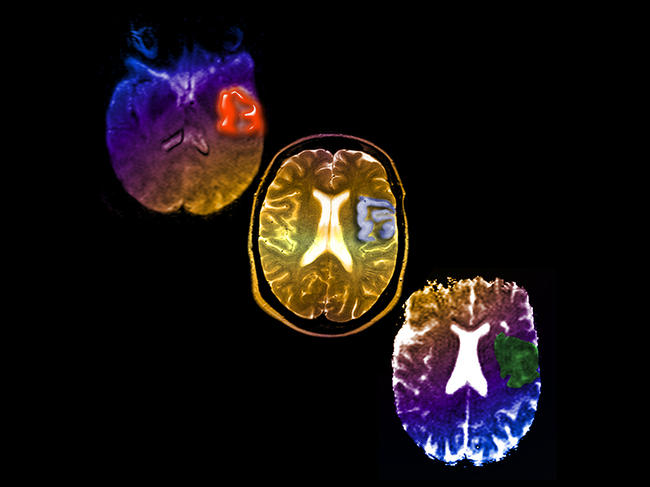 This set of colour-enhanced composite images from an MRI scan shows an acute stroke in the vascular territory of the left middle cerebral artery. 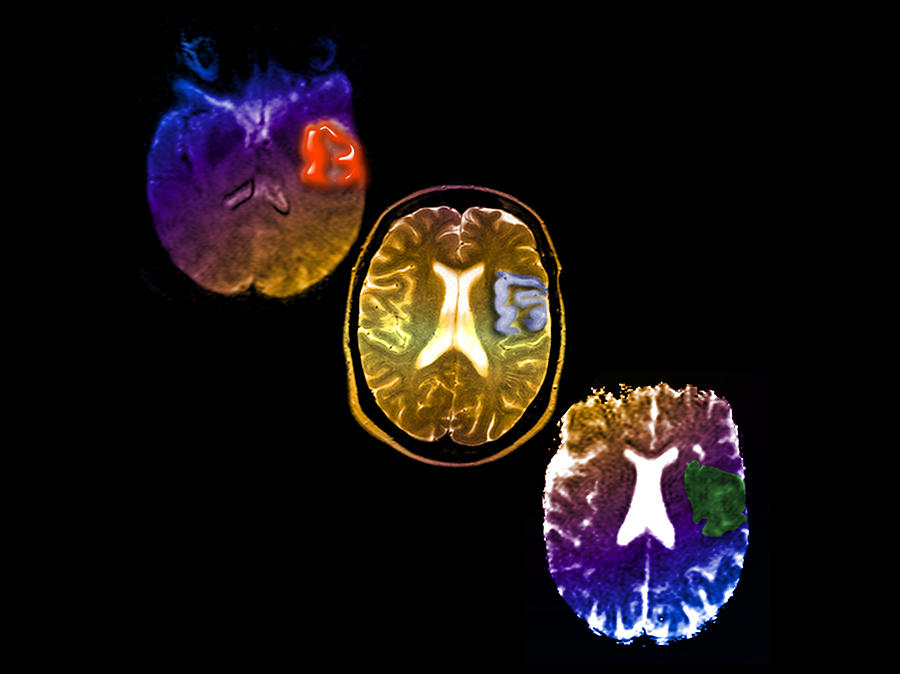 The site Tradaphasia finally became available online in 2017. It offers a series of exercises translated from French into sixteen other languages. "Today we count about fifty," enthuses Dupuis, adding that an English version, Aphasia Translate,  has been accessible since 2019. Speech therapists from across the world, of both French and English mother tongue, can use the recordings to work with individuals who cannot speak (or speak well) the language of the country where they are hospitalised. The service is especially popular in intensive care units where stroke patients are treated, for there is heightened awareness that their recovery depends on such linguistic factors. Guinel relied, for example, on the research conducted in language sciences by Barbara Köpke. During the 2000s, this specialist on bilingualism and aphasia showed that evaluation tests and rehabilitation exercises remained too centred on what has been called the majority language, i.e. that spoken in the hospital. Even the protocols including interpreters or mediators pose problems, for they are difficult to implement during the initial phases of hospitalisation: too much time is lost trying to find someone and wait for them to arrive, as more serious consequences can set in during that interval. Tradaphasia, on the other hand, enables speech therapists to work with the patient from the very first hours, thereby facilitating recovery.

"Good students" at an advantage

Aside from command of the language, other factors that are not directly medical can also come into play. In a recent study published in the journal Qualitative Sociology, the sociologist Muriel Darmon, of the CESSP,2 demonstrates that stroke victims from the working classes do not recover as well as those from the middle and upper classes, even when the intensity of the accident appears equivalent at the outset. "During the fifteen months I spent in neurology and rehabilitation units, I noticed that the tests and exercises favoured a public that one could call ‘academic’," Darmon says. Concretely, to stimulate a patient's cognitive and linguistic skills, professionals can ask them to describe on paper how they would do their shopping while considering certain constraints, such as making the most of the occasion to take a package to the post office or pick up an official document. The idea is to call upon their organisation and planning abilities, for instance by dropping off the package before shopping so as to avoid carrying it for too long. 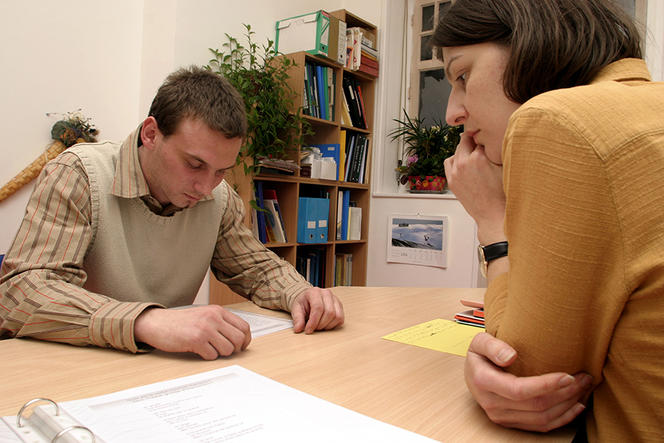 Aphasia rehabilitation exercises after a stroke in a speech therapy practice. 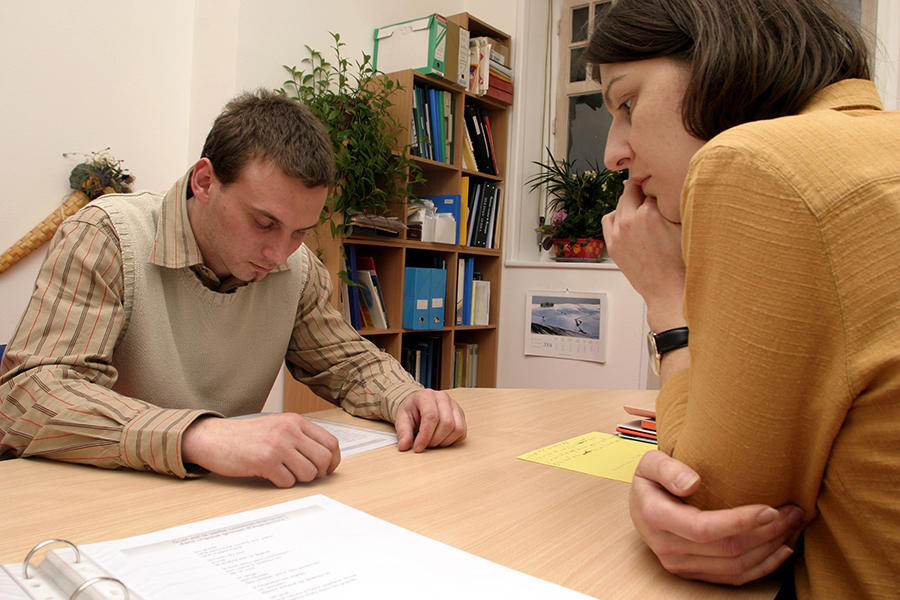 While not necessarily complex, the appropriate strategy is… to think of a strategy! Rigorously planning a nonetheless ordinary task is "a way of thinking that is not necessarily prevalent", Darmon points out. "Writing a simple list – of things to do, for example – is a habit that is characteristic of the middle classes." Conversely, for less educated or working-class patients, the behaviour expected in the shopping exercise can seem remote, and even foreign. "Many spontaneously respond: 'well I take my car and go, and then I figure it out on the spot'." Another test involves reacting to an absurd statement, for instance a wedding invitation that notifies the event "with sadness". "I had a worker from Morocco who did not understand what was expected of him, for he was totally unfamiliar with this type of practice." Marriage announcements in newspapers, once again, are more frequent among the middle and upper classes. "In the end, speech therapy exercises are less adapted to the most socially-disadvantaged, despite the fact that they are more prone to strokes, due to the greater incidence of conditions such as hypertension, diabetes, obesity, etc. among these populations," Darmon laments.

Sociology of the biological

This is not the only inequality. Women, for example, come out worse, even when considering factors such as CVA severity, age, general state of health, etc. "Biological explanations are put forward, but environmental, economic, and social causes are increasingly being taken into account," points out Darmon, who is preparing a more general book on the sociology of post-stroke loss and recovery (forthcoming from the publisher La Découverte in early 2021). During her immersion in hospitals and intensive care units, she observed that different abilities were emphasised depending on the patient's gender. "For example, if a man can no longer drive, there will be greater understanding and effort to enable him to do so again." In the case of a woman, hospital staff, the family, or even the patient herself will more easily believe that it is perhaps not so important. "She may instead want or be encouraged to cook, or take care of her children."

The way in which stroke patients are treated, evaluated, and provided therapy does not escape this gender bias. "As with social class, it is not so much a question of individual will – that of medical staff or the patients themselves – as an institutional and social system that prevails despite those concerned," stresses Darmon. More generally, it is increasingly clear that human bodies do not depend solely on biological factors – genetic for example – but also on economic, social, and environmental processes that trigger physiological and sometimes pathological tendencies in certain social groups rather than others. In the future, the development of approaches such as the sociology of the biological could allow for improved treatment, not just for stroke sufferers but for all patients and victims of accidents.