If no treatment for Alzheimer's disease currently exists, helping patients cope is essential to curb its development (here a patient with her daughter in Zurich).
URSULA MARKUS/BSIP
Share
Share
With more than 200,000 new cases each year in France, Alzheimer's is the most common neurodegenerative disease. CNRS News reviews recent advances in terms of treatment and diagnosis.

Alzheimer's disease arouses fears of a loss of self-identity and social existence, and affects more than 5% of those over the age of 65, or nearly a million individuals in France. "Not to mention their carers! A patient is often supported by two or three people," explains Martine Bungener, an economist and sociologist who, as a CNRS senior researcher emeritus, has been working closely with sufferers for many years.

Although a treatment for Alzheimer's disease has not yet been found, research in this field has attracted increasing attention and funding, as well as made considerable progress. Since 2007, this condition has been completely redefined, thanks to the introduction of a precise framework for its identification. "This opened up entirely new perspectives, and took us out of the Dark Ages," summarizes the neurologist Bruno Dubois, who heads the CMRR1 at the Pitié-Salpêtrière hospital in Paris, and was involved, with his team, in revising the definition of the disease.

Welcome to the modern era!

Only fifteen years ago, a diagnosis of Alzheimer's could be confused with that of other types of dementia. "We thought it was a highly heterogeneous disease, but that is not the case at all!" explains Dubois. Its clinical criteria are now clearly defined. For example, the disease first affects the hippocampus, causing an amnesic syndrome which then spreads to the cerebral cortex.

Alzheimer's is now defined by three major lesions: neuronal loss, an accumulation of beta-amyloid peptides (which form amyloid plaques) and finally the clumping of tau proteins, which cause neurofibrillary degeneration. "This modern framework has changed everything," explains Dubois, pointing out that before then, diagnoses were incorrect in as many as 35% of cases.

Significant research efforts have focused on the mechanisms that give rise to this condition, which was discovered at the turn of the 20th century by Alois Alzheimer. Ronald Melki, a senior researcher at the Institut des Neurosciences Paris-Saclay,2 also contributed to elucidating the disease. In 2008, he and his team were able to show that the protein aggregates responsible for degeneration could be transmitted from one cell to another, "like an infection." After some time, this propagation accompanied by an amplification spreads to a large part of the brain. "In practice, this is something we are familiar with in the context of prion diseases, such as mad cow disease," he explains. In that case, could Alzheimer's also be contagious? " We have not been able to demonstrate any transmission so far; brain-to-brain contact would be necessary," he believes, which seems highly improbable. 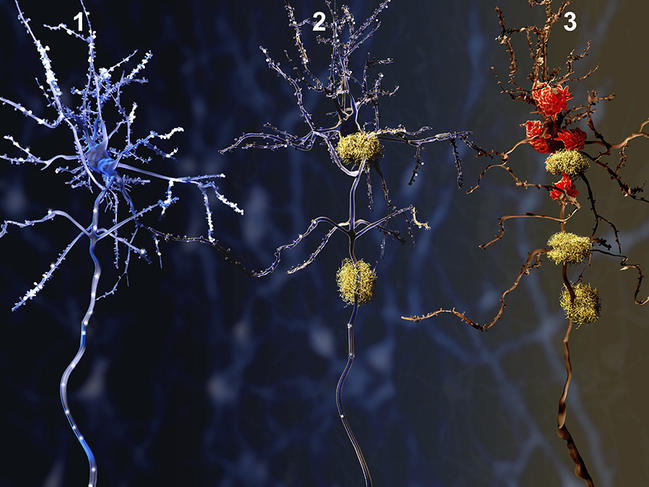 Illustrations of a healthy neuron (1), a neuron loaded with amyloid plaques (2, in yellow) and a dead neuron being digested by microglial cells (3, red). 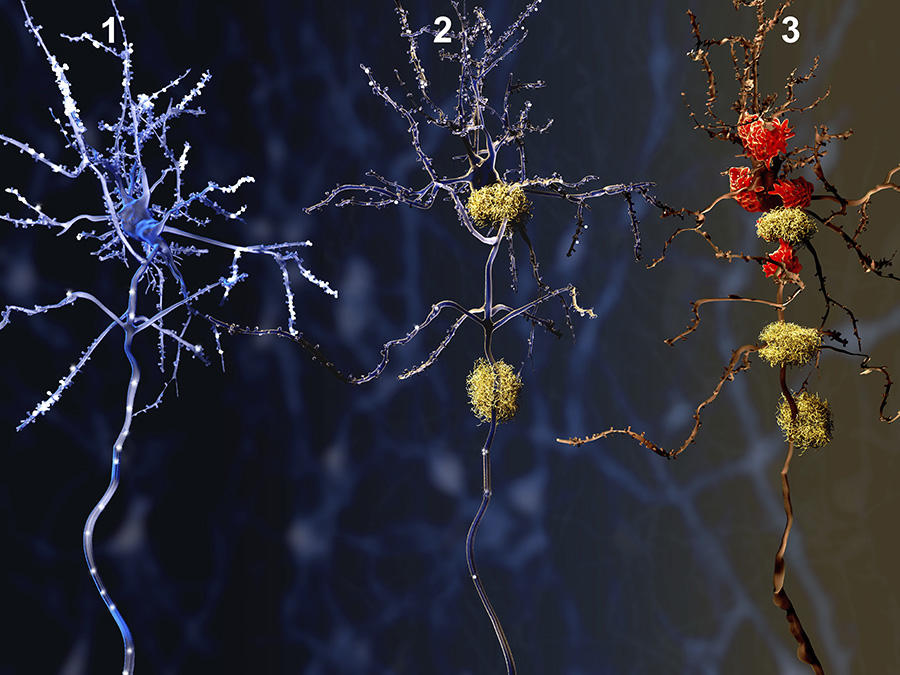 Illustrations of a healthy neuron (1), a neuron loaded with amyloid plaques (2, in yellow) and a dead neuron being digested by microglial cells (3, red).
SPL/BSIP
SPL/BSIP
Share
Share

In addition, except for genetic forms of the disease, "there is no excessive production of amyloid peptides, but a reduction in their degradation due to age-dependent losses," adds Frédéric Checler, senior researcher at the IPMC3 in Nice. Age is therefore a direct cause of neuronal death.

Protein aggregates, changes to the hippocampus, neuronal loss: although these signs are visible, do they help reach a diagnosis? They do indeed, and the past five years have seen a turning point in terms of innovations in this area, notably with the introduction of biological tests. Previously, diagnoses were based on a series of cues, including MRI scans and cognitive tests. "Our results weren't very precise. Our primary aim was to eliminate other conditions, before estimating the probability that a patient had Alzheimer's disease," recalls Dubois. Today, physicians can obtain biological proof while the patients are still alive, from biomarkers that are detected through the analysis of cerebrospinal fluid collected by lumbar puncture. "In an affected patient for example, this fluid will contain abnormally high levels of tau protein. but no amyloid proteins, which, in the case of Alzheimer's, accumulate in the amyloid plaques," explains the neurobiologist Luc Buée, senior researcher at the Centre de Recherche Jean-Pierre-Aubert, in Lille (northern France).

Another advantage of biomarkers—and not the least—is that they can be detected at any stage of the disease, even when it is still silent. "This is a major paradigm shift," assures Dubois. However, detecting Alzheimer's before memory loss or confusion occurs poses some real ethical problems, as no curative treatment can be offered to the patient. "Biomarkers must remain a diagnostic support, when there is a doubt, as in younger people," warns the neurologist. 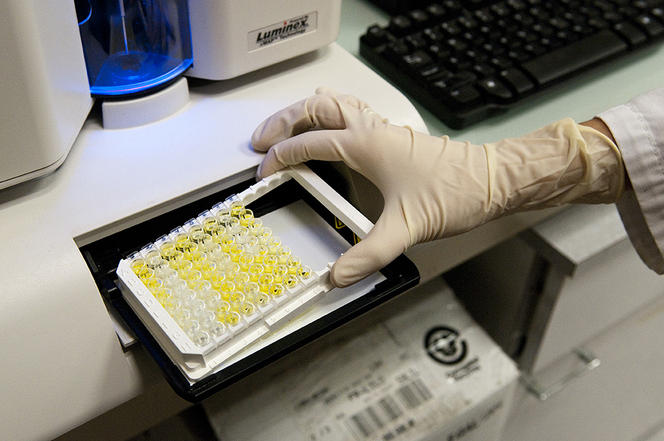 Human plasma and cerebrospinal fluid samples used for correctly dosing beta-amyloid peptides and tau proteins at the Centre de recherche Jean-Pierre-Aubert in Lille (France). Researchers are interested in the mechanism of neuronal death, characterized by the accumulation and aggregation of the tau protein in the brain.

Human plasma and cerebrospinal fluid samples used for correctly dosing beta-amyloid peptides and tau proteins at the Centre de recherche Jean-Pierre-Aubert in Lille (France). Researchers are interested in the mechanism of neuronal death, characterized by the accumulation and aggregation of the tau protein in the brain.
C.FRESILLON/CNRS PHOTOTHEQUE
C.FRESILLON/CNRS PHOTOTHEQUE
Share
Share

In the absence of treatment, and despite advances in research, a diagnosis of the disease always comes as a blow. Bungener relates that this painful time often feels "like an announcement of social death, as if sufferers were suddenly singled out by society." And their first questions tend not to focus on medicine or science, but on the everyday problems they will have to face in the future. "Patients are under the impression that they will soon cease to exist, but they do not want to be stigmatized; they still want the freedom to choose how they will live," insists the sociologist. This is why some carers encourage them to continue cooking, reading or even driving!

"Why me?" This is one of the most frequent questions asked after the announcement of the diagnosis, says Bungener. In some cases, such as the genetic form, the risk factors are clearly identified. "Some very rare genetic mutations can cause the disease, but they only account for 0.3% of all forms of Alzheimer's. These mutations are carried by genes involved in the genesis of amyloid peptides," explains Buée. Furthermore, an unhealthy lifestyle, and the pathologies associated with it such as diabetes or hypertension "can lead to a weakening of the brain, which favors the onset of the disease," he adds.

More unexpectedly, research has just shown that "symptoms very similar to those of Alzheimer's develop in boxers, American footballers or even hockey players," notes the scientist.

The most clearly identified risk factor nevertheless remains age. "Over time, the proteins will aggregate in the brain. And the longer a person lives, the greater the probability of this protein accumulation," Melki points out. Other potential causes have been explored, such as bacterial or viral infection, but findings have so far remained inconclusive. "One of the best ways to prevent the disease is to use the brain, by reading or talking to other people. To this should be added regular physical exercise, which increases the flow of oxygen to the brain and supplies it with nutrients," advises the specialist.

A clearer understanding of the risk factors and lesions of Alzheimer's disease could make it possible to interfere with these mechanisms and develop an effective treatment. Numerous compounds and therapeutic strategies have been tested in recent years, starting with immunotherapy. The idea seemed simple: to create antibodies that would target the amyloid peptide and thus destroy the plaques. "This is what has been referred to as the vaccine approach," explains Buée. But this strategy proved disappointing as it failed to slow down degeneration, despite a clear reduction in the presence of plaques in the brain. "Targeting the plaques and using this as an indicator of success during clinical trials might explain the many failures we experienced," suggests Checler.

Another strategy is to intervene further upstream before plaque formation in order to prevent its initiation. Thus "knowledge regarding the maturation of amyloid peptide precursors may reveal new actors," explains Checler. One particular target is the beta-secretase enzyme, which participates in the formation of amyloid peptides. By blocking it with an inhibitor, the cascade of reactions leading to the disease could be halted. "In humans, this method achieved 70% inhibition," Dubois stresses. Checler is optimistic: "Understanding the mechanisms involved, and how they malfunction, is essential to be able to identify pharmacological opportunities to stop the development of the disease or at least interfere in its progression," he believes. 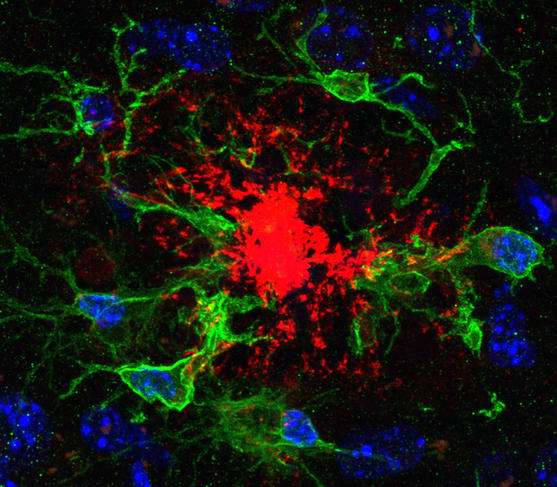 Inflamed microglial cells (in green) encircling an amyloid plaque (in red) in a mouse brain which is developing symptoms of Alzheimer's disease. 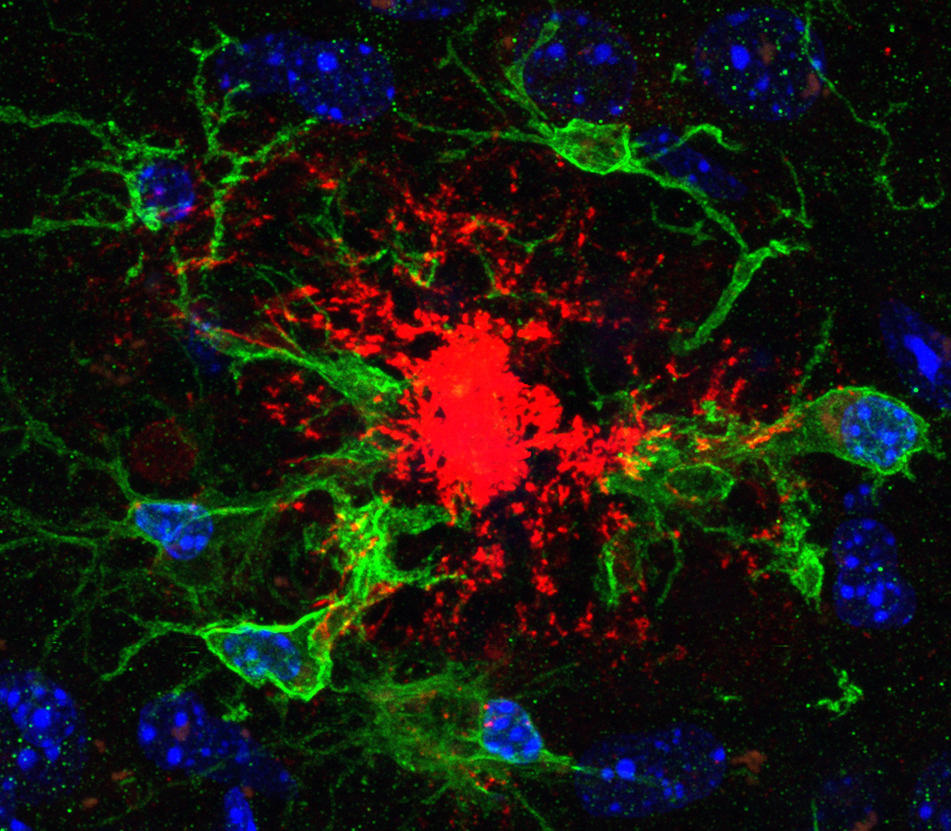 The final option being considered consists in preventing the aggregation of tau, using a compound that would stabilize the protein and prevent it from causing neurofibrillary degeneration. "To achieve this, much work has been done on polyphenols, for example, which are present in green tea, turmeric or even wine," explains Melki. But although fully exploited by industry, these micronutrients are not easily metabolized by the liver.

For the time being, most curative therapeutic options have not lived up to expectations. "Much effort and many hopes have been put into immunotherapy, in particular, with four or five promising compounds that eventually proved insufficiently effective. We are sad for our patients," acknowledges Dubois. "We have been trying to find the right combination for nearly 20 years. In ten to 15 years from now, I am convinced many more options will be available," Melki reckons. "We may not be able to defeat Alzheimer's, but at least its course will be controlled," Checler hopes.

Could the answer lie in patients' everyday lives? Stimulation actually enables them to retain a degree of independence. "Carers and sufferers have demonstrated extraordinary inventiveness, it is really fascinating!" Bungener enthuses. "Carers do not want to deprive those they are in charge of from what was previously important to them, such as cooking meals. And it works! Patients are calmer and less aggressive," she goes on. "We need to remember that their movements may be slower, but that this doesn't matter." The dramatic image of the disease is gradually receding. And physicians are constantly working on how best to announce the diagnosis and provide support for sufferers. "The aim is to help them, while at the same time keeping an eye open for new developments," Bungener sums up.