Home / Articles / A New Window to the Universe

A New Window to the Universe

Home / Articles / A New Window to the Universe

A New Window to the Universe

Simulation of gravitational waves generated by a collision between two black holes.
C. HENZE/NASA/GODDARD SPACE FLIGHT CENTER
Share
Share
The general theory of relativity predicted the existence of gravitational waves, distortions in the fabric of space-time that propagate through the Universe. What exactly are they and how were they detected?

The main objective of the Advanced LIGO project, based in the US and its European counterpart, Advanced VIRGO, is to detect and study gravitational waves, distortions in the fabric of space-time caused by massive bodies, which propagate through the Universe rather like ripples on the surface of a pond.

Gravitational waves were predicted by Albert Einstein shortly after he formulated his general theory of relativity. The theory states that objects curve space-time according to their mass.  A massive rotating body causes the curvature to propagate, just as throwing a stone into a pond produces a wave that gradually spreads out. "In a pond, the amplitude and frequency of the wave depend on the size of the stone," explains Pierre Binétruy from the AstroParticle and Cosmology Laboratory1 in Paris. "In the same way, the characteristics of gravitational waves are partly determined by the mass of the objects that cause them." In theory, human motion also generates gravitational waves, whose amplitude is too small to be measured.

The characteristics of gravitational waves depends in part on the mass of the objects that cause them.

Since they are practically undetectable, such processes have long remained purely theoretical and have been the subject of much controversy. In fact, detectable gravitational waves are only generated by the most violent processes in the Universe. These include supernovae explosions, or binary systems where two compact, massive objects like neutron stars or black holes rapidly orbit around each other, eventually colliding. Primordial gravitational waves are also thought to have been emitted during the phase of rapid expansion of the Universe known as inflation, which is believed to have taken place just after the Big Bang.

"Detecting gravitational waves is a huge challenge for scientists," points out Benoît Mours, from the LAPP Particle Physics Laboratory (Annecy-le-Vieux, France).2 The BICEP2 experiment in 2014 comes as an illustration: a team of scientists based in the South Pole announced that they had observed primordial gravitational waves. Yet it turned out that their measurements in the cosmic microwave background were in fact caused by noise from Galactic dust. 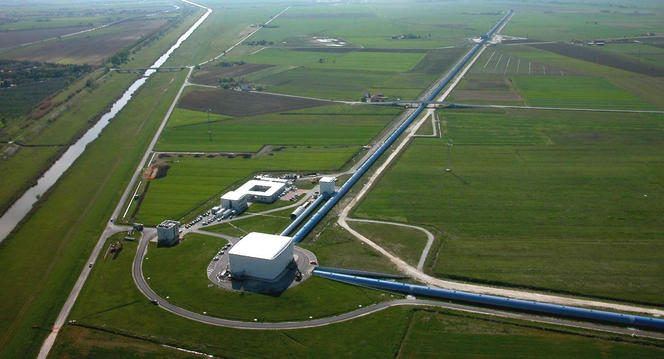 Aerial view of one of the arms of the VIRGO interferometer. 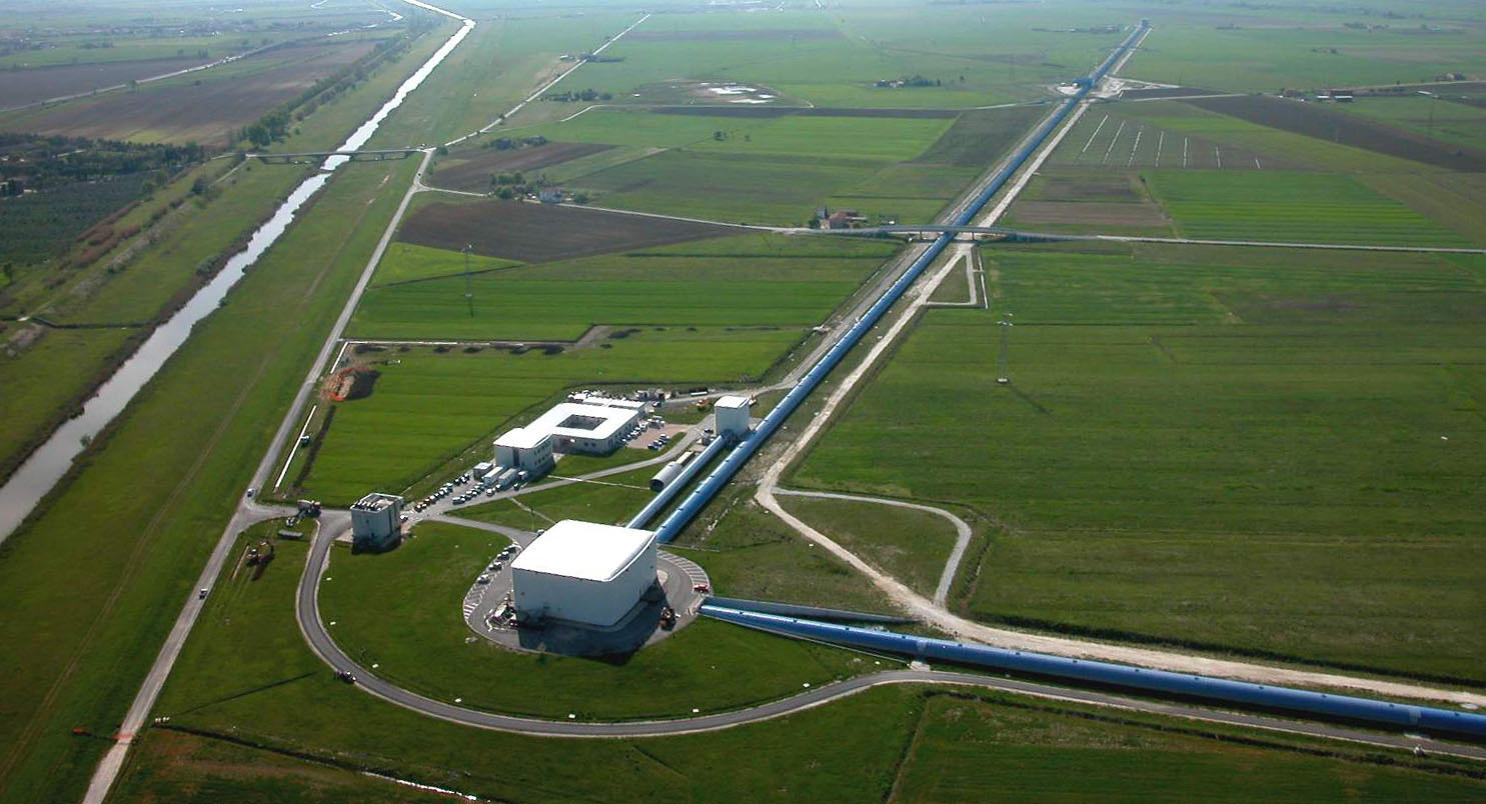 Nonetheless, researchers were still almost certain that gravitational waves did exist. In the 1970s, Russell Hulse and Joseph Taylor studied a binary neutron star system, one of whose stars was a pulsar, which emits a beam of radio waves at regular intervals.  They observed that the rotational frequency of the binary system was increasing, showing that it was losing energy. "Their observations perfectly agreed with theoretical calculations based on the assumption that the energy was being lost due to gravitational radiation," Binétruy explains. "So much so that it was considered to be clear evidence." This discovery earned Hulse and Taylor the Nobel Prize in physics in 1993.

It was around that time that the design phase for the VIRGO and LIGO detectors got underway, with the aim of detecting the distortions in space-time caused by gravitational waves more directly. On the scale of a meter, such distortions result in changes in distance of a mere thousand billion billionth of a meter! VIRGO and LIGO are gigantic interferometers designed to measure such tiny variations.

The principle consists in splitting a laser beam into two separate beams at right angles to each other along the two arms of the interferometer. Each half of the beam travels 3 kilometers (or 4 in the case of LIGO) before being reflected by a mirror. After returning along the arm, the two beams recombine, forming an interference pattern that depends on the relative length of the arms. In this way, a gravitational wave that changes this distance can be detected. "The problem is that the signal is so weak that it can be drowned out by anything," says Nary Man. Especially by seismic noise, due to vibrations caused not only by earthquakes but also by weather events and human activity.

The challenge is that the signal is so weak that anything can pollute it.

After a first generation of instruments, sensitivity has been enhanced in the advanced versions of VIRGO and LIGO. The European instrument, built near Pisa (Italy), will thus be able to "listen" to a volume of space a thousand times larger, which will increase the number of detectable gravitational waves. Working together with the two US-based instruments of the LIGO project will make it possible to precisely locate a source in space.

A new window on the Universe

There are two main reasons behind the search for gravitational waves. The first is that it provides the possibility of performing "strong-field" tests of the general theory of relativity (that is, using extremely massive objects), something that is currently very difficult to achieve. And the second is that it will open up a new window with which to observe the sky: gravitational astronomy. 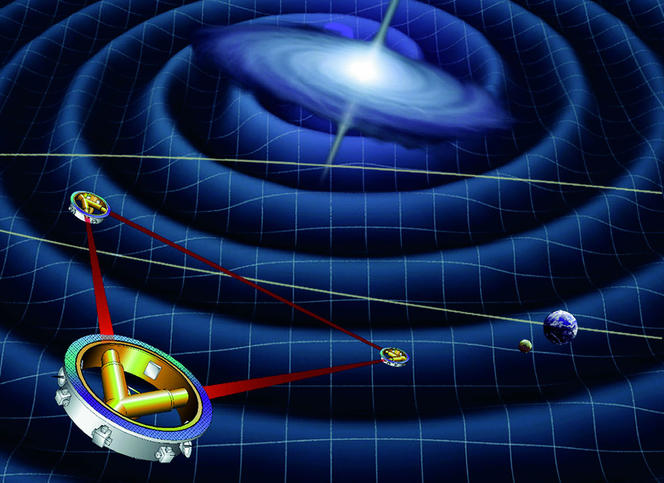 Artist's view of eLISA, which will be the first gravitational-wave space observatory. It will be able to detect waves emitted by supermassive black holes. 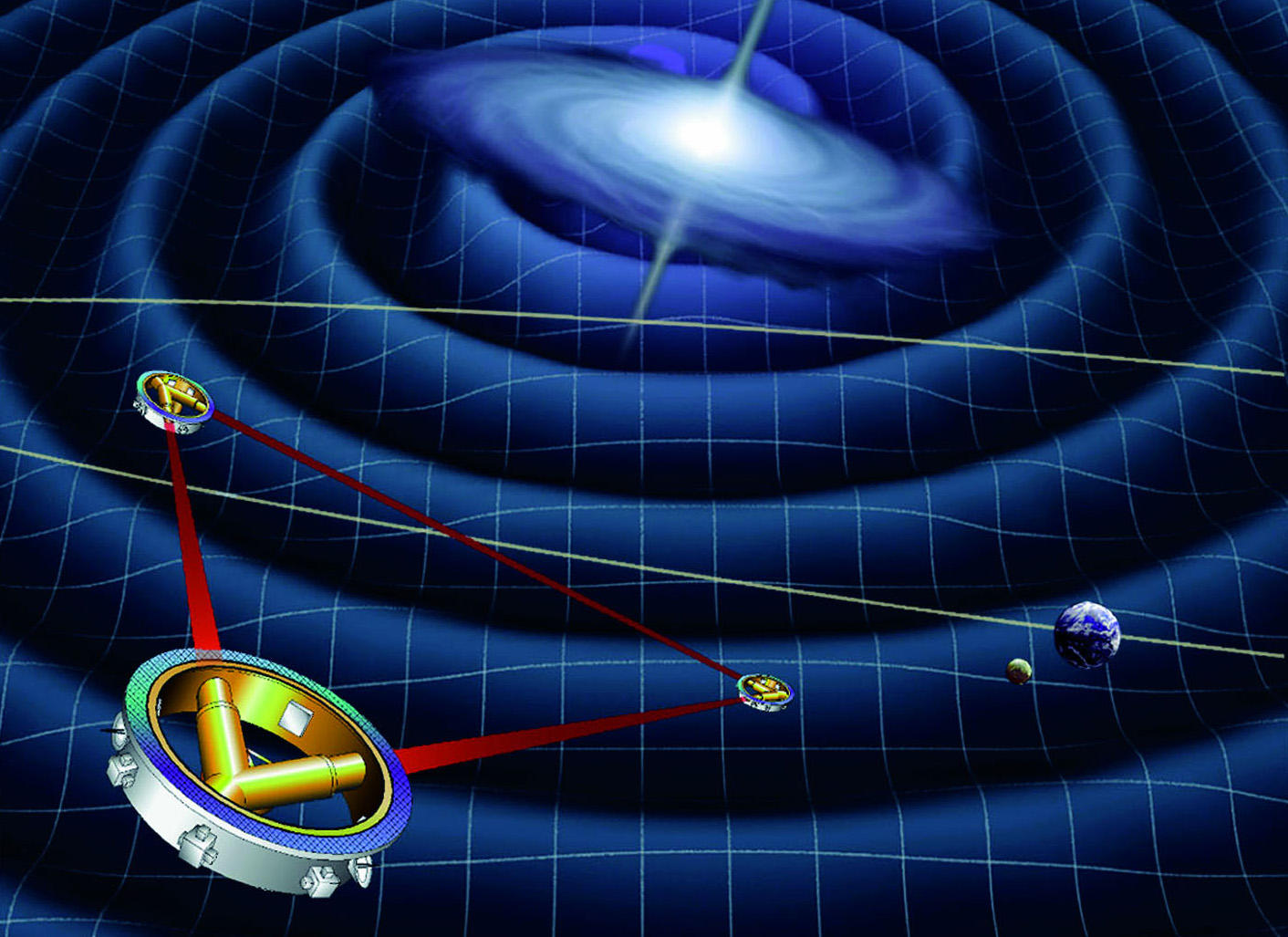 Artist's view of eLISA, which will be the first gravitational-wave space observatory. It will be able to detect waves emitted by supermassive black holes.
ESA
ESA
Share
Share

However, not all gravitational waves, for instance those from supermassive black hole systems, will be detectable by VIRGO and LIGO. With a frequency of less than a Hertz, their signal will be drowned out by seismic noise. To get round this problem, a space project called eLISA is being planned. Three satellites will form an interferometer, based on exactly the same principle as Earth-based instruments, but with "arms" that are millions of kilometers long, which will improve detection sensitivity. "The hardest thing will be to ensure that the distance variations measured are due to gravitation rather than to any other force, such as electrostatic force," Binétruy explains.

The solution found by the scientists was tested as of November by the LISA Pathfinder mission. Should it be successful, the experiment will pave the way for eLISA, which won't be launched until 2030.

This article was originally published in French on CNRSlejournal on 11.2.2015. It was updated on 11.2.2016, following confirmed detection.

Article
Artemis: To the Moon and beyond
astrophysics