Black holes and neutron stars meet up with a bang

Black holes and neutron stars meet up with a bang

Five years after achieving the first-ever detection of the coalescence of two black holes, the gravitational wave observatories LIGO and Virgo have now announced that they have for the first time witnessed mergers of a black hole and a neutron star. Although predicted by theory, these kinds of mixed compact binary systems, called NSBH binaries since they are made up of a neutron star and a black hole, had never been seen before. “Until now, the only systems we had detected by means of electromagnetic radiation or gravitational waves were pairs of black holes or pairs of neutron stars,” explains astrophysicist Astrid Lamberts, a CNRS researcher at the J.L. Lagrange laboratory1 and member of the Virgo collaboration at the Côte d'Azur Observatory in Nice (southeastern France). “The black hole-neutron star binary was the missing couple.” Studying such mixed binary systems should enable astrophysicists to better understand and model their abundance, origins and evolution.

18 months for a double discovery

On 5 January, 2020, as the world was on the verge of entering a pandemic that did not yet have a name, the Advanced Virgo observatory in Italy and the Advanced LIGO observatory in Livingston (US) simultaneously recorded the signal of a gravitational wave produced by the final moments of a collision between two compact bodies. Ten days later, the two US detectors and Advanced Virgo captured the shockwave emitted by a distinct but similar cataclysm. A year and a half on, after months of analyses and modelling carried out jointly by researchers at LIGO in the US, Virgo in Europe and KAGRA in Japan, it has been confirmed that the two events, dubbed GW200105 and GW200115, were the very first observations of the merger of a black hole and a neutron star.

It is important to realise that gravitational astronomy requires a long and complex process of filtering and modelling the raw signals received by the detectors in order to extract usable information from them. The analyses, which are based mainly on the equations of general relativity, showed that GW200105 was the result of the collision of two compact bodies with masses of, respectively, 8.9 and 1.9 times that of the Sun, while GW200115 was caused by the coalescence of two bodies of 5.7 and 1.5 solar masses. Both events took place between 800 million and a billion years ago, at a time when there were as yet no animals or plants on Earth, and when, according to the Snowball Earth hypothesis, the planet may have been about to freeze over. More importantly, in both cases the heavier body in the pair is consistent with the predicted mass of black holes, while that of the lighter partner falls within the expected range for neutron stars. The data shows that the signals observed in January 2020 are likely to have originated in mixed neutron star/black hole binaries. 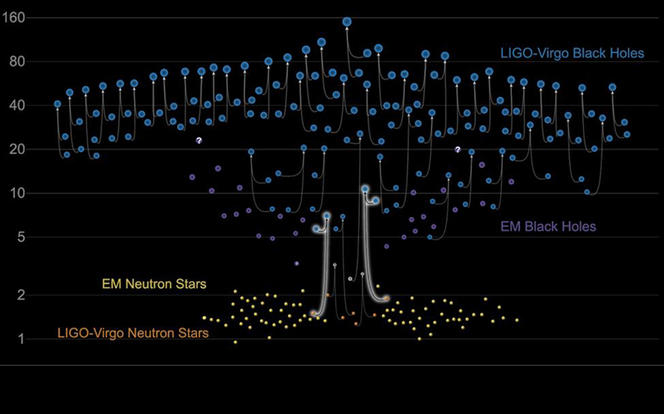 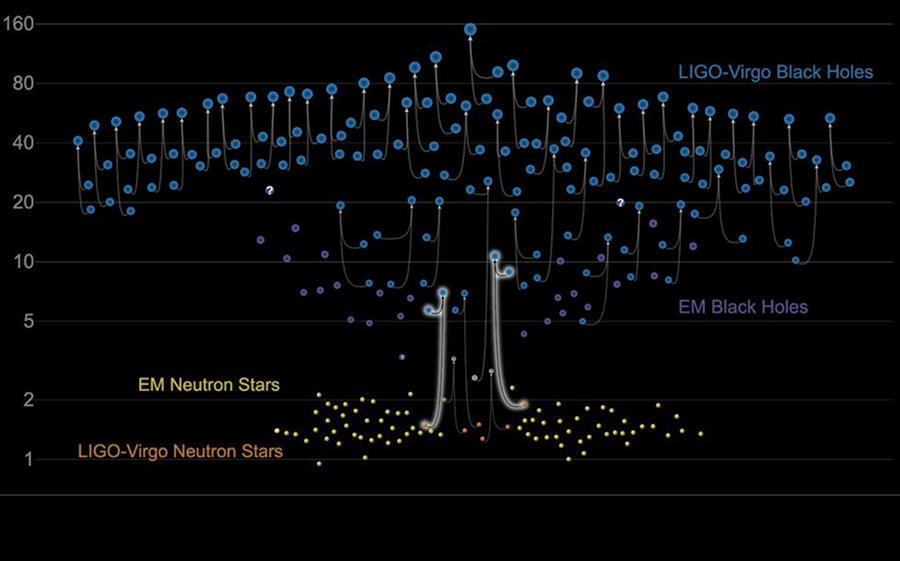 It had already been suspected that two other gravitational wave events captured in 2019 (GW190814 and GW190426) were caused by mixed collisions. However, concerning GW190426, the result of the analyses was not statistically significant enough to qualify as a “discovery”. As for the possible sources of GW190814, the estimated mass of the lighter body in the pair meant that it could either have been a small black hole or a large neutron star.

“By analysing the shape of the gravitational wave, we can measure the masses of the two objects that merged. For these latest two events, the lighter body falls within the range of the masses of the neutron stars already detected, and is also compatible with evolutionary models of these mixed systems,” explains Matteo Barsuglia, CNRS senior researcher at the APC2 and lead scientist of the Virgo collaboration for France. “If we had spotted a change in the shape of the gravitational wave caused by the deformation of the lighter object or by its break-up, this could have been further direct evidence that it really was a neutron star. But there was no such evidence, which is not surprising in the case of GW200105 and GW200115, when you take into account the sensitivity of the detectors, the distance of these bodies, and the ratio of their masses. Once our interferometers are sensitive enough, we hope to be able to detect such ‘tidal effects’, which are specific to neutron stars, in future observation campaigns. In addition, analysis of these effects will enable us to have a better grasp of the internal structure of neutron stars.”

Further confirmation of this double discovery could have been obtained using a completely different type of instrument. Unlike pairs of black holes, which release no electromagnetic radiation, mixed systems can emit signals that are potentially detectable by conventional telescopes, as was the case for event GW170817, which was caused by the collision of two neutron stars. However, besides the fact that the sources of GW200105 and GW200115 are extremely distant, their position could not be determined accurately enough to point telescopes at them successfully, and no light was detected from these events. The absence of any emission of electromagnetic radiation could also be due to the difference in mass between the neutron star and the black hole, which, being much more massive, could have rapidly gobbled up the neutron star before it was torn apart, thus preventing any light being emitted. 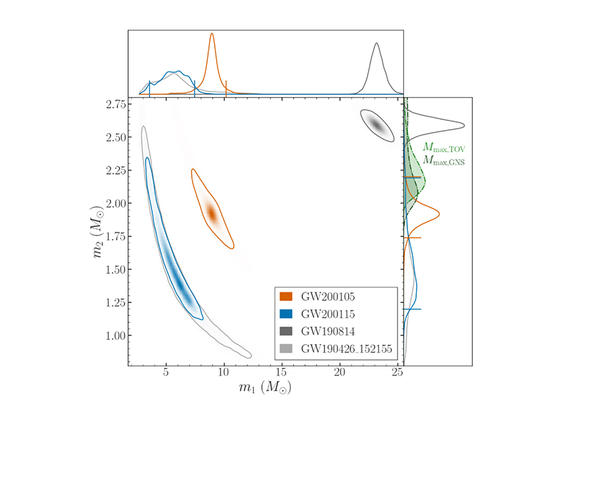 Current state of knowledge about the masses of the objects that produced GW 200105 and GW 200115. The horizontal axis features the mass of the heavier object (the black hole), while the vertical axis corresponds to the mass of the lighter object (the neutron star). At the top, the blue curve, for example, shows that the black hole of GW 200115 had a mass between 3.5 M and 7.5 M solar masses. 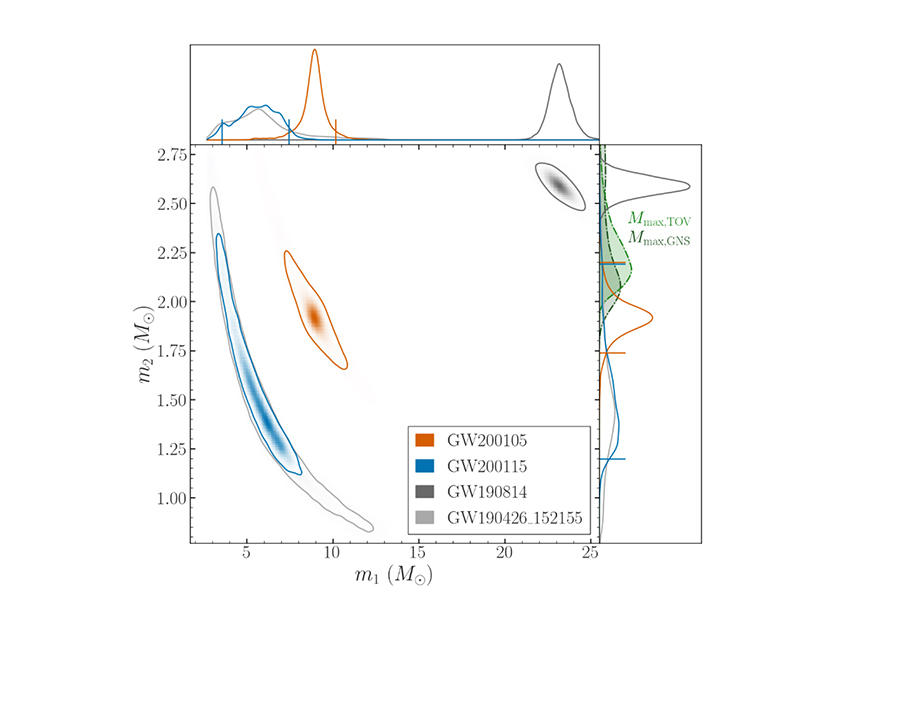 Current state of knowledge about the masses of the objects that produced GW 200105 and GW 200115. The horizontal axis features the mass of the heavier object (the black hole), while the vertical axis corresponds to the mass of the lighter object (the neutron star). At the top, the blue curve, for example, shows that the black hole of GW 200115 had a mass between 3.5 M and 7.5 M solar masses.
LIGO Virgo & Frank Elavsky; Aaron Geller/ Northwestern University
LIGO Virgo & Frank Elavsky; Aaron Geller/ Northwestern University
Share
Share

Now that all three possible types of compact binary system have been observed, scientists will henceforth be attempting to understand their properties. “In fact, this discovery will enable us to improve our knowledge of the most extreme phenomena in the Universe, and help us to elucidate the mechanisms that generated them,” Lamberts points out.

Astrophysicists have two main scenarios to describe the formation of neutron star/black hole binaries. The first, called isolated binary evolution, postulates that the pair was initially a binary star, one of which eventually evolved into a black hole, and the other into a neutron star. In the second theory, called dynamic interaction, the binary forms relatively late on, when gravitational interaction causes two previously independent bodies to orbit around each other following a chance encounter. To help decide between these two scenarios, analysis of gravitational waves yields another crucial piece of information: the direction of rotation, or spin, of the black holes. In the case of isolated binary evolution, the black hole's spin is expected to be aligned with its companion's orbit, whereas in the event of dynamic interaction, the direction of the two spins would be independent of each other.

Using the GW200105 signal did not make it possible to distinguish between the two scenarios. On the other hand, in the case of event GW200115, analysis of the data shows that the black hole was spinning clockwise, whereas the neutron star was orbiting it in the opposite direction. This appears to show that the system formed when the black hole gravitationally captured the neutron star. 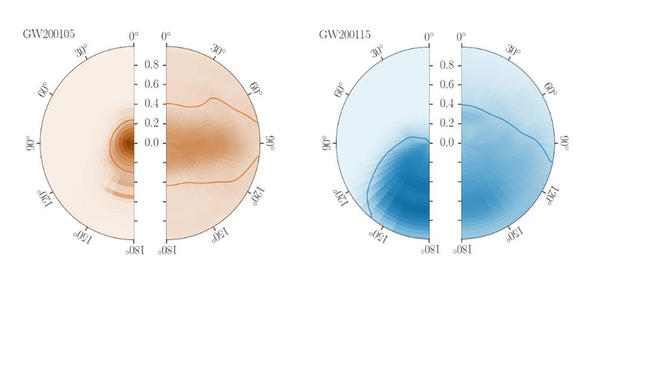 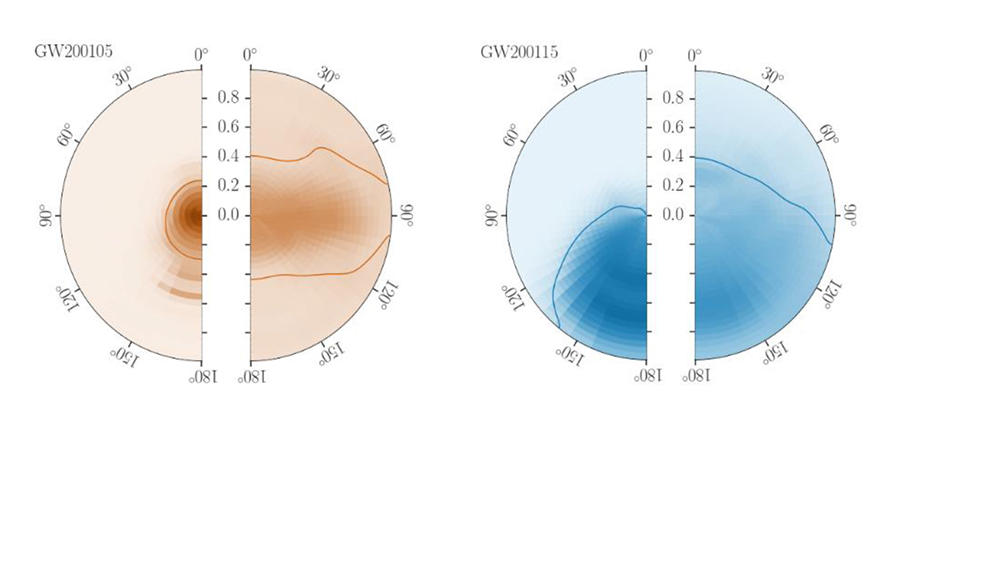 A change in perspective

Future sightings should help determine more accurately how often such binary systems occur, enabling researchers to establish the most likely formation scenarios. Based on the current two observations, it is estimated that 5 to 15 pairs of this type are formed per year within a radius of one billion light years, a range that does not yet enable scientists to opt for either possibility.

“This latest monitoring cycle, which ended in March 2020, has already enabled us not only to discover new source types, like the one we have just announced, but also establish a second catalogue of gravitational wave sources, with 39 new ones being added to the 11 detected in earlier campaigns,” Barsuglia says. “And we haven't yet finished analysing the second part of the campaign. The next cycle is due to start in mid-2022, using even more sensitive interferometers: we expect to detect hundreds of events, which will bring a real change in perspective. Although we obviously hope to identify new source types, our main task will be to carry out more comprehensive and statistical studies of source populations. This should enable us to refine our knowledge of formation scenarios and of certain aspects of stellar evolution, do some cosmology, and conduct extensive tests of general relativity.”