Black holes of the third kind

Black holes of the third kind

Artist's impression of a binary system of black holes about to collide.
Mark Myers, ARC Centre of Excellence for Gravitational Wave Discovery (OzGrav).
Share
Share
Virgo and LIGO have just announced the detection of gravitational waves produced by the oldest and most massive source ever observed. The discovery reveals the existence of a class of black holes that had never before been detected, and could explain how supermassive black holes are formed.

On 21 May 2019, the European interferometer Advanced Virgo and the two US interferometers Advanced LIGO simultaneously spotted a signal (GW190521) lasting just one tenth of a second. Although very brief, this ripple in the fabric of spacetime turned out to be so complex that it took astrophysicists more than a year to determine its origin by analysing and comparing it with their theoretical models. They concluded that what they had detected was caused by the formation, 7 billion years ago, of a black hole with a mass around 142 times that of the Sun, resulting from the merger of two black holes of 65 and 85 solar masses, respectively. Until now, no such object had ever been observed in this range of masses. By demonstrating the existence of intermediate-mass black holes, this groundbreaking discovery could help solve the mystery surrounding the formation of supermassive black holes, as well as shed light on the final stages in the lives of massive stars. The results are presented in two papers co-authored by 76 scientists from six teams from the CNRS and associated universities, published in the journals Physical Review Letters and Astrophysical Journal Letters. 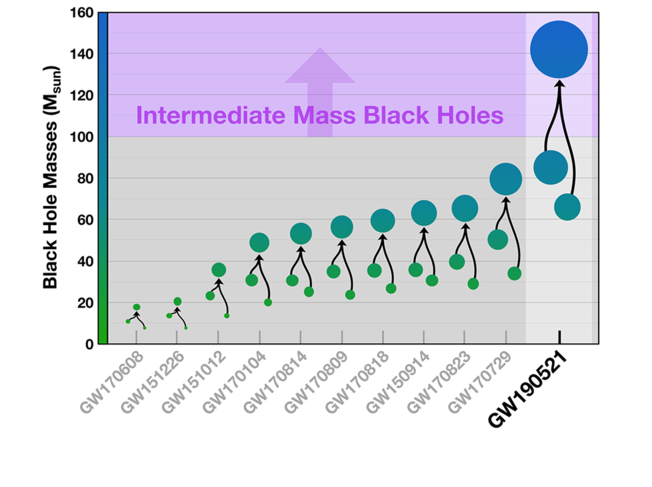 Figure comparing the source of the event GW190521, the first clear detection of a black hole of intermediate mass, to that of other detections made by Ligo and Virgo. 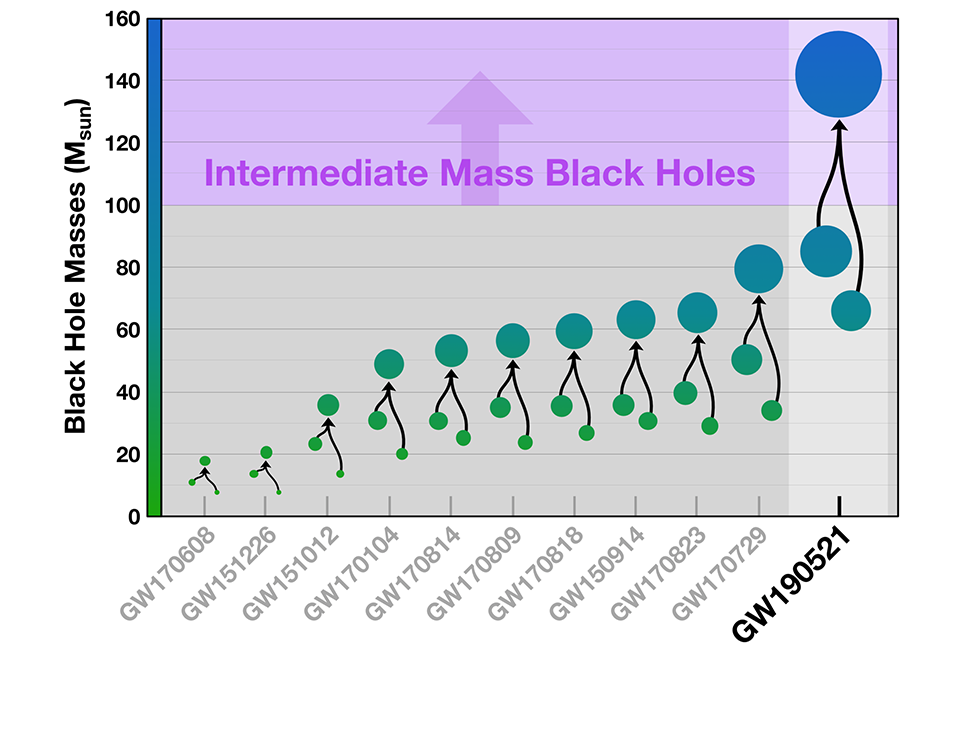 A tell-tale thud in spacetime

Ever since the very first direct detection of colliding black holes in 2015, the LIGO/Virgo international collaboration has chalked up a series of a dozen or so observations of gravitational waves resulting from the collision of compact objects such as black holes and neutron stars. But what makes GW190521 stand out from the crowd is the exceptionally short and complex nature of the signal, which defeated the models used previously and  forced the researchers to resort to new algorithms designed to decipher ‘exotic’ sounds. “Unlike the black hole mergers usually detected, which reverberate like an increasingly high-pitched chirp, GW190521 only lasted one tenth of a second and was more similar to a thud: it was then that we realised that we were dealing with an exceptionally massive source,” explains Nelson Christensen, a CNRS senior researcher and head of the Artemis laboratory (Observatoire de la Cote d’Azur) in Nice (southeastern France). “The long and arduous task of deciphering this particularly complex signal ended up yielding a great deal of information about what exactly happened during the cosmic cataclysm that produced it. Although we cannot totally exclude various alternative hypotheses as yet, the most likely scenario is that we detected the most massive merger of black holes ever.”

According to this scenario, when the Universe was only half its current age, two black holes weighing respectively 85 and 65 solar masses collided, leading to the formation of a single hole of 142 solar masses and releasing the equivalent of 8 solar masses of energy in the form of gravitational waves. It was these gravitational waves that our ground-based interferometers eventually detected. This sets a quadruple record, whether in terms of the distance of the source and the amount of energy released, or with regard to the estimated masses of the remnant black hole and its progenitors. However, this finding isn’t just about busting records. By overturning what we thought we knew about black hole populations and the life cycle of stars, it raises the hope of solving the enigma of the formation of supermassive black holes like the one that sits at the centre of our own Milky Way.

A missing link in the black hole bestiary

All the black holes observed or inferred so far can be divided into two populations: on the one hand,  first-generation stellar black holes, resulting from the collapse of massive stars, and second-generation ones derived from the merger of other stellar black holes, with masses a few dozen times that of the Sun at the most; and on the other hand, supermassive black holes exceeding 100,000 solar masses. Yet a missing link was required to explain the formation of the latter through mergers, making it necessary to postulate the existence of a third population of such intermediate-mass bodies weighing in at 100 to 100,000 solar masses. 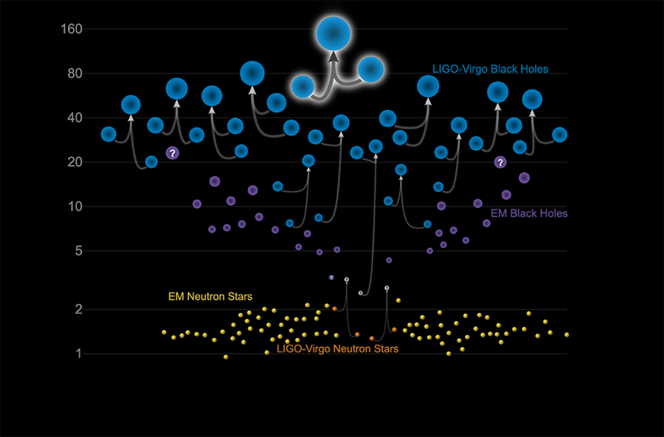 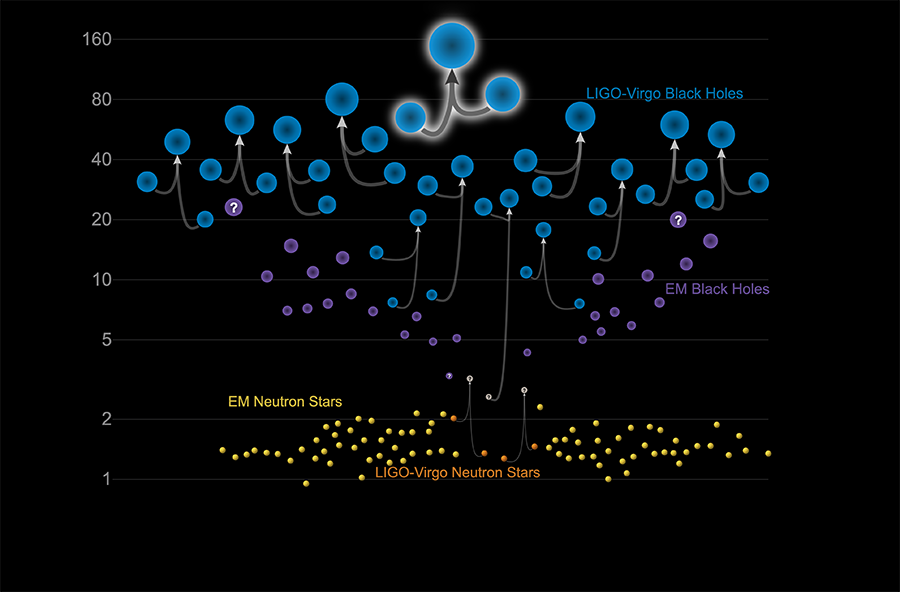 The problem was that until now nothing had ever been observed in this range of masses, so much so that it was long dubbed the “black hole desert”. With its 142 solar masses, the remnant black hole resulting from GW190521 is thus the very first intermediate-mass one ever detected directly by a gravitational observatory. "The discovery of a black hole of this mass is not in itself a conceptual revolution, but coming less than five years after the initial direct observation of black holes, GW190521 is the very first data point in a new phase of exploration that will make it possible to study the formation of this type of intermediate objects and understand how they could evolve into supermassive black holes," says Christensen.

Even more of interest to astrophysicists is that the masses of the two progenitor black holes appear to exclude the possibility of their being first-generation bodies. This is because the commonly accepted model of stellar evolution predicts that, due to a quantum phenomenon called “pair instability”, stars whose helium core has a mass of 65 to 130 solar masses cannot collapse to form a black hole. Instead, the star blows apart in a huge supernova, blasting all its contents into space. Astrophysicists are intrigued – and excited – about the fact that one, or even both, of GW190521’s progenitors lie right in this “forbidden” range, and they have already begun to explore various hypotheses that could explain their formation. Were they formed by the merger of other black holes? Are they primordial black holes formed shortly after the Big Bang? Or do we simply need to rethink our models of stellar evolution? 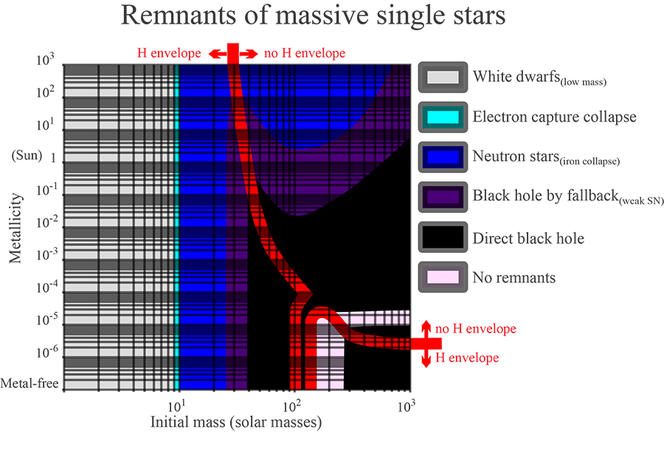 Diagram showing what becomes of stars after their "death", according to their initial mass and their metallicity (which measures their concentration in elements other than hydrogen). 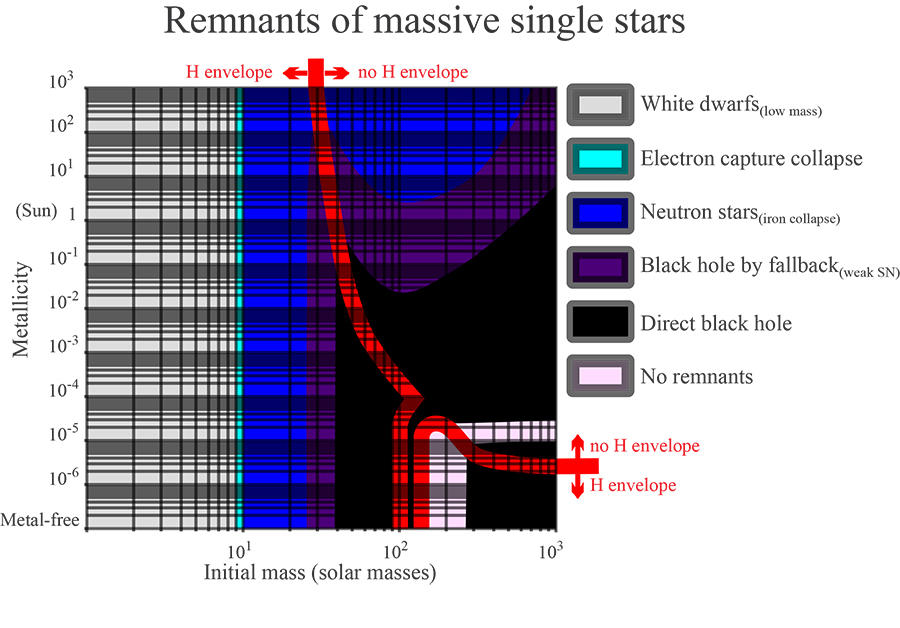 In fact, like all great scientific discoveries, GW190521 raises more new questions than it provides clear, definitive answers. In any case, it justifies all the work that has gone into gravitational astronomy and encourages researchers to build new observatories even more sensitive than Virgo/LIGO. “The fact that we were able to detect and analyse GW190521 demonstrated the reliability and quality of our instruments, but also their limitations. Because of seismic noise, today’s ground-based interferometers will have great difficulty detecting events involving objects of up to a few hundred solar masses,” Christensen points out. “The ground-based Einstein observatory may enable us to observe black holes of up to a few thousand solar masses. However, the most promising project, in which European research is heavily involved, is the LISA space-based gravitational observatory mission which will be able to detect black holes of up to a few million solar masses. It is scheduled to launch in 2034.”

Article
A new rover to land on Mars
Ligo