Claude-Agnès Reynaud, Jean-Claude Weill and Matthieu Mahévas
Studies in widely vaccinated populations, such as those in Israel and the UK, have confirmed in vivo the protection promised by different vaccines. The risk of vaccinated individuals transmitting the virus may also be reduced. Three experts working at the INEM offer their insights.

Israel and the UK, which launched their vaccination campaigns at an early stage, enjoy considerable coverage of their populations,1 which back in January and February enabled the large-scale collection of preliminary data at a time when the so-called UK variant was already widely present in these countries. Following the studies by pharmaceutical companies involving cohorts of a standard size in order to obtain market authorisation for their vaccines (20,000 to 30,000 people for Pfizer-BioNTech and AstraZeneca/Oxford), results on hundreds of thousands of individuals are now available. The exceptional situation in these two countries, which benefit from high-quality health and clinical research structures, has thus made it possible to perform a detailed evaluation of “real life” vaccine performance in a context of active virus circulation. 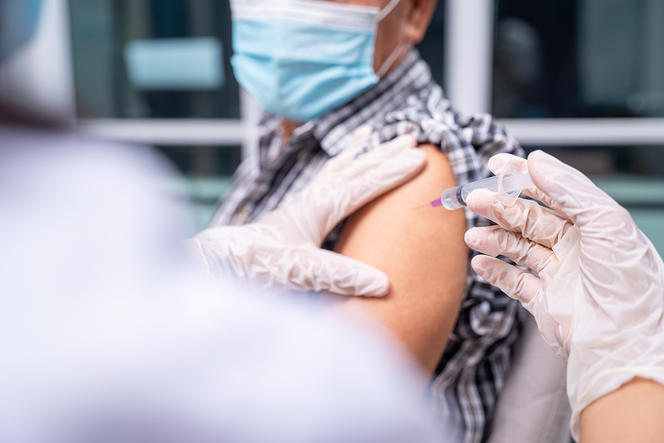 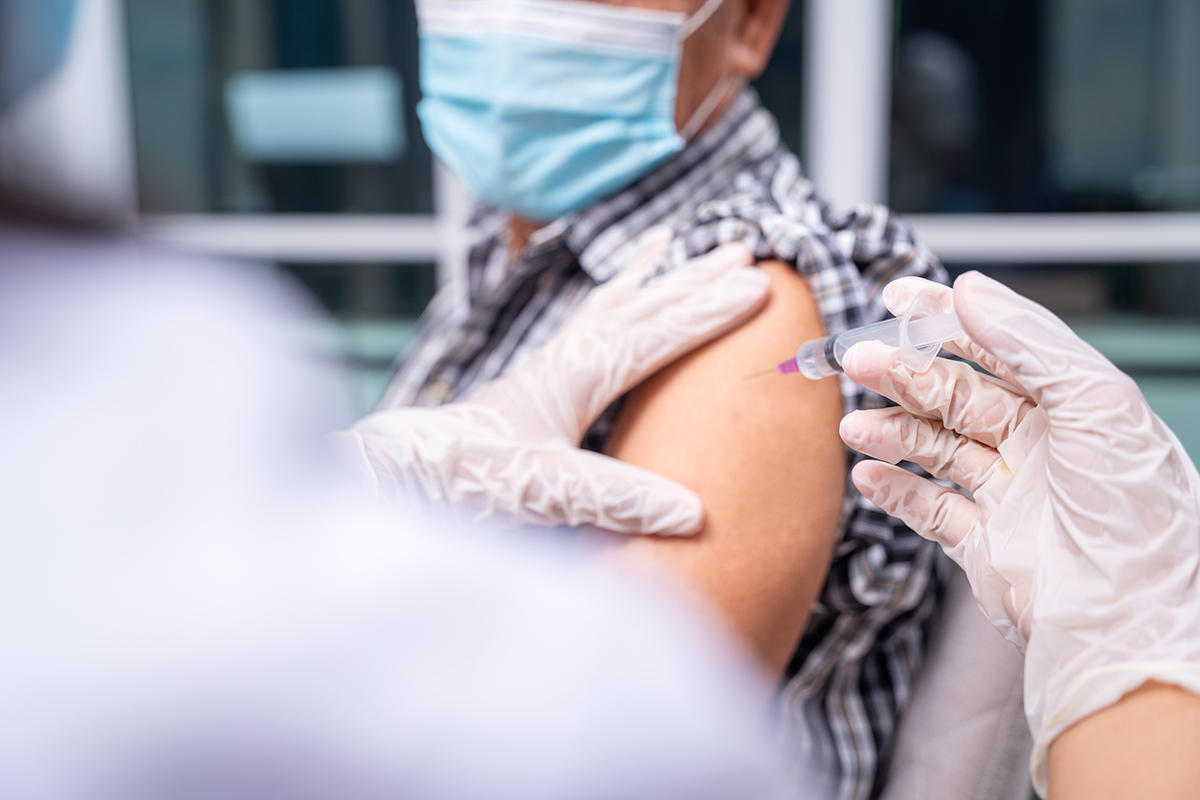 A study on data concerning nearly 600,000 people who received the Pfizer-BioNTech jab,2 versus a control group of as many non-vaccinated individuals, was thus conducted in Israel and confirmed the excellent efficacy of this vaccine. The survey consisted in counting how many of these subjects subsequently tested positive, how many experienced symptoms of the disease, and how many needed to be hospitalised, suffered from severe forms of the virus and died. The vaccinated and control groups displayed the same homogeneous distribution to take account of any variations as a function of age, gender, geographical region of residence and comorbidity factors such as diabetes, cancer or obesity, etc. 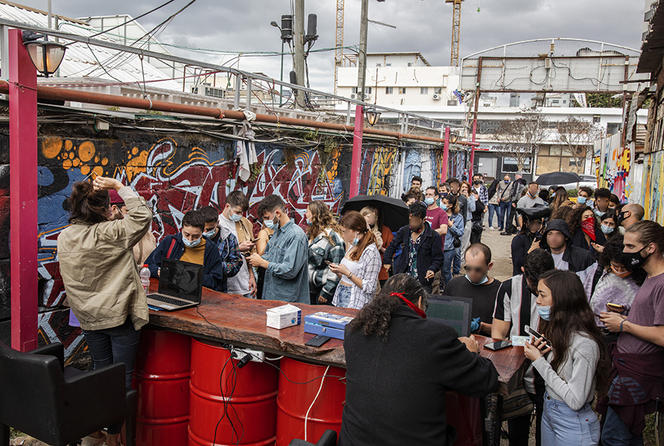 To attend a concert in Tel Aviv on 26 March 2021, spectators had to show their “Green Pass”, a QR code confirming their vaccination or recovery from Covid-19, or a negative PCR test. In Israel, more than 61% of the population has already received at least one dose of a vaccine. 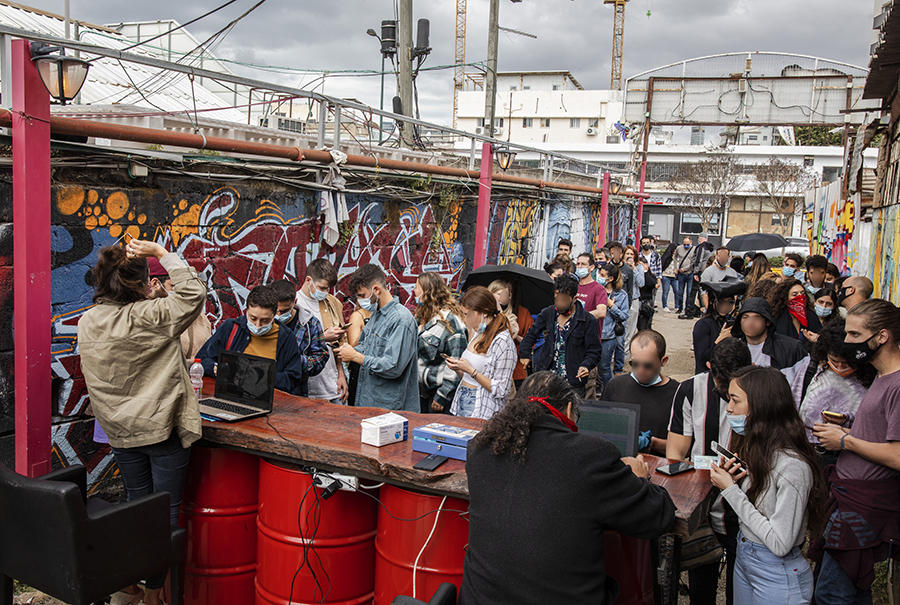 To attend a concert in Tel Aviv on 26 March 2021, spectators had to show their “Green Pass”, a QR code confirming their vaccination or recovery from Covid-19, or a negative PCR test. In Israel, more than 61% of the population has already received at least one dose of a vaccine.
DAN BALILTY/The New York Times-REDUX-REA
DAN BALILTY/The New York Times-REDUX-REA
Share
Share

According to its findings, three to four weeks after the first dose the incidence of asymptomatic infections (people who tested positive but experienced no symptoms of the disease) was reduced by 52% when compared to the control population, without any notable differences due to age, gender or comorbidities, etc. This reduction in the number of infections rose to 90% as early as seven days after the second dose. This means that one week after the last inoculation, a person had ten times less risk of being unknowingly infected and potentially transmitting the virus.

The same study found that two to three weeks after the first jab of the Pfizer-BioNTech vaccine, protection against a symptomatic infection (disease with symptoms) was 57%, and reached 74% regarding the risk of hospitalisation. One week after the second injection, protection attained the excellent level of 92%, whether in terms of experiencing symptoms or being hospitalised. The most important result of this study was the demonstration of a drastic reduction in the mortality rate, which fell by 72% two to three weeks after the first dose, with no deaths recorded one week after the second.

A small proportion of correctly vaccinated individuals were nevertheless infected and presented symptoms of the disease, even if the outcome was not fatal. In an attempt to determine whether they were as contagious as other patients, a study in Israel on around 5000 patients3 of all ages suffering from Covid-19 focused on nasopharyngeal virus levels (determined from the nose to the rear wall of the pharynx); these are directly related to a patient’s viral load and provide a strong indicator of their potential contagiousness.

According to the measurements, the amount of nasopharyngeal viral RNA detected by an RT-PCR test was 3 to 4.5 times lower among patients who had received a dose of the Pfizer-BioNTech vaccine within at least the past twelve days, than in unvaccinated individuals. This suggests that nasopharyngeal carriage declines markedly as the vaccine-induced immune response develops. It is reasonable to think that carrying less virus means being less infectious, which is encouraging in terms of the potentially lower contagiousness of those vaccinated. However, the minimum amount of virus necessary to transmit the disease is not known at this stage, particularly since this quantity may evolve as a function of future variants of the virus.

Another study, conducted in a British sample,4 was able to assess the level of protection provided by two different vaccines in the elderly, for whom efficacy could prove lower due to a weakening of the immune response with age. It was found that out of 62,000 people over 80 who received the Pfizer-BioNTech vaccine, coverage reached 60%-70% after the first dose and 89% two weeks after the second inoculation, or values very similar to those obtained among younger individuals. Furthermore, for those who nevertheless contracted the disease, hospitalisation and mortality rates were markedly reduced (by 44% and 51%, respectively). And among 75,000 subjects over the age of 70 who had received their first shot of the AstraZeneca/Oxford jab, protection reached 60% after 28 days and 73% after 35 days (in France, the Haute Autorité de Santé decided on 19 March to suspend the use of this vaccine among those younger than 55 years because of rare cases of blood clots detected in Europe; Ed..) 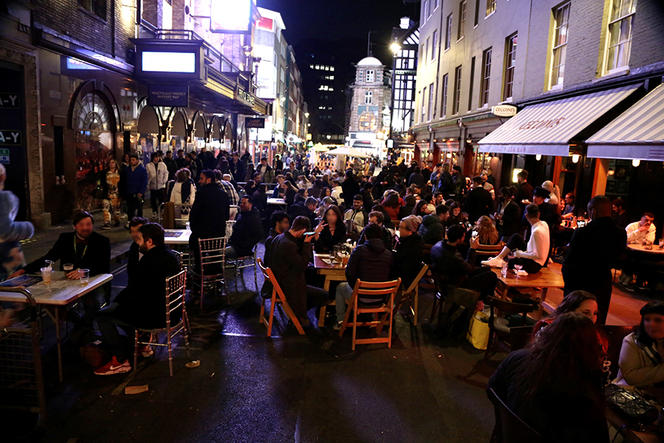 Pub and restaurant outdoor spaces (here in Soho, London) have reopened in the UK. More than 47% of the country’s population has had at least one jab of a Covid vaccine. 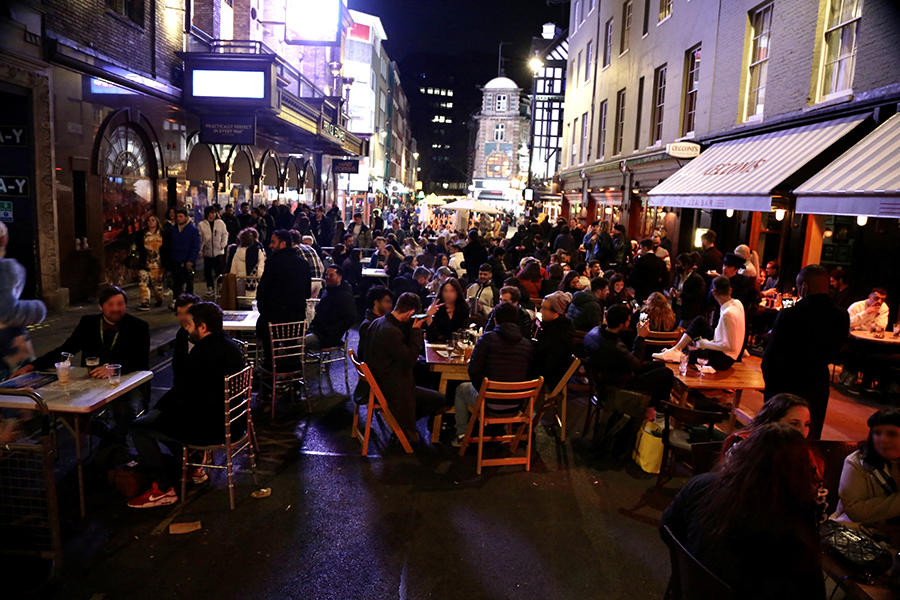 All these studies highlight the necessary time period after each inoculation to acquire initial immunisation, and the importance of the second dose to gain full protection. It is therefore not surprising that some people have contracted the virus and become ill just after their first injection. Finally, it should be noted that the time elapsing between doses varies depending on the products used: three to four weeks for the Pfizer-BioNTech and Moderna messenger RNA vaccines and two to three months for the AstraZeneca/Oxford adenovirus vector vaccine.

As for the duration of immunity, initial data on the Moderna messenger RNA vaccine, whose characteristics are very similar to those of its Pfizer-BioNTech counterpart, have shown that six months after dosing, the antibodies induced persist at satisfactory levels.5 However, numerous questions remain regarding different vaccination schemes and schedules, and in particular the timing of boosters, especially in view of the emergence of new variants that could escape the immune system.

Be that as it may, these encouraging findings should act as a spur to mass vaccination in order to reduce the fatalities and severe cases that are saturating the healthcare system, as well as to diminish circulation of the virus and perhaps nasopharyngeal carriage. Support from the population and the epidemiological success of vaccination campaigns in other countries should underpin this approach.

0
It is not too late to act for biodiversityPrevious
Between transparency and confidentiality, is electronic voting viable?Next 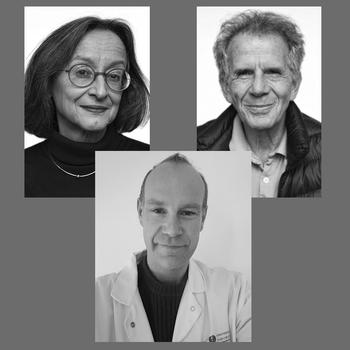