M. KULKA / Corbis
Share
Share
Nature abounds with species capable of producing harmful toxins to humans. Scientists believe some of these could be turned into useful allies.

What do a bacterium that causes ulcers, a venomous snail, and a microorganism that contaminates and poisons canned food have in common? They all produce potent toxins that are often lethal to humans. Yet by manipulating these poisons, researchers are now able to redirect their toxicity toward therapeutic purposes.

A microbial toxin to replace aspirin?

For several years, scientists have been focusing their efforts on Buruli ulcer. Caused by the Mycobacterium ulcerans bacterium, this tropical disease results in the necrosis of skin tissue. Strangely enough, affected patients exhibit no symptoms of pain or fever. This lack of fever was first found to be due to the anti-inflammatory activity of mycolactone, a toxin secreted by the bacterium. This toxin acts by inhibiting the functioning of certain white blood cells, causing an immunosuppressive effect. In June 2014, researchers discovered that mycolactone also exerts an analgesic effect by binding to certain neural receptors.1 Hence the idea of exploiting these properties for therapeutic use. 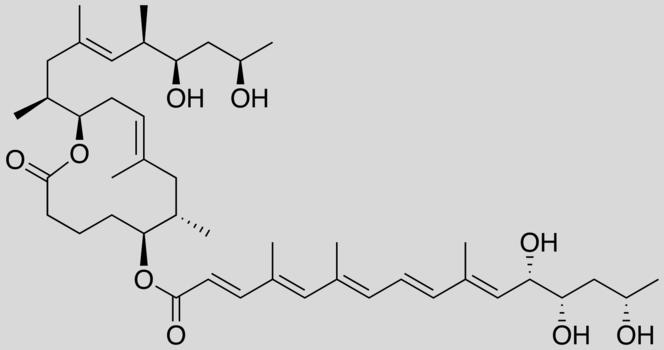 Schematic representation of the mycolactone molecule. 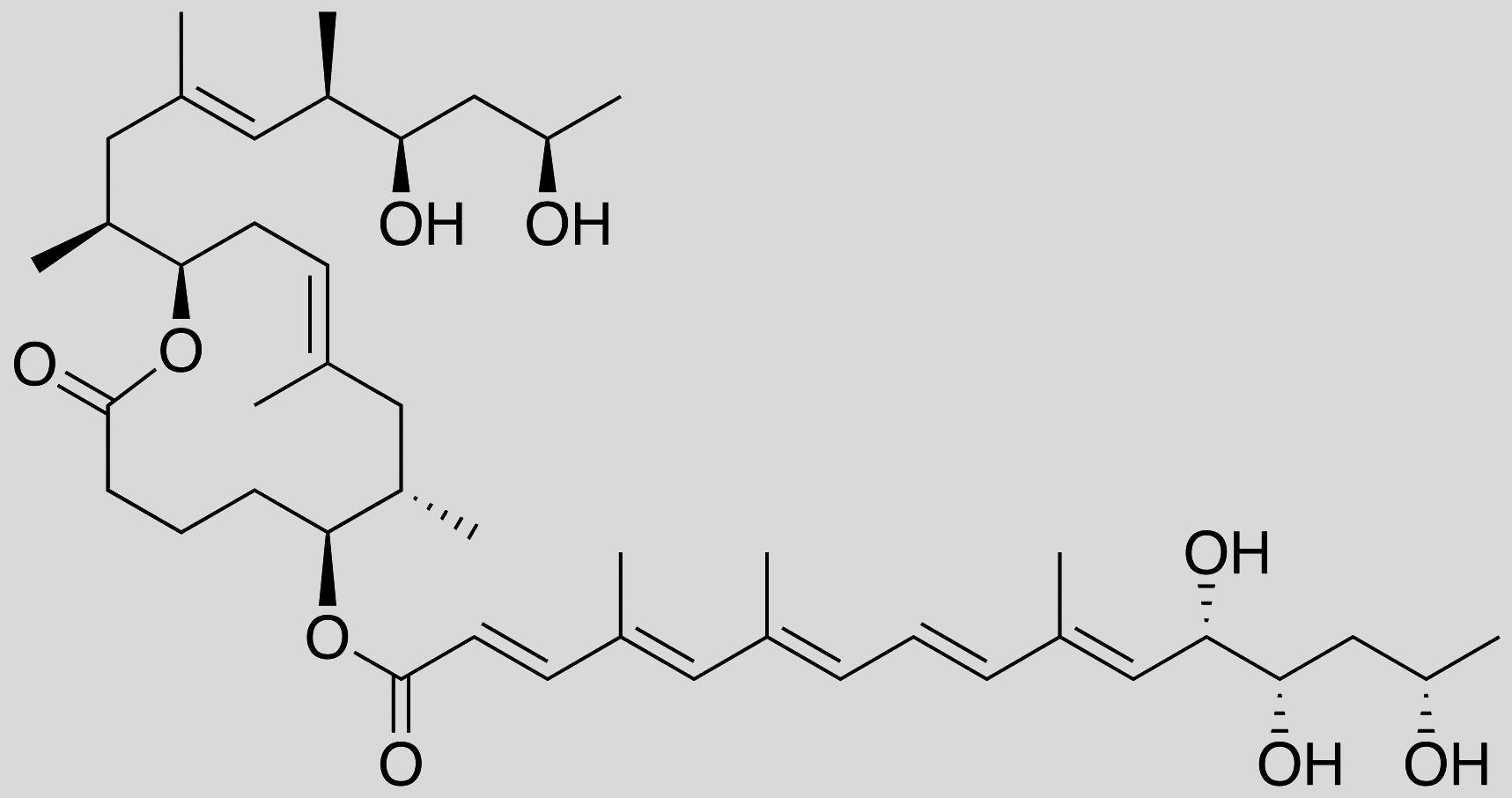 In this context, chemists and biologists screened the different active sites in mycolactone to identify those responsible for its analgesic and anti-inflammatory effects. The chemistry team, led by Nicolas Blanchard, senior researcher at the LCM,2 then synthesized a truncated mycolactone containing the “useful” active sites. When tested on human cells by Caroline Demangel, senior researcher at the Institut Pasteur, and her team, this compound displayed the same beneficial effects as natural mycolactone, but with reduced toxicity. The protective efficacy of truncated mycolactone was then tested on mice suffering from chronic skin inflammation and inflammatory pain. As a result, these symptoms regressed markedly in the rodents, and with no adverse effects.3 “We are now trying to identify in more detail the mechanisms at play at the molecular level with a view to developing an even more refined
truncated mycolactone,” concludes Blanchard.

In order to come up with new therapeutic compounds, some researchers are going as far as sounding the seabed, where venomous animals are rife. Sébastien Dutertre, a scientist at the IBMM4 is one of them. For years, he has been fascinated by the venomous cone snails that live in tropical seas. Again, scientists have succeeded in transforming some of their toxins (referred to as conotoxins) into painkillers. In particular, they have discovered that one of them—ω-conotoxin MVIIA—is capable of blocking an ion channel located in the neuron membrane. Injected intrathecally, this toxin can prevent pain signals from being transmitted to the brain. “This is how we discovered that this channel was involved in the pain mechanism,” explains Dutertre. “More generally, conotoxins may therefore prove invaluable for identifying new therapeutic targets.” Although it is an authorized compound to treat severe pain in Europe and the US, the synthetic form of this ω-conotoxin MVIIA remains little used, because of its potentially serious adverse effects (cases of suicide have been recorded). 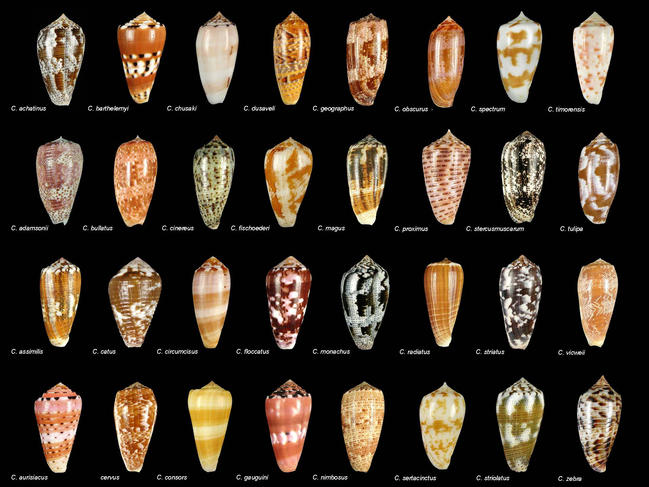 Conotoxins are isolated from the venom of marine cone snails. 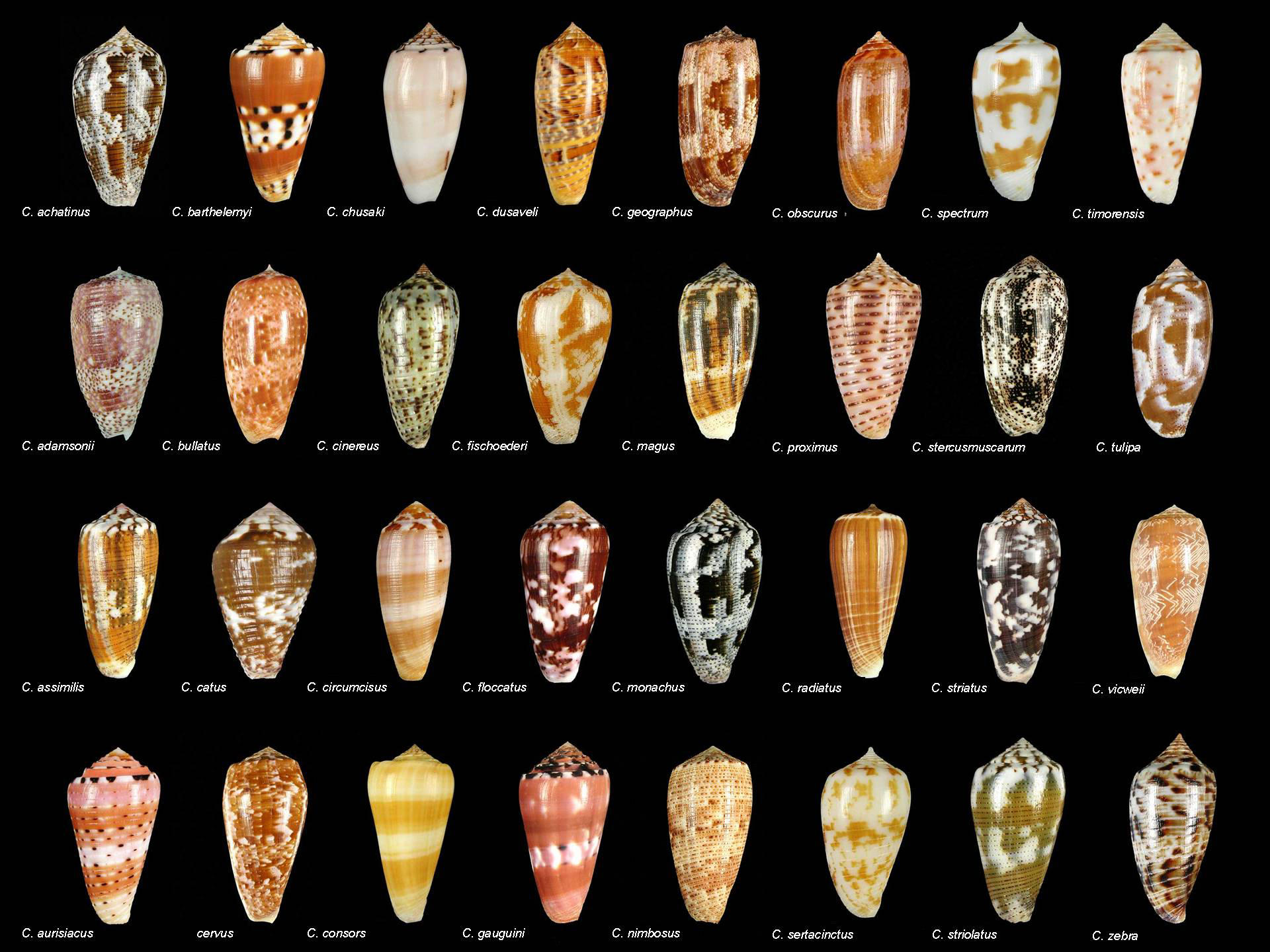 Conotoxins are isolated from the venom of marine cone snails.
S. DUTERTRE
S. DUTERTRE
Share
Share
These conotoxins do not cause addiction and are easy to synthesize in the laboratory.

Undeterred, the scientists identified a different conotoxin, which, when slightly modified in the laboratory, does not cause adverse effects. Dubbed Xen2174, this peptide prolongs the action of noradrenaline, a neurotransmitter that inhibits the sensation of pain. It has already been successfully tested to alleviate chronic pain in cancer patients. “Unlike opioids, these conotoxins do not cause addiction,” explains the biochemist. “Another important advantage is that these are small protein molecules, which are easy to synthesize in the laboratory. They can also be administered orally, provided their structure is slightly modified to avoid being degraded by digestive enzymes.”

The list of potential applications is continually increasing. Specifically, the scientists have obtained promising initial results in animals, after discovering conotoxins that could block other molecular receptors involved in epilepsy or myocardial infarction.

Last but not least, botulin neurotoxin is no doubt the most famous of toxins for medical use. Better known under its commercial name of Botox, it is produced by Clostridium botulinum, a bacterium that can contaminate canned food. Causing fatal paralysis, it is one of the most dangerous toxins. It acts by preventing the release of acetylcholine, the neurotransmitter that triggers contractions at the neuromuscular junctions. Today, botulin toxin is prescribed to millions of patients suffering from conditions linked to abnormal muscle contractions. 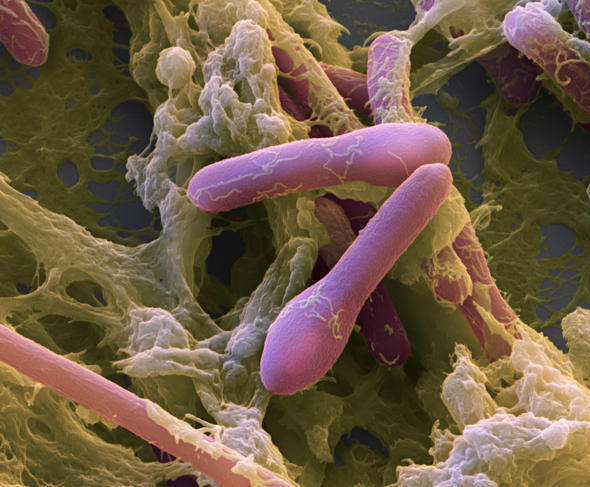 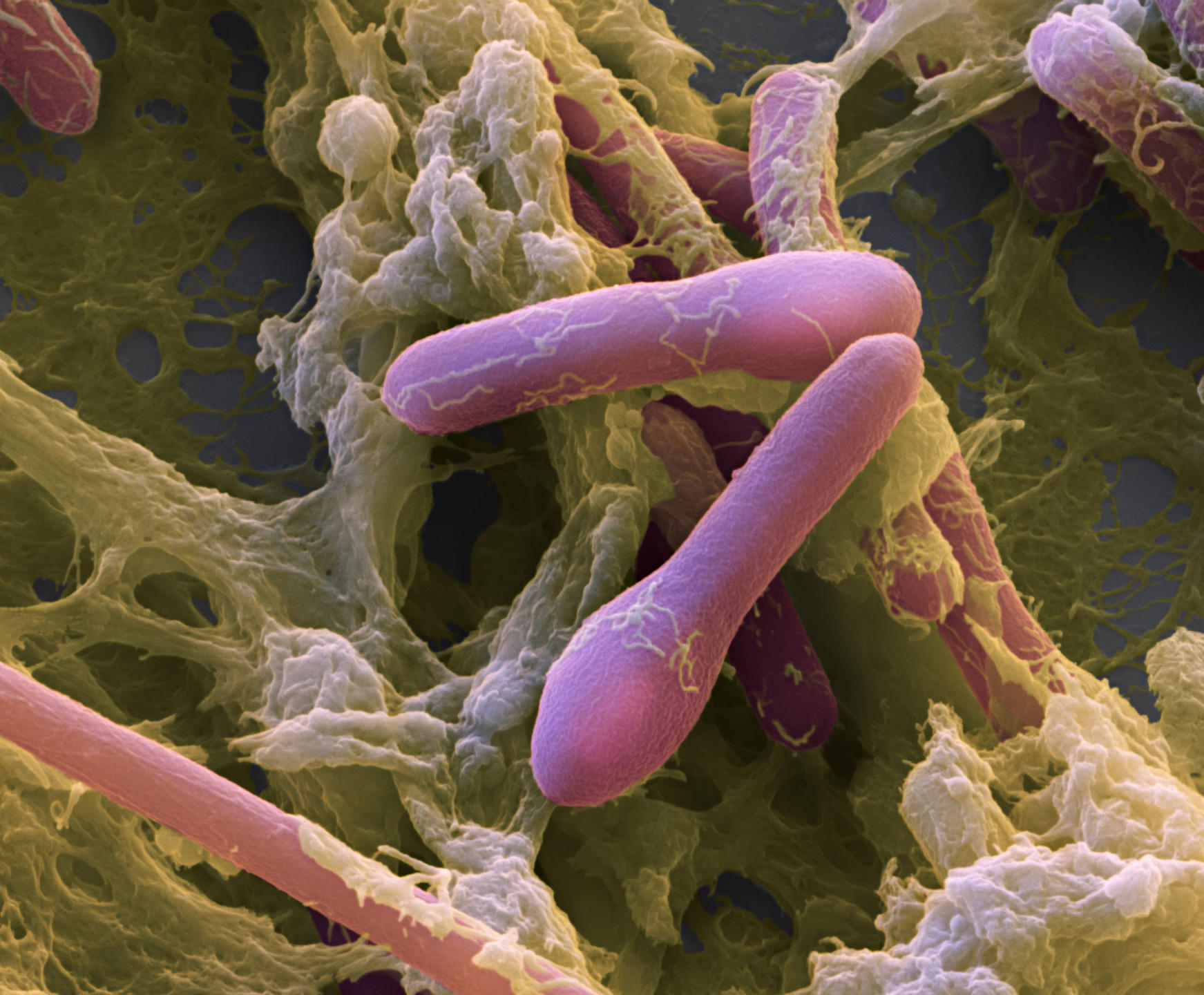 It has therefore been used since the late 1970s to correct strabismus (by injecting very small doses into certain eye muscles). Its indications have considerably broadened since then, and not just to smoothing out wrinkles by paralyzing subcutaneous muscles. Indeed, it also corrects blepharospasm (involuntary closure of the eyelids), some types of torticollis, writer’s cramp... or even the contraction of certain muscles in the limbs (spasticity) following a stroke.

The botulinum neurotoxin could soon be used as a painkiller.

Botulin toxin has also proved effective for unexpected indications. For example, it is used to treat excessive perspiration or to reduce the production of saliva (thanks to its inhibitory action on the nerve endings in the glands that produce bodily fluids), to control bruxism (excessive contraction of the jaws, which notably causes nighttime teeth grinding), or even some types of incontinence due to an overactive bladder.

“The possibility of using it as an analgesic has also been envisaged, since it has been observed that the so-called dystonic pain associated with torticollis may be relieved independently of the contraction of the muscle,” explains Bernard Poulain, CNRS senior researcher at the INCI.5 “Since then, studies have shown that botulin neurotoxin also blocks the release of the neurotransmitters involved in carrying the nociceptive information at the origin of the pain. Yet its analgesic effect through its action in the central nervous system remains to be demonstrated.” Pain, contractions, inflammation, neurodegenerative diseases, cancer, blood disorders—the number of conditions poisoned by toxins continues to rise.

Jean-Philippe Braly is a science journalist specialized in health and life sciences, the environment, ecology, nature and new technology. He is a regular writer for CNRS Lejournal/News, La Recherche, press agencies Canopy and Look at Sciences. He also produces documentaries for the radio station France Culture, and hosts of a variety of conferences and round tables...

See author's bio
SPHERE, a New Eye on Distant WorldsPrevious
The Rise and Fall of InnovationNext