An increasing number of electronic devices function independently, sometimes even without physical contact, with their interconnection making up what is known as the Internet of Things (IoT). Its plethora of applications range from a personal assistant connected to an e-commerce platform to sensors placed by researchers deep in the Amazon forest. Smartphones, to start with, are not limited to their owners’ voluntary communications, but constantly exchange with the external world to check whether their apps are up to date, or to sync accounts. The success of wireless access is also accompanied by growing miniaturisation, in order to make these mobile objects almost undetectable. But they still need a source of electricity to function.

Like batteries, supercapacitors store and release electricity through electrochemical reactions. Whether it is on the macroscopic or micrometric scale, the principle is the same, with two electrodes exchanging ions that travel through an electrolyte. Storage mechanisms, however, are different because the battery stores charges in the mass, whereas a supercapacitor does so at the interface between electrodes and the electrolyte. Batteries are therefore able to stockpile much more energy, while supercapacitors can release it with greater power, and without wearing out. Unfortunately, combining these properties within the same material is not yet possible.

The primary solution has therefore been to couple the two systems when going down to micrometric scales. David Pech, a CNRS researcher at the Laboratory for Analysis and Architecture of Systems (LAAS), explains that “the processes for producing and applying thin layers are quite similar for microbatteries and micro-supercapacitors. Where they differ is in the materials used and their charge storage mechanisms.” 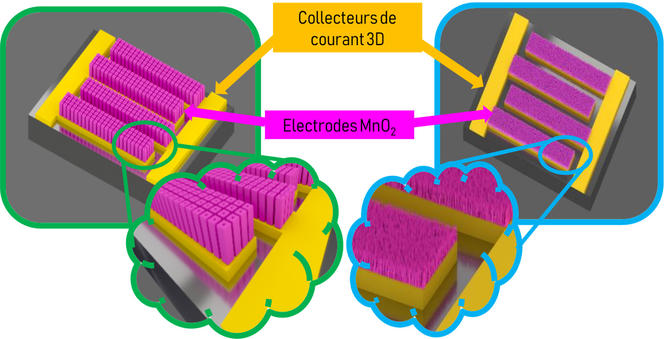 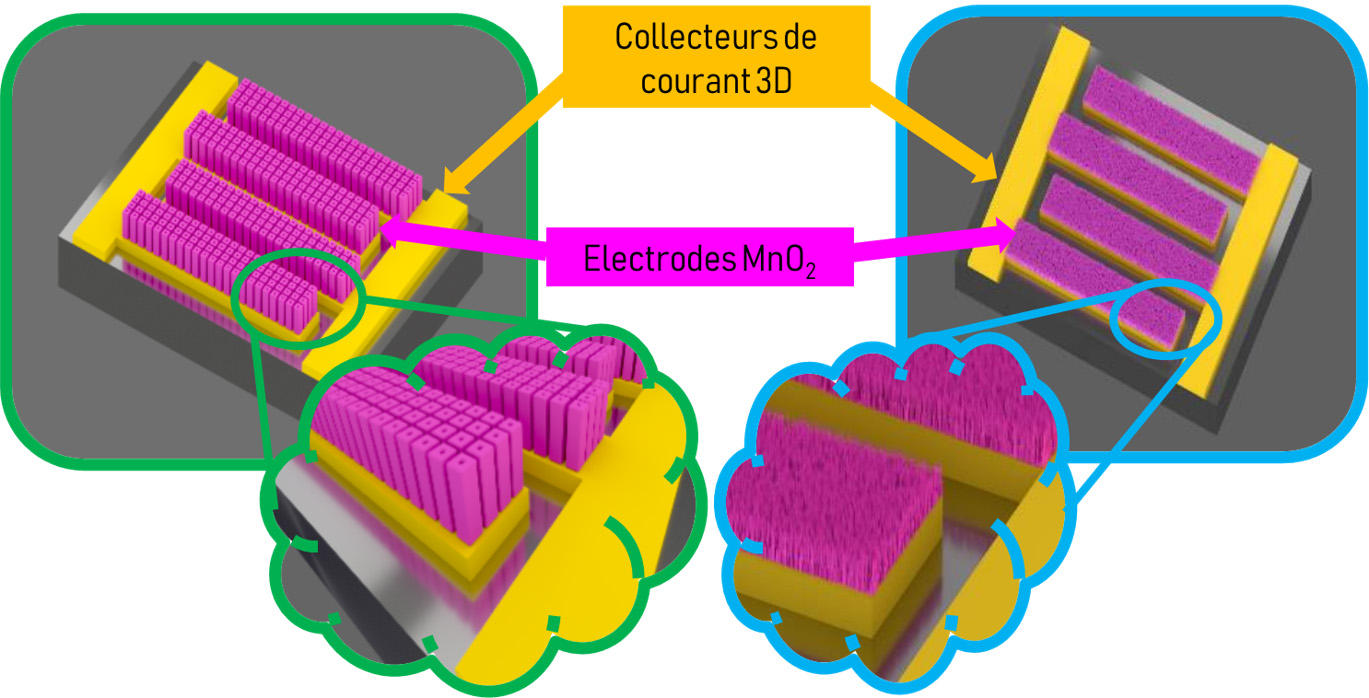 The goal is to ensure the autonomy of mobile sensors with as little maintenance as possible. A connected object, whether miniaturised or not, that takes readings of its surrounding environment consists of multiple elements that exchange the gathered information, which is then centralised, stored and transmitted via wireless communication to a data centre.

“The electric supply for these connected objects must therefore allow them to both function and communicate with network hubs,” points out Christophe Lethien, senior lecturer at the Université de Lille, and a member of the IEMN.1

“Most miniaturised connected objects consume an average amount of power that must be maintained for several minutes or hours, thus matching the properties of microbatteries. But they must transmit data at some point, for instance once a day. This operation requires a power peak that a micro-supercapacitor cannot provide alone. This is a perfect illustration of the complementary nature of microbatteries and micro-supercapacitors, and demonstrates the value of this combined approach,” explains Christophe Lethien.

A matter of surface

Since microdevices are limited by their small size, researchers are striving to improve the properties of micro-supercapacitors, especially by increasing their energy density, which is the amount of power they can store per surface unit. Scientists therefore prefer three-dimensional architectures with often porous materials, thereby extending the surface of the interface between the electrodes and the electrolyte, which is where the energy is stored. 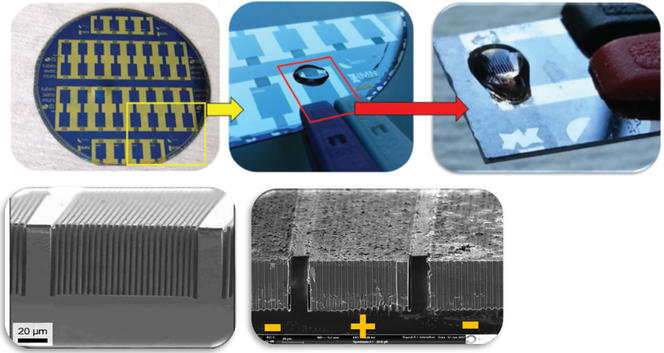 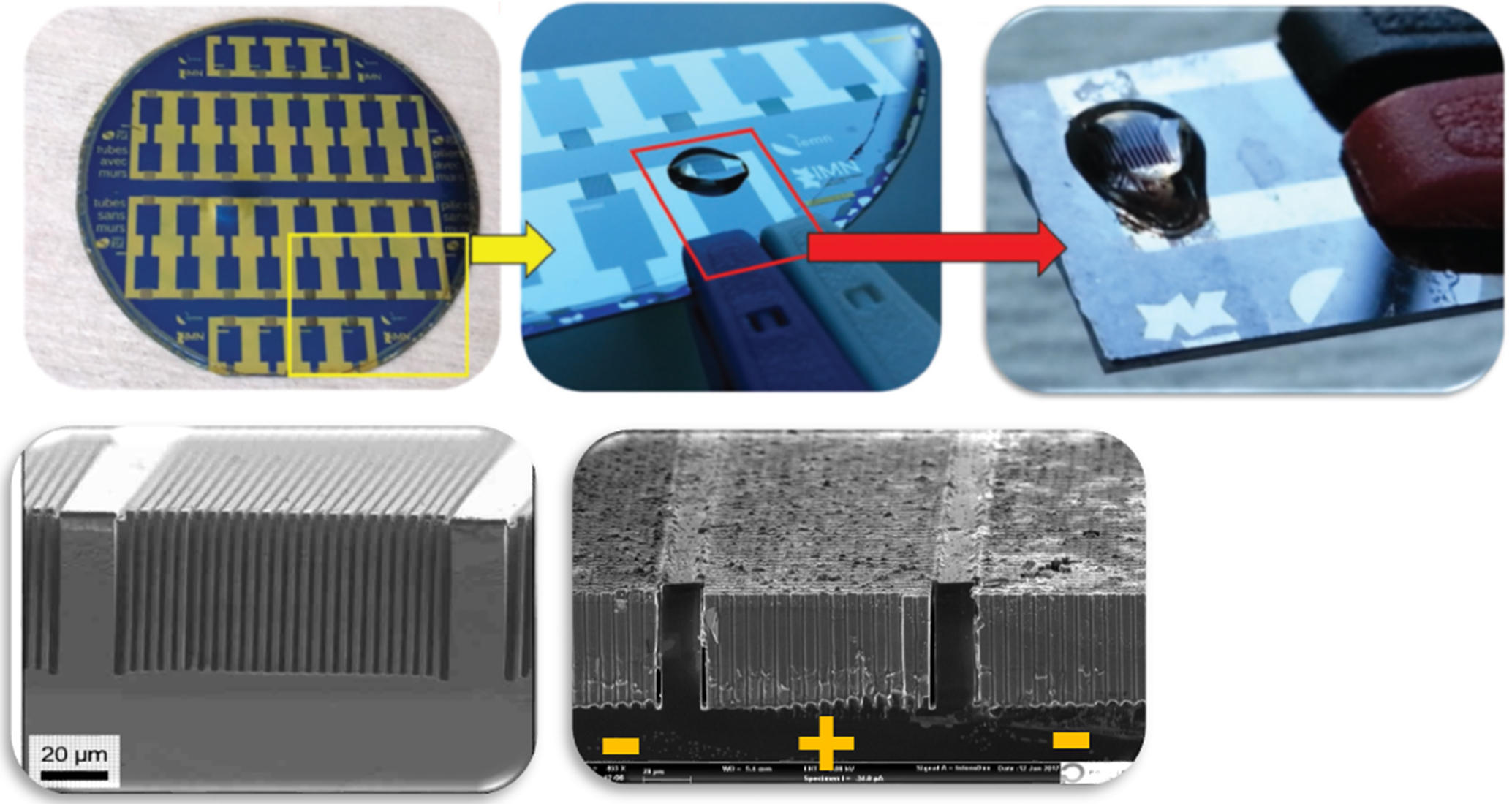 “We don’t just want to enhance energy density by a factor of two or three. We’re aiming for something groundbreaking,” says David Pech. “In recent years, we have been closely looking into ruthenium oxide, which is known for its large capacity, but also for its prohibitive cost. Yet the amounts used on the micrometric scale are so small that it actually becomes feasible.”

Smaller sizes have another advantage, as reducing the distance between electrodes accelerates ion exchange, thereby increasing the power delivered. They also facilitate energy collection, for drawing on tiny sources of energy in the environment of micro-supercapacitors (heat, variations in temperature, vibrations…) is enough to recharge them.

In search of an industrial process

Despite the promising avenues explored by researchers over the last fifteen years, no micro-supercapacitor has yet been brought to market, for lack of an industrial production process. The prototypes created in the laboratory nevertheless display exceptional properties, for example withstanding a few million charge and discharge cycles, when smartphone batteries wear out well before reaching a thousand. “What we need is to use industrial processes from the microelectronic industry as a starting point, in an effort to facilitate technology transfer from the laboratory to industry, lower prices, and improve method reproducibility,” Christophe Lethien adds. “But the main obstacle concerning micro-supercapacitors remains the electrolyte.” This material, which conducts ions between the two electrodes, is solid in microbatteries but liquid for micro-supercapacitors, which poses a number of challenges in terms of impermeability. The electrolyte, which is often corrosive, is difficult to encapsulate at small scales, because the walls that retain it are too thin.

So why not use a solid version instead? “It’s a question of speed,” responds the researcher. “Ions circulate faster in a liquid than in a solid electrolyte. Yet we precisely need transfers to take place as quickly as possible, in order to provide the peak currents characteristic of micro-supercapacitors.” Their time constant is measured in milliseconds, as opposed to hours for microbatteries. To find a happy medium, French teams such as that headed by Jean Le Bideau and Thierry Brousse at the Nantes-based Jean Rouxel Institute of Materials,2 or that of Patrice Simon at the CIRIMAT,3 are developing electrolytes in the form of ion gels.

“Over the last eight years, French research in electrochemical energy storage has been structured around the French Research Network on Electrochemical Energy Storage (RS2E). With a dozen laboratories working on microbatteries and micro-supercapacitors, France boasts solid scientific know-how,” Christophe Lethien concludes. “Unfortunately, few industrial actors are interested in it, although we would love to meet with them to learn more about their needs.”

Article
The Dawn of Flexible Electronics?
Internet of Things