The New Challenges of Spintronics

The New Challenges of Spintronics

Network of magnetic structures in a vortex.
C. PFEIDERER/TUM
Share
Share
Spintronics, which uses both the electrical and magnetic properties of electrons, has greatly increased the storage capacity of hard drives since the 1990s. Today it opens up new avenues for the future of information technology.

Less than ten years elapsed between Albert Fert and Peter Grünberg's demonstration in the laboratory of the emblematic effect of spintronics—giant magnetoresistance—in the late 1980s, and IBM's launch of the first hard drives using this property in 1997. Rarely had technology transfer between basic research and mass production been so rapid, an illustration of the spectacular evolution of spintronics over the last twenty years.

Spin-electronics
Spintronics is the combination of electronics, which uses the electrical charge of electrons to transmit information, and spin, another property that is intrinsic to electrons. Spin is a purely quantum, microscopic characteristic that has no equivalent on our scale. But an electron can roughly be compared to a small magnet that is only able to move in two directions: "spin up" or "spin down." "This property was known from the early days of quantum physics, yet no-one thought of using it in electronics," points out Yannick Dappe, a researcher from the SPEC1 at the CEA in Saclay (Paris). During the 1960s, theories were developed to describe how spin currents move in magnetic materials. The development of nanotechnologies in the 1980s—and the control over metallic deposits in particular—made it possible to create materials with layers whose thickness does not exceed a few nanometers, a pre-requisite for the exploitation of electron spin. 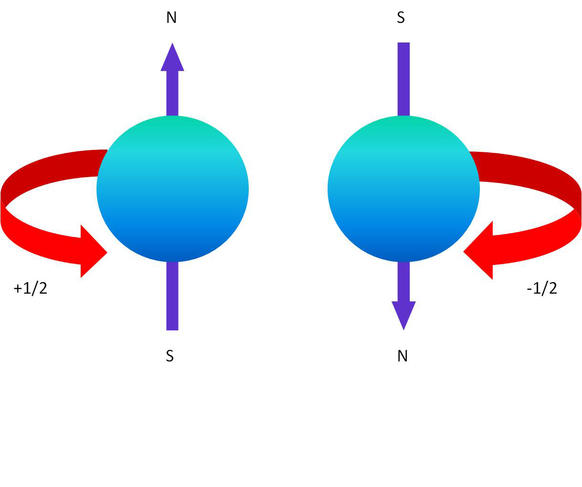 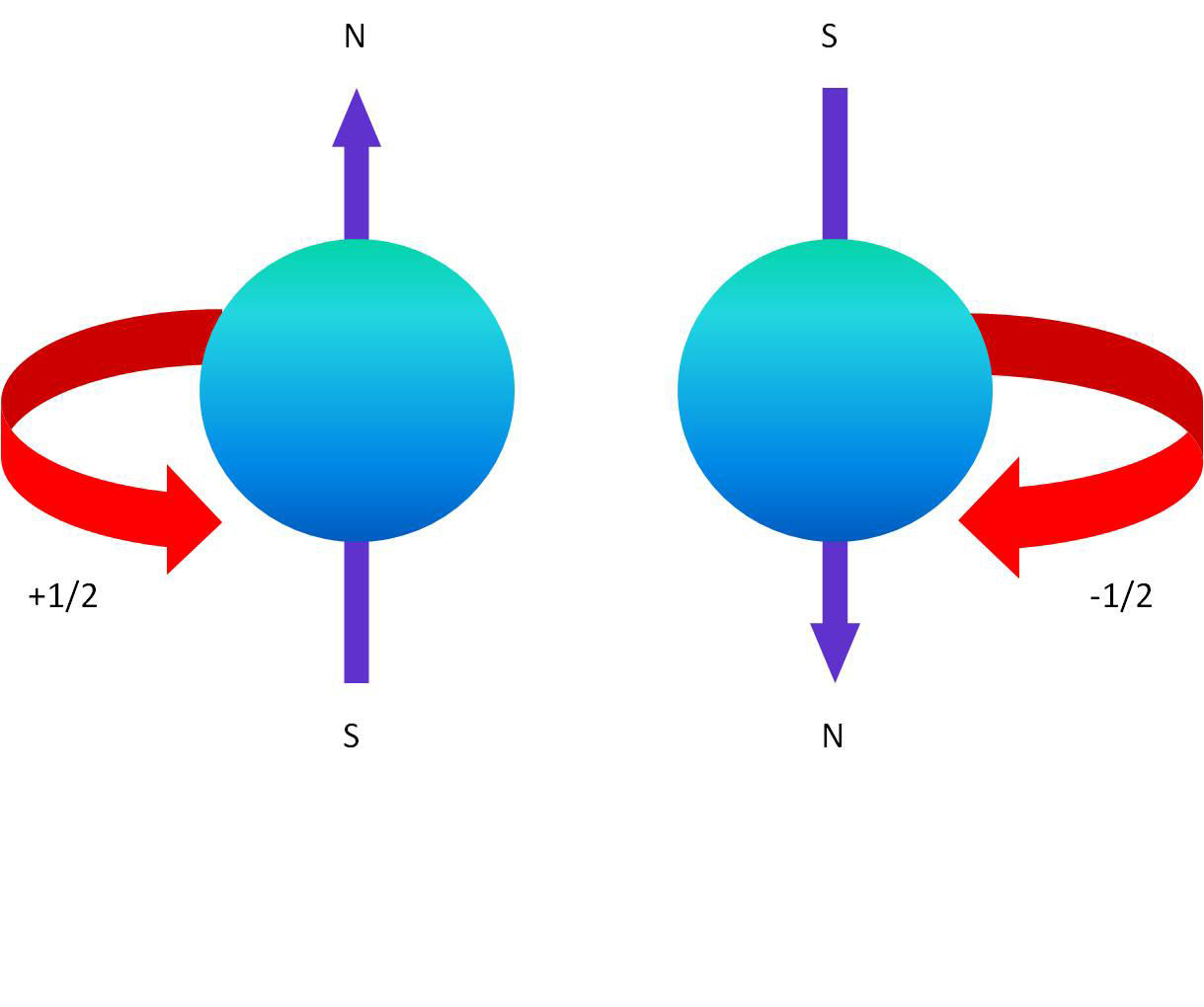 Diagram representing electron spin. In a conventional image, a +1/2 spin corresponds to a rotation of the electron on its axis, giving rise to a magnetic moment, while a -1/2 spin corresponds to the same rotation in the opposite direction, producing a magnetic moment of the opposite sign.
S. SMOGUNOV; Y.-J. DAPPE/SPEC
S. SMOGUNOV; Y.-J. DAPPE/SPEC
Share
Share

Increasing Storage Density by a Thousand
It was in such structures, consisting of a layer of normal metal such as chromium, sandwiched between two layers of ferromagnetic metal such as iron, that the effect of giant magnetoresistance was observed. The ferromagnetic materials exposed to a magnetic field align their magnetization in the direction of this field. Moreover, depending on their spin, the electrons in these materials do not encounter the same resistance. When the magnetization of two ferromagnetic layers is parallel, the electrons that propagate well in one also propagate well in the other: the overall resistance is low. On the contrary, if the magnetization of ferromagnetic layers is antiparallel, the electrons that propagate well in one propagate poorly in the other: the overall resistance is high. This difference in resistance induced by a magnetic field can be very strong, hence the name giant magnetoresistance. Its discovery earned Albert Fert and Peter Grünberg the Nobel Prize in Physics in 2007.

This effect was used in the reading heads of hard drives, whose purpose is to determine the magnetic orientation of domains that successively present themselves on the surface of the hard drive, and that represent bits of information. The sensitivity of reading heads to giant magnetoresistance made it possible to read coded information on smaller domains, and thus increase storage density by a factor of nearly 1,000. "GMR magnetic field sensors have also found other applications: they are used in cars to produce rotary and translation motion sensors, or in medical technology to analyze the concentration of molecules tagged by a magnetic nanoparticle," explains Fert. 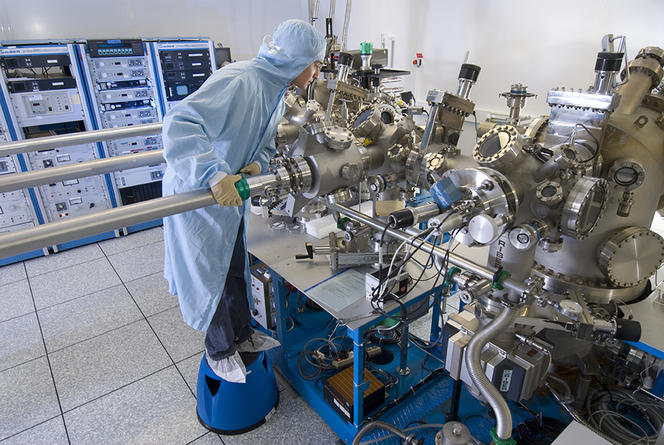 A device that lays deposits on a substrate of ultra-thin magnetic metallic layers, which when stacked up can produce giant magnetoresistance (GMR). 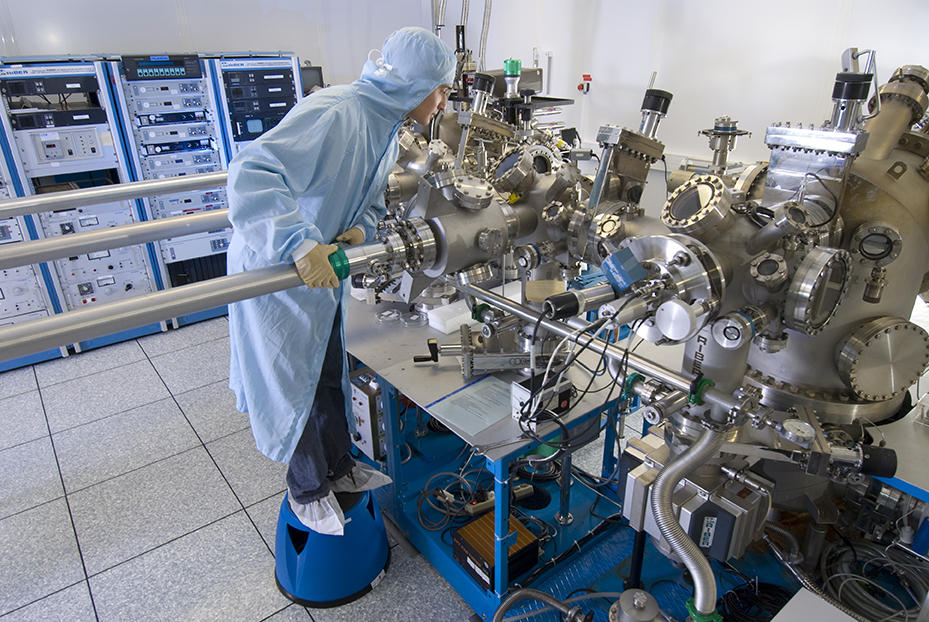 Ever Faster Memories
Although the hard drive remains the basic memory component in our computers, it has the disadvantage of being slow to access. It takes a millisecond to read a piece of information. RAM memory, which is very fast, compensates for it. However it is volatile, and must have a permanent energy supply or is liable to lose information. This is an important source of energy consumption for computers. Spintronics makes it possible to produce "magnetic random access memory" or MRAM, which is not volatile, and is both fast and energy efficient. The magnetic tunnel junctions of which they are made also consist of two ferromagnetic layers, this time separated by an insulating barrier. The magnetoresistance effect it thus greatly increased. Information can be stored in the magnetization configuration of a tunnel junction, and millions of these junctions can be networked to produce MRAM. The first generation of these components came on the market in 2006, but their insufficient storage density prevented their widespread use in computers. "However, MRAM has found applications in avionics and the space industry," Fert adds. "For unlike conventional memory, it is hardly disturbed by the radiation in the upper atmosphere."

This type of memory will break the current paradigm that separates RAM from storage memory in a computer.

The new generation of MRAM currently being developed is the most promising avenue. It integrates another major effect of spintronics, called spin transfer torque, which makes it possible to reverse the magnetization of a layer, and thus write information in the memory using a simple electrical current instead of applying a magnetic field. "This type of memory will, in all likelihood, be integrated into computers in a few years' time, and will break the current paradigm that separates RAM from storage memory in a computer," indicates Martin Bowen, a physicist at the IPCMS.2

From Storage to the Transmission of Information
In addition to these applications, spintronics is the subject of fundamental research whose horizons have diversified. On the one hand, researchers are forever trying to push back the frontiers of "conventional" spintronics—used in magnetoresistance devices—which consists in placing different materials in the path of electrons in order to influence spin circulation. "Instead of using layers of normal metal, as in the earliest devices, or insulating barriers, as in magnetic tunnel junctions, we can also test other materials, such as assemblages of molecules, in order to filter the electrons according to their spin," explains Dappe. This is the principle of molecular spintronics, on which the scientist is conducting theoretical research with his SPEC colleague Alexander Smogunov. Materials such as graphene have already been widely studied. Rather than just storing information, spintronics could also help transmit it. To do so, high-performance spin-polarized current sources must be developed. "This requires understanding how dissimilar materials such as a ferromagnetic metal and molecules share their electronic charge when they form an interface," Bowen points out. "Another element is to miniaturize these concepts at the nanoscale, for example by using the electronic properties of structural defects, as when the absence of an atom creates a gap."

New ways of manipulating spins have also emerged in recent years. One of these is spin orbitronics. The idea is to use a relativistic effect, the spin-orbit coupling, which is quite significant in heavy metals such as bismuth or platinum. Among other paths, this domain opens the possibility of storing and transporting information by using skyrmions. "These are little spin knots measuring a few nanometers, which can help memorize information, like the beads in an abacus. We can then move these skyrmions along a track to a nanosensor to read the information coded in a train of skyrmions," explains Fert, whose team at the CNRS-Thales joint research unit focuses on this field of research.

While the production of components based on semiconductors is beginning to reach its limits in terms of miniaturization, spintronics has gradually imposed itself as a complementary technology capable of transcending some of these limits and, in the medium term, probably taking over from conventional electronics. In addition to the new components it offers, such as MRAM, spintronics could help define new information architectures—in other words, new ways of computing. Neuromorphic electronics, for example, draws inspiration from the functioning of the brain, and in particular synapses, which can transform according to the information they receive.