Installation of underwater sensors in the Mediterranean Sea.
Bruno HESSE / OOB / IES / CNRS Photothèque
Share
Share
Whether they track animal populations, monitor air quality, or optimise our energy consumption, sensors are increasingly being used to study the environment. A great deal of research has been conducted to improve their sensitivity, independence, and communication.

A genuine extension of researchers, sensors serve as their eyes and ears, from the surroundings of their laboratory to the most remote ecosystems. Nothing escapes these electronic devices that are increasingly prized in the study and conservation of the environment. They can monitor the temperature of a desert environment, or the journey of migratory birds above the oceans.

Installed on electronic chips, sensors operate thanks to a transducer: an element that transforms the targeted physical value into another measurable. This role is often played by electrical voltage, although combinations are limited only by technology and the imagination of researchers. Similarly, the precision of a sensor’s measurements depends on the needs and constraints of each scientific mission. The device can simply detect a presence, with no further detail, or warn of the passing of a threshold, for example of pollution.

“A sensor is dedicated to a more precise situation than measurement instruments,” explains Corinne Dejous, a professor at Bordeaux INP and member of the Laboratoire de l’Intégration du Matériau au système (IMS).1  “When portable, it can be deployed in a network, with meshes that are more or less tight. Research is in search of sensors that are ever smaller and independent, that are wireless and consume less energy.” The development of wireless technologies and the Internet of Things has shaken up the field.

Dejous mentions initiatives near Bordeaux: sensors for studying and limiting the energy consumption of campus buildings, or for monitoring the proper growth of grapevines. Each time, the entire battery of small electronic instruments is connected by a network. The LoRa telecommunications protocol2 is especially prized for its range of multiple kilometres, including in the presence of obstacles, as well as for its low energy use.

Dejous uses bioelements and micro-organisms like bacteria in her research. “The antigen/antibody reaction and molecularly imprinted polymers function like a lock/key system when they come in contact with the targeted material.” These chemical or biological layers can detect the presence of heavy metals. For example, strains of Escherichia coli are “stressed” in their presence, even in very slight quantities. A sensor for mechanical rigidity reports the resulting change in consistence in real time, thereby transforming the targeted phenomenon into a measurable value. 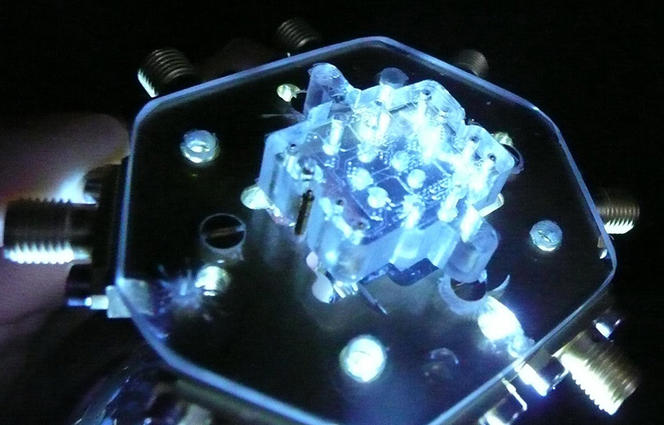 Surface Acoustic Wave biodetection platform, associated with a microfluidic cell. This sensor is a prototype that has served as a basis for Corinne Dejous’s research in the detection of microorganisms and bacteria. 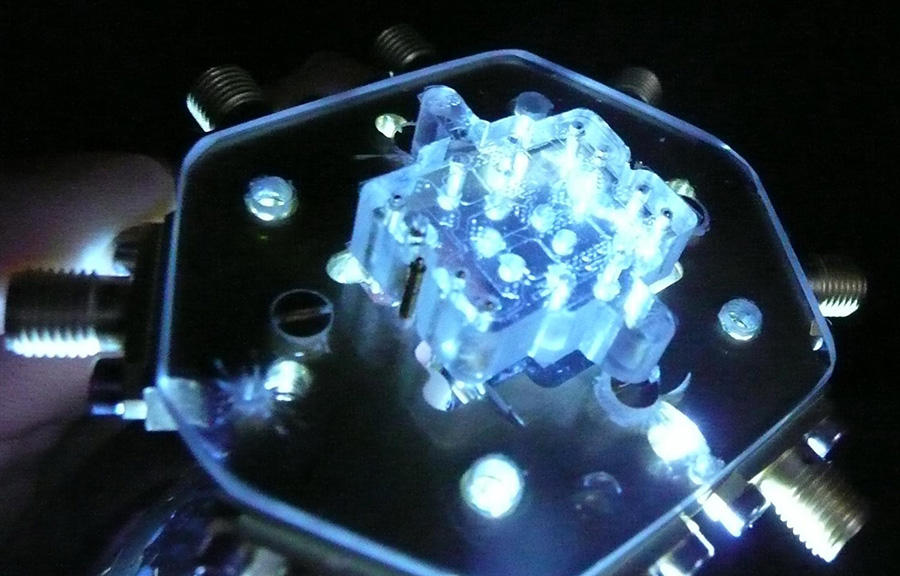 “In similar fashion to bacteria, we and our French and Tunisian collaborators are also designing sensors that use spirulina, a family of cyanobacteria that immobilizes heavy metals,” Dejous adds. This research was originally connected to neutralizing poison gas, but it now serves to monitor air quality and detect industrial pollution. The study of other types of micro-organisms or recognition compounds could extend this range of sensors. “A critical issue is to find materials with extremely specific properties. As each application is often a small niche, we face problems of reproducibility, as well as the complexity of the phenomena that are produced between different layers.”

For Philippe Combette and Fabien Pascal, professors at the université de Montpellier and researchers at the Institut d’électronique et des systèmes (IES),3 other difficulties arise. They have studied prototypes for the monitoring of lagoon areas in the Montpellier region. These low-cost pollution sensors warn when they detect certain pollutants, although “they become relatively expensive when we aim for a certain degree of precision,” explains Pascal. “Or we can increase system size, but then we have to trade off portability.” The dilemma increases depending on the number of environmental constraints, which are extreme when studying oceans.

Pascal co-authored an article on sensors in marine environments in Inventer l’avenir. L’ingénierie se met au vert,4 a book to which Dejous also contributed. Since they absorb 30% of anthropic emissions of CO2 and 80% of excess heat, oceans are central to the mechanics of global warming. Since laboratory-based analyses are no longer sufficient, they are now bolstered by the deployment of sensors in the high seas. This equipment must be adapted to the specific constraints of the open sea, such as salinity, difficult access for maintenance, or clogging up by seaweed and shellfish.

Listing the elements that sensors detect in the water alone would take multiple pages. Aside from traditional values such as luminosity and temperature, they inform researchers regarding the quantity and types of plankton, levels of dissolved gas, the presence of pollutants, and turbidity, which is to say how cloudy the water is. Combette worked on the BO²N project (short for Boat Ocean Observers Network), with colleagues from the IES and the companies Out-There and Synox. This project installed temperature and salinity sensors on sailboats and private ships, which take measurements along the itineraries travelled by pleasure boaters. Many sensors do not require any particular technical requirements in order to be moved, installed, or maintained, which opens the way for such initiatives in participatory science. The data is then automatically transmitted to the laboratory for processing.

Researchers are trying to reduce the cost and increase the independence of their sensors, something that increasingly occurs through the recovery of energy. Photovoltaics and piezoelectricityFermerThe production of electricity through mechanical stress are particularly prized, while the seebeck effectFermerThe production of electricity through a temperature gradient applies especially well in an ocean environment. Such projects nevertheless must contend with their overly specific nature. “Environmental sensors are not of interest to industry if demand does not reach fairly large volumes,” Pascal laments. “We almost end up doing things on a case-by-case basis for each application, which limits the possibility of mass production, and hence of cost reduction. Among researchers and colleagues working on ecology, we understand one another. But developing sensors and on-board systems in the behavioural ecology of primates, for example to equip a few dozen individuals in Gabon, does not interest industry. It could, at a push, interest start-ups, but at prices that limit the number of sensors, and hence the scope of the experiment.” For Dejous communication is essential to bringing together the researchers who develop sensors with the people who use them and produce them. “Colleagues approach us after a publication or thanks to word of mouth. The same is true for industrial actors.”

Creating sensors is not the only research focus in the field. As a corollary to the enlargement and increased density of sensor networks, scientists sometimes end up with an enormous amount of information to process. “We gather as much data as possible, which we will process afterwards using machine learning algorithms,” explains Thierry Antoine-Santoni, Associate Professor at l’université de Corse, member of the laboratoire Sciences pour l’environnement,5 and co-author of Inventer l’avenir. “For a long time we pursued a highly technical approach, shut away in our laboratory. Then we went into the field to meet the local population and farmers in order to develop solutions with them, people who are not necessarily attuned to the digital world and research.” This clash of cultures gave rise to many applications in Cozzano, a hamlet of 280 inhabitants in the middle of Corsica. 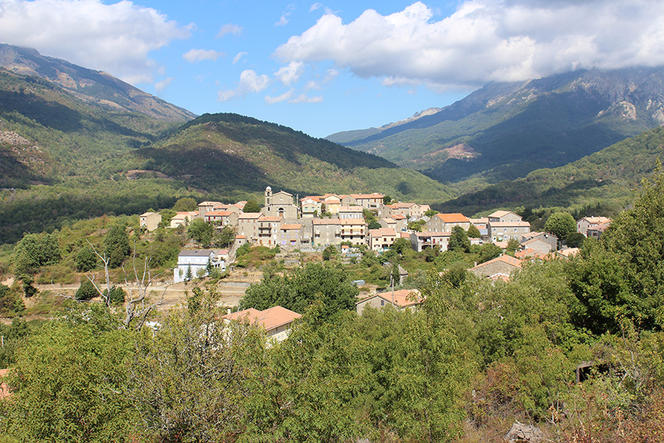 The “smart village” of Cozzano, a hamlet of 280 inhabitants in the middle of Corsica. 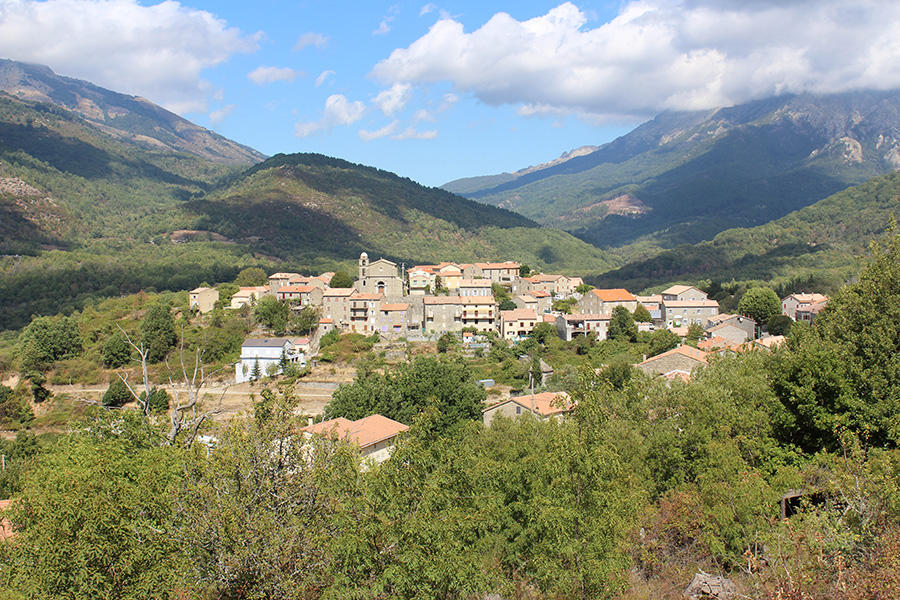 Aside from monitoring the quality of the air, water, and soil, sensors are now present out in the field, in an effort to help farmers. In conjunction with algorithms, they will help one of them anticipate the blooming of saffron flowers, while a pig farmer will now know the location of his animals, which are left free on a vast territory of 500 hectares. “Smart villages raise many questions, and present us with technological obstacles that must be overcome,” Antoine-Santoni says with excitement. “A fascinating challenge from a scientific point of view!”

Algorithms also optimize the topology of the network and the energy consumption of sensors, identifying the best moments for them to switch to standby mode or to transmit their information. Here once again, faced with isolation and a very hilly landscape, LoRa telecommunications technology maintains the entire network. This experiment has generated new ideas arising from the distinctive features of Corsica. “We are planning to equip a drone with a LoRa antenna, which will make it possible to follow fire-fighters during mountain fires where GSM networks no longer work.” 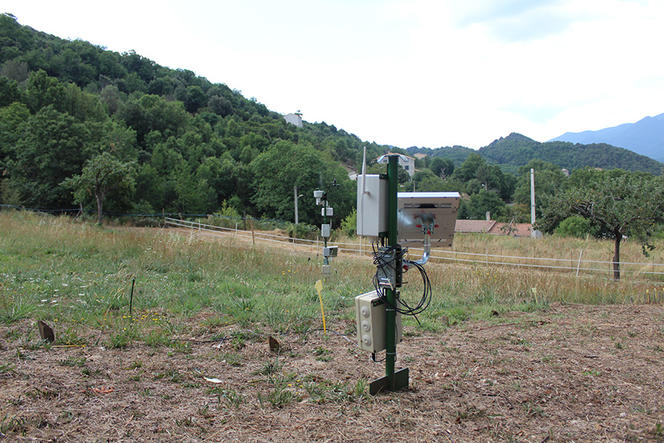 This saffron field in the village of Cozzano is equipped with a weather station and various sensors. Text boxes 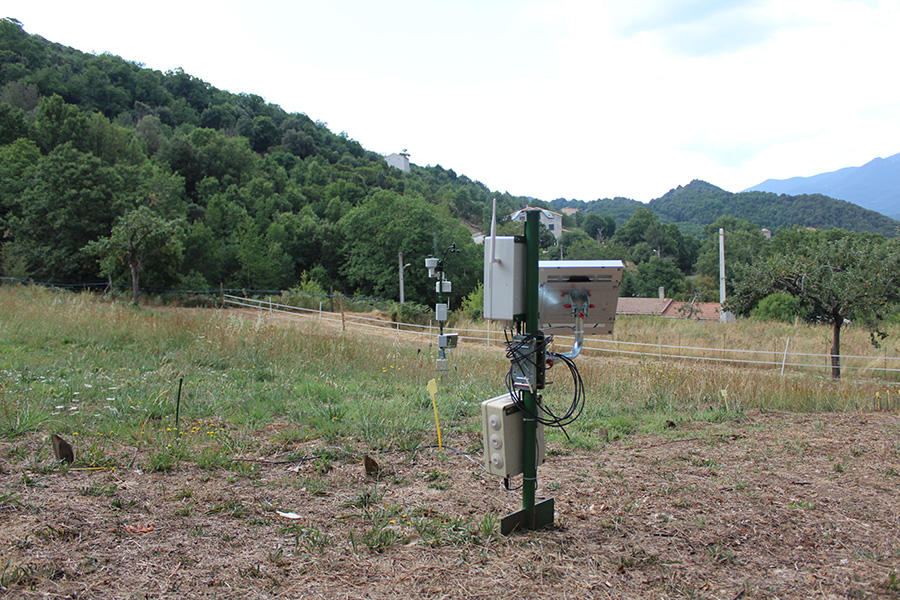 Better and better adapted to their growing group of missions, sensors offer support to researchers who are engaged in environmental challenges. While questions of cost continue to slow their massive deployment, these reliable, communicating, and independent systems continue to extend the five senses of scientists in the field.

See author's bio
The Paris Agreement Must be Complied with UrgentlyPrevious
Vaccine Hesitancy: is France the World Champion?Next

Article
First-ever physical model consistent with the history of the...
Engineering