The mechanics of sea ice

The mechanics of sea ice

Fragmented sea ice off the northeast coast of Greenland, between the settlement of Ittoqqortoormiit and the Daneborg marine facility.
Erwan AMICE / LEMAR / CNRS Photothèque
Share
Share
Major climate models are based on a series of more specific overlapping models that are in constant interaction with one another. However, those describing the behaviour of sea ice have proved to be obsolete. As a result, researchers are now developing new ones, using concepts derived from mechanics.

From 1994 to 2017, our planet lost 28 trillion tonnes of ice. This catastrophic melting is  driven by climate change, and takes various forms. Although sea ice accounts for only a small part of this loss, especially compared with the much thicker ice sheets, its decline significantly affects the climate at high latitudes, since it acts as an insulator between the ocean and the atmosphere.

Moreover, sea ice, which is made up of frozen seawater, does not have the same characteristics as glaciers or permafrost (ground that is permanently frozen). It is also subject to specific forces, such as winds and ocean currents, which cause it to drift, deform and fracture. The degradation of sea ice therefore takes place in a different way. “If you address the problem without taking into account the dynamics and mechanics specific to frozen seawater, there is no way you can understand the phenomenon,” says Jérôme Weiss, CNRS senior researcher at the Institute of Earth Sciences (ISTerre)1 and CNRS Silver Medal laureate in 2021. “As a result, you can end up underestimating the extent and evolution of sea ice degradation, whether over a few years or several decades.” 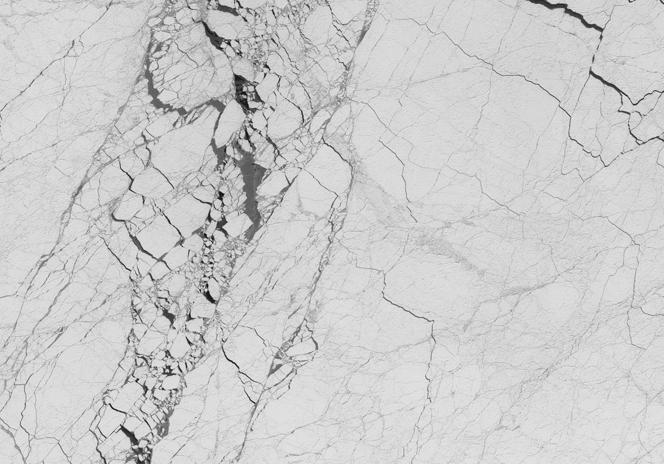 SPOT satellite image (in the visible spectrum) of a section of Arctic sea ice, taken in April 1996 in the north of the Canadian Arctic Archipelago. A freshly formed fracture can be clearly seen, within which the sea ice is highly fragmented, facilitating large deformations all along the fault. 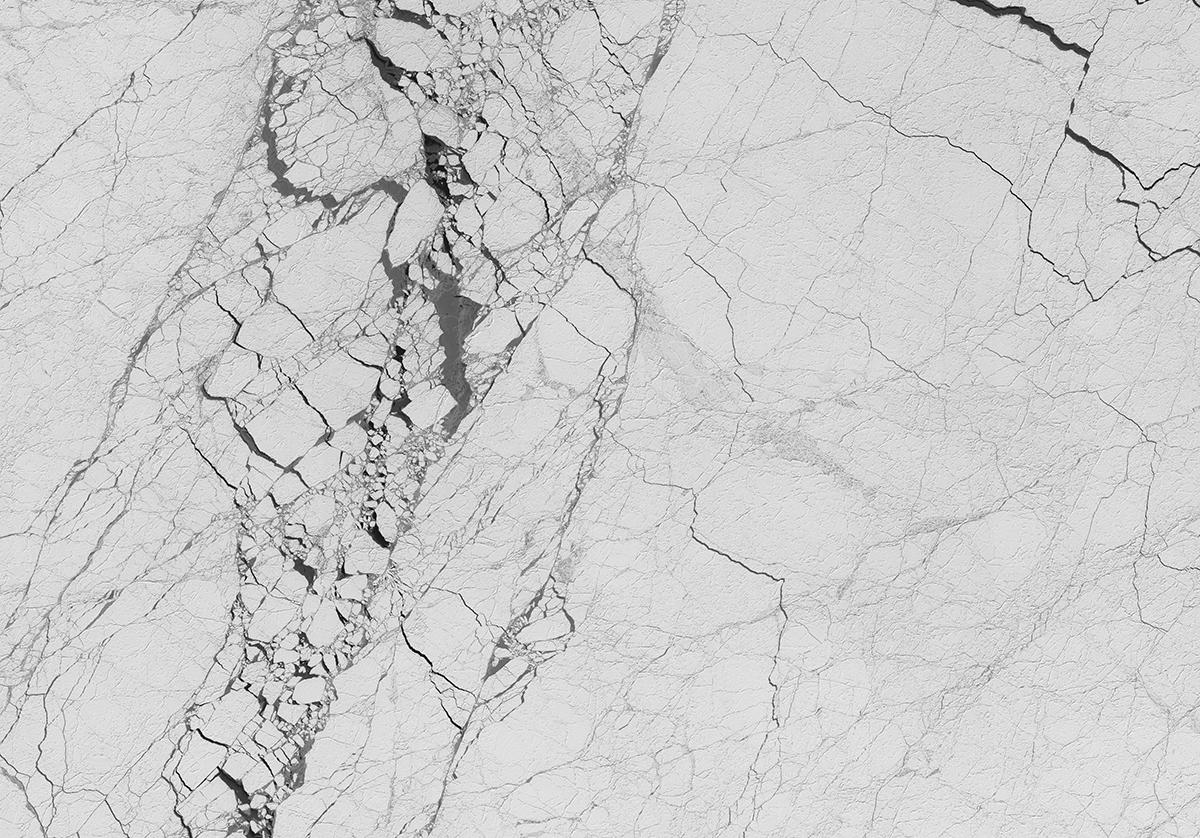 SPOT satellite image (in the visible spectrum) of a section of Arctic sea ice, taken in April 1996 in the north of the Canadian Arctic Archipelago. A freshly formed fracture can be clearly seen, within which the sea ice is highly fragmented, facilitating large deformations all along the fault.
SPOT image
SPOT image
Share
Share

Major climate models are based on a whole series of more specific models that interact with one another. These can represent ocean currents, the wind, the reactions of pollutants and greenhouse gases in the atmosphere, etc, and also, therefore, the mechanisms that are characteristic of sea ice. “Unfortunately, the standard rheological model for sea ice doesn't work properly, because it isn't based on the right physics,” Weiss explains. “However, it's one thing to say that, and quite another to develop an alternative. Also, it should be pointed out that the people who designed these standards in the 1970s had neither the data nor the numerical resources that we can now access.”

The evidence used to study the behaviour of sea ice is obtained from two principal sources, both of which are the result of scientific campaigns often made more difficult by the immensity and extreme conditions of the Arctic and Antarctic. The first method is to use buoys attached to the sea ice, which transmit their GPS coordinates as they drift with it. They also record weather data such as air temperature and wind speed. A second technique, used less frequently, is to place stress sensors into holes drilled into the ice to record its compression and deformation. At the same time, Weiss and his colleagues at ISTerre are carrying out seismological studies but their work is hampered by the need to deploy expensive, fragile instruments under the harsh conditions of the Arctic. 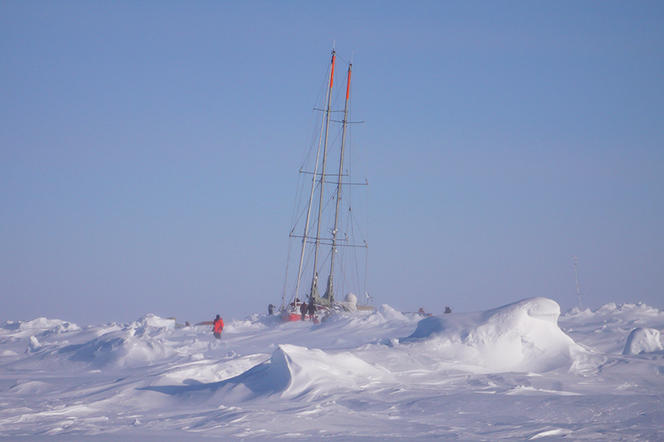 The schooner Tara embedded in the Arctic sea ice during its transpolar drift in April 2007. 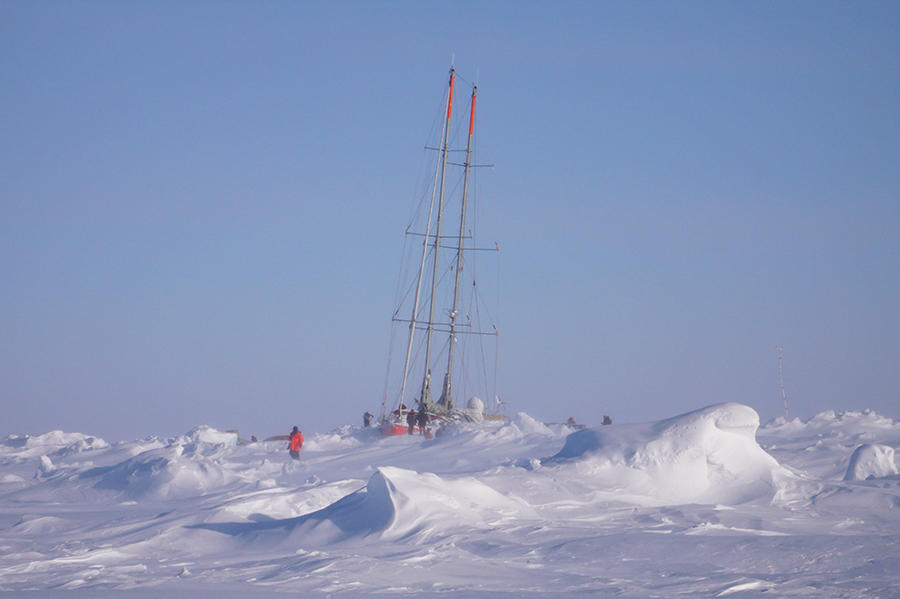 Until now, the best information on the mechanics of sea ice has been obtained by scientists on board the schooner Tara, originally used for polar exploration under the leadership of Jean-Louis Étienne. The vessel sailed north from Siberia with the aim of deliberately becoming trapped in the ice, and then drifted with it, reaching the Fram Strait separating Greenland from the Norwegian archipelago of Svalbard a year and a half later. 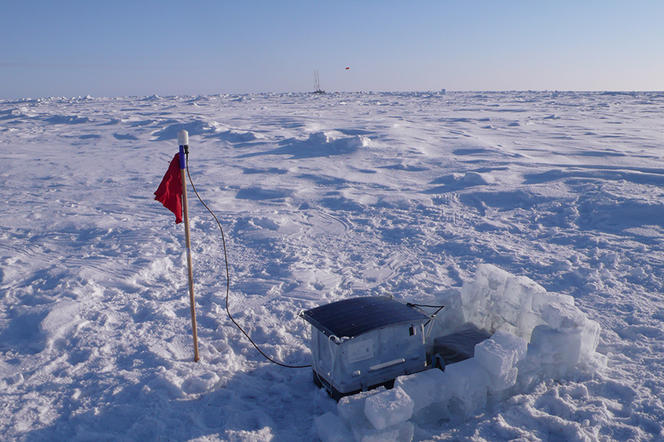 GPS beacon and seismological station installed on the Arctic sea ice in April 2007, in the vicinity of the schooner Tara (visible in the distance). These instruments were used to monitor deformation as well as fracturing (due to ice tremors) of the sea ice. 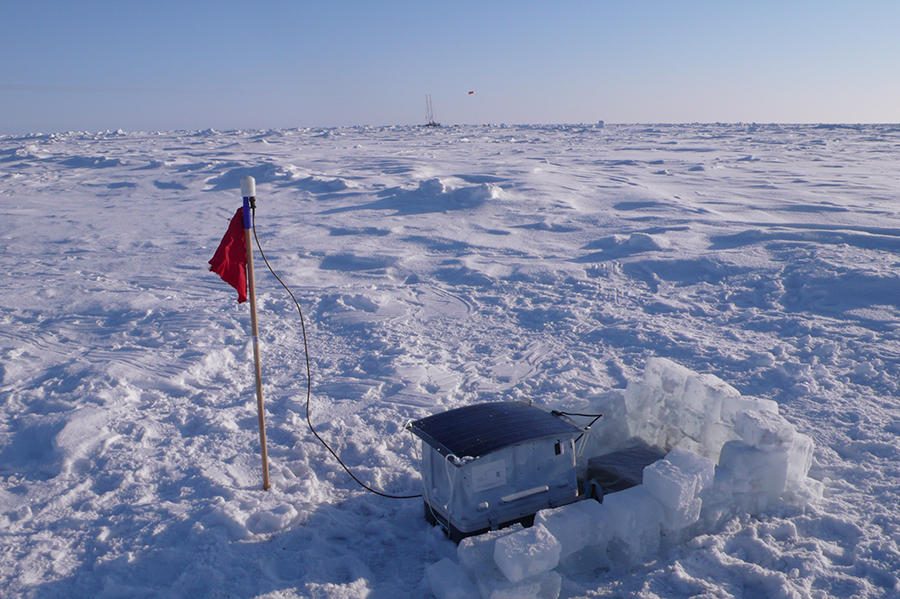 GPS beacon and seismological station installed on the Arctic sea ice in April 2007, in the vicinity of the schooner Tara (visible in the distance). These instruments were used to monitor deformation as well as fracturing (due to ice tremors) of the sea ice.
Jean-Philippe Métaxian
Jean-Philippe Métaxian
Share
Share

The teams on board the ship were able to remain in close proximity to the sensors and ensure their maintenance, which enabled them to obtain more information than if these devices had been left at the mercy of a hostile environment. “The basic principle of solid mechanics is to study the relationships between the stress applied to an object and the deformations it undergoes, and thus establish a rheological model,” Weiss explains. “Combining different databases collected in the field helps us to do just that.” The way in which the beacons disperse over time makes it possible to determine a real deformation field. This information then has to be put together in order to develop a workable rheological model.

“I am not basically a modeller, so I had to work with mathematicians to overcome certain tricky problems,” Weiss points out. “It was with the help of various PhD students that we were able to develop our first model of sea ice mechanics, tested and validated by field observations.” However, it has not yet been implemented in climate models, due to numerical and conceptual problems. Researchers are often hampered by the amount of computing power required for the most detailed simulations. They nevertheless have to comply with the resolutions and constraints of the models into which they are to be inserted.

Whereas glaciers and polar ice sheets flow under their own weight very slowly and relatively smoothly, both spatially and temporally, sea ice is much harder to model. It is constantly criss-crossed with fractures that open and close again. Their opening forms channels of open water called leads, which can then refreeze, forming new ice that is thinner and displays different properties from that around it. The closure of these leads and the compression of ice floes can also produce ridges several metres wide and thick, well known to polar explorers, who sometimes make long detours to avoid them. 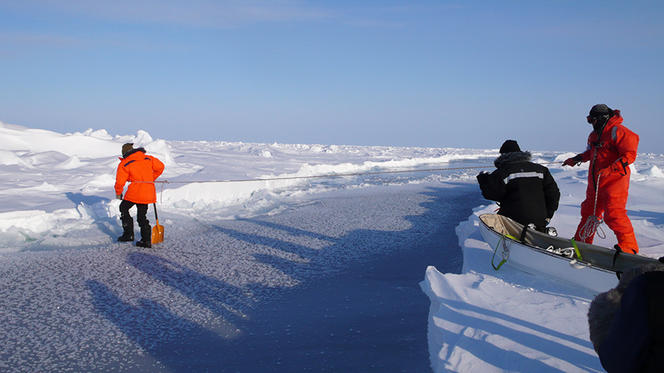 Image showing fractures (known as “leads” in specialist terminology) opened within the sea ice near the schooner Tara in spring 2007, showing partial refreezing of the lead. 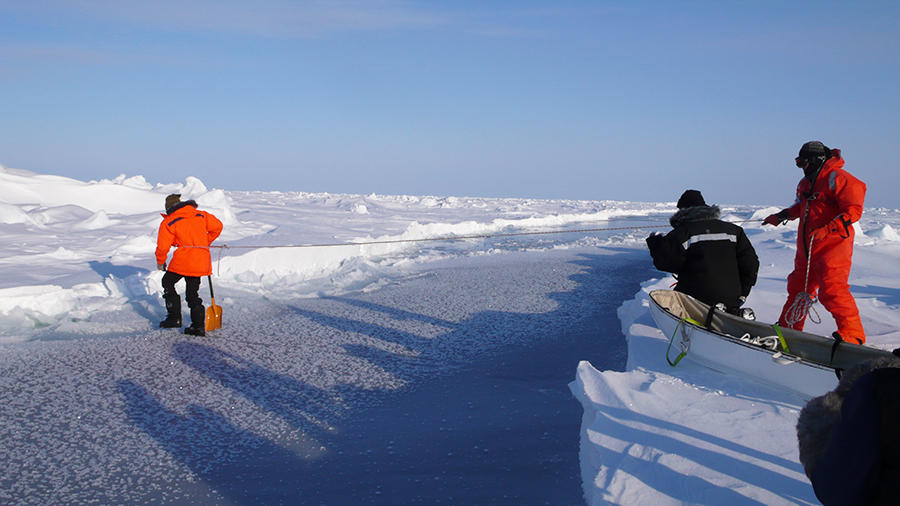 “Exact modelling of the effects of fractures and pressure ridges would have required an unrealistic amount of computing power,” Weiss continues. “So we chose to use damage mechanics, where damage is defined as the degradation of the elastic properties of a material.” The deformation of the sea ice is interpreted as the average softening of it, where the softest, and therefore most damaged, zones correspond to fractures. These locations are unable to withstand the forces exerted on the sea ice, and redistribute them over the surrounding area: as a result, the fractures continue to propagate.

Towards implementation in major climate models

“What we're currently producing is consistent with satellite and field observations, with a resolution of around one kilometre,” Weiss rejoyces. Two of his former students have recently obtained funding to the tune of $10 million from an American foundation, with a view to developing a new model that can be directly implemented in climate models. In the meanwhile, the results of this work will also be used to address issues other than the impact of climate change. Indeed, Weiss heads the fault mechanics team at ISTerre, which focuses on the Earth's crust and plate tectonics rather than on ice melting. These fields were key in understanding the mechanical parameters of sea ice degradation, and are in turn informed by these new findings, since the two subjects have much in common. 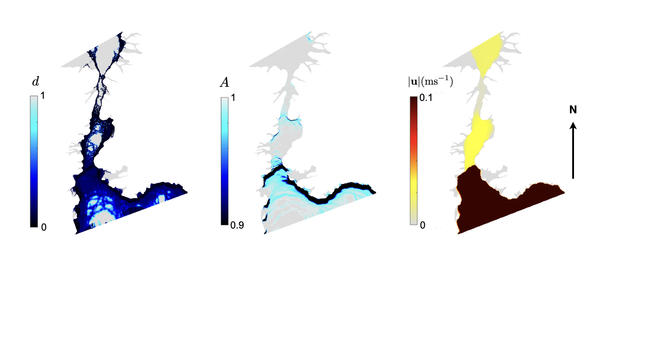 Modelling of damage (left), sea ice concentration (centre) and drift speeds (right) within the sea ice in the Nares Strait separating Canada’s Ellesmere Island (to the west) and northern Greenland (to the east), derived from a new “Maxwell-Elasto-Brittle” type rheological model. 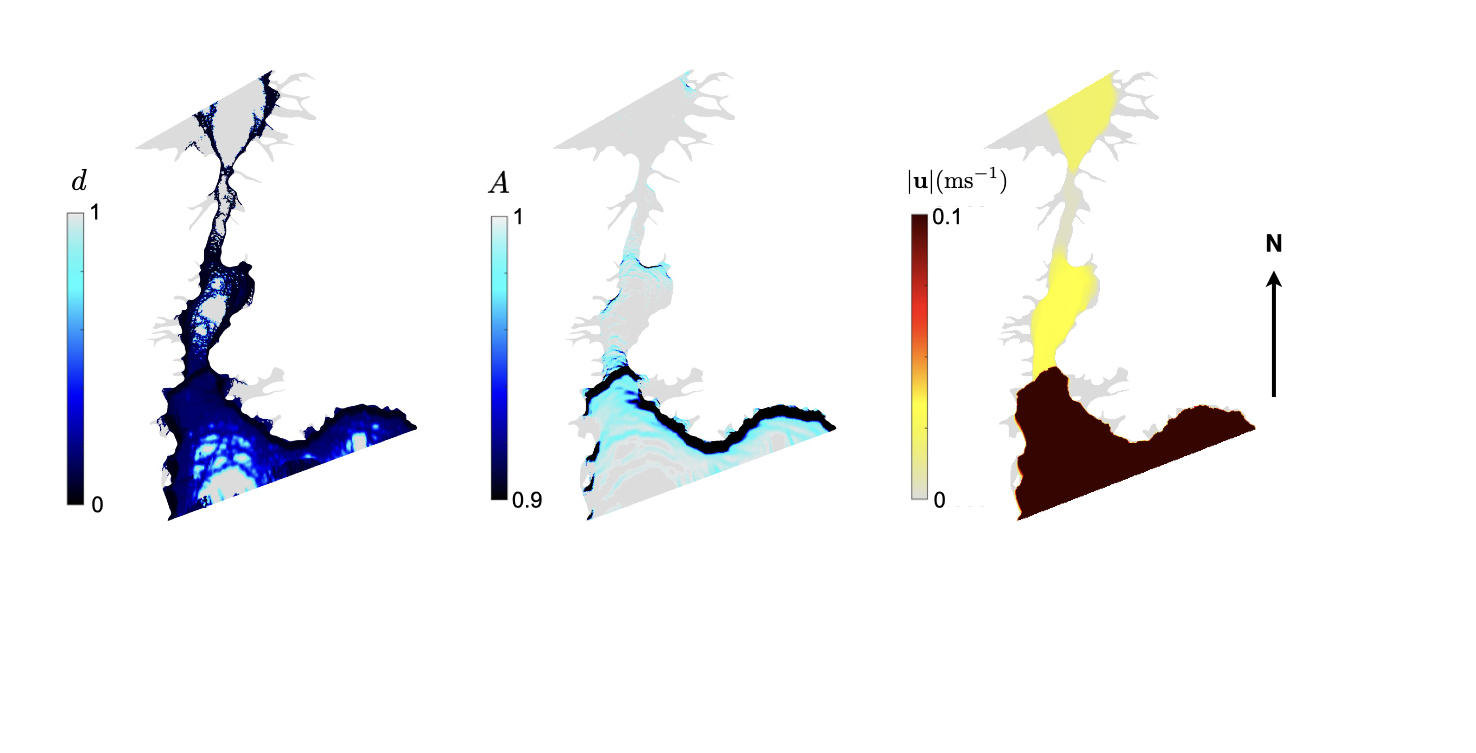 “The main difference lies in the order of magnitude of the speed: in one month, sea ice can move as far as a tectonic plate would in several million years,” Weiss explains. “The advantage is that this allows us to study processes in sea ice that are too slow to be observed in tectonic plates.” Since then, the team of scientists has been trying to adapt the modelling of sea ice to that of tectonic plates, and in particular to the process of subduction, when oceanic plates dive beneath continental plates.

Meanwhile, efforts continue to ensure that models of sea ice degradation and melting can be integrated into major climate models, which should help refine predictions about the catastrophic effects of climate change.

Article
First-ever physical model consistent with the history of the...
Geophysics