The Yersin, the Monaco Explorations program's floating laboratory.
T. AMELLER
Share
Share
Monaco Explorations' research vessel Yersin has set sail for a round-the-world mission to study the state of the world's oceans, terminating in 2020. Among a host of scientific projects, it will carry out a survey of marine megafauna using environmental DNA, a new method for evaluating biodiversity.

The Yersin has just set out on a voyage around the world that will last three years—as long as Magellan's expedition five centuries ago. The reason why an ultra-modern vessel would take as much time to circumnavigate the globe as a sixteenth-century carrack is simple: the Yersin is a floating laboratory and its mission is above all scientific.

Named after the bacteriologist and explorer Alexandre Yersin,1 the ship set sail from Monaco on July 27, 2017. The Principality, which has provided continued support for oceanography ever since the reign of Albert I (1848-1922), is overseeing the international scientific projects on board the vessel. The expedition will include more than one hundred stopovers, distributed across nine regions: Macaronesia,2 the Caribbean, the Galápagos Islands, Polynesia, the Coral Sea,3 the Coral Triangle,4 the western Indian Ocean, the Black Sea, and the Mediterranean.

While the much-publicized and highly successful campaigns of the research schooner Tara have focused on the study of plankton—and now coral—Monaco Explorations' Megafauna project5 will, as its name suggests, study the ocean's largest inhabitants, marine megafauna.  The term encompasses marine mammals, sharks and bony fish. The researchers, who will take turns on board, will assess the state of conservation of these species, which are especially vulnerable to overfishing and climate change.

Using destructive methods to sample specimens is, fortunately, a thing of the past. Instead, the weapon of choice for the scientists on the Yersin will be environmental DNA.

We look for traces of DNA left in the water by megafauna, for instance through their scales or faeces.

Developed around ten years ago, this new technique is revolutionizing the assessment of marine biodiversity. Sébastien Villéger, a researcher at the Marine Biodiversity Exploitation and Conservation (MARBEC) laboratory6 and deputy head of the expedition, explains that the massive increase in the power of DNA sequencing means that it can now be used out at sea.

"We look for traces of DNA left in the water by megafauna, for instance through their scales or faeces," he explains. "We filter the water and then sequence the genes it contains, assigning them to known species. Just as for forensic scientists, a sample of DNA is not enough to identify the suspect if it is not already in your database."

The researchers on the Yersin will not only know which species are present but will also sequence targeted regions in the genome of as many taxa as possible, using tissue samples from captured individuals. The bigger the baseline, the easier it will be for the team to perform a detailed characterization of the species, populations and even individuals.

The samples will be prepared and partially sequenced on the Yersin so as to collect the maximum amount of raw data, although the bioinformatic analysis will be carried out back on land after the data has been transferred to servers. The presence of specialized researchers who will filter the water, immediately extract the DNA, and identify the species should guarantee high-quality sampling.

There are further reasons for analyzing environmental DNA. Stéphanie Manel, senior researcher at the CEFE7 and deputy head of Monaco Explorations is interested in what genetics may reveal about the health and resilience of ecosystems.

By comparing the same species at different sites, we can  assess the degree of isolation—and therefore vulnerability—of certain ecosystems.

"I study genetic connectivity," she explains. "By comparing the same species at different sites, we can look for patterns in the distribution of megafauna. We can then assess the degree of isolation—and therefore vulnerability—of certain ecosystems. In order to survive and adapt to threats such as climate change, they need diversity."

For instance, neighboring regions with abundant aquatic life can communicate if ocean currents or reefs allow. Geography also plays a role: the researchers hope to find out whether seamounts act as barriers or as corridors for species. Manel will have a chance to look into the issue when she joins the ship in spring 2018, during its stopover in the Galápagos Islands.

However, the Megafauna project will not solely rely on genetics, but will also be using a range of other techniques. Studying environmental DNA reveals which species are present, but provides no information as to their abundance. Although many dives are planned, underwater observation of an ecosystem presents a number of challenges, such as divers' autonomy, restricted visibility, the difficulty of finding one's way in three dimensions around large volumes of ocean water, the great depths involved, etc.

Villéger will also be in charge of testing the cameras that will film the reefs twelve hours a day. He will be joining the ship in December 2017, when it reaches the Caribbean. "Sharks flee from divers due to the noise of the bubbles," he says. "It makes it difficult to sample species accurately if only sedentary fish remain while the others swim away."

The recordings will also make it possible to obtain snapshots of reefs, which can sometimes change extremely rapidly. The scientists will thus be able, at a later date, to make use of the video and genetic data collected, for example to solve issues that have not yet arisen.

"Video has many advantages," Villéger admits, "but it should not be used to displace the workload. We don't want the diving time saved to be replaced by hours spent in front of a screen, counting species one by one. We are working on algorithms that will alleviate our task by identifying fish automatically." 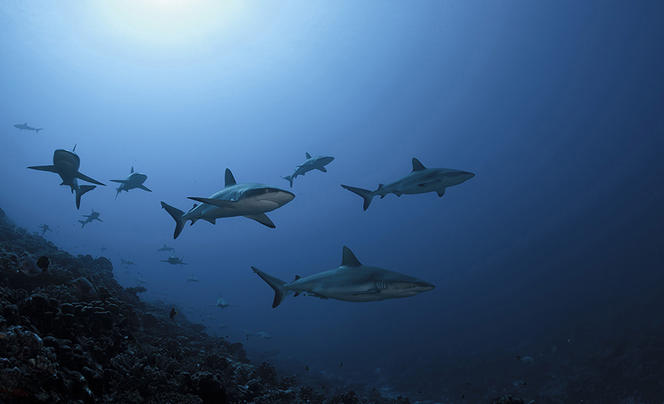 A group of the grey reef shark "Archiconnus amblyrhynchos." Sharks are a particularly vulnerable and endangered species on a global scale. 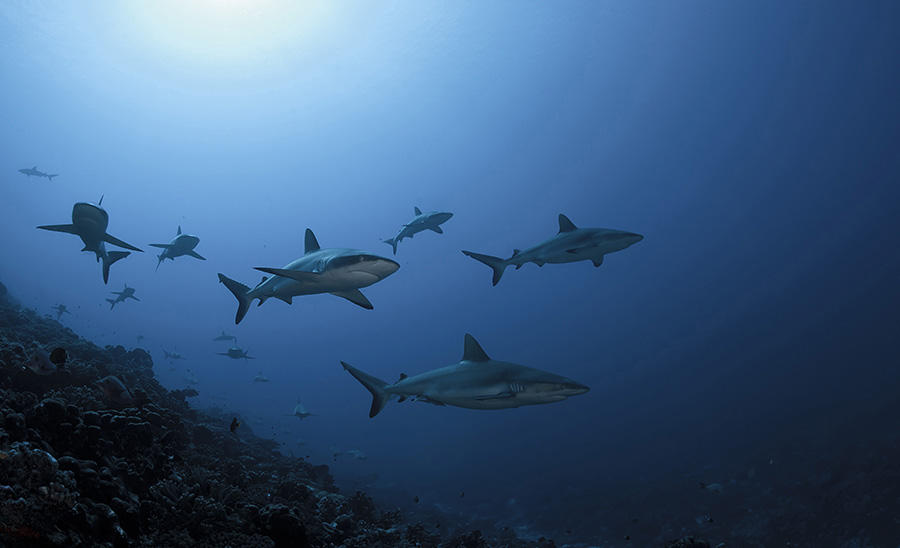 The work carried out on board the Yersin will give scientists a better insight into the life of reefs, at a time when these ecosystems are facing increasingly rapid change and ever-greater threats. An expedition of this kind will help researchers to obtain a broad overview and thus identify critical issues for the diversity and abundance of marine megafauna.

"As a general rule, testing new hypotheses in marine ecology is difficult due to the operational constraints," Villéger points out. "The Yersin's route and resources therefore represent a unique opportunity."

"With the progress in genomics, sequencing is no longer a problem compared with sampling," Manel adds. "Large-scale expeditions enable us to sample and observe fish in unexplored, undisturbed regions, where we're hoping to discover previously unknown, hidden biodiversity."

With forty people on board, the Yersin is self-sufficient for around fifty days. A number of international teams will take it in turns to work on the 80-meter long vessel, in three-month shifts. The three years of continuous scientific work scheduled should considerably enhance existing knowledge of the ocean—and therefore help to protect this extremely vulnerable 70% surface of our planet.

Article
Sea monsters at the time of the dinosaurs
Oceanography

Article
Shells, the Sentinels of the Ocean