A bull shark is released after being implanted with an acoustic tag that will follow its movements in an anthropised area.
Thomas VIGNAUD
Share
Share
Dividing his time between France and Polynesia, the ichthyologist Éric Clua devotes his efforts to studying sharks, both to preserve their populations and to help prevent attacks on humans.

You are a research professor at the EPHE1 and you study marine biodiversity at the Centre for Island Research and Environmental Observatory (CRIOBE).2 How did you become interested in sharks?
I began this long journey as a veterinarian, like my father, who also took me diving from the age of four. I later gave up veterinary practice in favour of economics. Then I did my military service in the Caribbean, and decided that I wanted to work closely with nature. So I pursued a career in development, focusing on marine issues. I earned a PhD in ichthyology as part of a mission for the CRIOBE in New Caledonia French overseas territory in the South Pacific, before taking a job as a project manager. Ultimately, my proclivity for precision, reasoning and demonstration led me to become a full-time researcher at the CRIOBE laboratory in French Polynesia. At first, I specialised in the study of sharks because I was fascinated by their dangerous nature, their lethal efficiency. But I also started to feel empathy for them as despised animals that don’t deserve their bad reputation. My atypical background helps me approach my subject from different points of view.

Attacks on humans give a negative image of sharks. How does science perceive these sometimes fatal encounters?
There are only four species that pose a genuine mortal risk for human beings: great whites, tiger sharks, bull sharks and oceanic whitetip sharks. Like my fellow scientists, I learned a great deal about sharks in my ichthyology training. At the same time, due to my experience and feeling as a diver, I was not happy with the idea that sharks are like machines mainly ruled by instinct. I had observed significant differences among individuals within the same population. We gradually realise that sharks have personalities and can have very different behaviours within a single group.

We then worked with my Norwegian colleague John Linnell, who specialises in attacks on humans by terrestrial animals like bears and wolves. He had shown that such incidents were more often due to the individual attitude of a predator rather than a purely ecological imperative. This idea had already been verified for lions and tigers, whose attacks are caused by a small number of specimens, but no one had applied it to the undersea world. 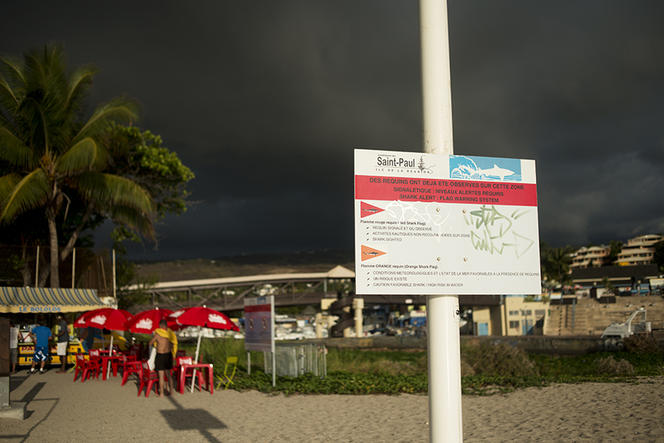 The “Roches noires” beach in Saint Gilles les bains on Reunion island is deserted following a shark attack in 2013. 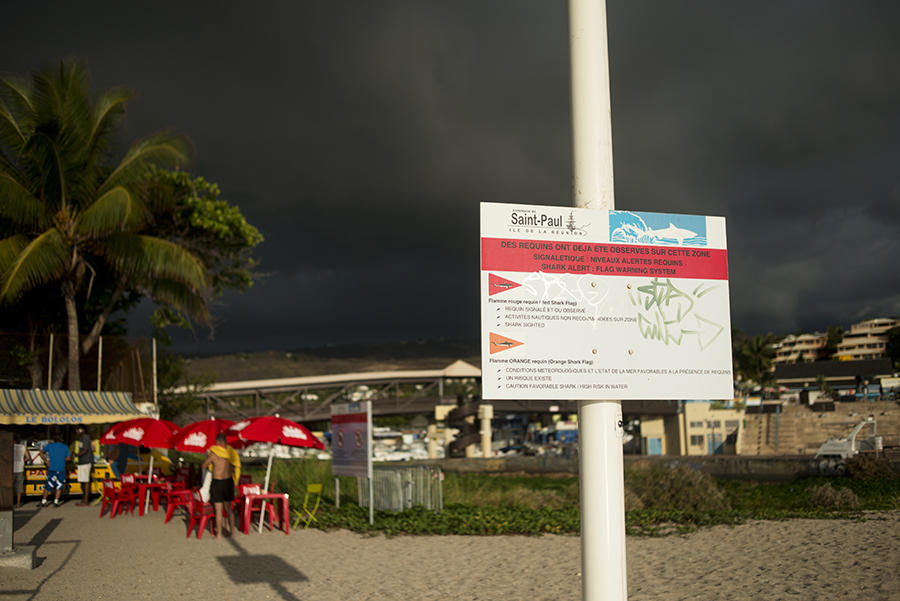 This breakthrough is by no means insignificant, because instead of seeing sharks as a problem, we now realise that the danger probably comes from a handful of individuals belonging to only four species. In the case of the much-publicised attacks in Réunion island French overseas départment in the Indian Ocean recently, I even think that they were due at first to a single bull shark with dysfunctional behaviour. It is worth pointing out that a fish that bites needs to have the courage to strike a human being. This difficult option depends on whether the shark is timid or bold, whether is it is inclined to avoidance or risk-taking, which makes it act differently from its congeners.

If bull sharks in general are not dangerous, how can the problematic specimens be targeted?
Blind ‘regulation’ fishing has been carried out in Réunion island and New Caledonia, based on the idea that the attacks were linked to an overpopulation of sharks. Five fatal incidents were reported between 2010 and 2014. Then the fishing campaigns started, and there were still six fatalities between 2015 and 2021. These figures show that this approach is futile, and relies on a totally false premise. My hypothesis is that the attacks are caused by a very small number of fish, which leave the zone temporarily after biting a human, expecting their prey to be more on guarConsequently, the culprits are probably never among those killed by these punitive operations.

I created the Shark Profiler concept to show that genetic profiling of sharks is possible. We have successfully collected transfer DNA from two shark bites in the Caribbean, which allowed us to determine which species was to blame – the tiger shark – and that the bites came from two different individuals. We want to expand this genetic profiling and supplement it with photographic identification. That way, it will be much easier, in the case of an attack, to target only the animal concerned, using a sort of ‘Wanted’ notice rather like in an old Western. I think it would make an excellent compromise between doing nothing, to protect the animals, and completely eliminating all sharks from the zone, as some would prefer. 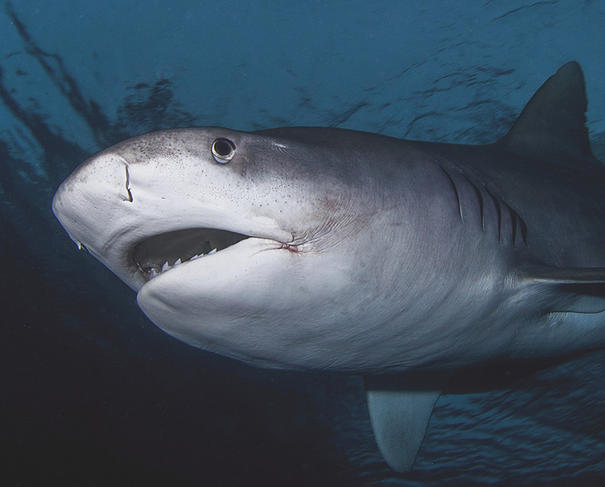 As with other potentially dangerous large sharks, the personality of the tiger shark (Galeocerdo cuvier) could significantly influence its individual behaviour. 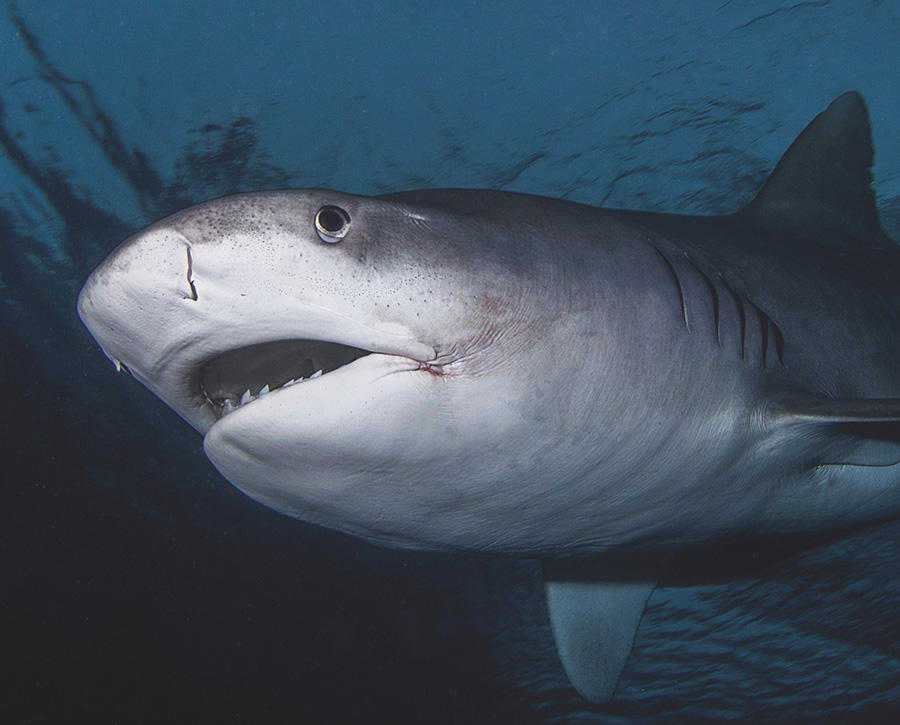 In an article that we recently submitted for publication, we clearly show that regarding two of the four species responsible for fatalities, namely the tiger shark and the oceanic whitetip shark, the bites come from a small number of fish that attack humans multiple times. We also have similar ‘circumstantial evidence’ concerning the bull shark, albeit not with the same degree of proof yet.

What are the actual effects of punitive shark fishing?
Preserving the shark population is my goal, and part of that effort involves risk management. It’s the best way to put an end to the fishing of these endangered species just to control their numbers. They are already victims of unacceptable overfishing, even though they play a key role in the marine ecosystems. As apex predators, at the top of the food chain, sharks are the only animals that can control the populations of mesopredators just beneath them. Their disappearance would result in a proliferation of species that would disrupt the food cycle by feeding on more of the smaller fish. It’s what we call the ‘cascade effect’.

You work for the Polynesian branch of the CRIOBE. What is the current state of shark conservation in that region?
The FinPrint project, based on baited video, has shown that Polynesia has the world's greatest density and diversity of sharks, ahead of the Bahamas and the Palau archipelago, in the South Pacific. This is probably due to the creation of a marine sanctuary in 2006, the first of its kind in the Indo-Pacific zone. A socio-anthropological survey has shown, however, that many Polynesians are not even aware of the sanctuary’s existence, which has therefore had no impact on their fishing activities. Another very important factor is the low anthropic pressure in a zone with relatively few inhabitants despite the fact that it spans five million square kilometres. And the high standard of living in Polynesia means that the people there rely less on sharks for food than in Papua New Guinea or the Salomon Islands.

You mention a wide variety of phenomena in connection with shark conservation. How do you integrate these parameters into your work?
I approach the issue of sharks not only from an ecological, but also from an economic and anthropological perspective. People’s perception of these fish can greatly influence their conservation. In Polynesia, and Oceania in general, they have a good cultural reputation, which has a positive effect. They are often used as a tâura – a family totem or protective animal. Even though the practice is mostly found among older generations, the aura of respect surrounding the shark endures. I also think that, while political decision-makers are quite willing to listen to ecological arguments, they pay much more attention when it comes to money and the economic value of sharks. I do a lot of work on the concept of ecosystem services, in other words the ways in which nature and animals contribute to human societies. 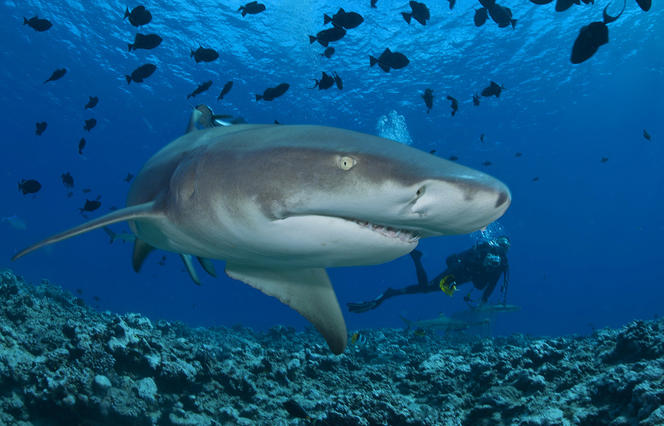 A diver photographying a “Negaprion acutidens” lemon shark surrounded by black triggerfish in Moorea, French Polynesia. The work of researchers consists in elucidating the global characteritics of some species populations, as well as the relationships between these different populations. 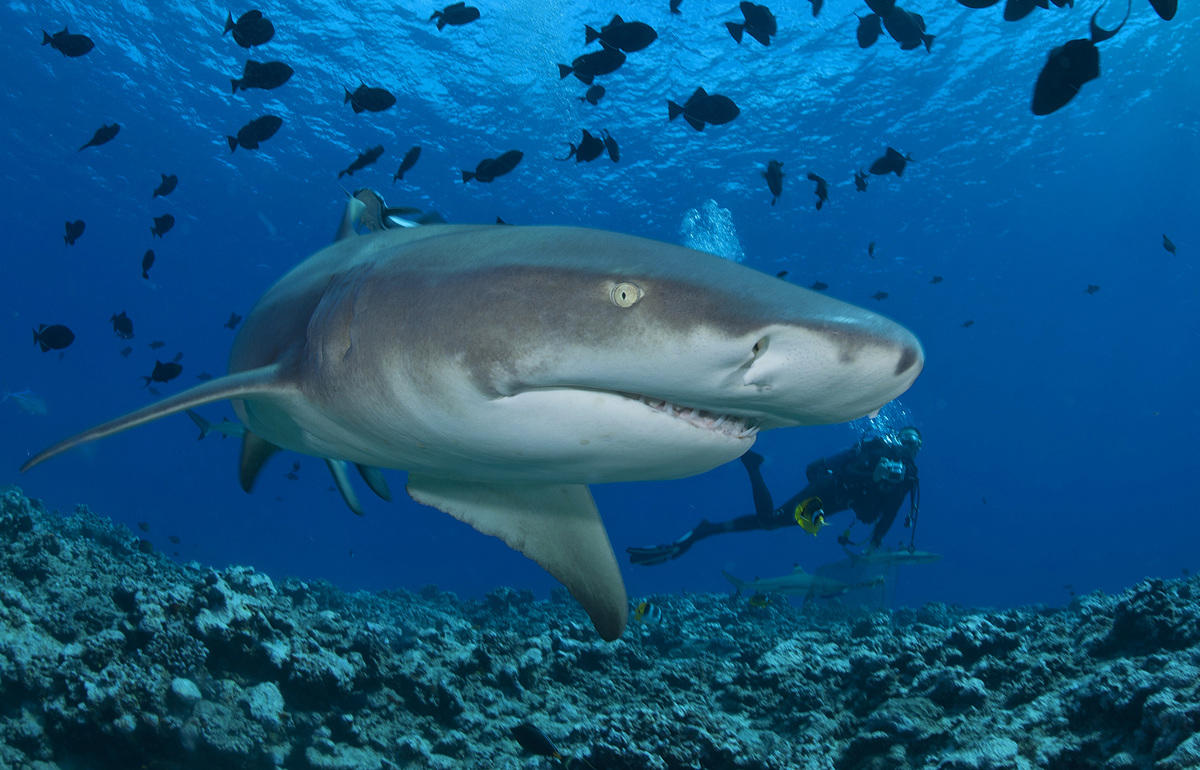 I participated in a study on the lemon shark’s influence on the island of Moorea, which showed that ecotourism generates a financial flow of €2.5 million per year. Over its lifetime, one lemon shark can bring in more than €400,000 to the island, enough to convince fishermen that these animals are worth more alive than dead.

What are the other approaches adopted by the CRIOBE?
The CRIOBE is one of the world’s best laboratories for shark studies. Some of my Australian counterparts are collaborating with my colleague Serge Planes to examine the impact of climate change on these fish, with a focus on the youngest individuals in species like lemon sharks or blacktip reef sharks. We have special enclosures to observe how these juveniles react to temperature and pH variations in the water, like those that will be caused by climate change. Other French researchers, like Johann Mourier, are exploring the social organisation of sharks, showing that, even for the solitary species, these animals have greater social capacities than most fish. For my part, I’m also analysing human societal perceptions of sharks, for example in a recent article about why the Kanaks don’t fear them. 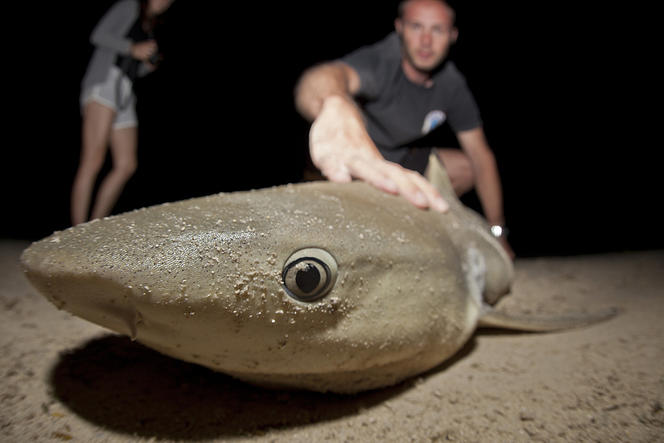 Researchers on a beach in Moorea collect skin samples from this blacktip reef shark before they release it. 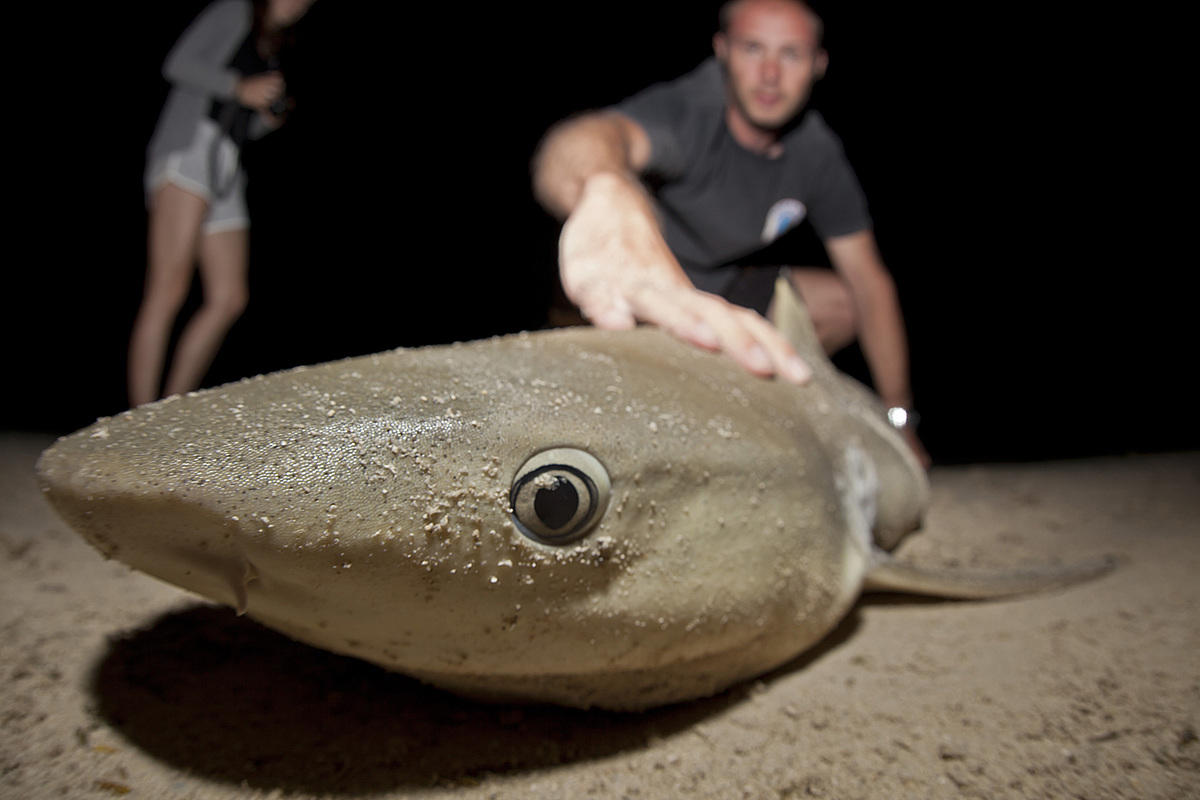 To address the issue of sharks in the Pacific, we advocate novel, compassionate, and reasoned approaches, in order in particular to avoid population-control fishing. When he tours Polynesia this month, French President Emmanuel Macron will visit the CRIOBE. We will take this opportunity to tell him our side of the story.

Article
A Bloom for Ocean Robots