Poppy, a humanoid robot developed by the INRIA Flowers laboratory, takes cues from nature to learn, for example, how to move. It is 84 cm (33”) tall and weighs 3 kg (6.6 lb).
M. Lapeyre/Poppy project
Share
Share
What are robots? What can they do today? Will they be able to decide for themselves tomorrow? Jean-Paul Laumond, co-curator of the new permanent exhibition “Robots” at the Cité des Sciences et de l’Industrie in Paris, answers our questions about these “human-like” machines.

With the anthropologist Denis Vidal,1 you are one of the scientific curators of the permanent exhibition “Robots” at the Cité des Sciences. What is the actual meaning of the term “robot”?
Jean-Paul Laumond:2 Aristotle described a “machine” as a technical object that produces movement, and that definition has not evolved much over time: a robot is a machine that can move automatically within its environment. It is different from an automaton, which only performs mechanical movements, and from a computer, which processes information and does not move. The machine carries out a programme and can make choices, but it does not have free will – it does not “make decisions” at least not as we understand it. An autonomous robot is an automatic machine that operates in a closed space to fulfil a specific need, with clearly determined limits on its tasks and actions. In a way, it’s an effective combination of the automaton and the computer.

Speaking of which, what distinguishes such a machine from Artificial Intelligence (AI) and everything associated with that term?
J.-P. L: After I spoke at a conference on robotics, a participant asked me what would happen when robots were equipped with artificial intelligence, although AI was precisely the subject of my talk – except that I hadn’t actually used the term. He hadn’t seen any form of machine intelligence in what I had said. Language conveys our representations and if we’re not careful, we can easily switch from “autonomous” to “intelligent” – or even “thinking”, “conscious” or even “emotional” machines… Today, AI involves the digital processing of massive amounts of data. The spectacular effectiveness of its algorithms makes it possible to find information quickly on Google, help a physician make a diagnosis, recognise a particular face among thousands of photos stored on a smartphone, convert a voice message into text, etc. This is about the processing of pure information. What fundamentally distinguishes this type of AI from robotics is gravity: the machine has a physical connection with the real world and is subject to gravity. If an algorithm makes an error about your musical tastes, or confuses your mother’s face with your aunt’s, it’s not too much of a problem – you can easily correct it. But if you want to move a robot forward and the algorithm fails, the machine will topple over. The reliability of the algorithms and mathematical models developed in robotics is therefore of crucial importance, and they must take the laws of physics into account.

From automated vacuum cleaners to Mars rovers to deep-sea exploration, robots are everywhere. But what are their capabilities and their limits?
J.-P. L: Today, certain machines can indeed be used to go where humans cannot – the infinitely distant, the infinitely small, certain dangerous places… They can also help drivers parallel park. But by definition, robots are limited in the number of tasks they can be ordered to do or that they can learn. A robot vacuum cleaner may well be autonomous, but it cannot go down a staircase. Another example is the Fukushima disaster in Japan in 2011. People around the world wondered why no robot could be effectively deployed inside the nuclear power plant. What they should know is that such intervention robots, albeit much touted in the media, are still far from being operational. In robotics there is a long time lapse between the development of research projects and their application.

A few months after the disaster, the US agency that funds advanced research projects in the field of defence3 launched a “Robotics Challenge” with the goal of developing “ground robots capable of executing complex tasks in dangerous, degraded, human-engineered environments”. The list of specifications included eight tasks4 that the robot had to perform, such as moving over rubble and climbing a ladder. Twenty-five research teams tried to meet the challenge over a three-year period, and the final round was held in California in 2015. All of the teams had designed anthropomorphic machines. Only a few succeeded in completing a sequence of two or three of the eight specified tasks – which does not mean that this goal will never be achieved.

What are the main challenges in robotics research?
J.-P. L: Multitasking robots, as we have seen, but that’s not all. Simple tasks, like picking up various objects without breaking them, require perfect control of movements. Such precision can only be achieved by certain prototype robots in the laboratory. This is because a movement is a continuous function of time in space. How can a computer, which does nothing more than perform calculations, solve this problem of continuity, with the many constraints imposed by physics? That’s the key challenge. To take a concrete example, a machine knits better and more evenly than anyone’s grandmother. But there will never be artificial hands capable of manipulating needles and yarn balls, and doing garter stitches. Furthermore, there would be no market for such a machine, which would still be far from rivalling the expertise acquired by a grandmother who knits. Robotics research focuses on clearly defined tasks involving movement, communication, object manipulation and interaction with humans. 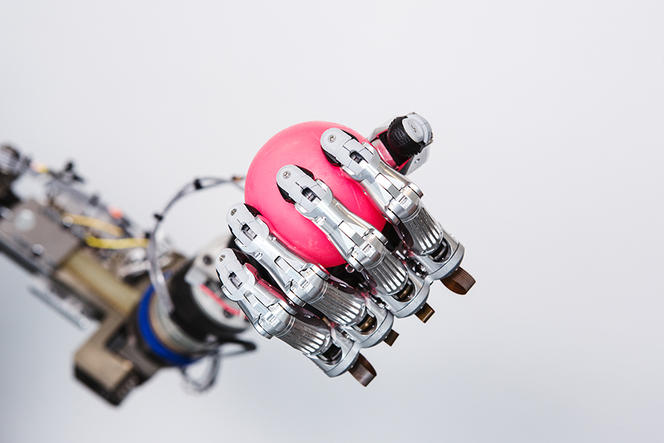 Closeup of the hand of the hydraulically controlled robot Tino holding a ball. It is programmed to learn as a child does, associating vision and movement. 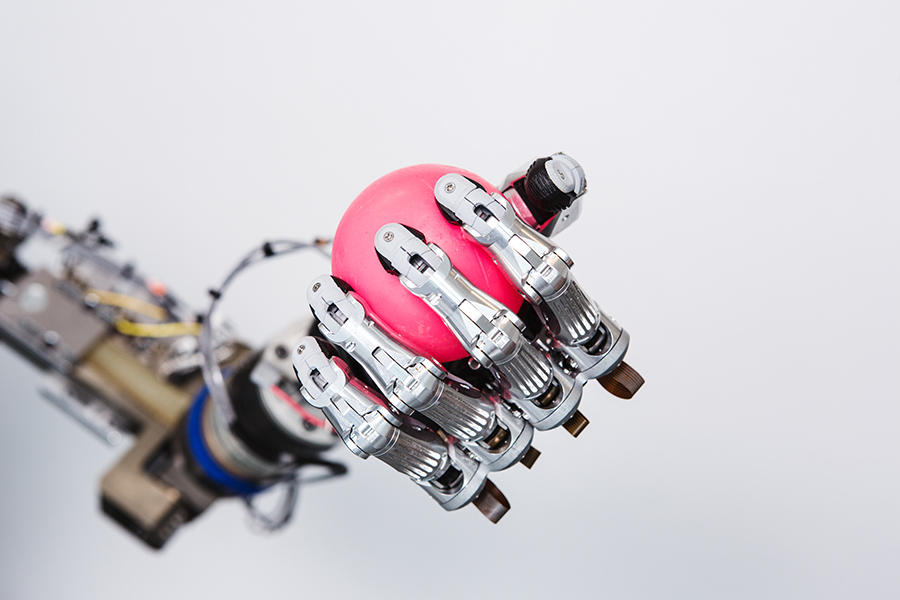 So robots are not going to replace human beings any time soon…
J.-P. L: In fact, it takes nearly 10,000 hours to master a technical gesture. We have no idea how complex our everyday movements actually are! I think that robots are nowhere near replacing the hand of the craftsman, and it will be some time before their inertial sensors even approach the complexity of our vestibular systemFermerLocated in the inner ear, it contributes to the sensation of movement and balance in most mammals.. Machines are valuable for their performance in highly specialised, repetitive, sometimes dangerous functions. I think machines will complement humans rather than replace them.

What do robots represent in economic terms today?
J.-P. L: According to current estimates, there are nearly 1.5 million industrial robots, fewer than 20 million domestic ones like lawn mowers and vacuum cleaners, plus specialised machines like drones and surgical equipment, and some 20,000 humanoid robots, used mainly in the fields of education and marketing. For everyday uses, like the performance of difficult tasks, these figures will rise significantly with the development of service robotics, a market that is expected to represent nearly €100 billion in 2020. Yet this projection should be taken with caution, because it presumes the resolution of problems that are still eluding the scientific community.

Why did you decide to participate in this cooperative exhibition project?
J.-P. L: Denis Vidal and I have tried to combine our two visions: mine exploring the capacities, limits and challenges of robotics, and his investigating the perception of machines in the collective imagination and placing this discipline in the context of technological history. Personally, I think it’s important for researchers to get out of the laboratory and to address the questions raised by society. Lastly, the project allowed us to examine some of the fantasies about robots, like the myth of the cyborg, the half human-half machine creature that represents the future of a human race doomed to a kind of transhumanism. It’s too early to talk about machine consciousness at this stage, because we are still unable to define human consciousness. The exhibition encourages us to reflect on our own fantasies and on new uses. It also prompts us to consider certain ethical issues. How are we going to adapt? How will machines affect our work? How far should we go? Can everything be digitised? What about the value of human contact, the ecological cost of these new technologies, the danger of reducing people and the world to digitisations? We must be very cautious. The presence of these new machines in our everyday lives is a real change in itself. As I often say, we live in a society fascinated by new technologies. And what I mean by ‘fascinated’ is that we are unaware of our ignorance. I would rather see amazement than fascination – in other words, that people are conscious of the fact that they don’t understand. The exhibition offers a few lines of investigation suggesting that there is something to understand. Its ultimate goal is to better equip our contemporaries to confront the social transformations brought about by these new technologies.