ISIR-UPMC
Share
Share
Robots measuring a few dozen micrometres are now capable of grasping, pushing, and even “feeling” cells! These astounding micromachines, designed at the French Institute for Intelligent Systems and Robotics, are already part of biomedical application projects.

On striking images (see videos below), microscopic “construction equipment”, remotely controlled by a human operator, grasps and moves biological cells. These tiny mobile robots are activated using optical techniques with force feedback, allowing the operator to feel the interaction of forces with the “loads” being transported. These amazing robots measuring a dozen micrometres – approximately twice the diameter of a red blood cell – grew out of research conducted by Edison Gerena, a postdoctoral fellow at the Institute for Intelligent Systems and Robotics (ISIR),1 earning him the 2020 dissertation prize from the CNRS's GDR robotics research group.

The cornerstone of the technique is the principle of optical tweezers,2 which can trap a microscopic object with a laser beam. If laser light is properly focused on its target, its refraction and diffraction transmit a force superior to the viscous forces keeping the object in place, thereby moving it by pointing the laser in different directions, with a surprising level of precision.
“Optical tweezers are not new, they were developed in the US in 1987, but we automated them with a view to their industrialisation. In particular, we added force feedback,” points out Sinan Haliyo, a researcher at the ISIR and associate professor at Sorbonne Université, who supervised Gerena’s research. “We thus have a better understanding of how forces spread, and we can also capture interactions with the environment, which offers greater control of grasped ‘objects’, as well as unparalleled interactivity.”

A joystick equipped with a force feedback system

The system is equipped with an event camera that only displays dynamic information, essentially movement. This enables more accurate measurement of the interaction forces between the target and its environment. What's more, the famous force feedback that takes into account the object's reaction to these forces makes it possible to adapt the joystick with extreme precision, until it achieves a resolution on the order of the piconewton – or one ten-billionth of the weight exerted by an object of no more than one gram.

On such scales, observations made with an optical microscope only provide two-dimensional images, with very little depth of field. Yet cells and microrobots in a liquid suspension navigate in a three-dimensional space. In order for them to meet, the operator needs to know on what plane each one is located. 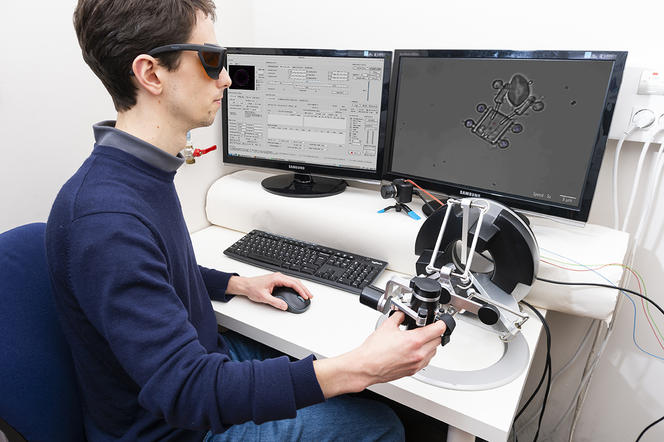 A force feedback joystick can be used to precisely guide microrobots in all directions within biological samples (cancerous cells, bacteria, parasites, etc.). 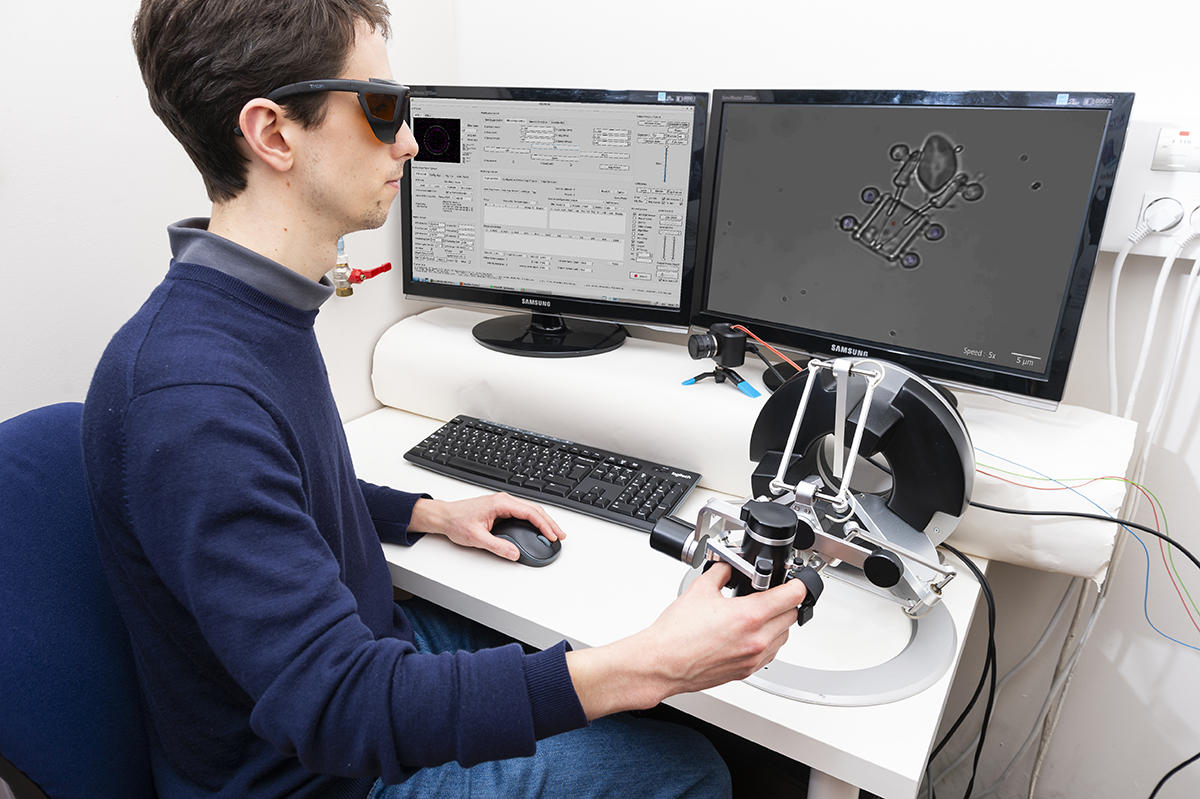 This information is obtained using the force feedback joystick, which by exerting a force on the operator's hand when the controlled object meets resistance, indicates whether contact has been established with the target: in addition to the mechanical characteristics of the cells, which can practically be “touched” remotely, the operator can actually feel that contact.

In addition, objects measuring just a few micrometres that are manipulated by the system can be assembled to form more complex tools or machines, whose dimension reaches a hundred micrometres. Directing a single laser beam – with varying speeds and focal positions – at several objects simultaneously even offers precise three-dimensional control of each part of the whole. This control, which is totally transparent for the operator, enables intuitive command of the microrobot's movement via the haptic interface.

Produced with a 3D printer

These microrobots have movement with six degrees of freedom, similar to drones in the air. They were created using a 3D printer from the company Nanoscribe, with a resolution of one hundred nanometres. The material used is a specific biocompatible polymer. Designed and developed at the ISIR, the microrobots were then produced by a team from the Femto-ST Institute3 in Besançon (eastern France), which specialises in 3D printing on such small scales. 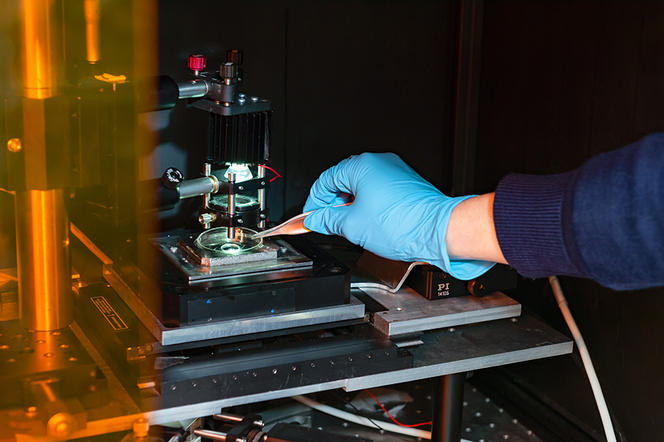 Inserting a sample at an optical tweezer station, a technique that can trap and move a microscopic object using a laser beam. The microrobots developed at the ISIR rely on this method. 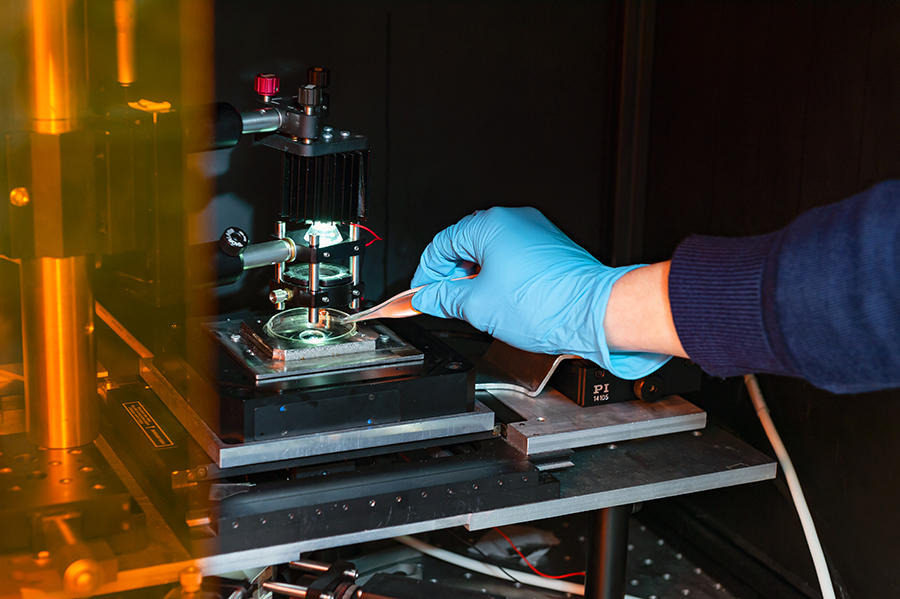 3D printing can generate large quantities of different tools, and adapt them based on needs. For instance, the researchers came up with microrobots that can grasp a cell and turn it over, in order to observe it from every angle. They also built a machine equipped with a probe that measures in real time the interaction of forces and resistance of objects it touches, all this inside a Petri dish. The device – a scientific instrument suitable for biomedicine – was conceived as part of the ANR IOTA project.

“We are exploring applications for these technologies in experimental biology,” explains Haliyo, citing the ANR OptoBots project. “We are working in particular on colon cancer,4 with the goal of using T lymphocytes. These particular white blood cells attack cancerous ones through the phenomenon known as adhesion. However, some diseased cells are incorrectly detected, and we need tools to understand why.” The researchers are hoping that this will eventually enable them to “programme” lymphocytes to target those cells that continue to escape detection.

Another potential avenue is to use the microrobots in connection with medically-assisted procreation techniques, such as in vitro fertilisation (IVF). “Given the enormous demand and a success rate below 20%, we had the idea of automating the selection of gametes, along with other stages of the procedure. Today this is still done by hand using pipettes, which essentially amounts to manipulating a Lego brick with a crane.” Researchers are planning to collaborate with the Reproductive Biology Department at Hôpital Tenon (Cecos)5 in Paris.

In addition to its precision, the micromanipulation technique can control robots within sealed systems, such as labs-on-a-chip. Especially suited to the situations encountered in biomedical research, in which samples are highly sensitive to the environment, microrobots will no doubt be busy on all fronts!

See author's bio
Realities in the field are weaving the “New Silk Road”Previous
Steganography: when content hides other contentNext

Video
Walking with our ancestors
Robotics