This robotic hand developed at the P’ Institute is one of the most agile in the world.
C. Frésillon / Pprime / CNRS Photothèque
Share
Share
Highly flexible, environmentally friendly, with the agility of a human hand or the ability to interact in groups... Portraits of five incredibly talented robots that could soon make a debut in the fields of health, industry, and underwater exploration.

1. The hand with agile fingers

With its three fingers and thumb each with four joints, the robotic hand developed by the CNRS Pprime Institute (P') can grasp complex objects such as wood briquettes, tennis balls, and even plastic caps, which it can unscrew with ease. "It's the only robot in France that can handle an item once it has grabbed it, using no more than the coordinated movements of its fingers, and doing so with a precise and smooth trajectory," points out Jean-Pierre Gazeau, a research engineer who is developing the device with his colleagues at P'. "There are only a handful of these in the world, especially in Germany, that are capable of such precision." 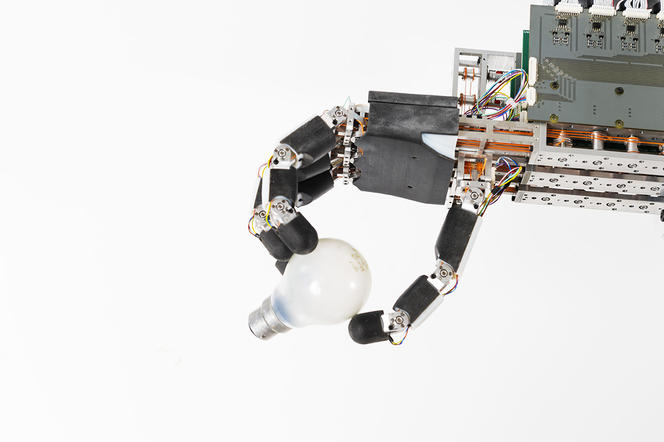 A slightly larger variant of this right hand is being adapted for an underwater archeology project. 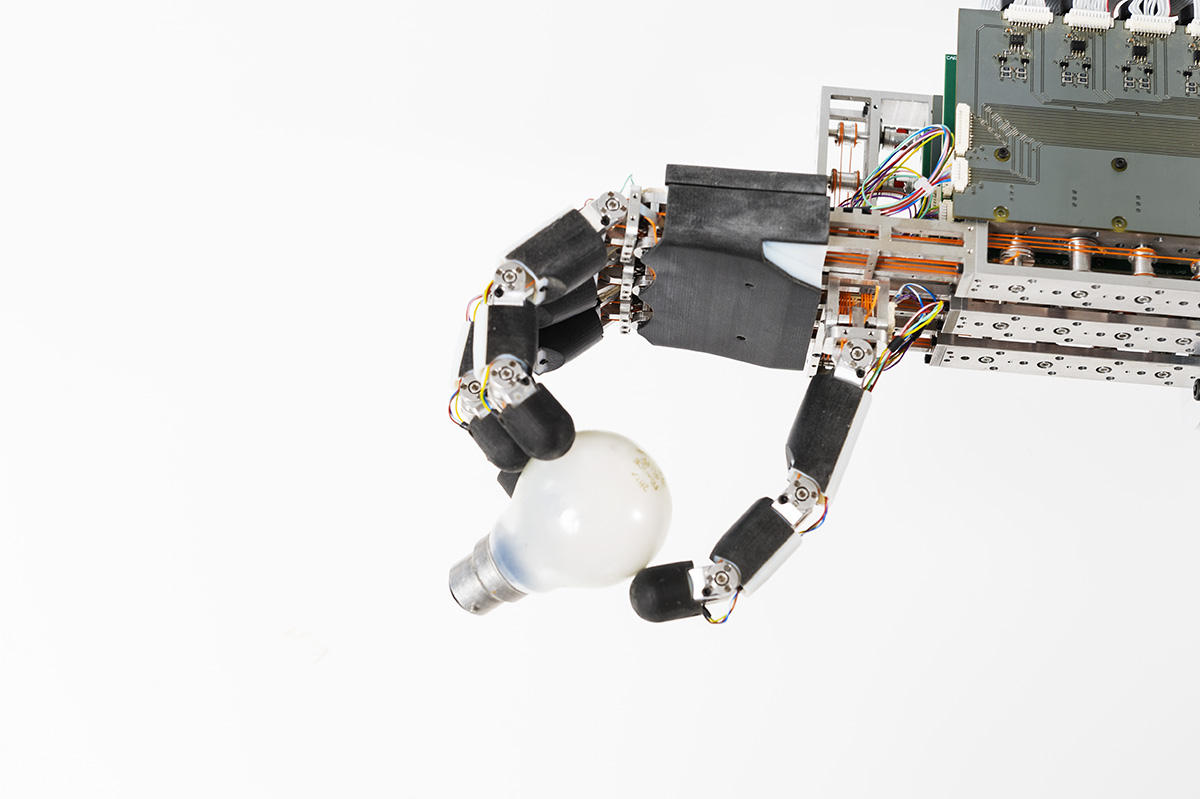 While industrial robots are generally highly specialised, this human-sized right hand, which was patented by the CNRS, can both assess the grip strength needed for a particular object and adapt to a wide variety of tasks. The goal is to offer a good helping hand in the factories of the future, where humans and robots will have to work together. It is these situations of interaction that are being explored by the Mach1 joint laboratory, which enjoys support from the French National Research Agency, in its effort to make human-robot collaboration more effective, thanks in particular to a partnership with Iteca, a company specialising in virtual environments.

There is no need though to wait for the future to secure this helping hand, as a slightly larger version without the manipulation capabilities is already being adapted for underwater archaeology. For this project,2 it will be attached to a small submarine and remotely operated to grasp extremely fragile remains with great precision in environments that are difficult to access, just as archaeological divers would do with one or two hands.

2. BathyBot, the rover of the deep

It would not be out of place on Mars, but BathyBot prefers the seabed. A rover that looks a little like Wall-E (the trash-compacting robot from the film of the same name), it will descend to a depth of 2,500 metres off the coast of Toulon (southeastern France) in the coming months. Its caterpillar tracks will propel it on the ocean floor, while a giant cable will keep it connected and permanently supplied from land.

"BathyBot complements a deep-sea observatory3 that also includes the Albatross instrumented mooring line deployed on the water column hanging over it. The goal is to study the impact of climate change, biodiversity, bioluminescence, and flow of particles for a minimal duration of ten years," explain Séverine Martini, a postdoctoral fellow at the Mediterranean Institute of Oceanography,4 and Christian Tamburini, a CNRS research professor at the same institute. 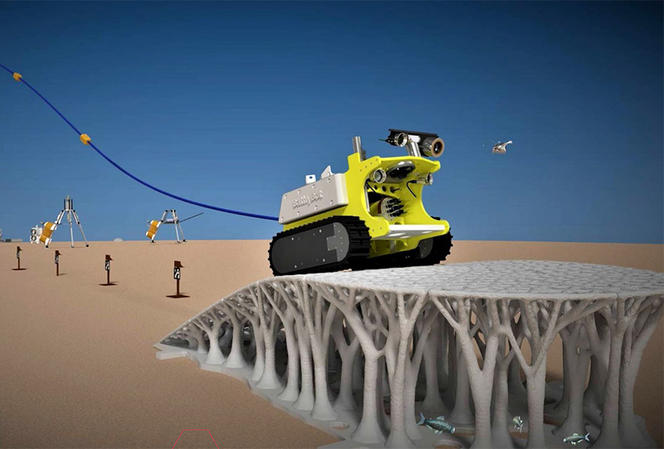 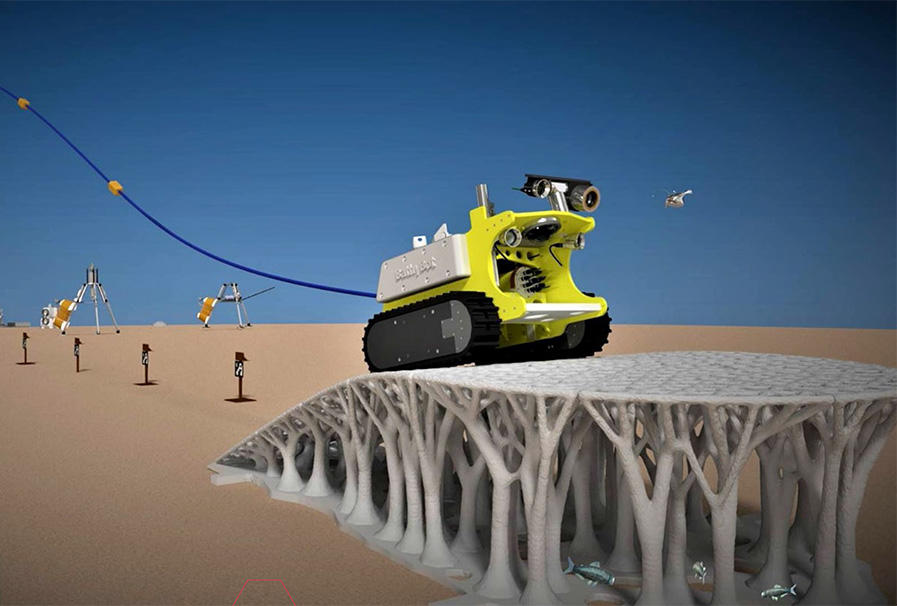 BathyBot, Europe's first deep-sea rover remotely operated via Internet, is guided by a camera equipped with white light. A second camera will explore bioluminescence with high sensitivity, using only red light so as not to frighten organisms in the depths. The robot will "play" with plankton using small coloured LEDs, in an effort to determine which ones attract or, on the contrary, scare away the fauna of the Mediterranean Sea floor.

BathyBot is also equipped with sensors for temperature, salinity, and water oxygenation, as well as an imaging system to detect particles and plankton, which will help provide a very precise picture of a virtually unknown environment. Finally, BathyReef4, a bio-inspired openwork ramp made of cement, will elevate the rover to increase its field of observation, and will also concentrate the organisms being studied by serving as a structure for them to colonise over several years.

RobEcolo, the world's first wooden industrial robot,5 saw the light of day in northwestern France, the fruit of a collaboration between the Laboratory of Digital Sciences of Nantes (LS2N)6 and the ESB (École Supérieure du Bois), also in Nantes. "The global stock of robots is increasing rapidly, but no one is thinking about their environmental impact beyond questions of energy savings," notes project leader Sébastien Briot, a researcher at the LS2N. "Yet wood, extracted from well-managed forests, offers an excellent environmental footprint, especially compared to the materials that replaced it in everyday life, such as aluminium," he adds.

RobEcolo's anatomy consists of four articulated segments making up a diamond shape that can manipulate and position objects on a flat surface. The electronics, motorisation, and joints are made of metal and plastic, but the rest is beech treated with acetic acid to better resist the size variations caused by humidity. The robot weighs approximately seven kilograms, or one to two kilograms more than a steel counterpart. "Of course a robot's mass affects its energy consumption, but if necessary there are many techniques for reducing it that could be applied in the future," Briot points out. Another problem is that wood, a living material, has mechanical properties that vary greatly from one tree to another, and even within the same species.

Computer-generated image of RobEcolo, the industrial robot made of wood (left). The same robot, disassembled (right).

To compensate for these potential variations in the parts that compose it, RobEcolo is equipped with a camera that allows it to manipulate objects with a precision of 80 microns (or less than one tenth of a millimetre). And we haven’t seen the last of this "green" robot which, in addition to further improving its performance, will soon increase its share of sustainable components as well – enough to convince industrial players!

4. Soft robots to round the edges

A far cry from the usual rigidity of machines, robot specimens known as soft robots are causing quite a stir. Shaped like octopuses or caterpillars, and equipped with flexible joints or made from easily deformable materials, they try to mimic the elasticity of living tissue. What makes them interesting is that they can absorb disturbances or impacts without breaking or suddenly releasing energy, an important quality to avoid injury to the humans they interact with. Another advantage is that this improved distribution of mechanical stress prevents wear and tear from being concentrated on the joints.

"There is no need either to systematically avoid obstacles, as a deformable robot can bounce back from contact with its environment and use it to complete its task," observes Christian Duriez, an Inria research professor at the Research Centre in Computer Science, Signal, and Automatics of Lille (CRIStAL),7 who developed numerous prototypes, some of which are coated with silicone. "They can manipulate the most fragile materials, and offer numerous medical applications, as they present no risk of injury to patients."
The scientist is also involved in creating a robot that facilitates the insertion of a cochlear implant in the inner ear. And his projects include the creation of automatons to scan tissue during surgery in order to help surgeons identify cancerous sections. The design of soft robots is nevertheless tricky! The lack of a fixed number of clearly-defined joints gives them an almost infinite freedom of movement, which requires particularly complex calculations. It is therefore necessary to devise ad hoc modelling and control, thereby pushing back the limits of traditional robotics.

Alice, who is the size of a die, knows how to find the shortest path through a labyrinth. However, this pocket-sized robot does not wander about alone, but instead uses the light trails left8 by other identical devices, sometimes numbering up to twenty! The principle is the same for ants, for when one of them finds a food source, it lays down pheromones on its way back to the nest. The path that is marked out attracts other ants, who will in turn leave molecules as they return. In the end, the shortest track is the one with the greatest amount of pheromones, for it is necessarily taken by a larger number of insects over the same period of time than an alternative, longer route.9 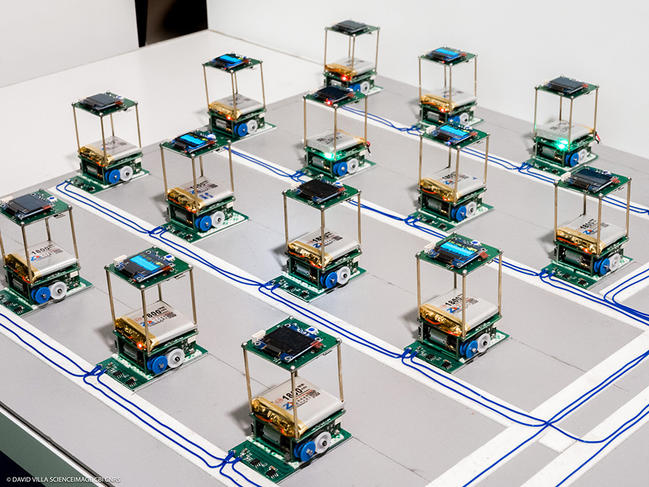 Cuboïds microrobots developed to study the coordination of individuals in a school of fish. 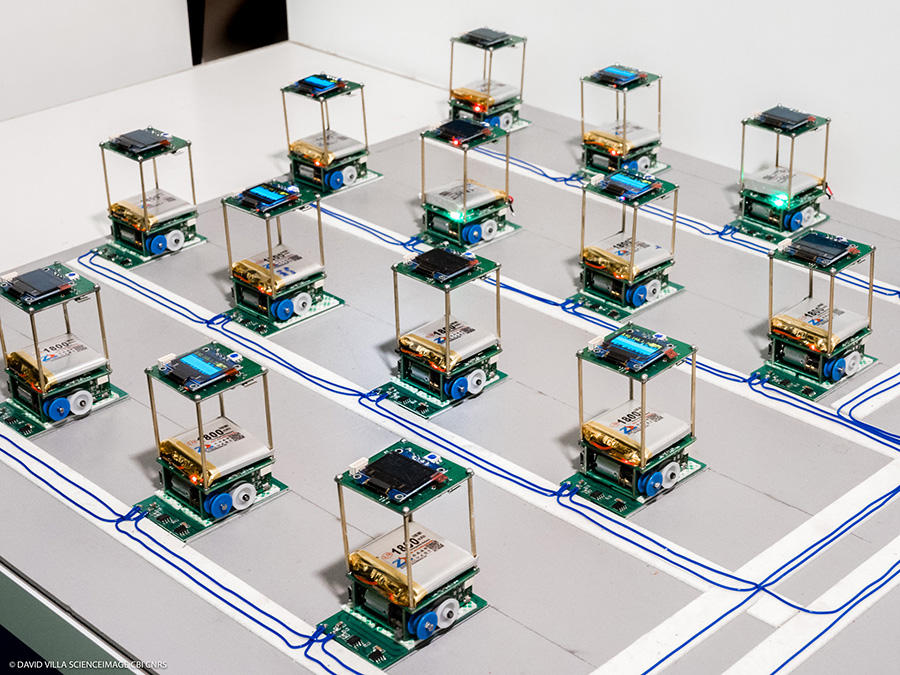 "When creating autonomous robots, the traditional artificial intelligence paradigm consists in building a single machine that is highly robust and complex," says Guy Theraulaz, research professor at the CRCA (research centre on animal cognition laboratory).10 "However, the model of social insects shows that swarms of much simpler robots can also accomplish numerous tasks if they interact correctly," emphasizes the ethologist, who has long taken inspiration from animal groups to design algorithms.

The scientist is also working on a new generation of microrobots, the Cuboïds, in order to study the coordination of individuals in schools of fish. "These studies have shown that complex collective movements could be governed by simple interactions between each robot and just one or two of its neighbours." This will help swarms to be more autonomous, especially those consisting of drones, which are currently flown individually.

See author's bio
Detecting Covid-19 on the breathPrevious
COVID-19: Sniffer dogs to the rescue? Next