Benoît Costil during an L1 match between Rennes and Nice in 2016. The goalkeeper took part in peripheral attention experiments conducted by cognitive science researcher Camille Jeunet.
V. HACHE / AFP
Share
Share
Knowing how to look sideways can be crucial for professional football players, and goalkeepers in particular! A researcher in cognitive science recently conducted a study involving a number of them, with promising results for the improvement of peripheral vision.

Goalkeepers have fairly specific challenges on the field. They have to simultaneously keep an eye on the ball, the defensive area, and their opponents, all while maintaining good reflexes in order to block any shots. They rely on peripheral vision to process all of this information and anticipate each action, namely their ability to keep their attention fixed on a location other than their point of focus, which is generally the ball.

What is the best way to make the perfect stop? Through greater endurance? Or better technique? Not exclusively. According to Camille Jeunet, a researcher at the CLLE  laboratory,1" sports performance is often associated with physiological and biomechanical aspects, whereas it also depends on psychological factors including stress and cognitive factors such as attention, which remain widely underestimated." The answer could therefore reside in... the brains of athletes.

For a number of weeks researchers2 joined forces with the goalkeeping staff at the Stade Rennais football club (SRFC) for unusual training sessions. "Our purpose was to understand how the brain activity of athletes functions in specific situations of peripheral attention," Jeunet explains. To do so researchers used an innovative procedure called neurofeedback. 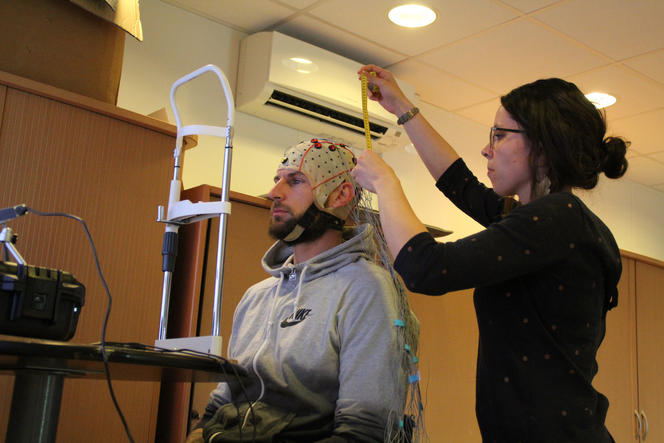 Jeunet measuring the distance between the nose and the bump at the back of the skull in order to install the EEG (electroencephalogram) helmet on the football player's head, with the central electrode correctly positioned. 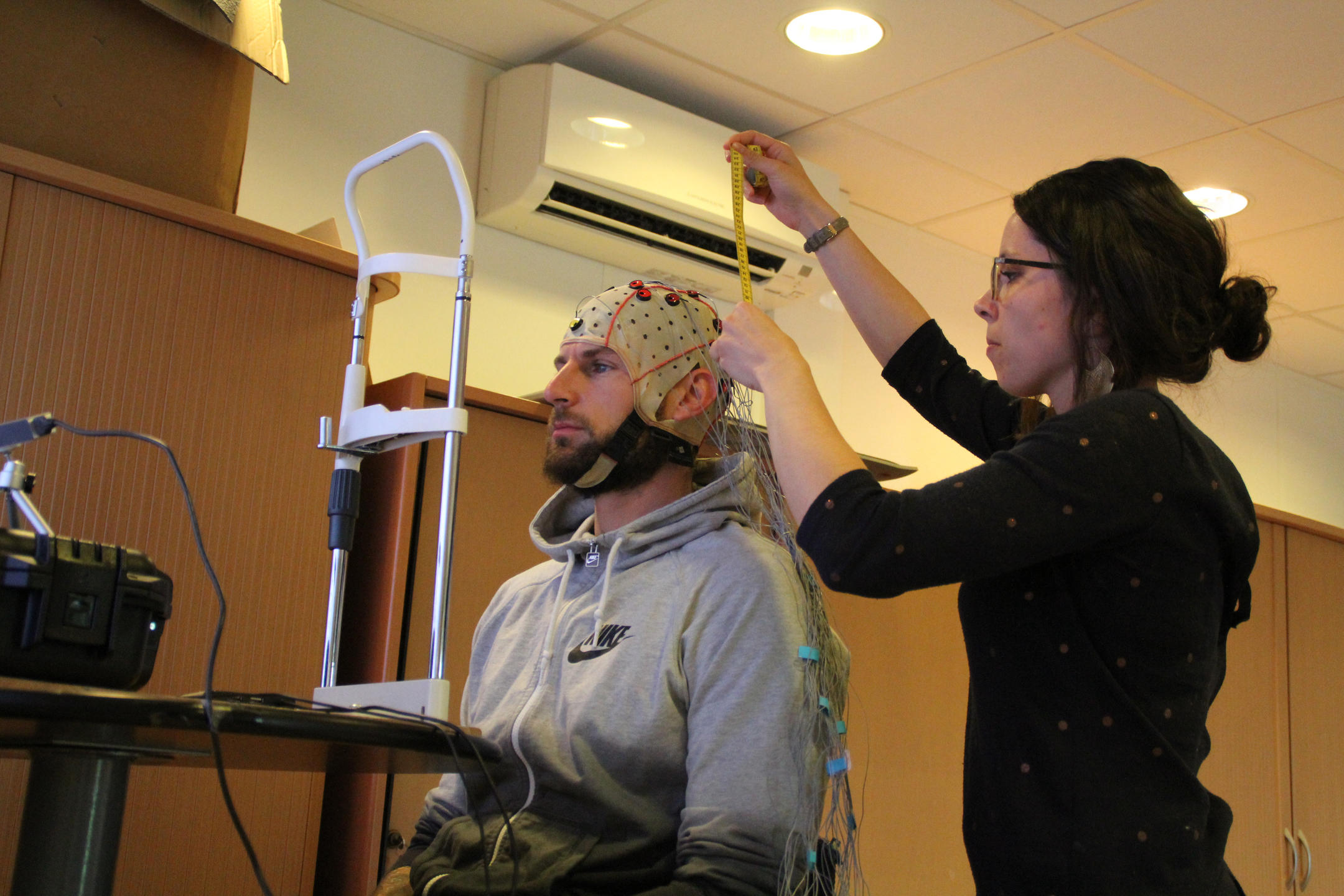 At the interface of neuroscience and computer science, neurofeedback training is a learning technique based on "information feedback" from brain activity, which is made possible by "plugging into" the brain to see what is happening in real time. The brain's electrical activity is recorded in the form of electroencephalogram (EEG) traces, thereby enabling live testing of the effectiveness of various mental strategies for modulating activity and enhancing attention.

A specific marker for peripheral vision

Researchers proceeded step by step to design neurofeedback training specifically dedicated to improving the peripheral attention of goalkeepers. They first identified the specific EEG rhythms that underlie these cognitive capacities. "We knew that the intensity of the alpha rhythm is connected to perception and visual attention, but we did not know whether there was a specific EEG marker for peripheral attention that could be used for neurofeedback training," Jeunet points out.

The scientist identified one such marker, the lateralisation index, which was already known in the literature. In order to "optimise" the processing of information, our brain is indeed lateralised, with the right side overseeing information from our left field of vision, and vice versa. "The lateralisation index is obtained through the subtraction of right and left occipital alpha activity, which can be measured during a task involving peripheral attention."

In short, if the index is positive, the right side is more active, and the opposite if it is negative. "When we direct our attention to the right while remaining focused on a central point, activity increases on the right side. This reflects a strategy used by our brain to inhibit information coming from the left hemisphere, and to allocate more resources to that coming from the right," adds Jeunet. 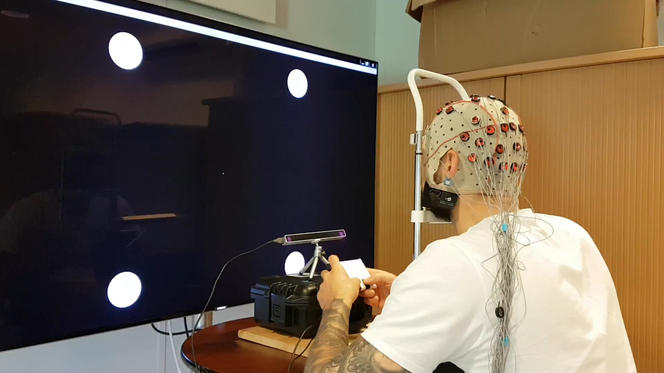 In this experiment a symbol appears in one of the four targets located at the edges of the screen. The football player indicates the symbol he saw, while the eye tracker set up on a tripod verifies that his gaze remains fixed on the centre of the screen. 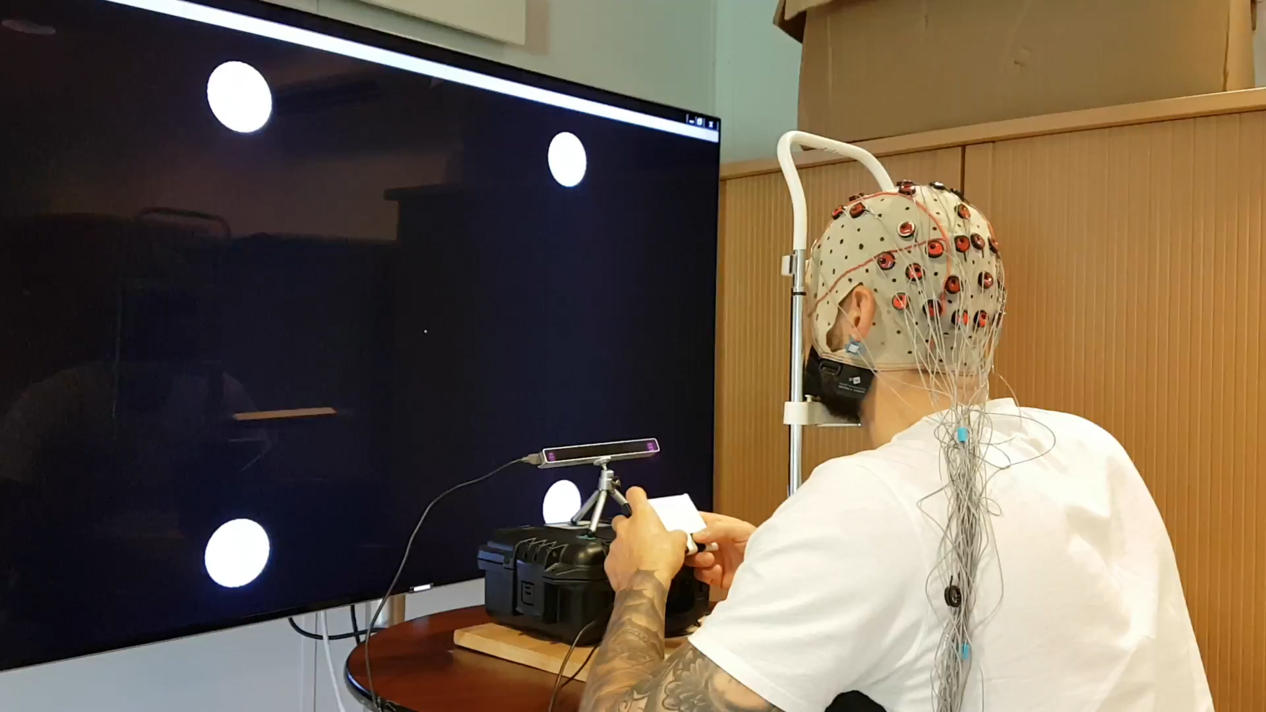 Since this phenomenon makes it possible to pick up even more visual clues, researchers tried to replicate it for the first time with athletes, by following their brain activity before and during the completion of a peripheral attention task.

The screen perception of seventeen goalkeepers from the SRFC and the surrounding region was monitored by an eye tracker and electrodes attached to the head. The players’ gaze had to remain fixed on the centre of the screen throughout the task. A diamond appeared in one of the targets located in the four corners of the screen, and then turned blue. A + or x sign was quickly displayed, and then masked to avoid retinal retention and preserve a visual "trace" of the preceding image.

The athletes then had to indicate the sign they saw. "The timing was very quick, between 200 and 500 milliseconds per event," stresses Jeunet. They repeated this task for a number of minutes, alternating with periods of rest.

The participants also completed MOT (multiple object tracking) tests to assess the improvement in their cognitive performance between the start and end of the session. Once again their gaze had to remain focused on a central point as little balls randomly moved about the screen. By interpreting the goalkeepers' EEG traces in relation to broad averages, and by combining all of these stages –smoothing" the overall results – the scientists observed that as the athletes got better at the task during the session, they also improved at the MOT test. "Put another way, we identified greater activity on the same side of the brain as where their attention was directed during the exercises." 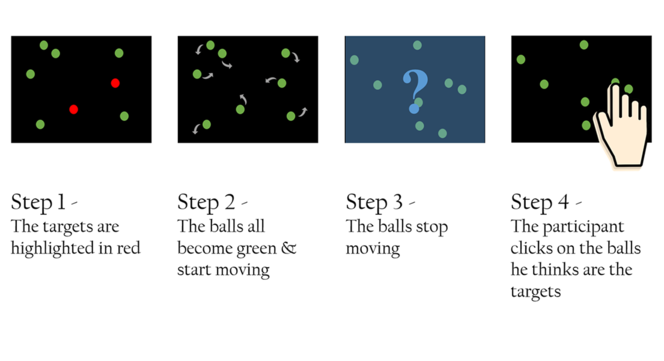 In this other test, participants must follow the moving targets, which are briefly indicated in red, while keeping their gaze fixed on the centre of the screen. Peripheral attention allows them to click on the targets that they believe they have successfully followed since stage 1. 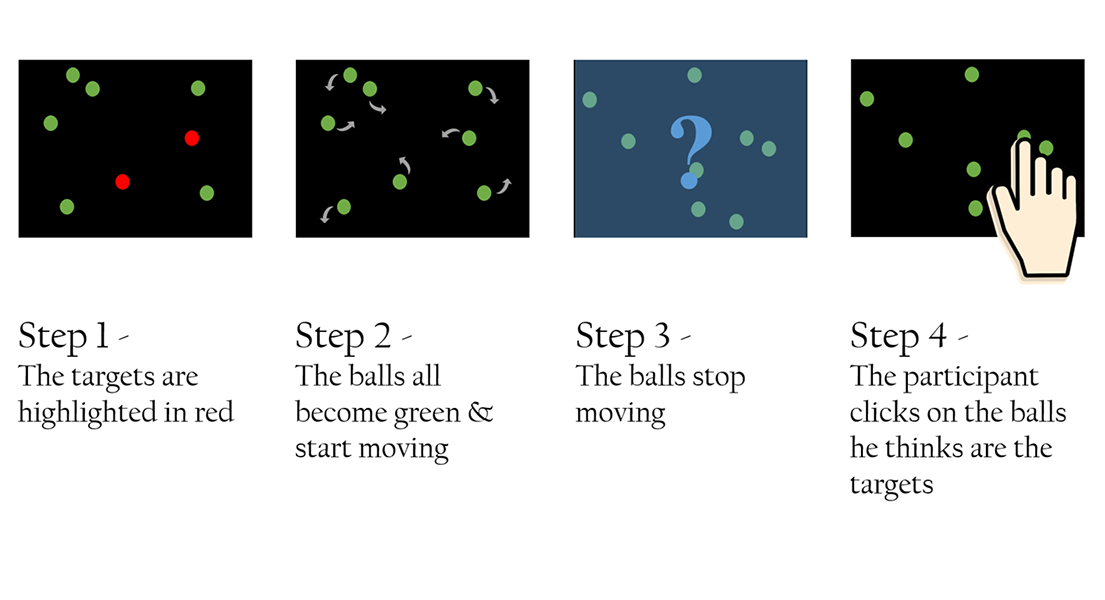 In this other test, participants must follow the moving targets, which are briefly indicated in red, while keeping their gaze fixed on the centre of the screen. Peripheral attention allows them to click on the targets that they believe they have successfully followed since stage 1.
C. Jeunet
C. Jeunet
Share
Share

While promising, these initial results do not comply with all of the conditions for neurofeedback training. "We have to meet three obligations: the identified rhythm must be specific to peripheral attention, it must be measurable in real time to enable continuous feedback, and it must be correlated to the performance or expertise of the players. We were not able to identify the laterality index in our traces during single real-time tests. Although specific to peripheral attention, we realised that it was not consistent with the performance or expertise of the participants." The researchers nevertheless obtained promising results. During the resting time preceding the peripheral attention tasks, the alpha rhythm increased, which suggests a connection between its amplitude and the cognitive performance of athletes.

The scientists believe that the brain's activity, measurable in real time, could reflect a general cognitive state favourable to performance. The next step involves transferring these results in order to design neurofeedback training that is relevant, effective, and motivating for athletes, especially in virtual reality. This is yet another proof that to optimise our movements, we also need to train our brain.

Video
The Effects of Ageing on Visual Perception