Robots Head for the Sky

Robots Head for the Sky

Small aerial manipulation system developed at LAAS-CNRS for the implementation and evaluation of motion planning and control methods. It consists of a quadrotor equipped with a lightweight two-joint arm.
LAAS-CNRS
Share
Share
Flying robots that can handle objects and interact with their environment could soon be used by a number of industries. Research, conducted partly in France as part of a European consortium, has resulted in the creation of prototypes that are currently the most advanced in the world. Interview with Juan Cortés, senior researcher at the LAAS-CNRS.

Is aerial manipulation really so new?
Juan Cortés:1 Yes, aerial robotic systems that can manipulate objects is a research area that started taking off in 2012. In the field of robotics, ground-fixed manipulators are already well known, such as welding robots used in the automobile industry. There are also mobile platforms that operate on the ground: these can move—mostly on wheel—and are equipped with one or several arms. Research on those machines began in the 1970s and 80s and this field has seen a lot of recent development in the context of the factory of the future (dubbed Industry 4.0). There are also underwater manipulating robots. There are a number of parallels between air and water, but an aerial robot must be far more reactive, since the medium is much less dense, and there is no room for error (if an aerial robot has an actuation problem, it won’t just float). Our laboratory is specialized in aerial robotics—flying platforms that are capable of manipulation and interaction with the environment.

An aerial robot must be far more reactive, since the medium is much less dense, and there is no room for error.

Why do we need aerial manipulators?
J.C.: There are many potential applications, such as sample collection from highly inaccessible places or hazardous areas. Within the European project AEROARMS,2 in which we are involved, our partners are active in the field of inspection of industrial installations, more precisely in the oil and gas sector. They have thousands of kilometers of metal pipes that require manual inspection. This is an extremely costly process (estimated at 58 billion euros worldwide for 2008 alone). More importantly though, this process is the greatest source of accidents within these industries. Today, it is carried out by setting up scaffolding, or using human operators suspended by cables, and there are many risks involved. The idea behind our project is to use aerial robots to facilitate such inspection work, with assessment of cracks or corrosion being performed by sensors moved by autonomous robots along the pipes. 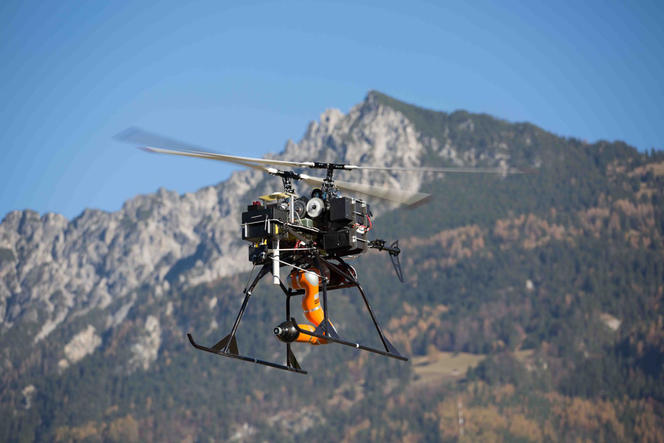 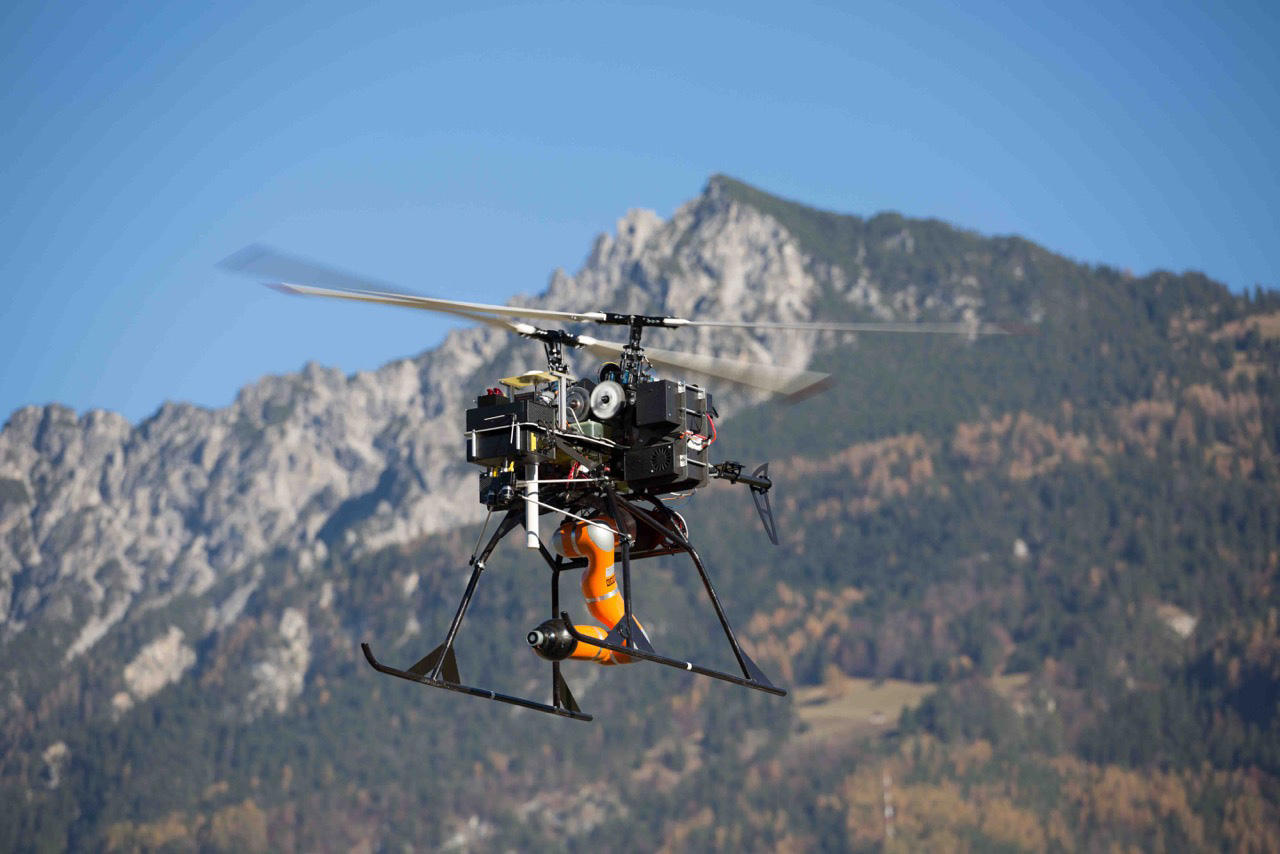 What are the main difficulties encountered in this field?
J.C.: What really drives us on is the scientific challenge that these robots entail. The problems involved in adding a manipulating tool or arm to an aerial vehicle are chiefly theoretical. The whole design has to be rethought in terms of mechatronics (reconfiguring the robot’s geometry, materials, types of actuators, etc.). We also have to develop new methods for calculating trajectories and command functions; what works very well for fixed robots or wheeled robots simply does not apply when flying.

Especially in terms of stabilization?
J.C.: With mobile manipulators on the ground, the control of the arms and of the mobile platform are normally handled separately—disturbances associated with arm movements are negligible, or at least easily controlled. During flight, however, if the arm moves, the platform must adjust accordingly in real time. Indeed, it must be capable of predicting any changes required even before the arm begins to move. It must anticipate the impact that such movement will have on the dynamics of the machine as a whole.

Our aerial robots can manipulate objects, but  also maintain physical contact with their environment.

So when a command is sent, before it is executed by the robot, the platform must adjust its flight position?
J.C.: Yes, this type of system is far more interconnected. We cannot in fact see the flying platform and the arm as separate systems; they must be conceived as a whole. If each part is controlled individually, the overall behavior of the robot won’t be good. We therefore have to develop new control methods. Problems must also be addressed in terms of motion planning and of system design so as to facilitate controllability. For all this, we have benefitted from the arrival of a specialist in aerial robot design and control, Antonio Franchi, a CNRS researcher who completes our set of skills (reasoning aspects, movement algorithms and perception) and allows us to build and test robots directly at the LAAS instead of at our partner facilities.

So for the robots that you’re developing for pipe inspection in the oil industry: what tasks are they required to perform?
J.C.: Corrosion is assessed, for example, by analyzing the walls of the pipe, which is impossible using the naked eye or a simple camera. This is done using a sensor that has to be moved while maintaining contact with the pipe. The real difficulty is that maintaining contact requires to control the interaction force to ensure that the sensor won’t slide off the pipe. Our research in this area is now well advanced. Our aerial robots cannot just manipulate objects, but can also maintain physical contact with their environment.

TiltHex equipped with a sensor

About Share
About
Close
Description:
The video illustrates an inspection task using a fully-actuaded hexarotor developed at LAAS-CNRS (which we have called TiltHex) equipped with a sensor. The sensor has to be positioned at several points on a pipe to be inspected.
Année de production:
2017
Durée:
01:29
Réalisateur:
LAAS/CNRS
Producteur:
LAAS/CNRS

So many different types of robots are needed?
J.C.: We are building and testing four prototypes at the same time. The first is a classic quadrotor, like those that are commercially available for photography, in which the motors are aligned. We have mounted on-board handling capacity in the form of a small arm. Although relatively inexpensive, this type of system is limited in terms of mobility and payload. The second is a platform with more than 4 rotors—6 or 8 —in which the axes are not aligned. They are so-called “fully actuated” platforms and both their position and orientation can be controlled. By way of comparison, a normal quadrotor is like a car that can move forward or backwards and turn, but cannot move sideways. A fully-actuated aerial robot has complete freedom of movement—we can command it to remain in a fixed position, but at a pitch of 30° for example. This allows us to install the sensor directly on a fixed end-effector without any need for an articulated arm.

And the two others?
J.C.: One of our partners is working on an autonomous helicopter, which is about 3 meters wide, equipped with a large industrial-type handling arm. While this poses a number of problems in terms of civil aviation standards and is fairly costly, it can carry far larger payloads. The fourth type is completely different system developed at the LAAS, which we have named “FlyCrane.”

About Share
About
Close
Description:
The FlyCrane is an aerial manipulator developed at LAAS-CNRS consisting of three flying robots (three quadrotors in this case) connected to a platform (on which and end-effector can be installed) by three pairs of cables.
Année de production:
2017
Durée:
01:22
Réalisateur:
LAAS/CNRS
Producteur:
LAAS/CNRS

A flying crane?
J.C.: Yes, this system comprises three normal quadrotors carrying a platform suspended on six cables. This platform lets us transport another type of robot to the pipes—a robot measuring 20 cm or so with magnetic wheels that can inspect the pipes and then return to the flying platform.

Will these aerial robots ultimately be able to carry out repair work as well?
J.C.: We’re not yet that far ahead. Such work requires considerable force—several tens of Newtons—which is beyond the capability of our current platforms. We can change a sensor or indeed a transmitter battery. We may even be able to perform minor welding operations in situ. But replacing a section of piping is far more complicated. But the aerial robot saga is still in its early stages.