Raoul Wallenberg (seated) at the Swedish legation, with his Hungarian Jewish co-workers in Budapest (1944). He provided thousands of Hungarian Jews with Swedish protective passes.
MEMORIAL DE LA SHOAH
Share
Share
Seventy-one years after he disappeared in Budapest, the Swedish diplomat Raoul Wallenberg, who saved tens of thousands of Jews from deportation by giving them Swedish papers, was officially declared dead by the government of his country.

Fabrice Virgili1 and Annette Wieviorka,2 you supervised the preparation of the collective French-language book “Raoul Wallenberg, Saving the Jews of Hungary."3 What was the situation like in Budapest when Raoul Wallenberg arrived there in 1944?
Annette Wieviorka: From the spring of 1944, the situation in Hungary became very peculiar. When Adolf Eichmann and his men entered the country, on March 19, 1944, Hungarian Jews were Europe's last large community to have remained essentially intact. In only seven weeks, as mentioned in our collective work by the British historian Tim Cole and Tal Bruttmann from France, half a million Jews were deported to Auschwitz, with the cooperation of the Hungarian police. Under Regent Miklós Horthy, the country had been a German ally since the beginning of the war, but its loyalty had started to waver in 1943, and Germany finally invaded its Hungarian ally in March 1944. Officially, Horthy remained in power, but on March 21, Eichmann took charge in Budapest.

Fabrice Virgili: One of the reasons for the Nazi invasion was also that Hungary’s Jews had not yet been deported, thus far escaping the “Final Solution.” Eichmann was therefore sent to set up a deportation system from Hungary to Auschwitz-Birkenau (Poland). In a very short period of time, spanning from March to July 1944, more than 400,000 Hungarian Jews were deported. Meanwhile, the Allied Forces began bombarding Budapest and other cities in western Hungary. As a result of this pressure, the deportations were halted in July. That was when Raoul Wallenberg arrived in Budapest. 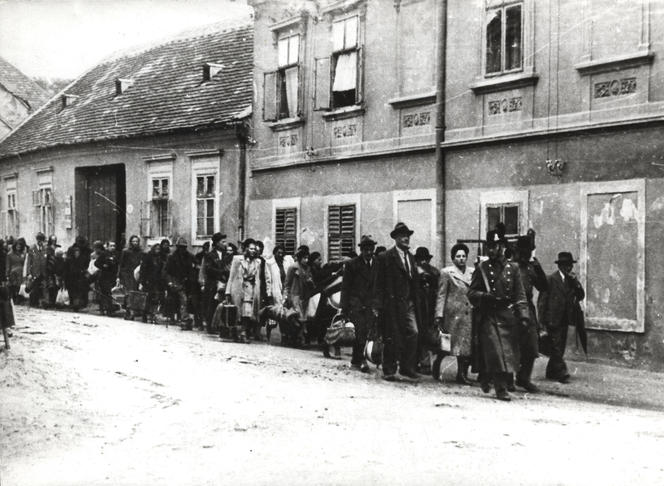 Jewish populations displaced to the ghetto in Hungary in 1944. 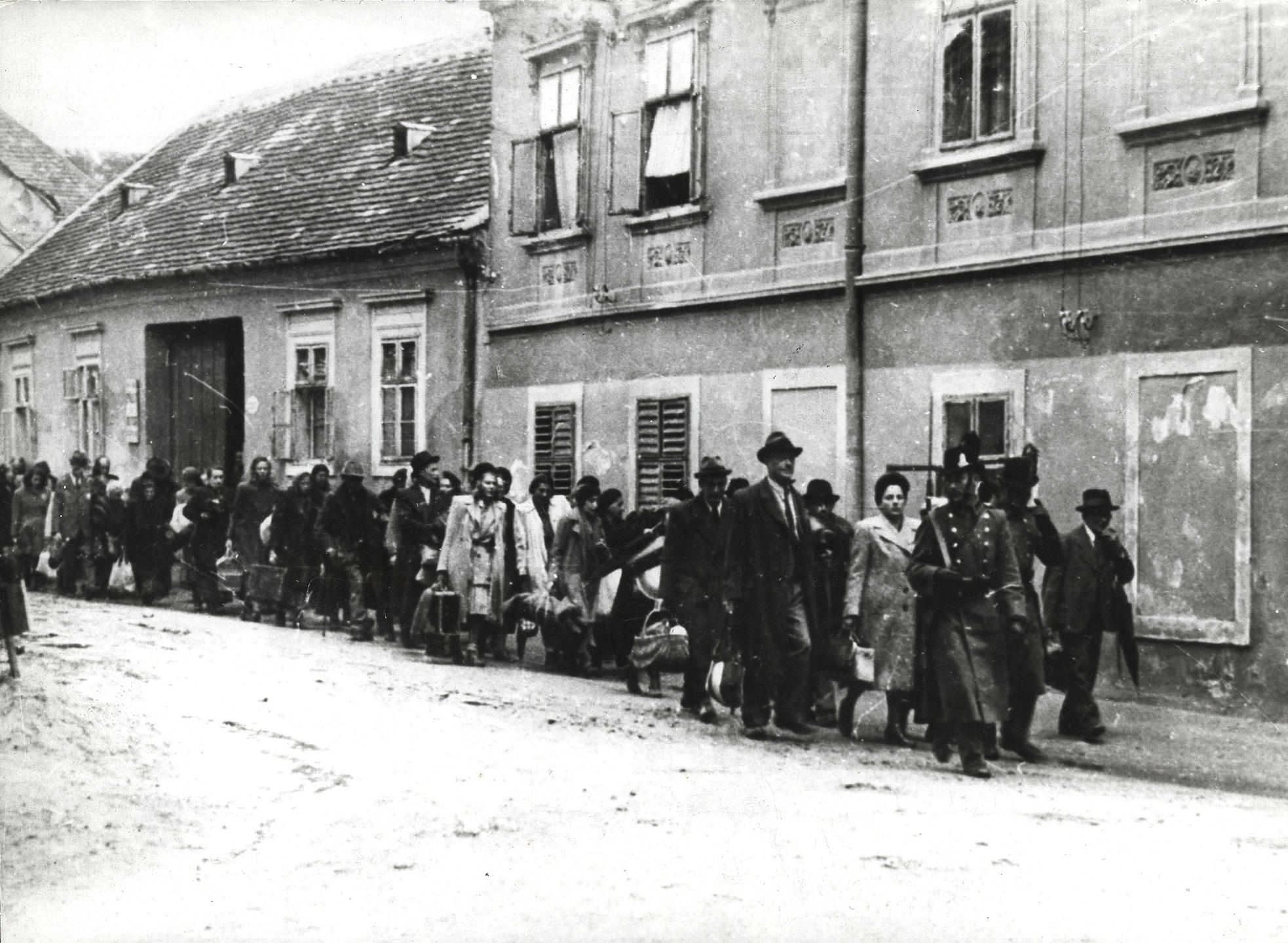 Why was he sent to Hungary?
F. V.: First, let me point out that before he went to Hungary, nothing about Wallenberg’s career or personality could predict the role he was about to play. He had studied architecture. He came from an affluent family that was prominent in the Swedish economy. In the course of his career in business he had traveled the world and mingled with the elite from several countries. And as a citizen of neutral Sweden, he continued to do so in wartime Europe. Because of his extensive connections, he was approached by the World Jewish Congress and asked to save a Jewish population mainly concentrated in the city of Budapest by then—those living outside the capital having already been deported or killed. It is important to bear in mind that at this point, in 1944, the tide had already turned against Germany after the battle of Stalingrad, and there were many attempts at negotiations, most of which failed. Along with representatives of other neutral countries, like Switzerland, the Swedes had launched appeals to Nazi Germany and the Allied Powers. Funds were raised for Wallenberg  to save a few dozen or a few hundred Jews in Budapest. When he got there, he did not suspect how desperate the situation was. The events that followed led him to play a much greater role than initially planned.

A. W.: It is also worth noting that in Sweden, the name Wallenberg represented one of Scandinavia's most powerful industrial and financial groups. Raoul Wallenberg’s international education had taken him all over the world, to the US, Palestine, South Africa, and previously to Hungary, in 1938. His connections with the US, and the fact that he came from a neutral country, account for the fact that he was chosen for the mission, which was probably inspired by the Americans.

What role did he end up playing after July 1944?
A. W.: Paul Gradvohl, a historian specialized in modern-day Hungary, contributed a study of Wallenberg's achievements in Budapest between July 1944 and January 1945, as he attempted to save as many Jews as he could. At that time, the deportations had come to a halt but threatened to resume at any time, and massacres were still going on in the city. The Nazis remained determined to kill all the Jews left in Hungary. Regent Horthy had been replaced. Eichmann returned to Budapest and started a race against the clock as the Red Army approached. In the autumn of 1944, Wallenberg began issuing Swedish citizenship certificates to protect as many of the city’s Jews as he could—even though this meant putting his own life in constant danger. On January 16, 1945, the Red Army entered Budapest, putting an end to the risk of deportation for Hungary’s surviving Jews. Eichmann had left. But on January 17, Raoul Wallenberg was arrested by the Red Army. 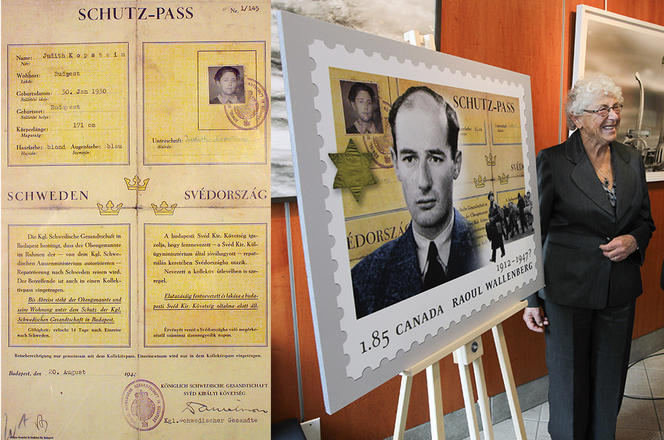 Left: Schutz-Pass (protection passport) given to a 14-year old Jewish girl called Judith Kopstein in 1944. Right: Now 83, she poses in front of a Canada Post Stamp commemorating Raoul Wallenberg, who saved her from deportation. 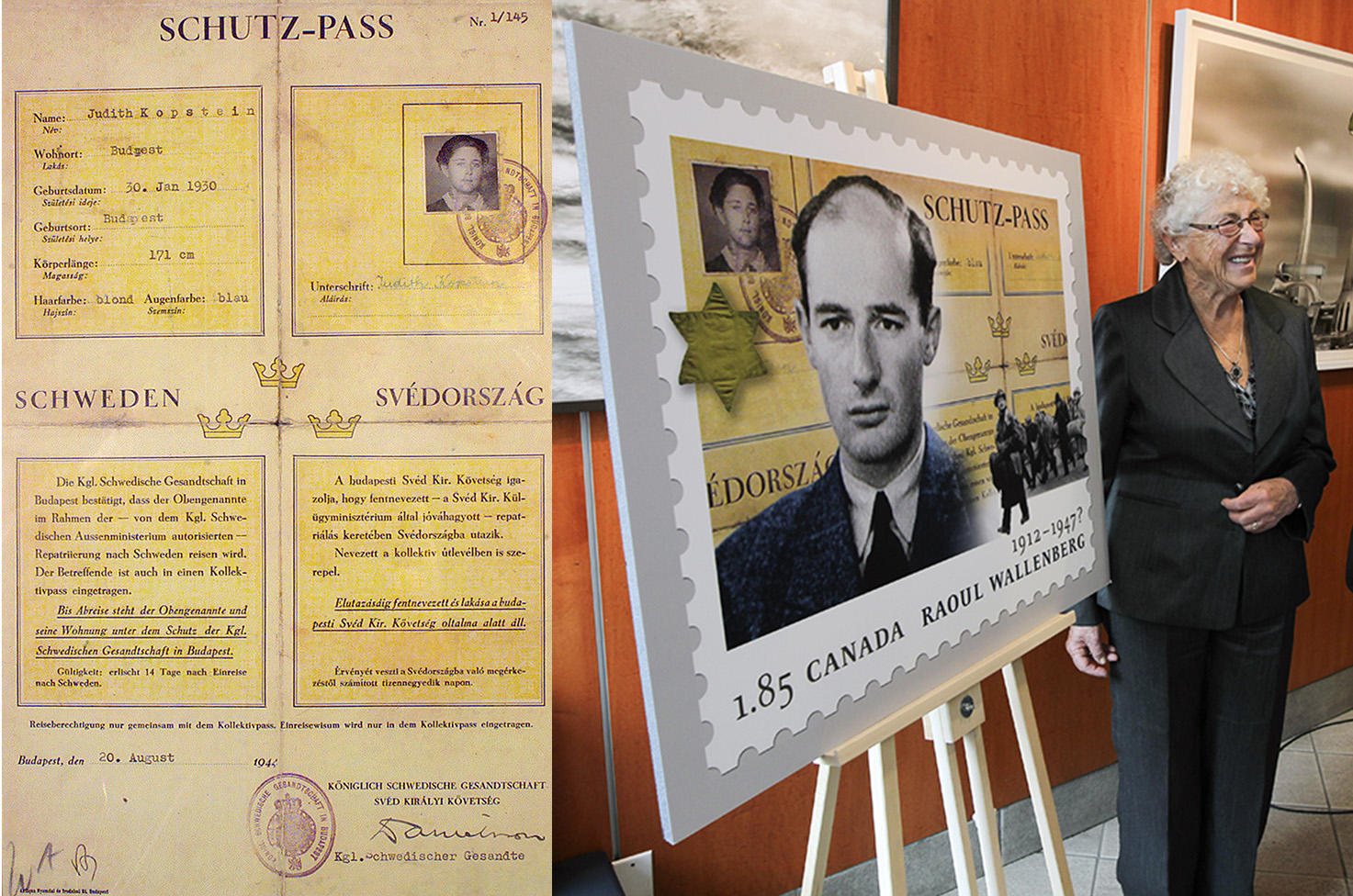 Left: Schutz-Pass (protection passport) given to a 14-year old Jewish girl called Judith Kopstein in 1944. Right: Now 83, she poses in front of a Canada Post Stamp commemorating Raoul Wallenberg, who saved her from deportation.
APIC-HULTON ARCHIVE/A.-F WALLACE-TORONTO STAR/ GETTY IMAGES
APIC-HULTON ARCHIVE/A.-F WALLACE-TORONTO STAR/ GETTY IMAGES
Share
Share
For the Soviet authorities, Wallenberg was an ambiguous figure, whom they suspected of having ties with US intelligence.

Why was he arrested? Do we know what happened to him afterwards?
F. V.: There are several hypotheses about his disappearance. We know that he was taken to Moscow shortly after being arrested—there are records of this dating from May 1945. Why Moscow? Because for the Soviet authorities, Wallenberg was an ambiguous figure, whom they suspected of having ties with US intelligence. Of course, the Cold War was still in the future, and the US and the Soviet Union were allies, but Wallenberg was a “neutral” agent whose mission was not clearly understood, and he had money in his possession. In addition, he had been in talks with Eichmann and the Nazis in an attempt to save Jewish lives. In any case, the Soviets felt that they had reason to distrust him. He was arrested and secretly taken to Moscow—that much is known. We presume that he was either killed immediately or died in a KGB prison in 1947. According to the Soviet authorities, his official date of death is July 17, 1947. Numerous investigations and studies suggest that he did indeed die on that day. Nonetheless, and this is what makes his case so unusual, the Soviets took a very long time to admit it, and never released any conclusive documentation. The first person to announce Wallenberg’s death was Khrushchev in 1957. He said that he had died of a heart attack but did not provide any solid proof.

A. W.: Raoul Wallenberg was arrested by the Red Army on January 17, 1945. At that point, the war was not yet over. He may have been taken for a spy. At first he was detained in Budapest, and we know for certain that he was later held in Lefortovo Prison in Moscow, before being transferred in March to the KGB headquarters in the Lubyanka building. After that, it is difficult to keep track of him. He became something of a legend, and some gulag prisoners claimed to have crossed his path. Since there is no official record, all kinds of stories have emerged. For example, a man who had been imprisoned in Lviv in Ukraine (when it was part of the USSR) said he had  “talked” to Wallenberg by tapping out coded messages on the pipes, as prisoners were known to do. After Hungary, he was probably held in three different places in the Soviet Union.

Why had he still not been officially declared dead?
A. W.: Mainly because there has never been absolute certainty about his death, since no medical record has ever been found. According to the official Soviet version, he died in Lubyanka in July 1947. Was he executed? We can’t answer that question. Wallenberg was born in 1912, so he would be well over 100 years old today, which makes it essentially certain that he is now dead. A request was submitted in April to the Swedish fiscal administration to have him officially declared dead unless he reappears before October 14, 2016.

It seems strange that neither Sweden nor the Western Allies have done anything to solve the mystery. Why such “reticence”?
F. V.: Wallenberg had the misfortune of being caught up in a series of contradictions, due primarily to Sweden’s role during World War II and the years that followed. Sweden was a neutral country but it traded extensively with the Third Reich, supplying the industries of Nazi Germany, for example with ball bearings for aviation. In fact, the Swedish economy depended very heavily on trade with Germany. Towards the end of the war, when the Third Reich was losing, the Allies put tremendous pressure on Sweden to cut off its relations with the country. Following German defeat, Sweden eventually started cooperating with US and Soviet interests, and Raoul Wallenberg's case became part of a political process aimed at re-establishing good relations with the USSR. Sweden did not press very hard for clarifications, and business with the Soviet Union became more important than Wallenberg’s fate. Besides, unlike his immediate family, the people in charge of the Wallenberg Empire did not go out of their way to have him freed. Wallenberg nonetheless became an emblematic figure. In 1981, he was named an honorary citizen of the US, a distinction so rare that it had only ever been granted to one other foreigner, namely Sir Winston Churchill.