Home / Articles / On the Sources of Secularism in France

On the Sources of Secularism in France

Home / Articles / On the Sources of Secularism in France

On the Sources of Secularism in France

On June 19, 1960, 350 000 people demonstrate in Vincennes to demand abrogation of the Debré law conferring on private religious teaching the status of a “public education service.”
DELIUS/LEEMAGE
Share
Share
In English the word is ‘secular,’ but the French equivalent ‘laïque,’ which features prominently in the opening paragraph of the French constitution has a different meaning to the French today. The historian Philippe Portier explains.

“Today, ‘laïcité’, the French variation of secularism, is characterized by two major notions: the independence of individual subjects and the neutrality of the state,” explains Philippe Portier, director of the Sociétés, religions, laïcités group.1 “The former notion is based on freedom of conscience and opinion, in other words, on the freedom of individuals to construct their existence independently of the order of God, while the latter is based on the state remaining completely separate from any religious interpretations of the world.”

And this word is not new, with the first usage being found in biblical texts drawn up in Greek. Within the Church, the Greek word “laos” designates the people as distinct from priests. The term “lay” or “layman”—in French, laic—refers to any person neither belonging to the Church nor in orders, in contrast with “clergy” and “cleric.” Since the 19th century, in France, the term laïque distinguished the people who want to separate state and church in order to protect the freedom of conscience.

The word “laïcité” appeared in 1871, and was identified by French lexicographer Émile Littré in an except from the newspaper La Patrie. However, it was not until 1878 that the concept took on its real shape and was introduced by the educational philosopher Ferdinand Buisson in his Dictionary of Pedagogy, considered at the time as the “bible” of the secular school movement.

1789: France abolishes the crime of blasphemy

In France, the Edict of Nantes of 1598 was the first manifestation of religious tolerance granting to Protestants the freedom to practice their religion in certain areas as well as the acces to civil rights. But the political imaginary was still the one of the unity of faith, and this text has been abolished in 1685.

It was during the Age of Enlightenment that the notion of secularism, linked with the notion of pluralism, took its real form through the efforts of Diderot, Voltaire and Condorcet. Man was deemed free to determine the conditions of his own existence. “Sapere aude - Dare to think for yourself!” is the motto of the Enlightenment.

In 1789, with the French Revolution and the principle of self-determination came the first legal treatises on secularism. Article 10 of the Declaration of the Rights of Man states that “No one may be disturbed for his opinions, even religious ones, provided that their manifestation does not trouble the public order established by the law,” while article 11 enshrines “the free communication of thoughts and opinions…” “It was at this time that the crimes of divine lèse-majesté and blasphemy were abolished and divorce authorized,” explains Portier. “In 1792, civil status became a state prerogative. The foundations were set out, and secularism, as we have just described it, was embraced by all subsequent regimes in France.” 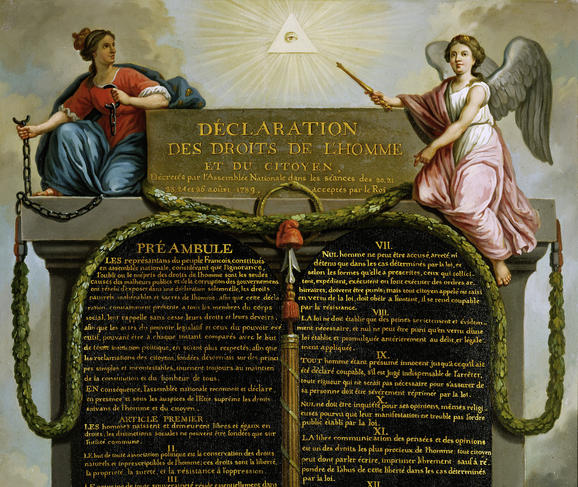 The Declaration of the Rights of Man and of the Citizen, adopted in 1789, proclaims that “No one may be disturbed for his opinions, even religious ones, provided that their manifestation does not trouble the public order established by the law.” 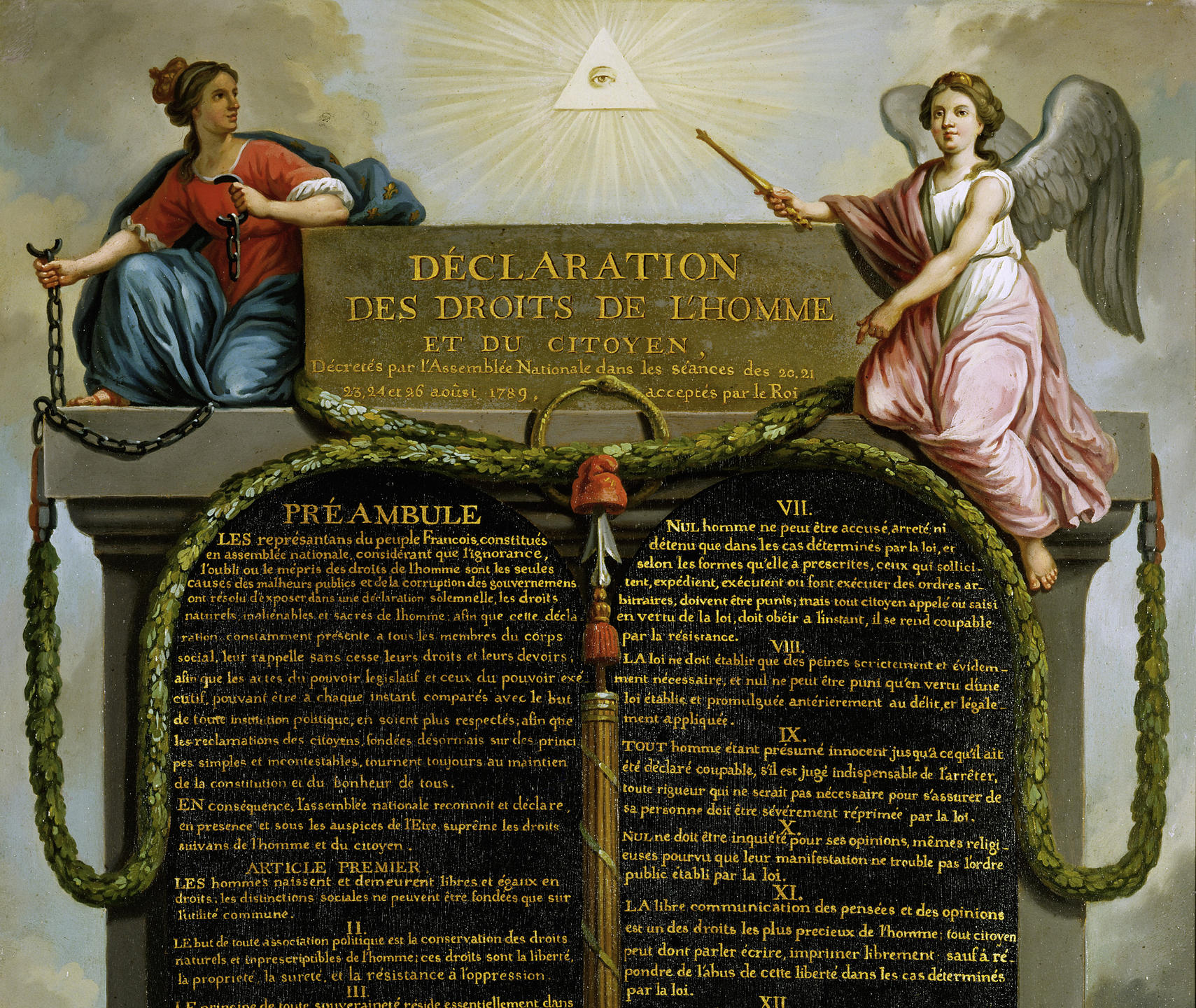 The Declaration of the Rights of Man and of the Citizen, adopted in 1789, proclaims that “No one may be disturbed for his opinions, even religious ones, provided that their manifestation does not trouble the public order established by the law.”
E. LESSING/AKG-IMAGES
E. LESSING/AKG-IMAGES
Share
Share

At that point, the secular State, free of clerical influence, distanced itself from all theological concepts. The French Revolution set up the so-called “Constitutional” Church requiring a civil oath of allegiance to the Constitution by the clergy. Then in 1794, the National Convention withdrew funding of the Constitutional Church, stipulating in 1795 that the Republic would provide no clerical salaries for any religion, a ruling that foreshadowed the separation of church and state. “The Concordat of 1801 continued to press the idea of a neutral state not subservient to God,” explains Portier. “Napoleon and his minister, Portalis, clearly set out the respective domains of the Catholic Church and the State, and this delineation remained in place until the law of 1905. While upholding the sovereignty of the state, the Concordat system retained religion as the basis of social morality. In the celebrated formula of Portalis: ‘The State grabs the thief’s arm while religion transforms his heart.’” We must specify that all along the 19th century, the state recognized and subsidized officially four religions: catholic, reformed, lutheran, and judaic.

It was between 1850 and 1880 that the principle of a secular republican school system took shape, marking the first concrete step towards separation of church and state. “Education is the priority concern, since the aim is to transform individuals into rational citizens,” comments Portier. “But, in the conservative Government’s thought,  the notion survived that a society cannot exist without drawing inspiration on public morality from the world of religion.” This is clearly evident in the Falloux law of 1850, whose primary school programs continued to include ‘moral and religious teaching.’ Victor Hugo pleaded in vain against this law before the French National Assembly: ‘I want to see state and church clearly separated (…) There should be no overlap between priest and teacher.’ 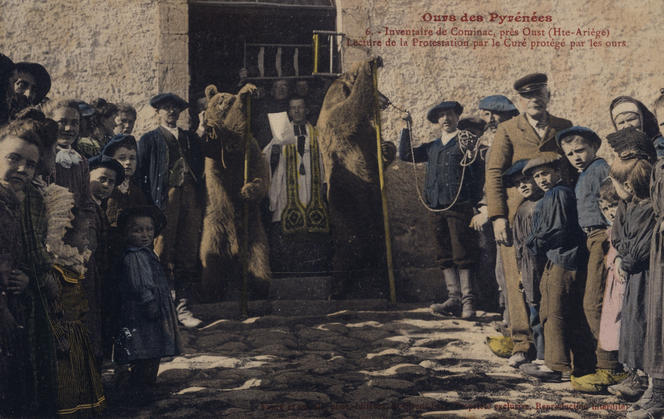 Inventory of Cominac in the Haute-Ariège region on December 9, 1905. The faithful protect their local priest with trained bears as he reads a proclamation against the inventory of church property following introduction of the law of separation of Church and State. 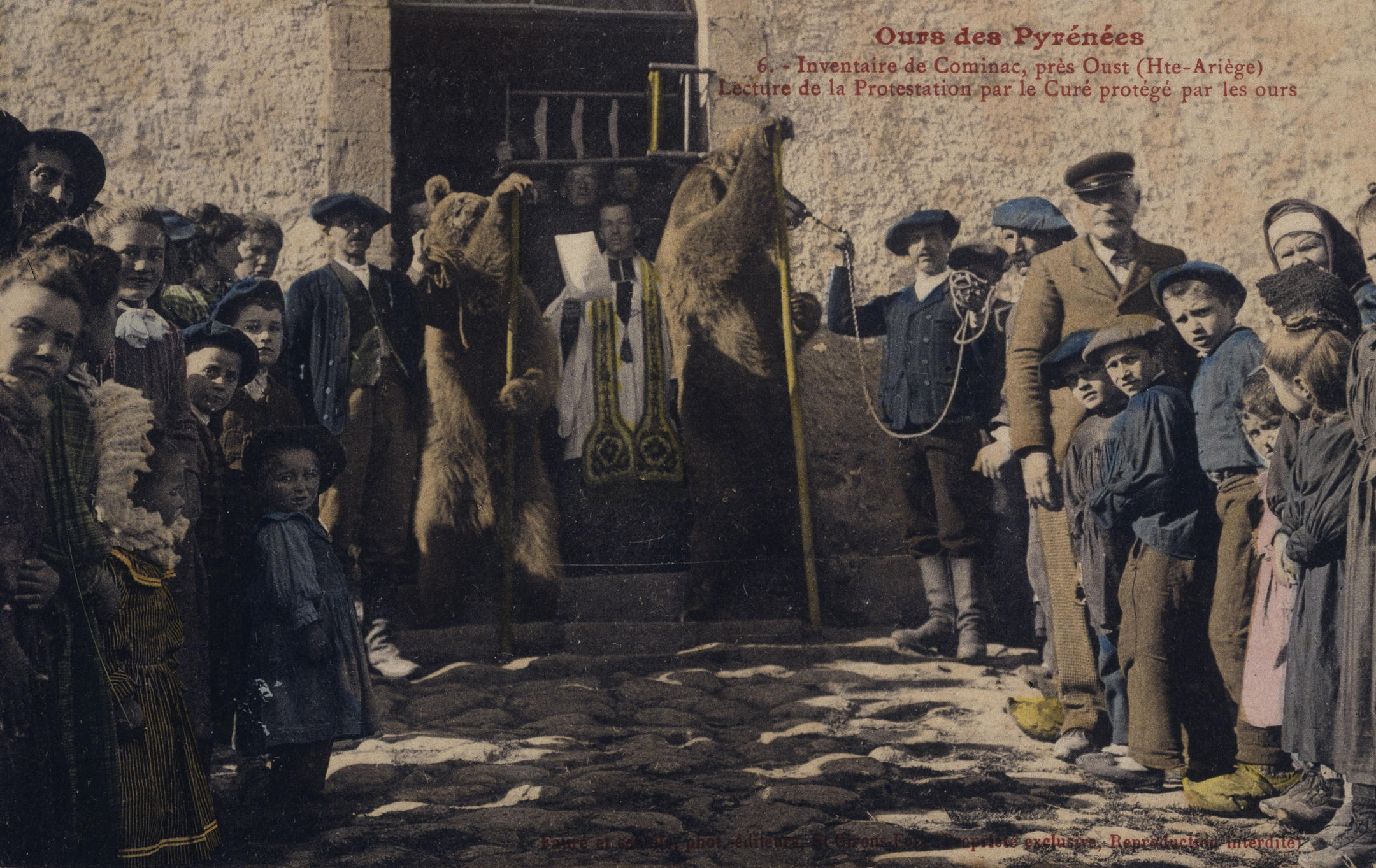 Inventory of Cominac in the Haute-Ariège region on December 9, 1905. The faithful protect their local priest with trained bears as he reads a proclamation against the inventory of church property following introduction of the law of separation of Church and State.
AKG-IMAGES
AKG-IMAGES
Share
Share

In this fight for secularism, we should also note the ephemeral Paris Commune of 1871, which in its Official Journal noted that: “It is especially urgent that schoolchildren be taught that all philosophical ideas are subject to scrutiny by reason and science.” Ten years later, in1882, Jules Ferry, Minister of Public Instruction, submitted to parliament the basis of a free and secular school system, as well as mandatory education.

“In 1905,” adds Portier, “the adoption of the law on the separation of church and state introduced the principle of a strict separation between the private and public spheres.” This law replaced the Concordat system of 1801-1802. The first article of the law states that “the French Republic guarantees freedom of conscience and freedom of religious practice” while article 2 adds that “it will provide neither salaries nor funding for any faith.” It declares that the religious institutions will be in charge of the upkeep of places of worship. However, due to the resistance of the catholic church, the catholic places of worship built before 1905 will be upkept by the state.

This secularism was consolidated in 1936-1937 by Jean Zay, the National Education Minister of the Popular Front, via two circular letters concerning the prohibition of political and religious propaganda in schools. It was nevertheless challenged in 1940 by the education program of the Vichy regime, based on the new motto “Travail, Famille, Patrie,”(‘Work, Family, Fatherland’) with the reintroduction of the notion in schools of duty towards God and of references to the Christian civilization. It was not until the Constitution of 1946 and the inclusion of the preamble thereto in the constitution of the 5th Republic of 1958 that secularism entered the French constitution.

Similarly, there was some indecision over article 2 of the law of 1905. “The State, particularly with the Debré law, decided to fund private schools under contract, making the demarcation between Church and State less clear-cut,” notes Portier. Beginning in the 1980s, the long-term integration of Muslim populations in France began to directly call into question the law of 1905. The latter does not allow for funding of mosques, which did not exist in metropolitan France when the law was passed, and the cost of their construction is therefore incumbent on the believers themselves, resulting in de facto inequality with religions established earlier. It is frequent now to see some local authorities subsidizing by different means the  building of religious buildings. For a part, this new practice has been authorized by the Conseil d’Etat, the highest administrative Court.

In 1989, the “Islamic headscarf affair” in which three young girls were expelled from a school in Creil near Paris for refusing to remove their headscarves, underlined the problem of wearing conspicuous religious symbols, a question that had never previously arisen and was thus not covered by any legal provisions (if we except two circular letters in one circular letter concerning the prohibition of religious propaganda in schools in 1937).

“Since then, there has been a tendency towards interpenetration of the public and private spheres. With the law of 2004 that banned wearing conspicuous religious symbols in schools and that of 2010 that prohibits covered faces in public spaces (the so-called “full-veil” ban), the French state intervened in spheres hitherto left to the “independent discretion of individuals,” thus calling into question the separatist aims of the law of 1905,” observes Portier. At the same time, the proliferation of newly created institutions clearly indicates the degree of interest by the state on this issue: the Higher Council for Integration, (Haut Conseil à l’intégration) created in 1989 and then axed in 2012. We must add the Observatory on Secularism, first proposed by then French president Jacques Chirac in 2004, and really created in 2013. 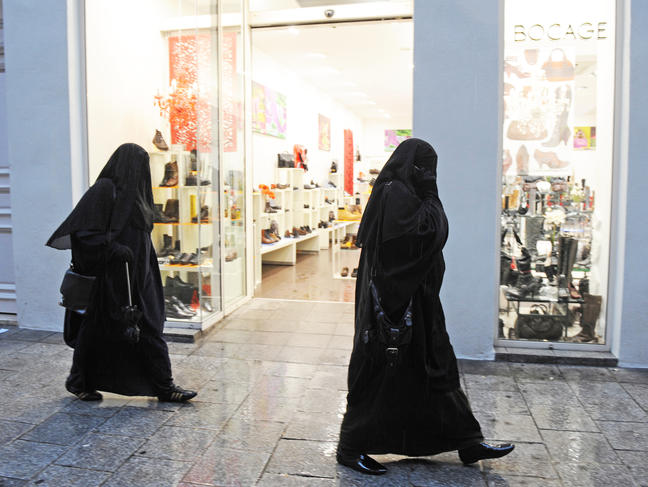 Women wearing full veils in the streets of Marseille in December 2009. Since 2010, the wearing of full veils in public places is prohibited France and is punishable by a fine. 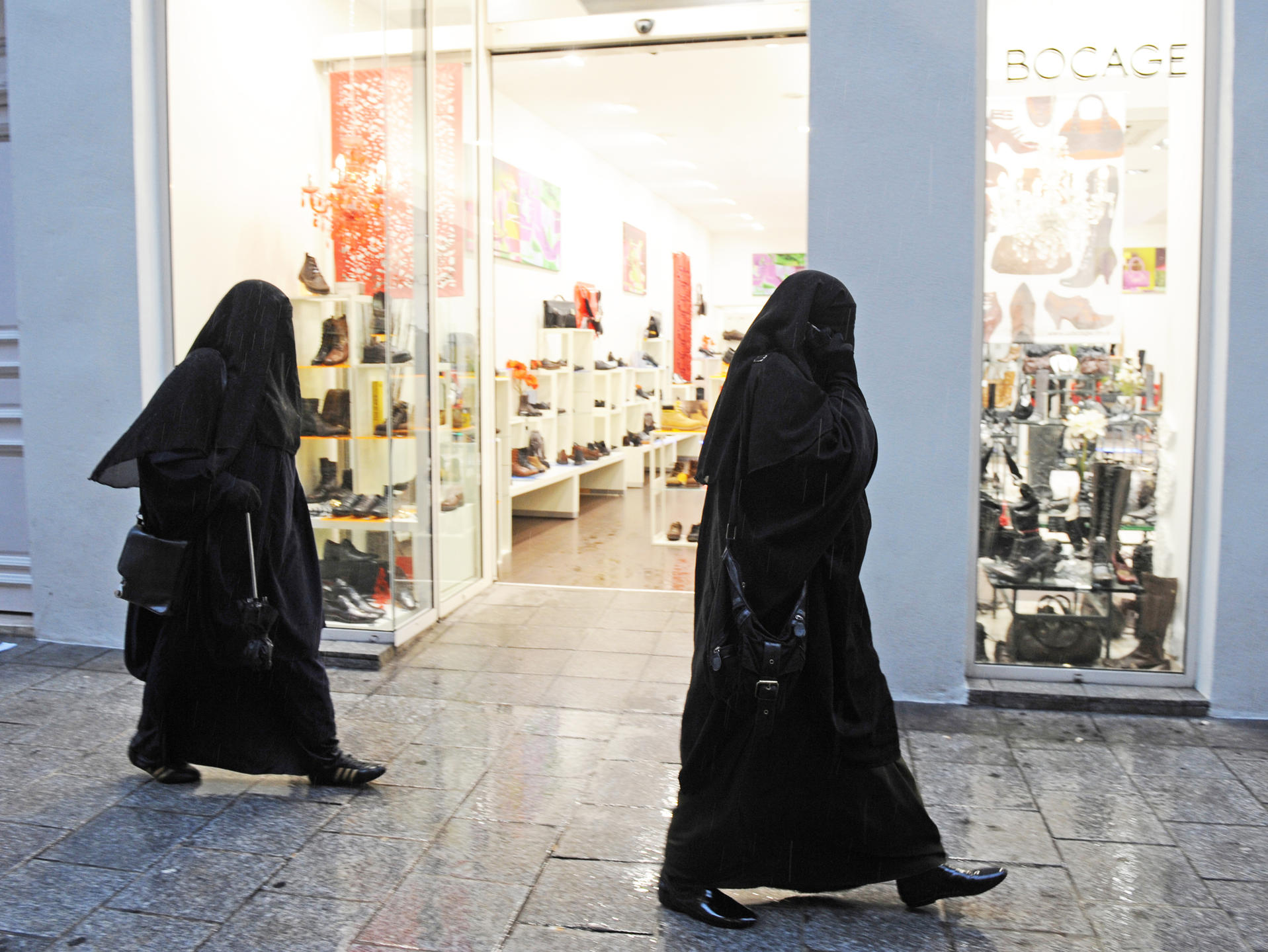 More than a century after the law of 1905, secularism is now the subject of divergent interpretations, which are viewed by some as dangerous back-pedaling and by others as sensible adaptations. “The word secularism now has multiple meanings and covers three principal notions,” explains Portier. “First, a differential approach that seeks to grant the right of difference to each individual, as championed by the Terra Nova think-tank and sociologists such as Alain Renaut. Second, the classical secularism embodied by the French Fédération nationale de la libre pensée, (French National Federation for Free Thought) based on the principle of non-intervention when it comes to religion. Finally, controlled secularism, which is currently the most favored notion.” The latter approach seeks to impose limitations on religion in the private sphere. Debate is essential since what is at stake is quite simply the fundamental rules of peaceful cohabitation within French society.

Anne Brucy has worked for a number of French media outlets: France Culture, France Inter, and TV5. After heading TV station France 3 (North) and the 44 radio stations that make up France Bleu, she now works for a variety of media including CNRSleJournal/CNRSnews. Her main areas of interest are citizenship, regions, information and education...