Home / Articles / Is the Oasis a Mirage?

Is the Oasis a Mirage?

Home / Articles / Is the Oasis a Mirage?

Is the Oasis a Mirage?

VITANOVSKI/FOTOLIA
Share
Share
Far from immune to the effects of globalization, the oases of the world are changing. Whatever their many forms, water is always the determining element.

Found in nearly every language, the word “oasis” is universal. Etymologically, it has its roots in Coptic, the tongue of ancient Egypt, and originally designated any inhabited place. Over the centuries, it came to mean an enclave, a patch of fertile land around an isolated water source, and later a stopping point on the routes taken by nomads, armies and traders. In our (post-)colonial collective imagination, an oasis brings to mind an island of greenery in a sea of sand, with dromedaries grazing in the shade of date palms.

Yet this cliché is outdated: geographers, never ones to indulge in Orientalist romanticism, are loath to perpetuate such mirages. They see oases in the coastal deserts of South America and the mountains of Central Asia that bear little resemblance to the old stereotype.

Beyond demographic, land-use and financial changes, the very notion of the oasis is now evolving.

In modern oases, which are more difficult to identify and therefore to enumerate, water is still the driving force behind the evolution of irrigated perimeters, actions by national governments, investments by the agri-food industry or private landowners, the rise of tourism, the decline of small farmers and the arrival of neo-rural populations. But beyond these demographic, land-use and financial changes, the very notion of the oasis is now evolving. The French geographers Emilie Lavie1 and Anaïs Marshall2 have published a book entitled Oases and Globalisation (Ruptures and Continuities),3 a compilation of the key papers delivered at a forum that they hosted in Paris in 2013, in cooperation with the PRODIG4 research unit.

The oasis: a concept

“We chose oases largely because they differ so greatly from one another,” Lavie explains, to which Marshall adds that in Peru, the term used to designate an oasis is literally “old valley.” “I found it interesting to include in our concept of oases the coastal valleys of Peru,” she says, “because they involve the same issues, namely land and water use, as well as the political decisions underlying the social management of water. Because it is a limited resource, we have to be careful how to share it so that everyone gets enough. In Peru, all of the former sand dune areas have been converted into fields of asparagus, onions or sugarcane—these are now irrigated interfluves—called ‘los intervalles’ (between valleys). Are these new spaces also oases?” 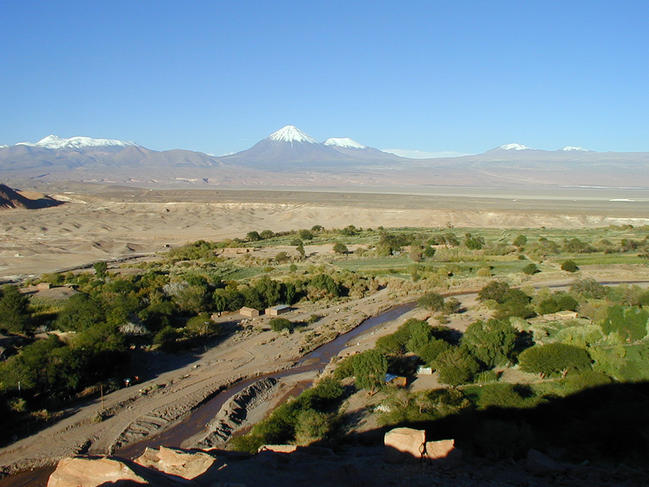 Oasis of San Pedro de Atacama in Chile, one of the few populated areas in this extremely dry desert (background). 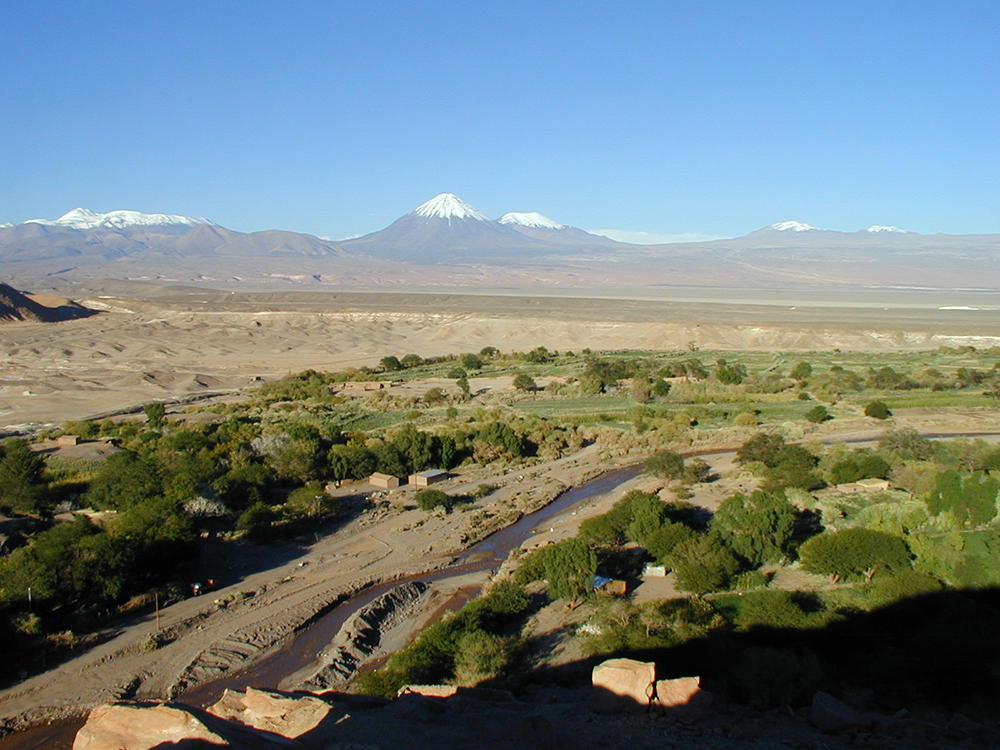 
In fact, what exactly is an “oasis”? According to Alain Cariou,5 a geographer who took the floor at the conference to talk about his work on the singular case of the Liwa Oasis in the United Arab Emirates, the term is a source of debate among geographers, agronomists and anthropologists alike. “For some, it has become obsolete with the introduction of cutting-edge agricultural systems,” he says. “This is no longer about the traditional oasis for agriculture that is similar to intensive gardening, with palm trees and a very complex agrosystem. Now we see more irrigated perimeters and single-crop, highly mechanized farming, no longer aimed at growers' own consumption or at local populations, but destined for a market economy.

In those oases, the temperature can drop to –30°C in the winter—just like in the deserts of Chile.

The image of the sand desert with palm trees is a warped perception from our colonial past. The concept of the oasis can be found throughout the huge swathe of arid land that extends diagonally from the Sahara to the Chinese deserts, including the Arabian Peninsula. But in Russia, the image of the oasis is that of Central Asia, with poplar trees, streams running down the hillsides and mountains in the background, somewhere to grow crops like cotton. In those oases, the temperature can drop to –30°C in the winter—just like in the deserts of Chile.”

“We organized this colloquium in Paris in 2013 in order to meet with other researchers—including PhD students—in geography but also in other disciplines and get a different perspective on our fields,” Lavie reports. “The idea was to build a network, introduce a new generation of researchers and do away with clichés. We learned that some of us were working to redefine the oasis, no longer as a landscape but as a concept. Today, oases can be large irrigated areas around the original sites, with fewer owners but bigger plots of land, and the conveyance of water is handled privately instead of collectively. These are still oases—agricultural spaces in arid zones dependent on a single source of water—but the  whole configuration has changed.”

As an “island in the desert,” an oasis is easier to observe than other, less clearly delineated spaces. “In the southern regions of the world, globalization began to gain significant impact in the 1970s. Half a century later, we can study the resulting evolution, in parallel with decolonization. Water is still the issue, of course, but just as important is the ability to access it—and access to water depends on access to capital. In these large new irrigated perimeters, it is essential to have the financial means to dig a deep well, supply energy for powering the pumps, and to install a pressurized system for either drip or sprinkler irrigation. An oasis is nothing without irrigation. Failing a society that knows how to control water, how to adapt to seasonal and climatic variations, and how to manage the role of the city in relation to the countryside, this system is not sustainable in the long run,” Lavie comments.

Marshall confirms this point of view in her study of Peruvian oases. In the 1990s, the country opened its economic and real estate markets as a solution to its social-economic crisis, which attracted major agribusiness groups. “What seems interesting for me is to analyze their impact—both social and environmental,” Marshall says. “I have demonstrated that as much land has been reclaimed from the desert as lost in the old valleys. Companies buy plots while small farmers lose them—a phenomenon that is not limited to the oases.” 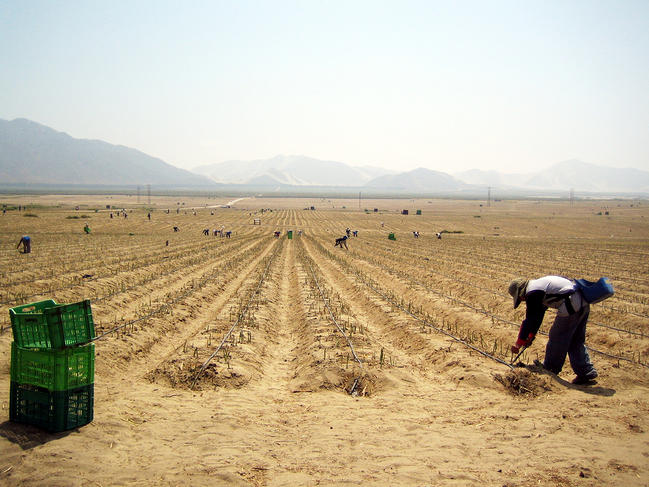 Production of asparagus in Virú, in the coastal desert of La Libertad (Peru). A state irrigation project has turned large areas of desert into agricultural land. 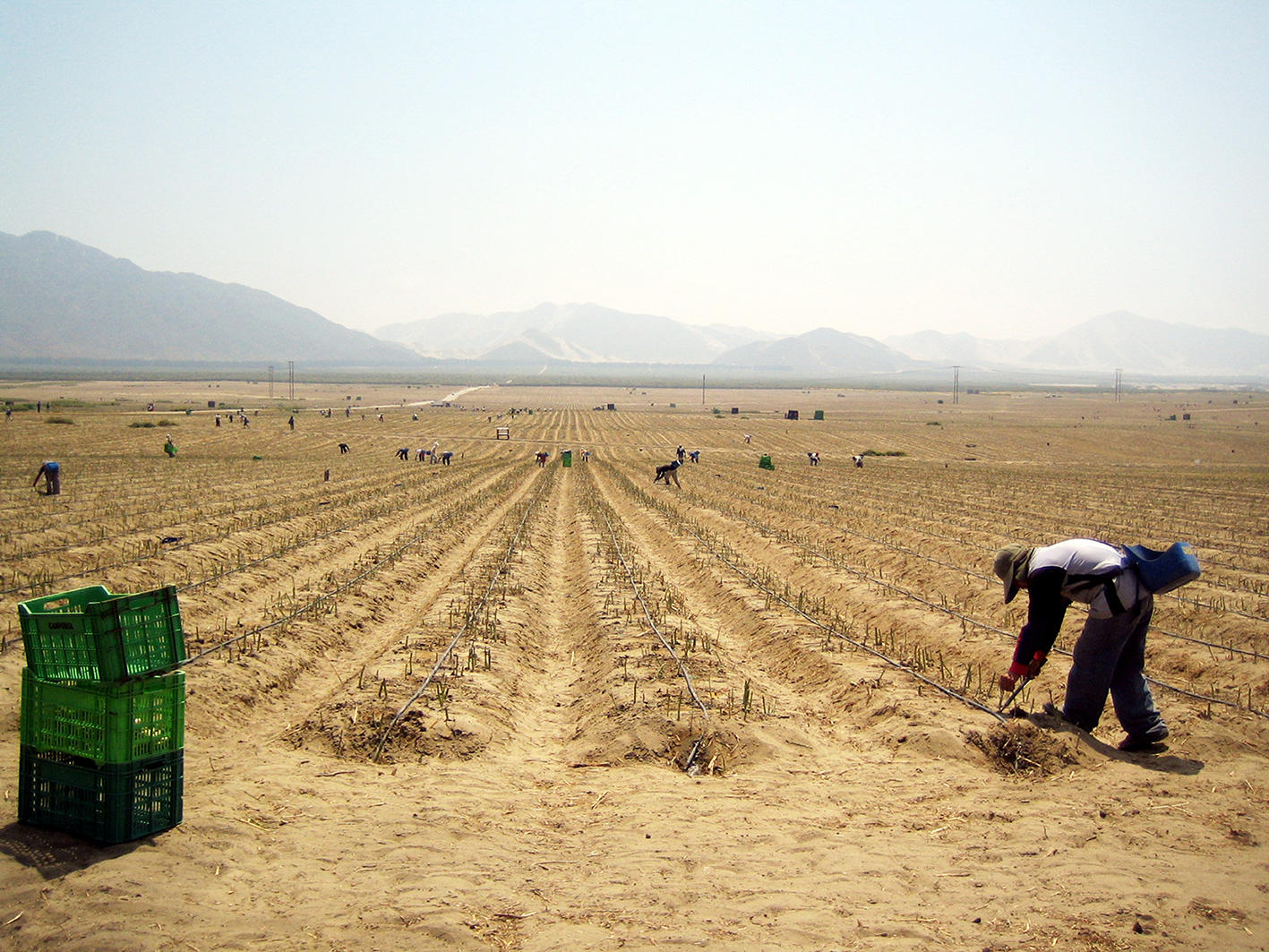 In terms of access to water, the Peruvian example shows that the corporate operations pump water from great depths, as far as 150 meters, to the point of depleting the water table and leaving nothing but salt water. “In a southern coastal valley,  companies have not only drastically lowered the local groundwater.” Marshall reports. “The relatively shallow wells of the small farms (dug up manually) have run dry, leaving farmers dependent on water from the irrigation channels, or gravity water, which means that supplies vary from season to season. There is plenty of water at periods of heavy rainfall in the Andes —but none during dry spells. Before, wells helped regulate the supply.”

Liwa: the end of a mirage

As Marshall explains, “safeguarding water supplies, especially by using pressurized irrigation systems, are being used to acquire land instead of preserving resources.” Intensive agricultural operations for export are steadily depleting underground water supplies. This is an especially sensitive issue in the countries of the Arabian Peninsula, and one to which the United Arab Emirates (UAE) has provided an original solution that could inspire its neighbors.

In the early 2010s, the UAE made a radical decision: to turn the Liwa aquifer into a gigantic natural reservoir of drinking water. Supervised by the German consulting company Dornier, the project was recently completed, setting an example that will be closely watched throughout the Arabian Peninsula. 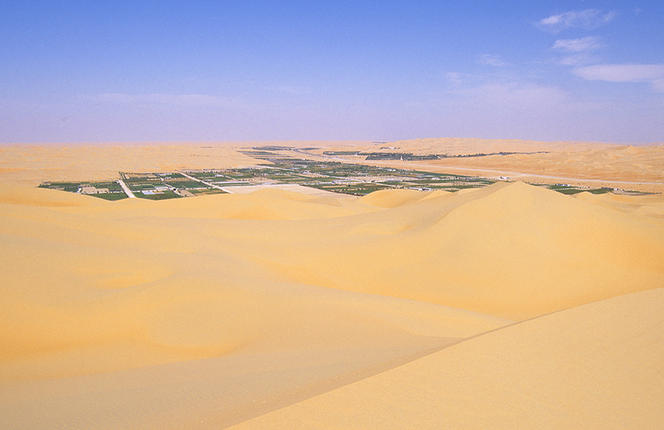 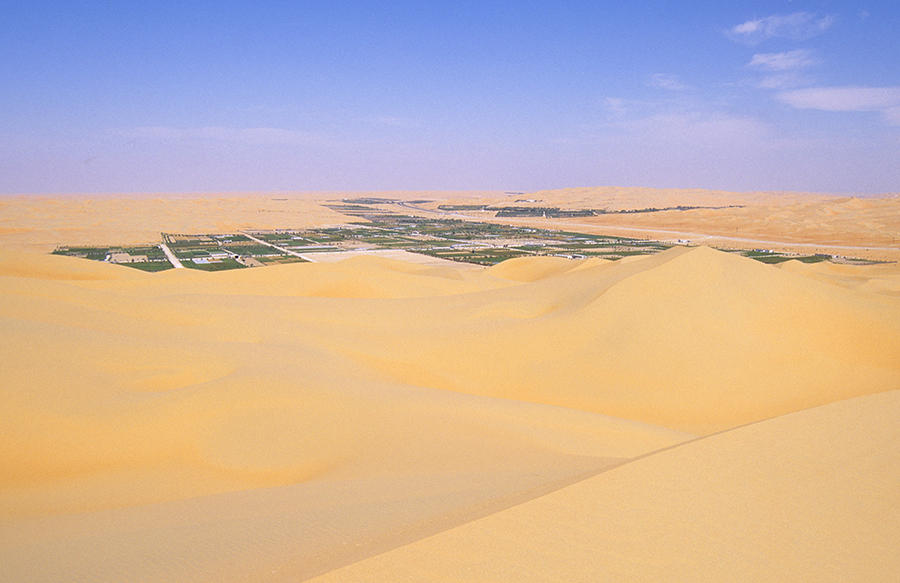 Until then, this precious water, which has lain underground for 18,000 to 32,000 years, was pumped out heedlessly to irrigate crops in the desert. But as the Emirates’ population grew, the situation changed: the water desalination plants in the Persian Gulf can only ensure a three-day supply for the residents of Abu Dhabi and Dubai. Cariou describes what was involved in this massive undertaking: “It took three years to refill the aquifer with artificially desalinated water. When I wrote an article about it in late 2013 the program had just started, and it was completed in early 2017. Today the reservoir has proved effective in the storage of drinking water and the UAE has demonstrated the possibility of building up strategic water reserves. At a depth of 100 meters, the water is very well protected—in fact, better than in man-made reservoirs. The aquifer is watertight and impervious. However, this water is now for urban use and is no longer available for agriculture.”

“This project calls into question several decades of frantic development in the deserts of the Arabian Peninsula, as well as North Africa and the rest of the world,” Cariou adds. “We have seen the deserts as territories to be conquered by irrigation in order to achieve food sovereignty. We wanted to ‘make them bloom.’ Today, we are faced with the economic and environmental failure of this policy.”

In other words, by “transforming” a natural reservoir into an artificial one, the country is returning, at great cost, to the original solution proposed by nature. Does this herald a rising trend? It’s too early to tell, but for Anaïs Marshall, all oases have their own way of adapting to globalization. “What I have observed in Peru since 2003 is that agro-exporting companies have not necessarily remained over the long term, whereas the small farmers have. They adapt locally, they change crops… In my opinion, those pragmatic farmers should be an example for finding sustainable solutions.”

Opinion
How to Fight Deforestation in the Amazon?